We’re big fans of whiskey here. There’s an entire kitten devoted to where the whiskey comes from. Maybe you’ve noticed.

That’s why when Writers Tears (which bewilderingly doesn’t seem to have an apostrophe anywhere in it) was brought to my attention (thank you Laneia), I knew we had to share this with the queermo, whiskey-loving world.

Writers Tears is a pure pot still Irish Whiskey, meaning it’s made with both malted and unmalted barley. According to the Writers Tears website:

Pure Pot still came about in 1802 as a reaction to the introduction of Tax’s by the British on Irish Malt Whiskey. Irish Whiskey accounted for 90% of all the worlds exported whiskey and was seen as a cash cow by the British. By introducing this tax they hoped to “Cash in” on their neighbors good fortune. However in an effort to avoid taxes the Irish Distiller decided to use a higher percentage of unmalted barley (as opposed to Malted Barley) into the still.

This style of Irish Whiskey gained in popularity, earning the title “the Champagne of Irish Whiskey.” What does this mean it tastes like? I’m not sure, as I know more about champagne than Irish Whiskey. But according to several reviews, like this one and this one here, and also the tasting notes, you can hope to taste: 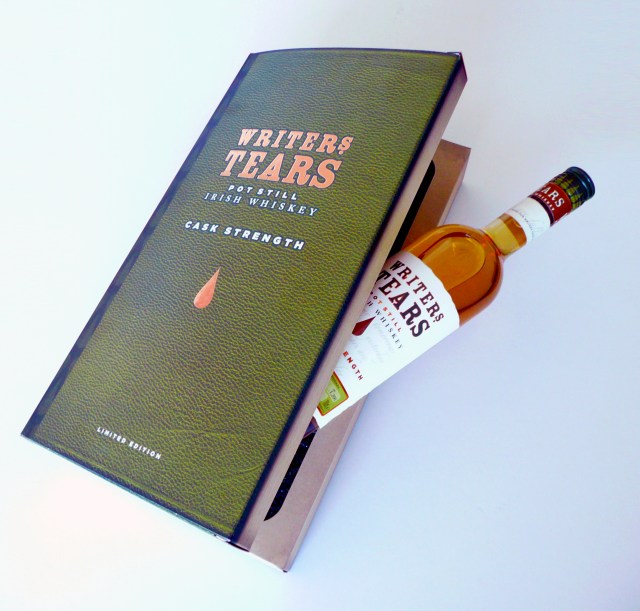 And on one thing everyone can agree: it’s amazing Irish Whiskey, the best you can buy at that price point (38 euro). So basically, it sounds fucking delicious.

According to Jim Murray’s Whisky Bible:

There is a wonderfully Irish irony that a whisky dedicated to Ireland’s extraordinary literary heritage should be represented by a label, even a brand name, so punctually inept; it’s almost brilliant. The reason for the Writers(sic) Tears, if from the spirits of James Joyce, Samuel Beckett, George Bernard Shaw, Oscar Wilde and perhaps even Maurice Walsh, whose grandson became a legendary blender at Irish Distillers, will be open to debate: we will never know whether they laughed or cried.

Yes, I’m team picking it because I, as a writer, cry a lot of tears. And those tears are often paired with whiskey. And I like both Irish writers and Irish Whiskey. This is basically two of my favorite things: nice, smooth liquor and literature. I’d like to drink this whiskey and read a lot of books, together at the same time. So yes, the name caught my attention first, and I think the name is just the bestest. But unfortunately for me it’s not available in the US just yet. Which means that I am left with only one question:

Which of our readers in Ireland would be willing to send me a bottle? [Ed. note: Me too?]