Hello, hi, how are you? Gay? Feeling gay at all today? Cause just saying, so is Lindsay. Apparently Pride week is like a hormonal thing, it’s in the air and makes us do extra gay stuff like how pollen makes you sneeze, even if we are celebrities whose publicists have advised us to say that we’re basically straight. Reader Anna had a particularly sharp eye and noticed this series of tweets that Lindsay has apparently since deleted: 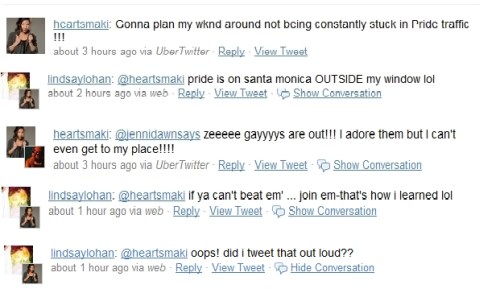 A little gay, no? Yes? Maybe? Ok well if that’s not working for you, how about some photos of her at the, um, “Muscle Milk Light Women’s Fitness Retreat,” which is apparently a thing. She looks, I’m going to say it, really fucking gay, and coincidentally exactly like this really bizarre ad for women’s personal trainers near my house. I don’t know what that means. ANYHOW here’s Lilo wearing a sports bra, you’re welcome. Happy Pride. (@ohnotheydidnt) 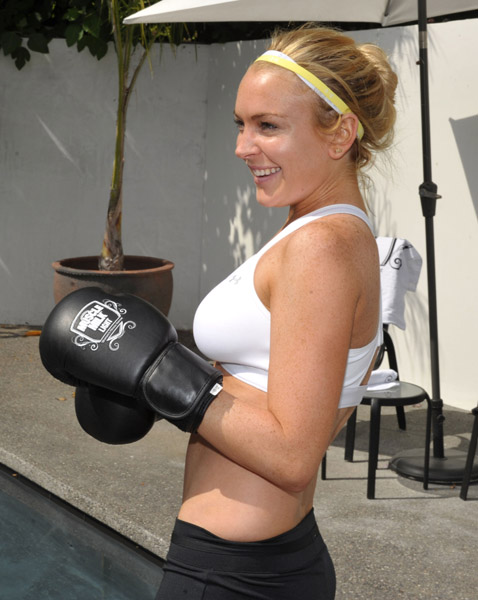 I personally hate this woman like nothing else, so it’s nice to have a major media outlet agree with me that Katy Perry is crazy and annoying. “…took what sure looked like a swipe at the competition, tweeting that “using blasphemy as entertainment is as cheap as a comedian telling a fart joke.”

Why, whomever could you be referring to, California Gurl? Your husband-to-be Russell Brand, who dressed up as Osama bin Laden — on Sept. 12, 2001? …Perry, who started her career as a Christian singer before turning poster girl for the bi-curious with her hit “I Kissed a Girl,” is the daughter of two Christian ministers.” (@salon)

We all miss Rue McClanahan, but, um, at least she had a really awesome apartment? Full of “sexy secrets?” (@jezebel)

If you are rich and hate DADT, here are the tshirts for you! (@queerty)

Massachusetts Governor Deval Patrick and his gay daughter Katherine marched in Boston’s Pride parade on Saturday, which was awesome. Speaking of Boston Pride, are you going to the Dyke Block Party or whatever tonight, if so, say hi to Rachel! (@zimbio)

Kelly & Sharon Osbourne, the Grand Marshals of Sunday’s West Hollywood Gay Pride Parade, stood their ground when some angry homophobic protesters got up in their grill about being sinful etc. Sharon told them they ought to be ashamed of themselves, right before Kelly jumped on the mic and led the crowd in a “God loves the Gays” chant. (@radar)

In case you weren’t feeling AWESOME about being gay yet this week, maybe check out this video, which reveals that lesbians are actually sweet-ass vampire ninja hybrids. You’re welcome.