I have been writing a love letter in my heart to Life is Strange: Before the Storm for months. Since hopping trains with Rachel and trying to figure out exactly why she likes us. Since playing Therapist in a broken down truck with Rachel, trying to figure out exactly how she likes us. Since rewriting Shakespeare and then kissing under streetlights, stopping time without even needing Max’s superpowers. Or maybe just stopping my heart. I don’t know. I just know that the first two episodes of this game put an ache in me that nothing else I played or watched in 2017 even came close to.

But the question I asked after Episode One was always hovering, and it’s up to Episode Three to answer it: Is this story as doomed as it seems it has to be, and is that a story we should allow ourselves to get invested in? I super wish I could tell you that the day was saved and everybody is okay or, most of all, that the story honored itself to the very end. I wish a lot of things, let me tell you. 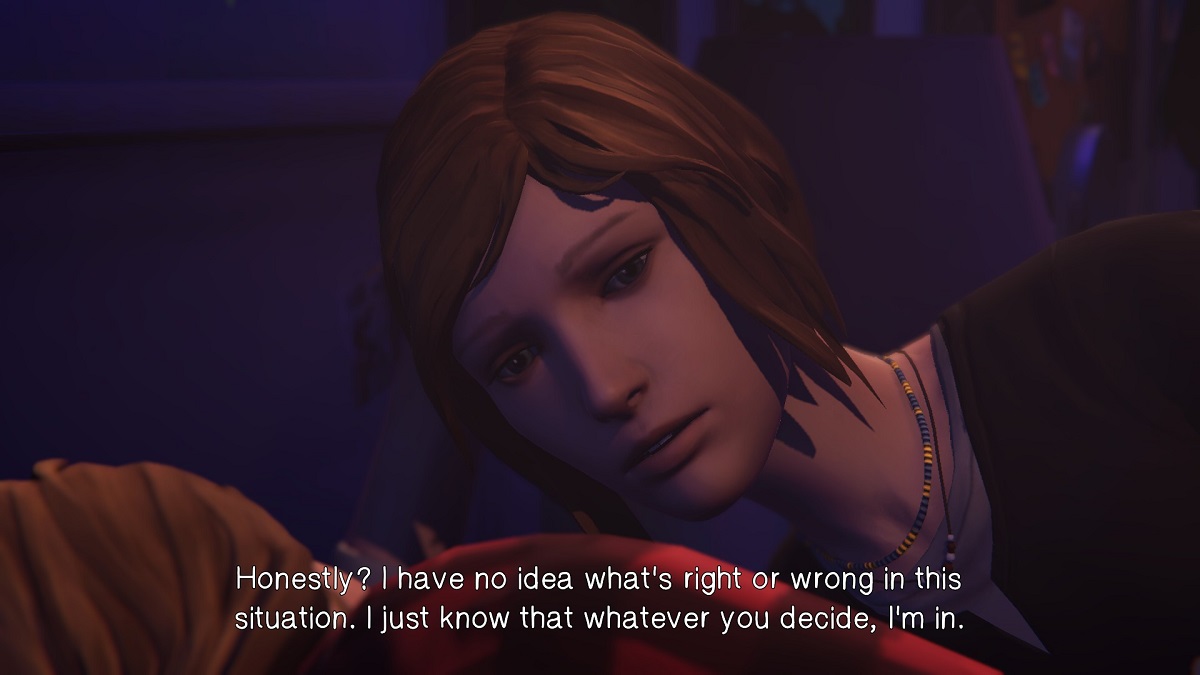 This article is going to contain heavy spoilers, right up to and including the end of the game. Because we need to talk about what happened here. It’s been out for two weeks, so I hope you’ve had enough time to play it by now, but if you haven’t: turn back now.

Episode Three picks up right where the previous episode let off: Chloe and Rachel have just learned that Rachel’s mother is not her birth mother, and her birth mother is, startlingly, the woman who looks exactly like Rachel who has been skulking around the edges of the game up until this point. We are immediately thrown into exactly not at all the kind of thing we play this game for: a flashback sequence from a man’s point of view. Rachel’s dad tells a weirdly detailed story about falling in love with Rachel’s birth mother in high school and the entire history of their relationship, in a sequence that seems to last one million years, culminating with the fact that Rachel’s birth mother is an addict and her dad kicked her out of their lives forever.

It’s a weird opening. Why are we getting the story fed to us by this man, when there has never been a trustworthy man in the entire history of this series? The story has never been the thing that matters, what matters is the way we see it. But then after this scene there is one of the tenderest scenes in the game, that made me hold my breath for an entire minute. And after that, a short perfect beat in the junkyard, where everything important always happens, and I forgot all about Rachel’s dumb dad and remembered why I love these games and especially why I love Chloe Price. 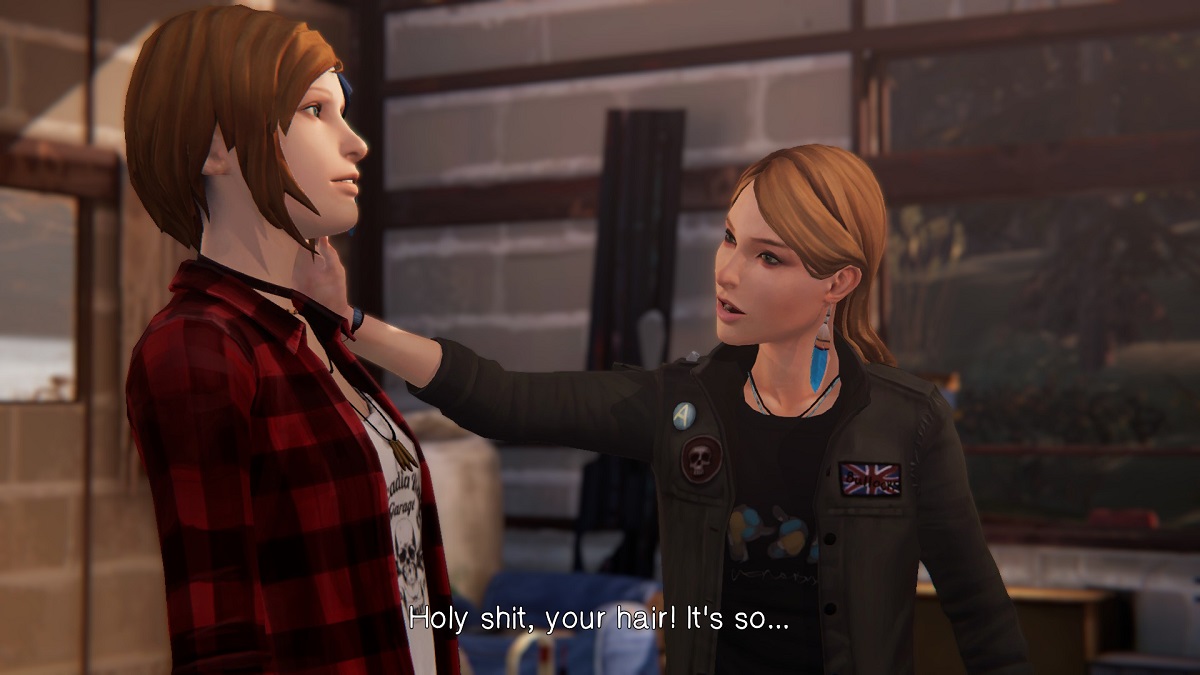 In which Chloe passes out because Rachel lightly touched her hair. Too Gay To Function.

And then everything goes terribly wrong. The plot becomes a tangled web of unlikely nonsense that wouldn’t work even if the pacing were at all reasonable, but it isn’t, so there you have it.

Do you want to know what happens in this game? I’m assuming you already know, but I’m going to tell you anyway because I have to let it out. Rachel decides she wants to meet her birth mother, who up until this point has been just sort of hanging out in the background of every scene so it shouldn’t be too much trouble, right? NOT RIGHT. Because The King Of All Drug Dealers gets mad about Rachel and Chloe “asking questions”, so Rachel hits him with a board? And then he stabs her? With a knife? And then Rachel is like “Wow, Chloe. Getting stabbed was a real wake up call. By which I mean, could you keep trying to do the thing that I just got myself stabbed for doing, one scant hour ago?” So Chloe goes to Rachel’s dad’s office and burns evidence because apparently he hired the drug dealer to kidnap Rachel’s birth mother for no good reason, which would be the most nonsense thing in the game except then a boy whose name I never bothered to even learn shows up and turns into a terrifying abusive monster, keeping Chloe hostage because Rachel Amber is apparently a bad person, according to this person right here right now causing a hostage situation. AND THEN. Chloe escapes, has a quick daydream about her dead father, then confronts the drug dealer who beats her up and doses Rachel’s birth mother with heroin, but not to kill her, just I guess to make her relapse? Which makes no sense because Rachel’s dad wants her out of the picture so why would he pay somebody to make her more unstable? (By the way, these three scenes in a row: finding out Rachel’s dad is a scumbag, dealing with Chloe’s stalker boy, and then the kingpin just being a comic book villain? I actually felt like this game was too mean to men! That is not a thing I have ever thought in my life. There are NO DECENT MEN IN ARCADIA BAY and it’s not even fun to joke about at this point.) 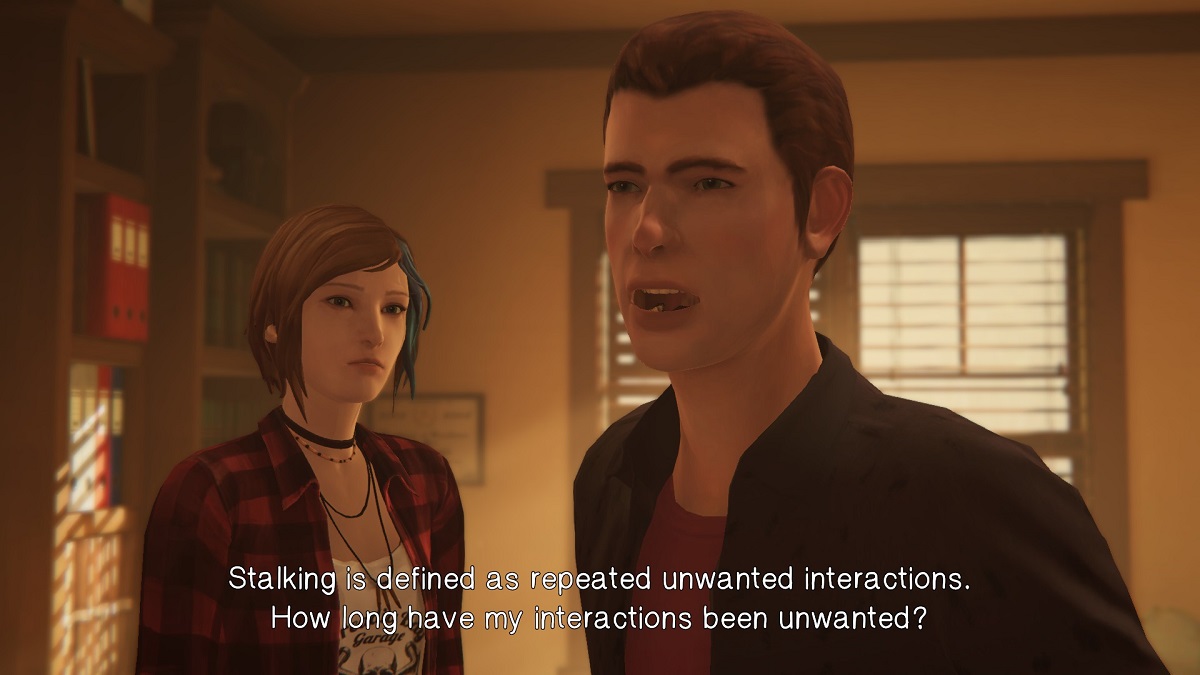 Literally no one ever asked you to be in this game, is how long.

After all that, Chloe wakes up and the drug dealers are gone but Rachel’s birth mother is still there and she for some reason makes it Chloe’s decision whether to tell Rachel that her father is evil trash. And then she just leaves. (Apparently you can get an ending where she doesnt leave, but I didn’t.)

The moral dilemma of that end choice feels so unearned and unrealistic. How would this ever be Chloe’s decision to make? In the first game, everything was Max’s fault so it made sense that she’s have to choose. But here, Chloe is just a kid being a kid. The only parent who has any business parenting Rachel is her adopted mother, who is completely forgotten in the drama of everything and whose voice actor for some reason sounded heavily sedated the few times she was actually allowed to speak in this episode. 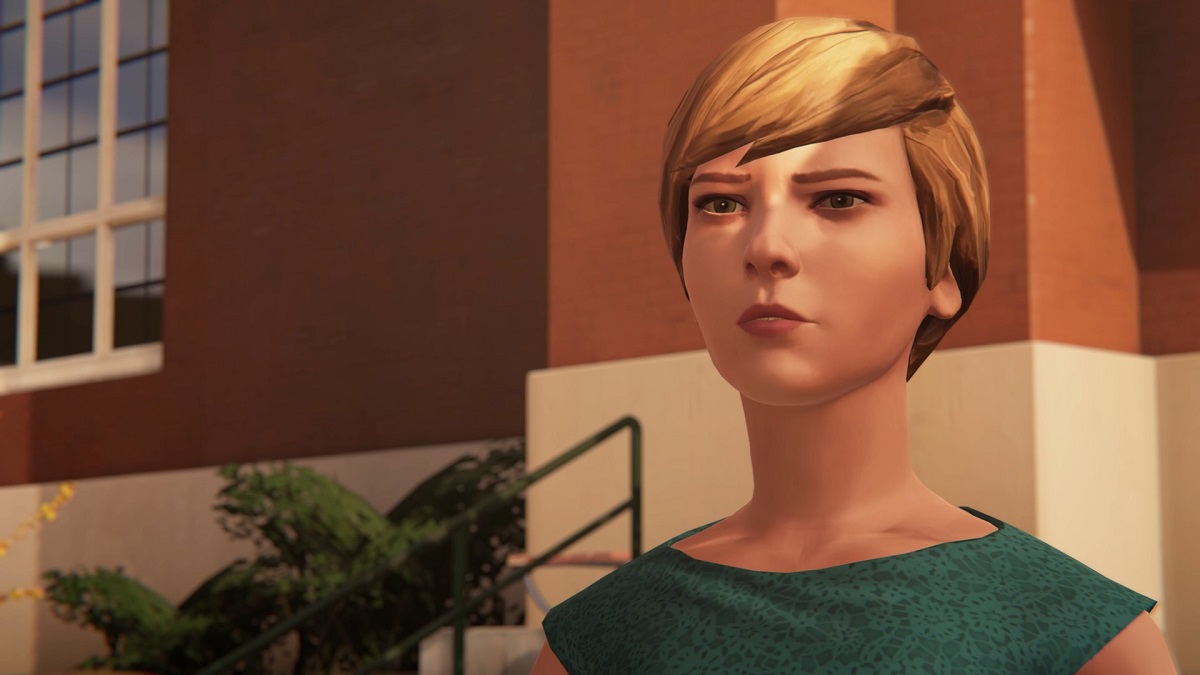 In lieu of a picture of Plot, please enjoy this picture of Victoria Chase.

The plot was so rushed and unbelievable that I honestly thought the scene with Rachel’s birth mother was another dream sequence like with Chloe’s dad until it just ended and that was that. It felt like they realized that they forgot to have plot in the first two episodes so they had to give it to us all at once, but really I don’t think I’m alone when I say that we didn’t really ask for plot in the first place in this game? The weakest point in episode one was the end, when Rachel lit the entire forest on fire doing her best Kylo Ren temper tantrum impression because of Plot. And the weakest part of episode two was the end, when Rachel broke her dining room table doing her second best Kylo Ren temper tantrum impression because of Plot. The big dramatic beats have always been so much less powerful than the quiet drama of just the fact of being sixteen years old and alive in the world. And this episode abandoned that quiet halfway through.

I feel really guilty about how cold I feel about this episode. I felt guilty at the end, when they gave us a montage of Chloe and Rachel, just being young and together. It was the best part of the episode, these girls in love in the sunshine, teasing each other and comparing their first tattoos and being people at the beginning of their own stories. It was beautiful, and I felt so guilty for having doubted them. And if the game had just ended right there I really think I would have left it feeling so much more kindly toward it. But it didn’t end right there. It ended on a shot of Rachel’s phone, ringing off the hook with calls from Chloe, on the cold stone of the bunker where we already know she dies. 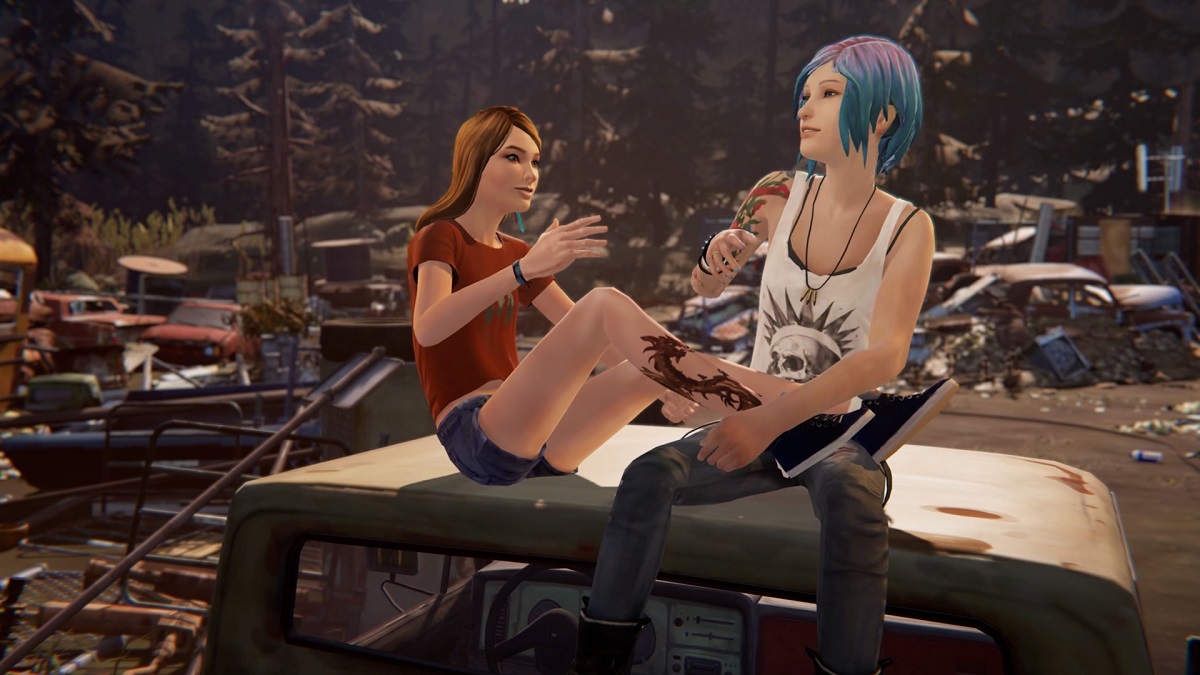 Turn the game off right here. That’s it. That’s the end.

I’m just so incredibly frustrated at this thing I love so much. That tag, completely unnecessary and unrelated to anything that happened in this game, changes the entire story. They were telling the story of Rachel and Chloe. A story of these very young people clawing their way to an imperfect life. They had dreams and wants and loves, and that’s the story that we needed and that’s the story that matters. This game was about Rachel Amber, a girl so alive that she basically brought Chloe Price back to life. This ending takes all of that person, all of that life, and reduces her back down to the Girl On The MIssing Person Posters. It makes her a prologue. And I’m so angry about it. 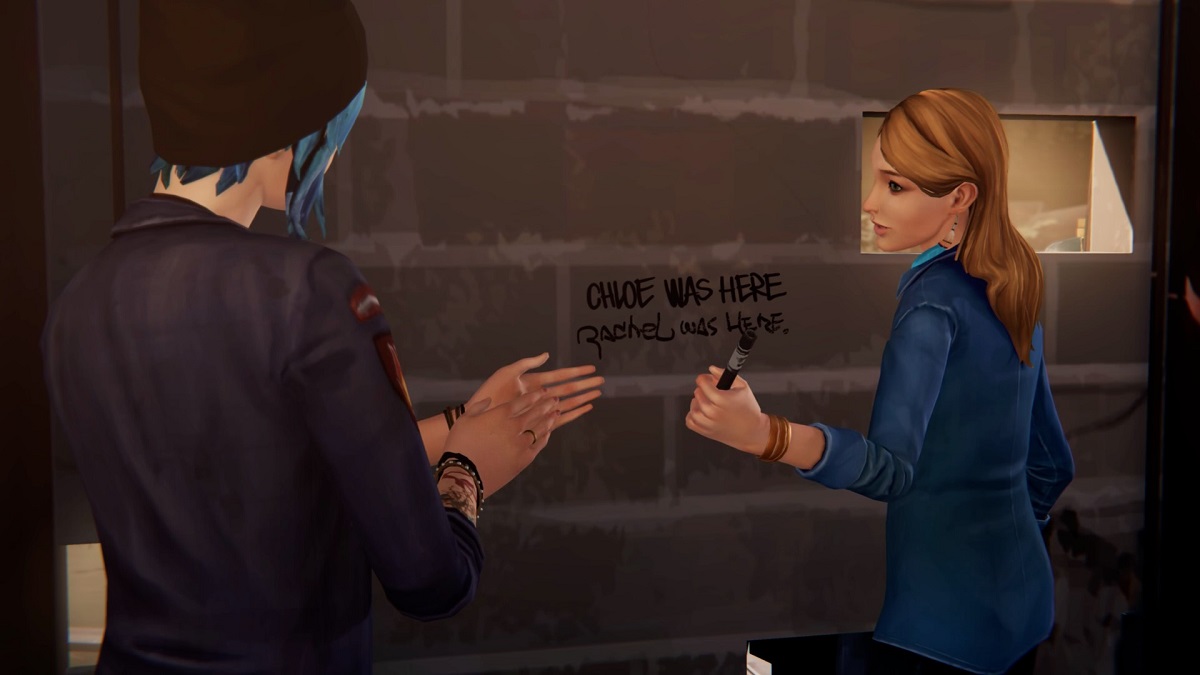 This is a very bad ending to a very good game. Even this episode had great scenes. The scene in Rachel’s room, in Rachel’s bed. Chloe’s hair and Chloe’s truck. Another great Dungeons and Dragons game with characters who I really wish could be Chloe’s friends forever. The insult of the ending isn’t enough, for me, to overshadow the beautiful things that came before it, but damn if they didn’t do their best to burn it all down. Most of all it makes me want to go back and play the first game, now with a fuller understanding of who Rachel was to Chloe. And it makes me want to save Chloe even harder than before. And it makes me more comfortable than ever in shipping Max and Victoria because Chloe belongs with Rachel, but I am also willing to entertain any polyamorous solution in which everybody lives and goes on to punish all of the terrible men who will apparently be forever hell-bent on ruining their lives.