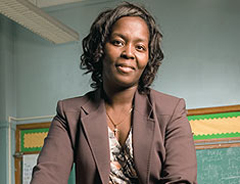 So! In Harlem, New York, there’s been a “sex scandal” of some sort, according to 565 newspapers. If you live in New York City you may have been greeted on your otherwise sunlight-soaked crossword-puzzling Sunday Morning with The New York Post’s tasteful headline: LEARNING A LEZZIN’. So cute. Get it? LEZZIN’? LOL. IT’S LIKE “LESSON” BUT GAY. And like, they’re “learning”? Like to not have a “lesbian affair”? And like, if you do? Want to have a lesbian affair? I would suggest that you keep it to yourself. Because if your ex threatens to kill you, you might get fired:

A principal in New York has been removed from her position after she revealed to her school board that she had been conducting a secret affair with her deputy principal.

A report into the incident revealed that the principal only brought up the liaison because her now ex-lover had allegedly threatened her.

Thank GOD that deputy principal threatened to kill the principal, otherwise the student body might not be aware that clambaking was happening within the walls of their school.  This isn’t Glee or something where Mr. Shue can bump/grind his Gleeksters and the gym teacher can marry the guidance counselor, this is REAL LIFE where two consenting adults over the age of 35 who work together never like each other or have sex. I mean come on. Who meets people at work when you could just meet people at Applebees AFTER WORK over a nice bowl of Santa Fe Chicken Salad. Seriously, I would marry that salad if I could marry a salad, which I imagine I could do in Iowa if I hadn’t already used my one free trip to the courthouse to marry my kitten.

Anyhow, this is what happened, but in different, more specific words:

A beloved Harlem principal was yanked from her post after she had a lesbian romance with an assistant principal – then gave her a lousy review, investigators said.

Crystal Simmons, founding principal of the Academy for Social Action, turned to officials for help after her former lover, Candy Jones, threatened to murder her, the special schools investigator’s office said in a report.

I know. It’s weird. Like if your ex-boyfriend threatened to kill you, do you think that you’d get fired, or do you think that people might be worried about that dude killing you? Like if he said he had a gun? Even if you were totally lying and made the whole thing up (but really why would you do that and risk losing your job, you know?), people might even be alarmed by the story, right, imagining the possibilities? They might take steps to protect you because the chance that you’re telling the truth is important.

[Sidenote: I can’t believe this woman’s name is Candy Jones. Have you ever heard of Candy Jones the model who says she was used as a guinea pig for mind control experiments executed by the CIA? Probably not. She was 6’4!]

Let’s talk about Crystal Simmons for a minute. Crystal is a bit of a “beacon of light” for her community and the founder of a school called The Academy of Social Action. This College Board-sponsored school focuses on college preparation and community service as it aims to “cultivate, educate, and graduate tomorrow’s leaders while inspiring them to shape the many communities in which they reside” and guides its students to “become college-bound family and community leaders who are concerned for the rights and welfare of others, socially responsible, and confident in their capacity to make a difference.”

Basically, Crystal Simmons is IN CHARGE OF EDUCATING CHILDREN WHICH IS THE MOST IMPORTANT JOB IN THE WORLD. And she’s good at it. And although it appears she engaged in sexual conduct on school property, which is bad bad bad and against the rules, the circumstances of this situation seem to hardly warrant an official firing. From The New York Post:

Students at the Academy for Social Action said they had no idea the two administrators were having an affair. About 60 of them protested Friday morning for Simmons’ return.

“I don’t why they would remove her for a personal reason,” said Raheim Cruz, a 10th grader from Harlem. “The school doesn’t want to answer any of our questions.”

Cruz said he did not know that Simmons and Jones had an affair during class hours.

“They did a good job of keeping it secret,” he said.

From The New York Daily News:

“Her main mission is college for everybody. We want her back,” said Kirsis Betances, 16, a 10th-grader, of the Bronx. “She showed she cared for everyone. …I told my daddy I’m leaving the school if she’s not there, and my daddy agrees with me.”

Added 10th-grader Destiny Tyler, 16, “She wasn’t a principal who sat behind a desk.”

Students were stunned by the racy allegations. A 17-year-old senior who described the principal as “a second mother” said she was “shocked” to learn of the sex scandal.

Apparently Crystal (she who is “embroiled in a sex scandal”) “emerged from hiding” on Saturday, though unfortunately for The New York Daily News, she “ducked questions about her lesbian romance with a fellow administrator.” Dammit. I was really wondering how many times they got to third base on school property. Learning a Lezzon hahahaha. Also, observe the usage of “hooked up” in an actual newspaper:

Crystal Simmons didn’t say a word as she rushed into her Bronx home a day after it was revealed that she hooked up with Academy for Social Action Assistant Principal Candy Jones.

The New York Post reports in “Manhattan Lesbian School Administrators May Be Fired Over On-the-Job Fling” that Simmons’ account has been collaborated:

According to the report, the school’s Community Associate Chante Alexander confirmed that Jones threatened to kill Simmons.

“Jones explained to Alexander that it was easy to purchase a gun down south and that her father had already purchased one for her,” the report said. “Jones also informed Alexander that she had spoken with her sister about caring for her son if something were to happen.”

More importantly (via The Gothamist):

“We are currently seeking to terminate both Principal Simmons and Assistant Principal Jones,” for conduct believed to include sex during school hours, said DOE spokeswoman Barbara Morgan. But what do Principal Crystal Simmons’ current and former husbands think?

THAT IS THE SAME EXACT THOUGHT I HAD!!?!!?! Omg. When I read “a hail of firing requests and death threats” in that same article, my mind was already POLE VAULTING into “what do Principal Crystal Simmons’ current and former husbands think?” Because you know. It’s straight dudes that run the world and call the shots, so let’s go find them and find out how they feel. I thought men didn’t have feelings, but really, that’s neither here nor there at this point.

“They were on school property when they were doing whatever but I don’t want anybody to lose their job,” said Lilly, an NYPD cop. “The economy’s terrible right now.”

“She’s a successful black woman,” added Lilly. “I’m proud of everything she accomplished.

In other news, not a single news outlet seems to have any issue with the way they are reporting this story. That astounded me most of all/made me question if I am actually insane.

I should go to bed before my hangover starts. Happy Monday!