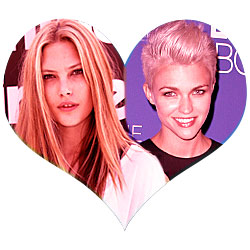 Catherine McNeil and Ruby Rose Are Engaged! Ruby Rose, the Australian VJ and TV personality with alternative hair and a brave, activist personality, is getting married to mega-hottie Catherine McNeil. That’s lovely. They are both very very good looking and hopefully will do some nude pictorials.

Fun fact — Ruby, who has been out since she was 12, first came into the public eye in 2002 when she came in second in a Girlfriend teen model search. Who took first place? Catherine. Lesbians don’t just eat their own, ladies & gents, they eat OUT their own. (@ny mag)

UPDATE 5:00 PM: Regardless of whether or not it is true, and despite a great deal of reporting on the topic — Ruby Rose has not confirmed that she is engaged to Catherine McNeil after all. According to our Australian Music Editor, who just woke up, stories about Ruby Rose being engaged break monthly over there.

Here’s a rundown of how this happened:

– Aside from New York Magazine and Digital Spy and 20 other places, The Huffington Post reported: Catherine McNeil & Ruby Rose Engaged: Confirmed!
– They got it from the Australian Herald-Sun: “It may have been one of the worst kept secrets in showbiz but TV host Ruby Rose has finally confirmed she is engaged to her supermodel girlfriend Catherine McNeil” and it is also reported by the News.com.au.
– The Australian Herald-Sun passes the buck to Womans Day… without a link. Doesn’t make sense that it would be this American Woman’s Day, unless Ruby already had her casserole recipe planned for the bridal shower.
– We have found Australian Woman’s Day but um, nothing comes up for a Ruby Rose search.
– The Australian Herald-Sun later reports that Ruby Rose is mad at Womans Day
– So maybe it was in the print version of the magazine which is unlikely.
– Although we’re interested in how rumors start on the internet, we’re not interested enough in Ruby Rose’s personal life to continue tracking down this beast. So that’s that! False alarm! You still have a chance to marry Ruby Rose JK GAY MARRIAGE ISN’T LEGAL SUCKERRSSSSSS

LESBIAN LEFT-WING TWITTER WARS:
No it’s not us this time! Scott Baio is mad at feminist blog Jezebel, and like everyone who’s ever gotten mad at Jezebel, the best thing he can come up with is to call them a bunch of radical lesbian left-wingers:

And then Mama Baio, Mrs. Charles in Charge, Renee The Wife got involved. She bravely took to her facebook page to stick up for her man. “F***kYOU Jezebel.com web rag!!!! You bunch of FAR LEFT Lesbian shitasses!!!!!!! No wonder you’re all lesbos because what man in his right mind could put up with your cuntess? Scott Baio has more class in his piss than all of you all!!!” 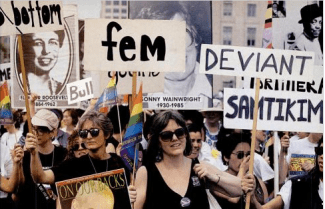 Basically, the story begins when Jezebel published a tweet from Baio in which he complained about having to pay taxes for all the lazy unemployeds in their daily Twitter round-up, Tweetbeat, and he got really upset about it and said some unfriendly things. At some point, his wife posted this on facebook:

Isn’t it neat that in 2010, relatively conscious human beings are still confusing feminists with lesbians? I mean, as far as we can tell from reading Jezebel every day, none of their editors or major contributing writers identify as queer [male contributor Rich Juzwiak is gay]*. Does Scott Baio look at Jezebel and think, “oh, women who are talking about things besides pubic hair trimming and blow-job giving, must be lesbians!”?

*We’re not complaining. You don’t have to be queer to rep the queer perspective, and obvs if Jezebel had a lesbian writer, Riese would die of jealousy that it wasn’t her, after complaining a lot about how she needs a mentor to help her grow/edit, and then we’d have a dead editor-in-chief. And then what, you know? Anarchy.

“The insurance industry cares about making money, and it doesn’t really care how,” says the senior author of the study, J. Wesley Boyd, M.D., an assistant clinical professor of psychiatry at Harvard Medical School, in Boston. “They will invest in products that contribute to significant morbidity and mortality if doing so is going to make money.”

Boyd and his colleagues used a database that draws on financial filings and news reports to estimate the fast-food investments of the 11 companies. Their findings appear in the American Journal of Public Health.(@cnn)

MEDICAL MARIJUANA:
Slate has a testimonial from a mom in Rhode Isand who uses medical marijuana to manage her son’s autism. She and her husband started giving their son cannabis to make him happier and more sociable. They tried it out for six months and thought it worked wonders. Then, after all this affirmative news and a beautiful summer, we hit a snag. But from it, we learned an awful lot about what the cannabis is doing for J. (@slate)

Riese Special Comment: This is one of the most wonderful things I read on the internet this week. Just read the whole thing and get back to me on it.

EDITING:
Can a gay person edit an anti-gay book? What if you had be the editor on Glenn Beck’s new book? Gay City News looked into those questions and then wrote this article about gay editors:

The gay-baiting drew howls of laughter.

Mitchell Ivers, the openly gay editor at Simon & Schuster who handled Mattera’s book, would probably cringe. Mattera is not the only right-wing author on Ivers’ list. He has edited books by Glenn Beck, Mark Levin, David Kupelian, and other conservatives who, like Mattera, are not the leading anti-gay voices on the American right, but are certainly part of the chorus.

One guy in the article accuses gay editors of conservative books of ignoring “the harm caused by them and the fact that those messages are carried to a wide audience.” At what point are these editors doing wrong instead of just doing their job? (@gaycitynews)

DOMESTIC VIOLENCE:
Abuse is just as big of a problem in gay relationships as straight ones, but it doesn’t always get the same amount of attention. So it’s nice to see that the American Bar Association has released a “tool kit for LGBT victims of abuse and their attorneys.” (@about)
MARRIAGE:
Pam Spaulding of Pam’s House Blend has a few things to say about being out — as a married couple. Pam has been married for over a year, but still has a hard time calling her s.o. her “wife” in front of other people. But she has some really good points about why she should just get over it already and say wife a lot.

My use of that one single word can transmit so much information, open so many conversational possibilities and normalize the fact of married gay and lesbian couples, that I am disappointed in myself when I hesitate and let the opportunity slip by. (@pam’shouseblend)

BULLYING:
We’ve seen a lot of examples of excessive bullying lately. From Constance McMillen to Phoebe Prince, bullying has become a huge problem. Obvs the bullies themselves are the main problem, but as Queerty points out, we’re also seeing a lot of cases where parents are failing, too. They either aren’t listening to their kids or aren’t discouraging this kind of behavior. The parents at McMillen’s high school helped pull off the fake prom scheme, after all. (@queerty)