A lesbian couple in North Carolina were just about to leave The Sting Ray Cafe when Ed McGovern, its owner, hand-delivered them a letter he’d been asked to send them by God. The letter, delivered to Arielle and Shawnee McPhail on their way out of the New Bern restaurant, was riddled with misspellings but nonetheless conveyed the Lord’s message: that homosexuality is against God’s will. 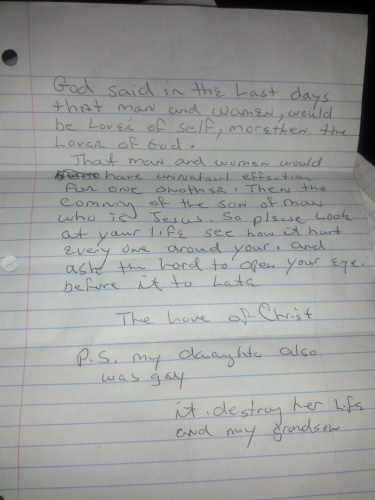 God said in the last days that man and wom[a]n would be lover of self, more [than] the lover of God.

That man and woman would have unnatural [affection] for one another. Then, the coming of the Son of Man, who is Jesus. So please, look at your life. See how it hurt[s] everyone around you. And ask the Lord to open your eye[s] before it [is] to[o] late.

The Love of Christ

P.S. my daughter also was gay. It destroy[ed] her life and my grandson.

McGovern admits to writing and delivering the letter “out of love,” and once delivered a similar letter to another couple. He claims he was summoned to scribe on The Lord’s behalf when he saw the two women kissing outside of the restaurant, although the couple denies having done anything more than hold hands – and feel that no matter what form their affection took, the action taken by McGovern was “inappropriate and offensive.”

The general population seems to agree; many have taken to Yelp! to express their dissatisfaction with McGovern’s overall life choices, publishing reviews ranging in thesis from “boo to you Hate Cafe” to “attend at your own peril,” and including smartass gems like “hopefully their god can explain why they’ll be out of business soon.” The Sting Ray Cafe’s average rating on the site is now 1 star, and most of the 168 reviews are negative.

“no thanks,” wrote Derek M. “i don’t like homophobia with my hush puppies.”