Since 2018, the Autostraddle TV Awards has been designed to recognize and celebrate the very best of queer television — the television shows, writers, makers, and performers who might otherwise be overlooked by mainstream institutions like the Emmys.

Evaluating the best of our stories is a job that the Autostraddle TV Team, a group of eight queer television and film critics amassing together years in the industry, takes seriously — it’s not enough to only feature a surface level gay character on television anymore. We look to honor complex, meaningful, fully developed queer storylines and performances across all genres. In our voting process, we also solicit votes from our readers, because we believe that queer storytelling should connect directly with queer audiences. Now in our fifth year, the Autostraddle TV Awards may not have an in-person ceremony, but when so many other awards continue to overlook groundbreaking LGBTQ+ series and performances, we hope to shine light on queer creators in this industry who deserve to have their work recognized.

Which is why we were so moved today to see that Javicia Leslie, lead actor of the CW’s Batwoman, which ended earlier this year after three seasons, take the spirit of our awards to heart! Dressed to the nines in a burgundy gown from the comfort of a living room, and using an amethyst crystal as a makeshift trophy (talk about gay), she filmed a full acceptance speech for her multiple Autostraddle TV Award wins.

Leslie, who is bisexual, created the role of Ryan Wilder over Batwoman’s second and third seasons, embodying the first lead Black lesbian superhero on television with signature wit, charisma, and impeccable range. With Leslie at the helm, for the past two years Batwoman received a clean sweep of all Sci-Fi/Fantasy categories (outstanding series, outstanding lead actor playing an LGBTQ+ character — Leslie; supporting actor playing an LGBTQ+ character — Megan Tandy as Sophie Moore; and performance by an LGBTQ+ actor — also to Leslie). It was also a runner up for Outstanding Episode with LGBTQ+ Themes for episode 311, “Broken Toys.”

In her acceptance speech, Leslie thanked Autostraddle, “I didn’t expect this, thank you guys so much. This is so dope. Shout out to Autostraddle for always holding us down, always seeing us, and I’m not just talking about Batwoman, I’m talking about all of us that are in our community, out here trying to tell authentic stories. I thank you so much. I honor you and appreciate you.”

She then thanked her mama (Black girls, I love us so much) for surrounding her in protection, abundance, and light. She also thanked her fans, the cast and crew of Batwoman. And yes, we are so grateful that Javicia Leslie took time to share some love back to our small team, but also it’s about something so much bigger — it is about all of us. Our stories, the ones that creep deep inside us and light a candle, the ones that other people may not see the value or importance of, the hours that go into the craft, because it’s not straight. It’s not cis. It’s not white. But we do, and that’s what matters. We don’t have to look to straight, white, cis institutions to give merit and value to our stories. We get to do that on our own.

Sepideh Moafi, The L Word: Generation Q’s Gigi Ghorbani, winner of Outstanding Supporting Actor Playing an LGBTQ+ Character in a Drama, also took to her Instagram today to celebrate her award win. In it was a screenshot of one of our writers, Drew Gregory’s, words honoring her performance. As Gigi, Sepideh Moafi’s performance has captured lightning in a bottle. We get to decide what’s important and create our own little bit of magic.

In addition to wins from Javicia Leslie and Sepideh Moafi, other actors and talent celebrated their nominations for the fifth annual Autostraddle TV Awards. Every year that we’ve mounted these awards, we are always so grateful to see nominees share their excitement, but I have to say — this year the engagement surpassed even our own expectations.

It means so much to see the TV Awards, created to take seriously the work that goes into queer storytelling, being honored by queer talent. It’s a reminder that sometimes we really do have to do it for ourselves, because if not, who else will? And that awards that come directly from within the community they are meant to serve, queer audiences, don’t have to come with trophies to be meaningful. (Though we are seriously working on trophies for next year!)

We’ve been rounding these up in our virtual office — and you may have seen these shout outs across our social media over the last few weeks — but we wanted to share them all with you.

Thank you so much for this recognition @autostraddle 🤍 https://t.co/MUZmoJeMf9

These noms are so nice @autostraddle thank you 🙂 https://t.co/2whDPJ6ZSJ

Any time my name is on a list with these guys, it’s one hell of a day. This is very cool. Thanks @autostraddle!

We love to see it. https://t.co/UIopJaMEPX 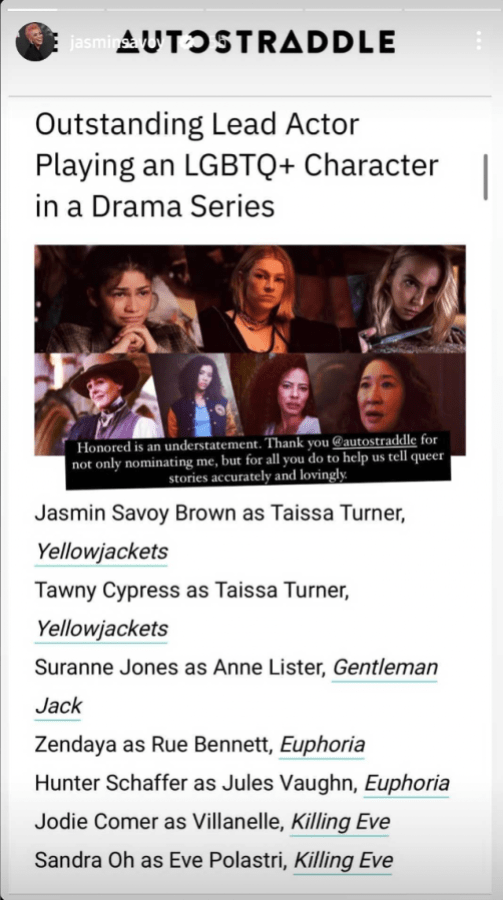 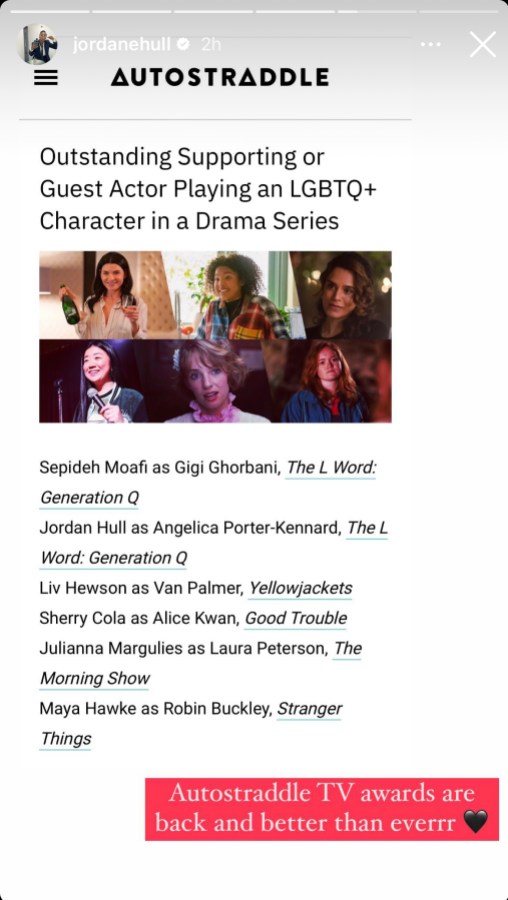 On behalf of all the queer TV/Film critics behind the Autostraddle TV Awards — we are so honored that our annual awards, created out of a deep love for LGBT storytelling on television, is being met in return with an abundance of joy and care by the very artists whose work make our stories come alive.

Read about all of our winners! Celebrate our queer television! We’ll keep this article updated with any new social media posts as they become available. Congratulations to all the nominees and winners! Thank you for making television that matters.