Hello and welcome to this recap of Legends of Tomorrow season 7, episode 9, “Lowest Common Demoninator” aka the one where the real Legends get TOO real.

Previously on Legends of Tomorrow, Evil Gideon created a group of androids in the Legends’ image to destroy them, so the real Legends kidnapped the father of time travel and used his very first time machine to quantum leap to safety.

We open this week in said safe space, and it’s the pocket dimension version of the mansion. The problem is, since they didn’t get in with the key, it’s not linked to a time or place on the material plane, so they are trapped in the hell dimension. They’re mad that Gideon brought them here when they said “home” instead of back to 2022, but they can’t have her fix it right now because her human body has a human fever. They all storm off to come up with a plan to stop Evil Gideon and the RoboLegends (band name, called it), leaving Gideon to wring her hands about doing a bad job.

With everyone distracted, no one explains to Davies where exactly they are, so when he follows familiar voices and opens the front door, he is quite alarmed to find that they are, quite literally, in hell.

Captain Ava Sharpe immediately marches to the kitchen to make a new murder board to figure out what to do next. 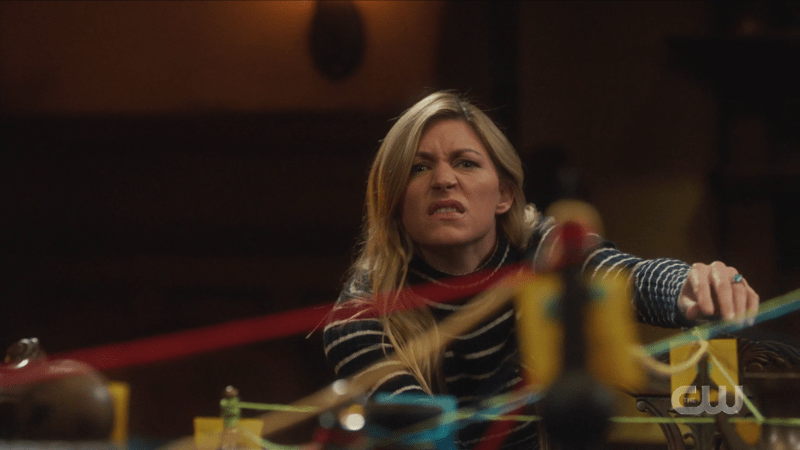 I would watch a reality show that was just live footage of the Legends cast behind the scenes.

Sara asks the team to start brainstorming ideas, because for the first time in a long time, there’s no clear path forward, and they don’t have their supercomputer AI to help them.

Speaking of their AI, Gary goes to check on Gideon, who is confused as to why everyone is so upset. She thought she was doing the right thing. Gary comforts her and Gideon decides that one thing that will make her feel better is if they use their human bodies in a way that humans do, so they head on upstairs. 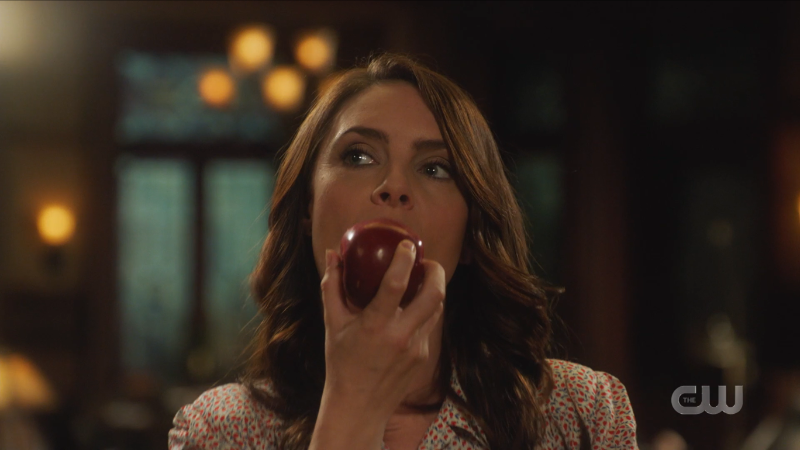 You’re adorable and I’m gonna let you finish, but Natalie Dormer did the best apple bite of all time.

Behrad comes to Nate and Fancy Zari and says that he has stopped being high and has a sense of clarity and realizes that he really likes Astra and wants to ask her out. They tell him to be his normal chill self and that it will go well, and when he leaves they’re really proud of themselves like an aunt and uncle who managed to not kill a kid on their first babysitting gig. Nate calls Zari a “time bro-ette” and she basically says “thanks I hate it” because Zaris in any form continue to be THE best.

By the time the Legends finally realize that Davies is decidedly Not Okay about the concept of being in a hell dimension, it’s too late, the door has been open. All the lights go out and Astra knows something hellish is afoot. 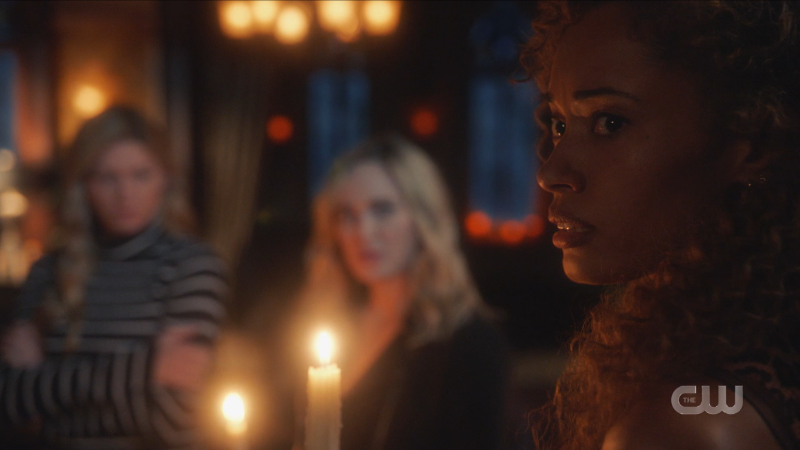 I’d watch Ghost Adventures again if these three took over.

Sara is annoyed because now they have a side quest no one asked for, and Ava is pretty sure they can’t fight Evil Gideon if they are possessed by some kind of devil spawn so they get to work trying to figure out what might have happened and how to stop it. 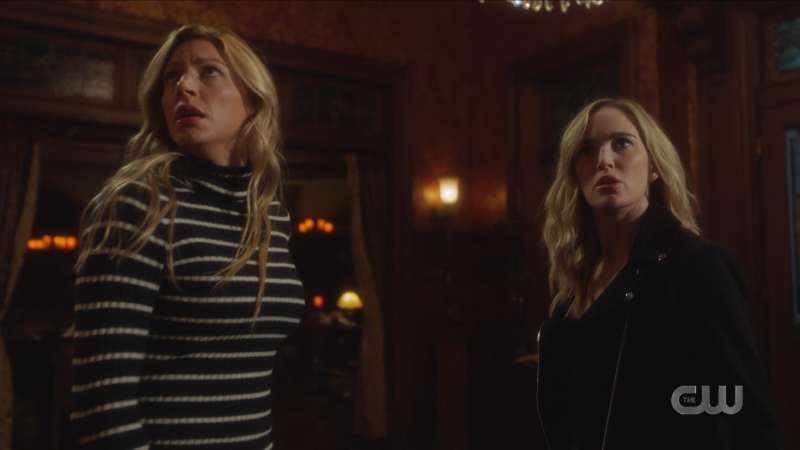 Too bad this didn’t turn into Naked & Afraid.

Nate and Fancy Zari are sweeping for signs of ghouls together when paint falls on them and they have to take their shirts off, causing a spark of sexual tension because Nate replaces his shirt with Constantine’s and Fancy Zari looks a lot like Flannel Zari without a shirt on. The camera starts to move around like it’s strapped to a Jersey man’s shoulder and it’s clear that something hinky is going on.

Ava keeps prodding at Sara to help her come up with a plan, but Sara is, in a word, exhausted. Between the alien invasion, getting stuck in the 20s, surviving Chernobyl, watching Bishop die, and now whatever is going on now all while being chased by an evil version of the only constant she’s had in her life since she got on this Beebo-forsaken ship…she’s at capacity.

And Ava gets it but she’s tired too and they have a job to do and grown children to herd so they have to just keep going. And unfortunately they keep going right into Gary and Gideon’s room, where they scream upon realizing all three of Gary’s nipples are exposed. 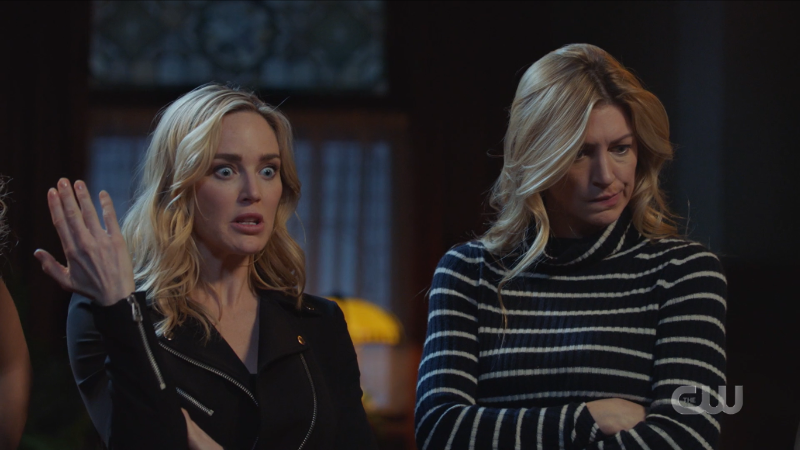 The rest of the team runs in to see what all the screaming is about, and in turn all scream upon seeing Gary’s ex-evil extra appendage, and Astra is ready to murder Gary and asks questions later until Gideon reassures her that not only was this whole thing consensual, but it was her idea. Sara and Ava blame Gideon’s recent misfires on this relationship and storm out.

When they realize all this tension and chaos feels a bit familiar to those of them who are familiar with the Bravo network, Astra realizes exactly what’s going on. She uses magic to show the Legends that they’re being haunted by a cursed crew; they sold their souls to make a good show so now they’re cursed to do ghosty mayhem, forced to film until they capture something real, something authentic.

And just like real producers and crew members on real reality shows (or at least, my understanding of them based on the show Unreal which is the closest I’ve come to watching a reality show since 2011), they are able to nudge and manipulate people and emotions to amplify any budding conflict. Astra knows exactly who is behind this, so she storms off to talk to a man named Harris, demanding everyone else stay put and not turn on each other.

Fancy Zari is sure she can handle this, since she grew up on Keeping Up with the Terazis aka KUWT (appropriately pronounced “cute”) in which Behrad was eventually recast like a teen boy getting his head swapped on an ABC Family show. 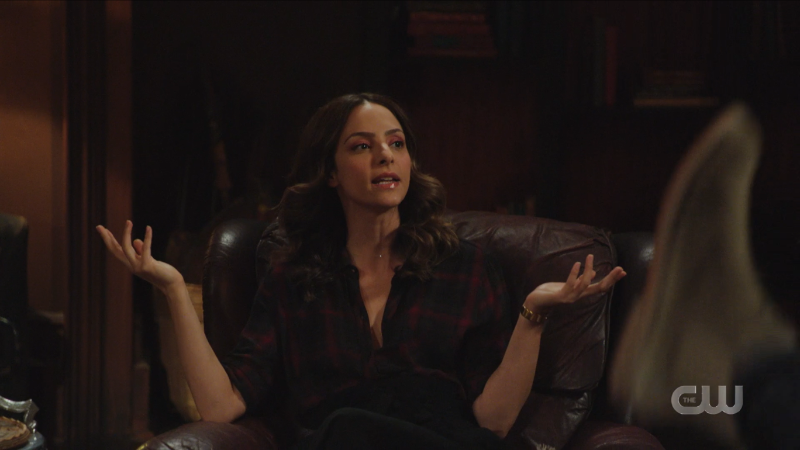 “What? It worked for New Face Jason on Pretty Little Liars. It’s not like I made him to get an Extreme Makeover.”

Davies pulls Spooner aside and asks what exactly TV is and how “reality TV’ is different, and the only experience Spooner has with it is Survivor so she immediately starts forming alliances and thinking strategy.

Ava still wants to come up with a plan, but as Sara absent-mindedly puts on some earrings that have magically appeared, she starts to whine about how she’d rather go on vacation. 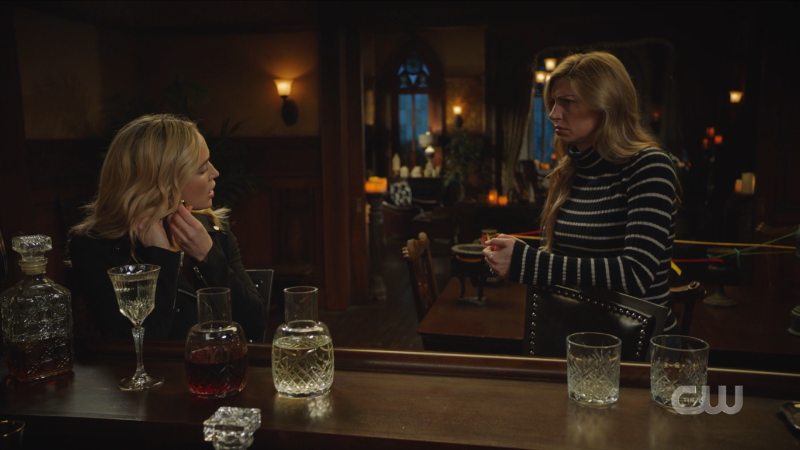 I’ll be honest, I don’t even think I could watch a Real Housewives if it was all queer couples. (No shade though; I’m happy it brings so many people joy.)

She tries to entice Ava with the promise of personal chefs and hers & hers massages, but Ava is really trying to stay on task here.

Meanwhile, Fancy Zari and Nate make a pact to never fight and IMMEDIATELY break that pact, because Nate took it too far. 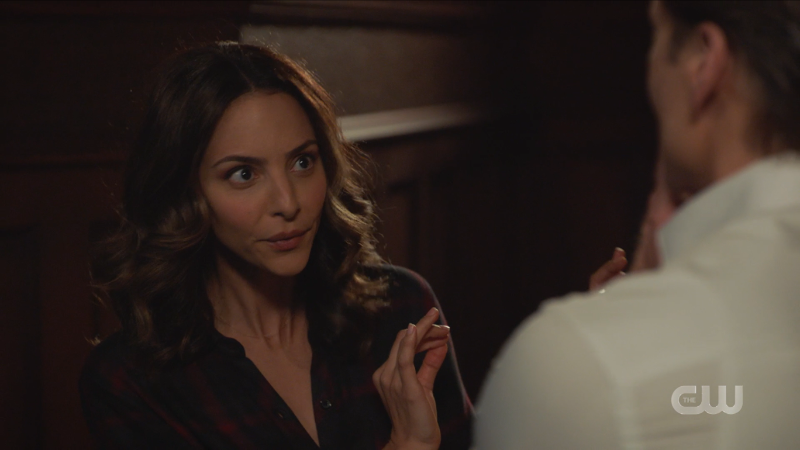 Davies goes to find Sara, annoyed that she hasn’t kept up her end of the bargain yet, and Sara is too busy changing all of the sticky notes on Ava’s murderboard into notes of fancy things she wants to worry about him, so she uses one of the post-its as a “get-one-soul-out-of-the-timeline free” card and gives it to Davies. As her hand position and flippant aire gets a little bit Alexis Rose, I can’t help but wonder if this is the Sara Lance that would have come to be if the Queen’s Gambit never crashed that fateful night.

Davies find Spooner again and she has taken her Survivor strategy to the next level and she is…completely naked. To psych out her competition. 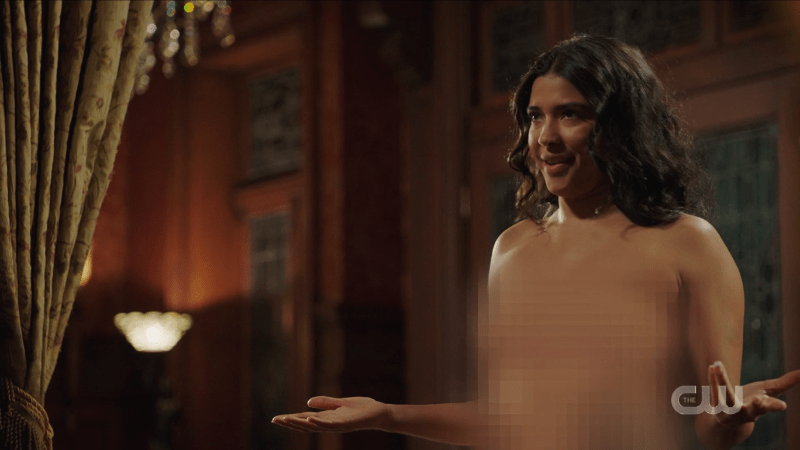 Astra dresses up in her Queen-of-Hell finest and struts to talk to Harris, who I’ve decided is named after Xander because he, too, is a terrible manbaby. 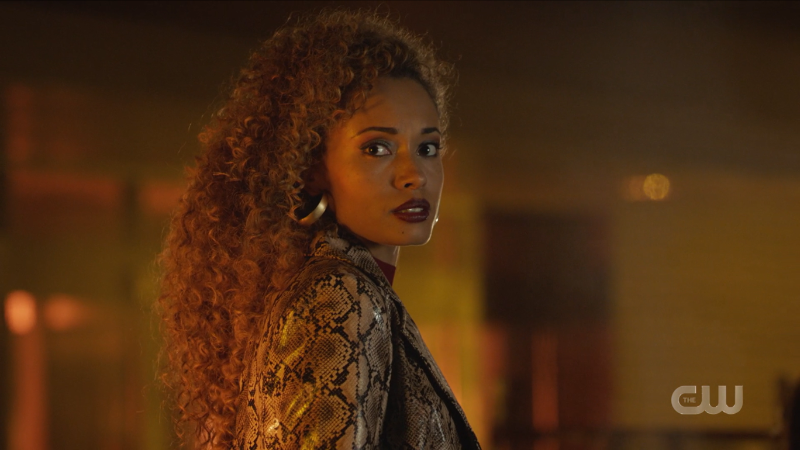 Where’s my handbasket? On my way!

Harris sucks a lot and has the audacity to tell Astra she looks BAD, which isn’t even good negging because it’s just categorically false. He tells her he’s enjoying the Legends’ reality show, even though they sort of lost the plot right out the gate, but Astra snarls that those are her souls and he should back the fuck off. He has a lot of respect for the work she did here in hell and is going to give in to her, but Behrad didn’t listen to Astra when she told him to stand down, and he got caught by guards.

Behrad starts to “defend” Astra by calling her good and caring despite Astra hissing at him to stop “helping” and Harris realizes that she’s gone soft and threatens Behrad. When Harris searches Behrad and realizes he really is a good guy down to his core, he decides that’s boring and lets them go, but he’s keeping the show going, now with the added twist of Astra and Behrad being trapped in a room together in the LCD studios.