Well hello there! I don’t know about you, but I’m feeling 2022* and ready to jump right back on the Waverider with Legends of Tomorrow season 7 episode 8, “Paranoid Android.”

*ready to practice some extreme escapism

Previously on Legends of Tomorrow, Robo-Legends crashed the real Legends’ party, programmed to believe they were the real and righteous Legends and that the Legends WE know and love are time terrorists out to destroy everything in their path. This whole episode, including but not limited to this “previously on” section AND the opening credits, was from the perspective of these RoboLegends, which was absolutely brilliant. No notes! 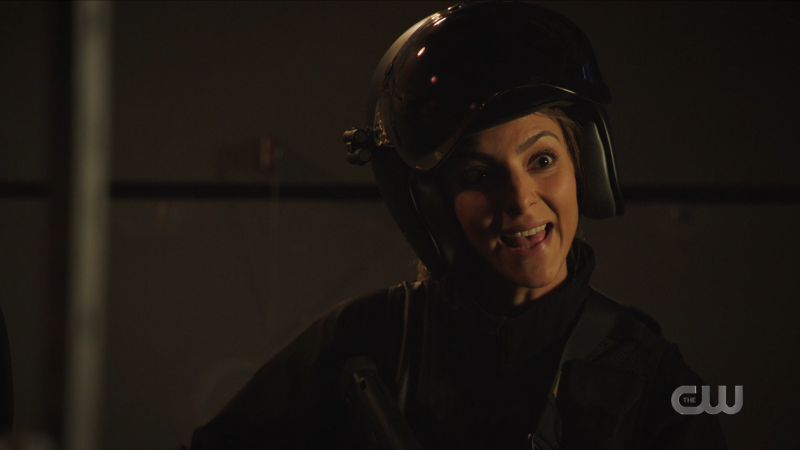 I lost track of which number version of Zari we’re up to but I love all iterations.

They attack and we see the fight from the mid-season finale, but this time from the other side. The RoboLegends take RoboZari and RoboAstra’s deaths fairly matter-of-factly, though they do swear to avenge their fallen friends. Specifically, Behrad wants to avenge Zari and Spooner wants to avenge Astra, because whoever programmed them knows exactly (okay, mostly) what they’re about.

Once the team is back on the RoboWaverider, the fake Sara and Ava growl at each other, like whoever created them knew that if these robots were in love, that would make them happy, and happy people just don’t kill their doppelgängers. They just don’t. 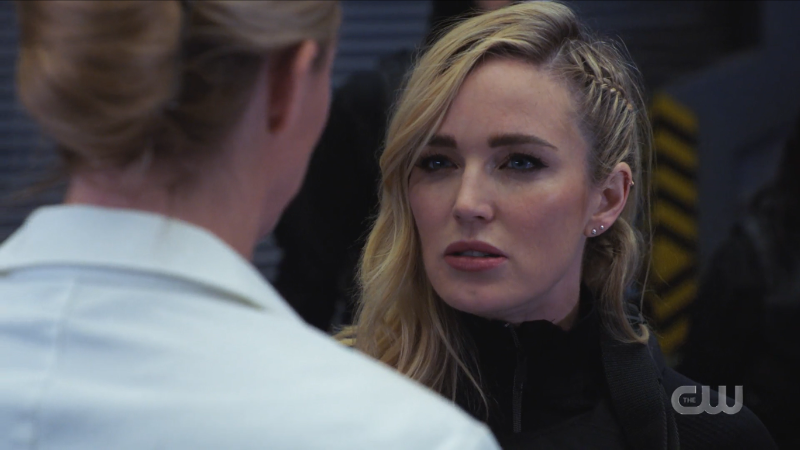 “If we had more time this could have made a great enemies-to-lovers AU.”

RoboSara reviews their last mission, trying to see where they went wrong, and she can’t help but notice a pattern. Giving factory workers job security, saving random 20s lounge singers from their boyfriends…these Fake Legends she’s been warned about don’t seem all that bad after all… 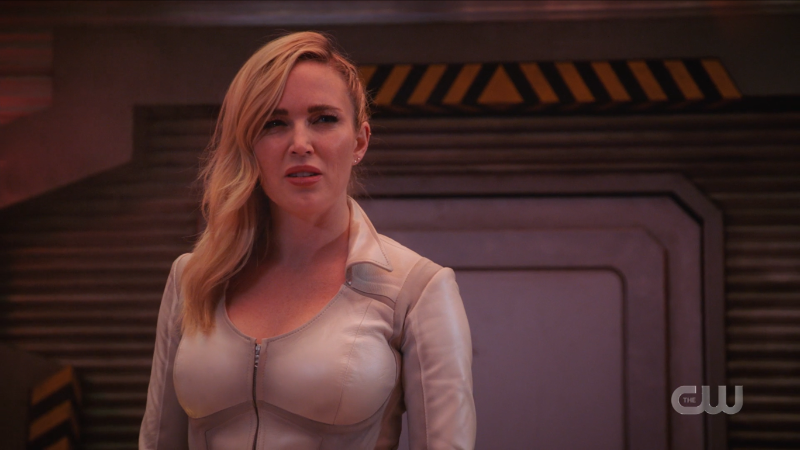 That feeling when you realize actually your parents can be and often are wrong about things.

Gideon tries to keep her on mission, which right now is to go to Ukraine 1986 to put Chernobyl back on the menu, but when Zari and Astra stroll in, she can’t help but be a little suspicious. She sends the team off with big weapons Ava calls Destiny Restorers but she hangs back to ask Dr. Sharpe about these miraculous recoveries. Gideon interrupts them, though, so Sara joins her team, and as soon as she’s gone, Dr. Sharpe incinerates RoboZari’s old body. Dun dun dun! 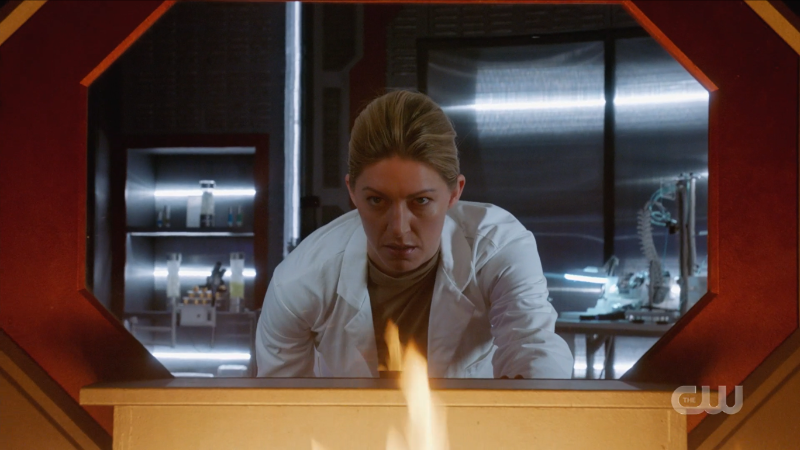 Zari and Astra run QB from the Waverider while the rest of the team heads down to “fix” history. Zari uses one hand to work a stress ball and the other to hack and finds the target of their anomaly lickity split; Astra compliments her on it and oops I ship them. 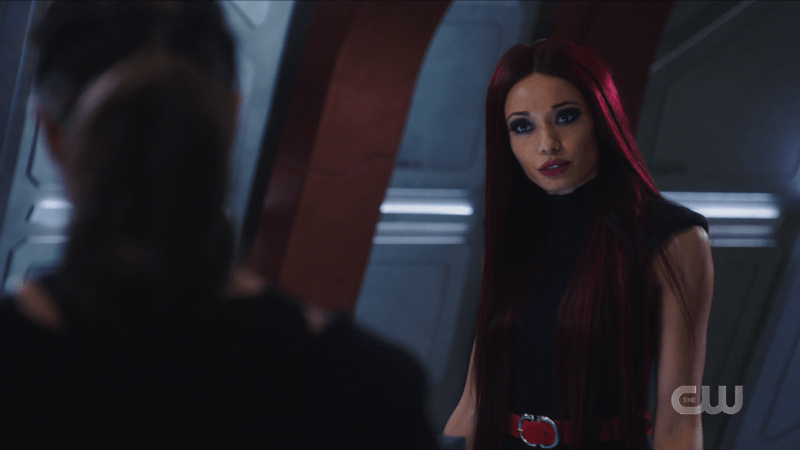 On Instagram Olivia Swann said she called this alter ego Micki Ninaj and I love that for her.

RoboZari says she’s feeling extra smart since she woke up from surgery, and her one-handed speed typing proves helpful…until Gideon tells her she hit a wall. Because time is like cement. She simply can’t know more information about the mission.

The RoboLegends fight some Soviets and capture their General and while Sara is interrogating him, She tries to explain to the General about how they’re the good guys. She also thinks the General is the only one they’re going to kill until Zari pops into her comm and says the “Destiny Restorer” weapons actually just blast the men with the amount of radiation they would have gotten in the blast, which seems a little aggressive to RoboSara.

As they realize more people are fleeing the city, Nate says, “If we don’t stop this, all these people are going to live,” and Sara looks like she’s starting to have her doubts.

But her team keeps pushing her forward, including RoboZari and RoboAstra setting up plans for a new broadcast that will get people to go back home so they can get radiation like they were supposed to. 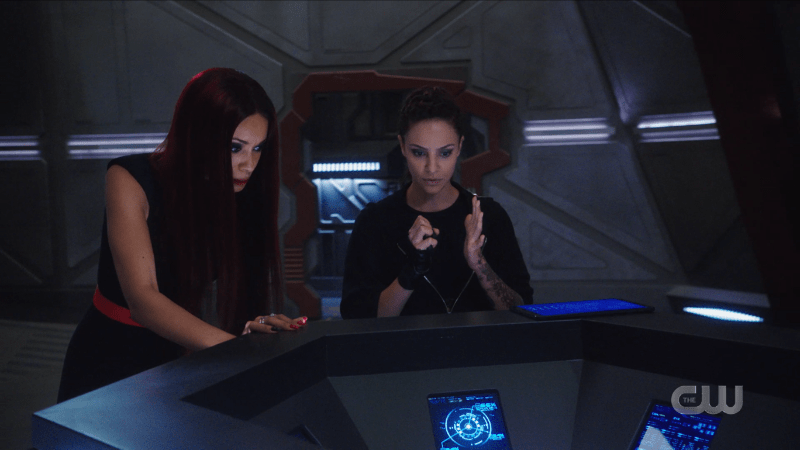 ALL I’M SAYING is that if Legends wants to hang out with Batwoman on Wednesdays it really has to up its gay game.

They use the General’s children to blackmail him into making the video, but before Spooner and Behrad run off to grab the kiddos, Sara pulls them aside and makes sure they’re all bluffing. When she realizes she’s the only one bluffing, she hesitates about this plan, but stupid Gary causes a it of a commotion and Sara ends up getting shot. She says she’s fine to go on and figure out a plan that does not involve killing children, but Dr. Sharpe pulls her back to the Waverider.

Since she got shot in the kerfuffle, Dr. Sharpe insists Sara get surgery for her injury, but before she puts her under, Dr. Sharpe interrogates Sara about why she hesitated in the field, but RoboSara lies her way into convincing her not to pull out the weird computer chip with her name on it that she promised were just medical records. RoboSara pulls her IV out and stays awake during her surgery, and is horrified to see that Dr. Sharpe pulls a metal part out of her shoulder and puts a new one back in. 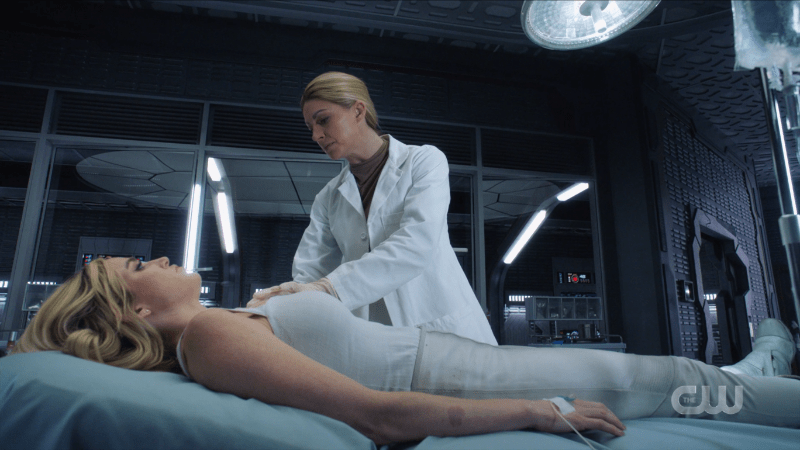 Dr. Sharpe also managed to magically clean the blood off Sara’s White Canary outfit so that was nice of her.

When Dr. Sharpe leaves, the White Canary rises and breaks into the cabinet to steal the weird chips, immediately bringing them to RoboZari. 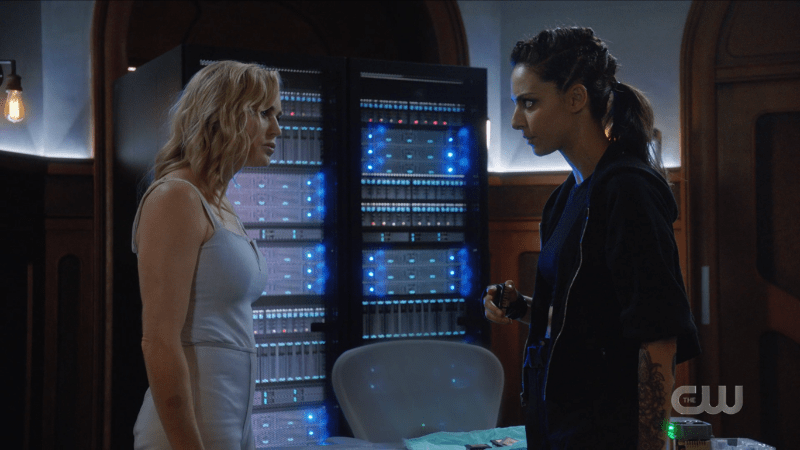 The braids alone in this episode made me gayer.

Luckily, after explaining, RoboZari not only believes RoboSara, but she takes it one step further; she thinks Dr. Sharpe is tinkering with their bodies AND their minds, based on how she feels post-surgery. She also is starting to be on Sara’s side re: doubting their mission; she did think Gideon’s mantra of “history is like cement” seemed a little illogical. Maybe Dr. Sharpe is controlling her, too…