It’s time to unmask the Legends of Tomorrow 603 recap, The Ex-Factor.

Last we left the Legends, Sara Lance found herself on a mystery planet with her alien abductor Gary and got bit and poisoned by Amelia Earhart, and Ava was leading the Legends, including newbie alien hunter Spooner, on a mission to save their captain.

We open with another of the alien escapees that has landed on Earth, but this one in the year 2045. He demands to know the world’s leader from some very scared regular humans, and sees a tabloid that calls Zari’s ex DJ S’more Money the king because he won a reality show last year.

It doesn’t really sound like a thing we need to care about, until Zari gets a message on her future-phone from her hilariously-named assistant Les-lay about DJ S’mores getting eviscerated by an alien. 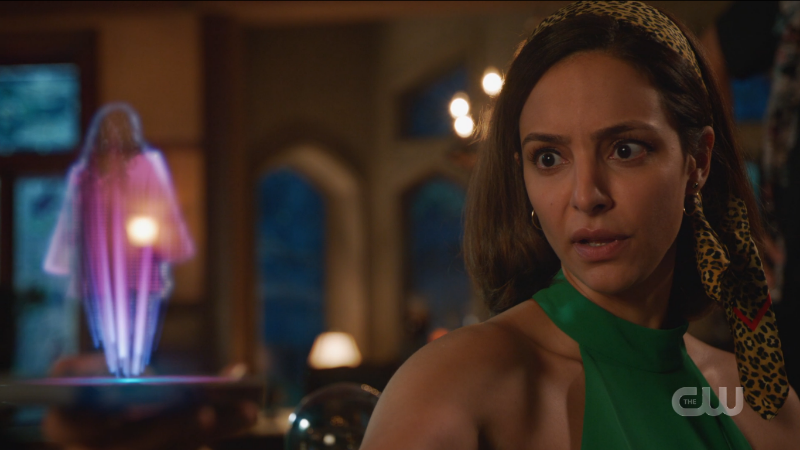 I hope this full body hologram technology is an Apple trademark and that me and my Android are safe from ever having to use it. Or that you can at least choose its outfit so no one knows how often I’m in PJ pants.

This call interrupts Zari’s makeout session with Constantine, as well as Constantine trying to get Zari to do relationshippy stuff with him and Zari changing the subject to the punk song singing about falling in love with someone you shouldn’t. I normally wouldn’t even mention such a thing here because I personally think Zari deserves better but it does become relevant later, so stick that macaroni in your hat for now.

The Legends get the information from Gideon (who once again is alarmingly delighted about evisceration… should we be worried about her?) and figure out from the interaction that probably the robot alien thought DJ S’mores was a leader of sorts.

Ava starts to hand out roles for the mission, and asks Mick to show Spooner the ropes, but Mick just stomps off as usual. Spooner is surprised because Ava seems to command more respect than that, and Nate tries to write it off as Mick being upset that Sara’s gone. But he’s barking up the wrong lesbian if he wants that to excuse his bad behavior. 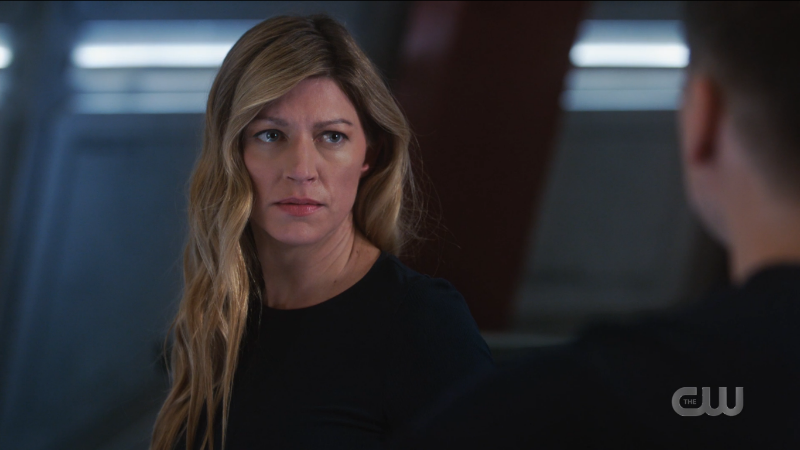 “Please tell me again about how other people feel about the LOVE OF MY LIFE being missing.”

Nate tries to make up for his insensitivity by reassuring Ava that Sara is probably fine, kicking butt and taking unpronounceable names on some other planet like her fellow bisexual badass, Valkyrie.

But the truth is, when we go back to see how Sara is doing, she’s not doing so hot. Gary tries to get her to rally, but she’s too weak from her gnarly alien bite so she tells Gary he’ll have to fight. Gary waggles his noodle arms at her and asks how exactly he’s supposed to do that but she reminds him that his true form is an alien body that has a gaping maw in its chest. Gary is hesitant to just gobble people up all willy nilly, but Sara is in full assassin mode now and says sometimes you have to do things you don’t want to do just to survive, just to get to the other side. And she says Ava is her other side now, and she’ll do anything to get back to her. So Gary has to alien up and do the same. 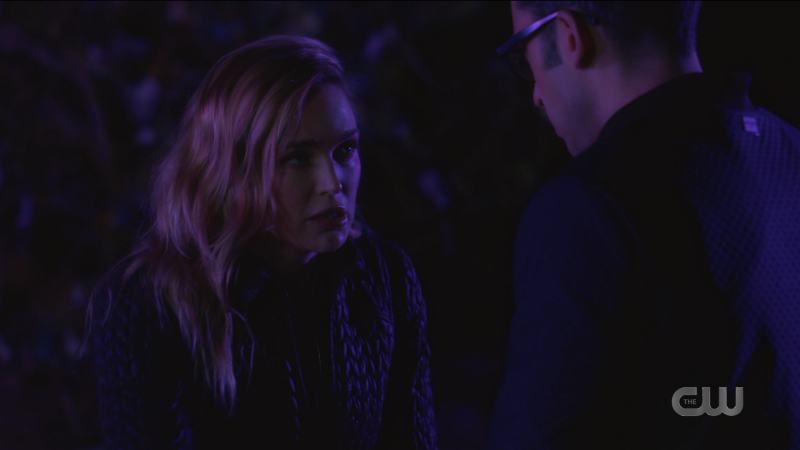 “There are bad people on both sides just eat them.”

The Legends go to Hollywood, 2045, where the Rock is president and reality competition shows are the only reason network TV still exists. The singing competition on question, Da Throne, is down to its final few contestants, but much like this season of The Masked Singer, there will be a wild card contestant thrown in. (Don’t ask me why I know that.)

Zari channels her inner socialite and the Dragon Girl makes an appearance on the red carpet, causing enough of a buzz to allow Ava, Behrad, and Nate to sneak inside. 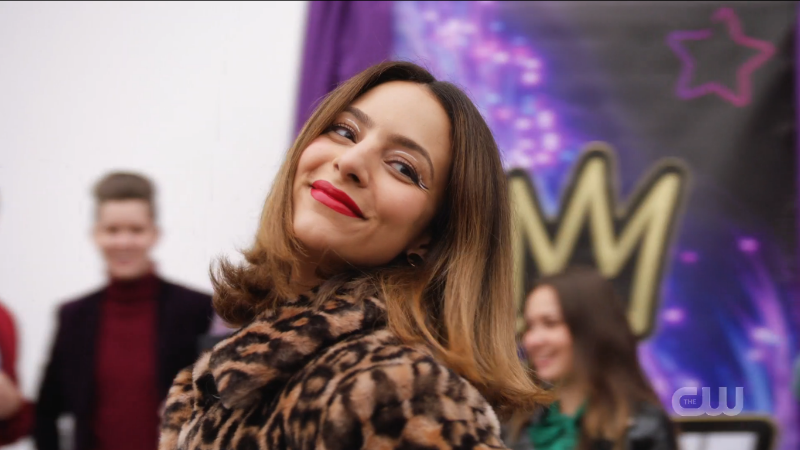 Tyra would be proud of this smizing.

After patiently waiting his turn, an alien we will call Lord Knox takes the stage to announce he’s here to slay the king. But before he can do that, the Legends jump in and fight him, which everyone thinks is just part of the show. And when he wins the round and DJ S’mores tells him that he’s one step closer to earning the crown, Lord Knox accepts these terms and goes peacefully backstage.

Back on the Waverider, Spooner holds Mick’s beer hostage while she asks him what his entire deal is. He tells her she shouldn’t bother unpacking, and she realizes he might be bitter that he’s the last of the Old Guard left now that Sara is missing. He grumps off but one thing is becoming pointedly clear: Spooner isn’t going to sit back and take his shit like everyone else on this team. 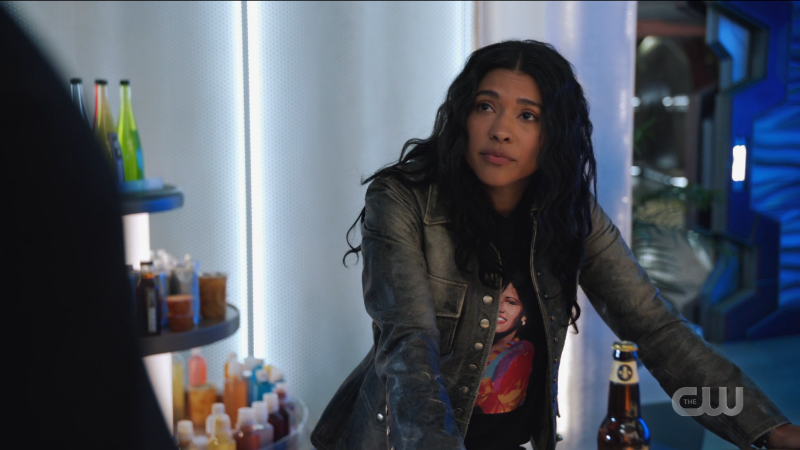 “Being an asshole can’t be your whole personality, bruh.”

In Hollywood, Ava once again gets to put her acting chops to the test as she pretends to be a handler for the show and manages to escort Lord Knox right into the Waverider’s holding cell. Once he’s safe inside the barrier, Ava asks him about Sara Lance, but all he knows about her is that Ava’s heart rate increased slightly when she mentioned her. 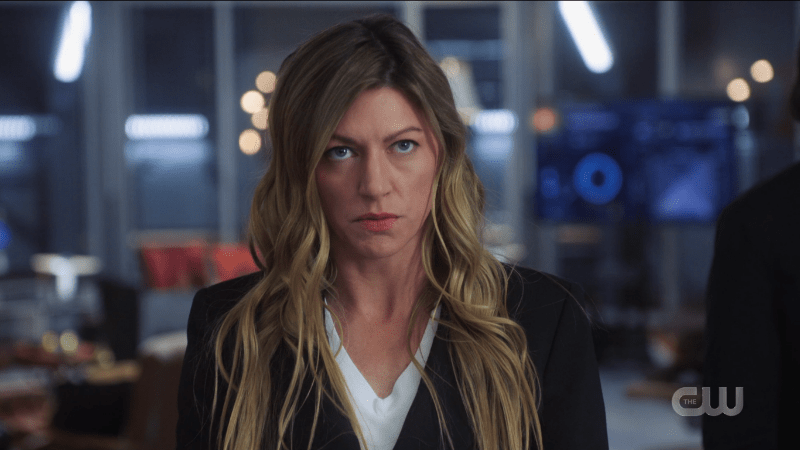 Lord Knox explains that he was abducted and when he crashed here he decided to just carry on his primal objective of world domination. He has technology that even Gideon can’t compete with, and accuses them of not fighting with honor. But they realize he’s a baddie they can actually rationalize with so they convince him that the only way to be king is the compete in the singing contest, and after spending only a brief time with humans, he understands that this is exactly the kind of idiocy humans would use to determine their leaders so he buys it.

After making her grand re-entrance into society, Zari sits down with Les-lay and learns that her business has been tanking in her absence. It turns out it’s hard to be the face of a company when your face isn’t plastered all over every screen. But it’s telling that, as upset as Zari is about this news, her mind is still on the mission first and foremost. She asks Ava for the go-ahead to try something and Ava gives it without question; a formidable little duo, those two are becoming.

So while Constantine distracts DJ S’mores, Zari finds a camera to talk into and declares herself the wild card for the competition. 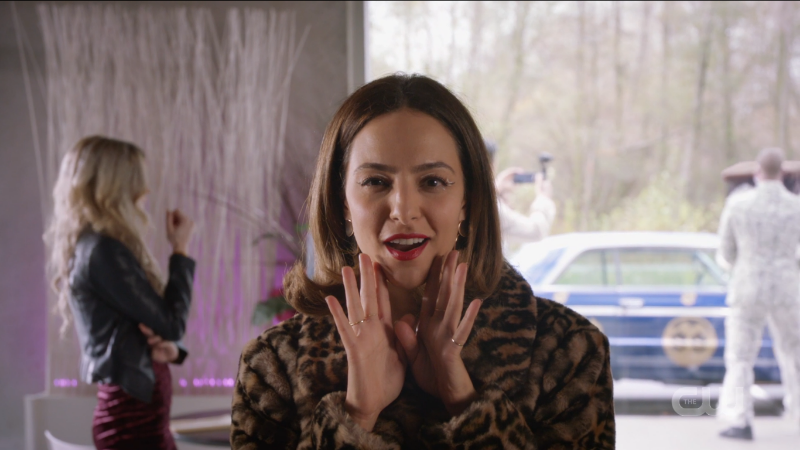 I knew they couldn’t have an episode with a singing contest and not let TALA ASHE sing, but I was still delighted by this announcement.

Spooner, used to being a team of one, watches Ava gracefully maneuver her team into place and using all her players to their strengths and she’s impressed. She settles in next to Ava and they watch as Zari sing. 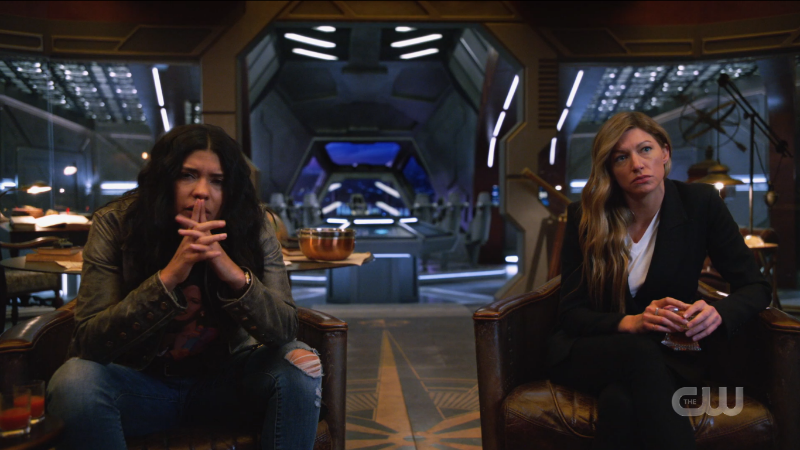 This is also what it would look like if I made anyone else watch an episode of this bonkers show with me.

Zari’s song is about being an international nasty girl and would make Girls5Eva proud, winning the hearts of America and earning her a spot in the final round. 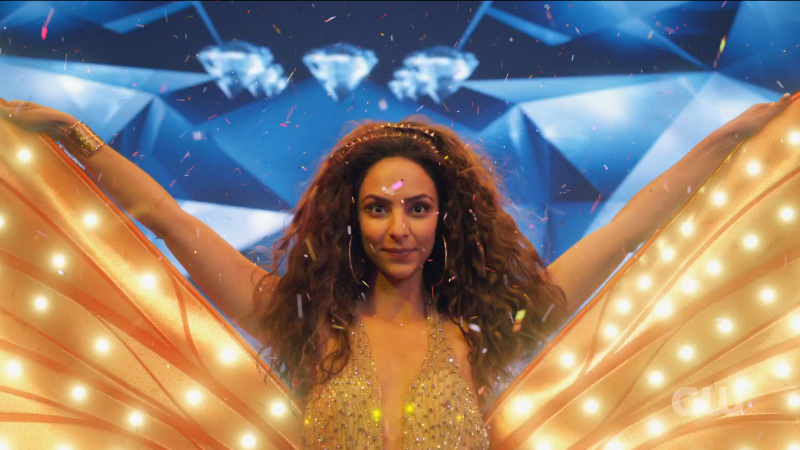 This performance was a little bit Alexis.

On their mysterious planet, Gary takes Sara’s advice and starts tentacle-whipping a little horde of uniformed guards that come marching toward them. He starts gobbling them up while Sara wanders off after what seems like a hallucination of Ava. 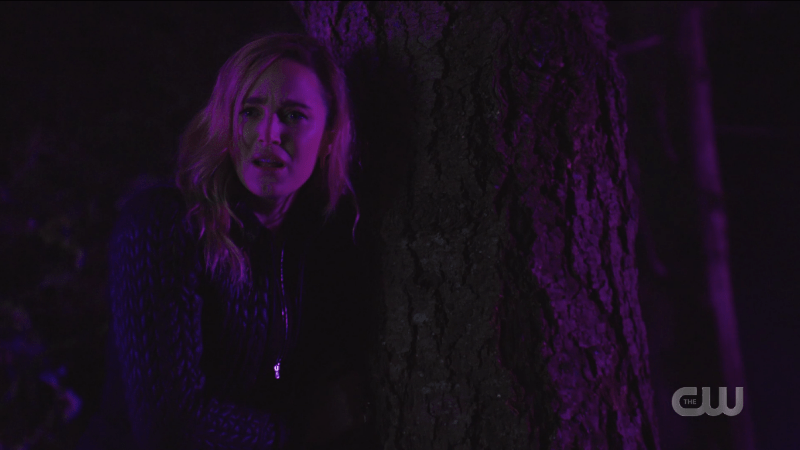 But when Gary goes to peek under the helmet of the last guard he didn’t feast upon, he realizes it’s an Ava clone. In fact, it’s beginning to seem likely the whole planet is full of Ava clones. And that means Sara is meandering right into danger.

Backstage at Da Throne, Les-lay and the boys decide to give Constantine a makeover so he can make an appearance in Zari’s behind-the-scenes interview to up her chances of winning with a dash of romance. As he gets shuffled off to hair and makeup, Zari’s mom comes wooshing in, demanding to know why Zari is on her favorite show and no one told her. They have a conversation about her mom’s expectations and if I’m being honest it felt like a vessel for getting Constantine to overhear Zari calling him just a fling when really I wish this emotional moment was just about their mother/daughter relationship, and not about him, but I’ll admit my bias on this one. 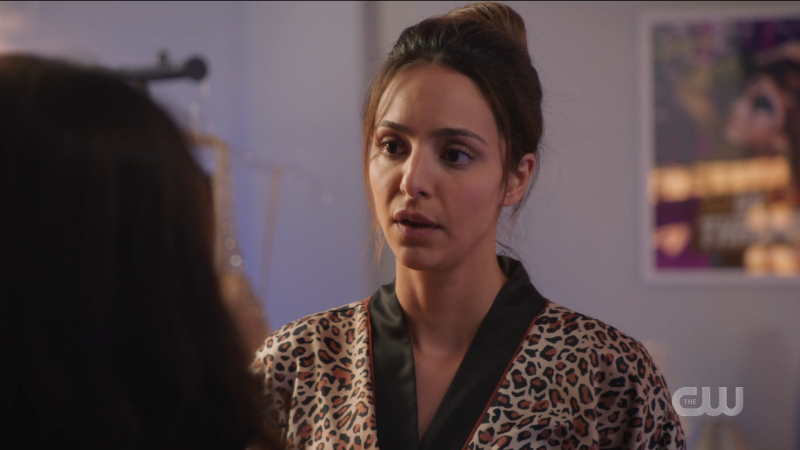 Either way, Tala Ashe acted the hell out of the scene and even though hearing a mom say “you look tired” made my eye twitch in a very familiar way, it was a nice addition to this episode-long reminder about what the life Zari left behind was like.