The on-air interview goes about as well as you would expect with Constantine involved; he can’t spend five minutes doing something for someone else, and immediately is overwhelmed by his own feelings, and of course decides they’re more important than Zari’s feelings, or the mission, and he storms off.

When Zari catches up with him, he accuses her of being fake, and she’s confused why he’s making this sound like news. He knew about her Dragon Girl persona, why is this a surprise to him? He also knew where she stood re: their relationship. In fact, she was under the impression it was where they both stood. Constantine clearly disagrees but instead of using his words, he storms off again. 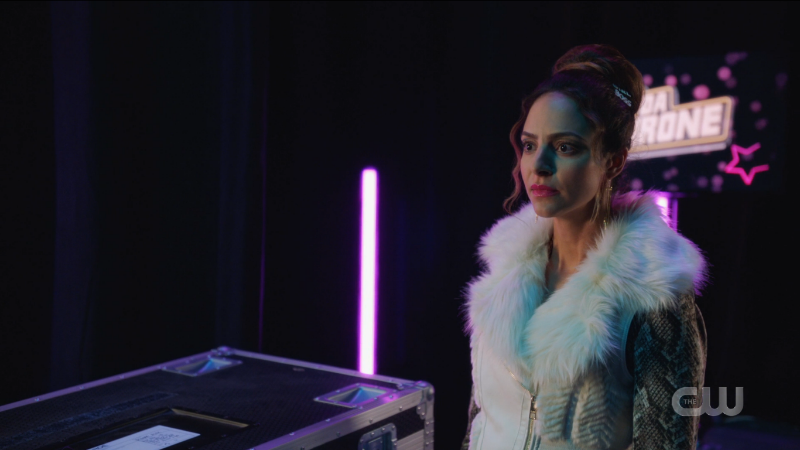 DJ S’mores waits til Zari is alone and offers her power ballad for her final performance, to prove she doesn’t need a man to win, and since I imagine she didn’t have very solid plans anyway, she accepts.

On the mysterious planet of mysteries, Sara is still trying to follow Ava but the poison in her system is spreading. When the Ava she’s following turns around and looks at her and doesn’t answer Sara’s question about where they’re going, Sara knows something is wrong. 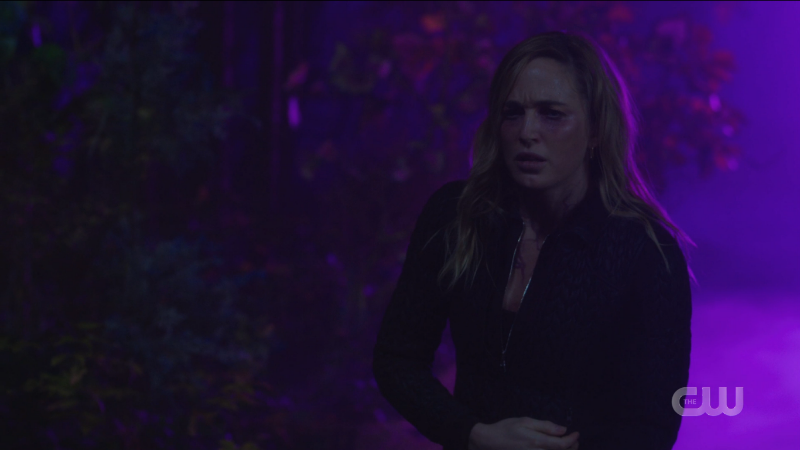 I wonder if all the other Ava clones are lesbians, too.

As soon as Ava turns her back, Sara clocks her, saying, and I quote, “You think I don’t know my own Ava?” And it’s very sweet.

During Lord Knox’s backstage interview, he describes an alien that kidnapped him called Kayla, describing her in detail while Ava and Spooner (and presumably most of America) watch intently. 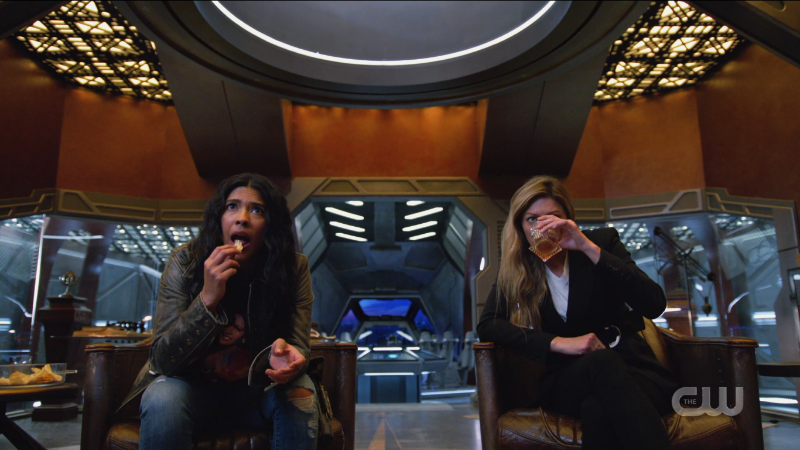 Every single time they cut back to Spooner and Ava being glued to the TV was GOLD.

Mick stumbles out of his room and decides to go rogue, pointing Gideon’s lasers at the Hollywood studio, despite Ava’s protests. I’m not sure why Gideon isn’t programmed to have Ava’s commands override anyone else’s, but before Mick can shoot said laser, Lord Knox calls for backup and dozens of alien spaceships appear in Earth’s atmosphere. Ava gives Mick her sternest “you fucked up” voice and Mick realizes that maybe this time he took things too far.

But like a lot of people do when they realize they messed up but are too proud to admit it, before he backs off, he doubles down. When Ava confronts him about his bad attitude, first he points his fire blaster right at her. He tells Ava that if she were the one kidnapped, Sara would have found her by now. And Ava doesn’t disagree.

But of course, Sara being missing isn’t all on Mick’s mind. Lita is in college now and isn’t answering his calls as much as she used to. She’s growing up and doesn’t need her dad like she used to, but you know who does still need him? No really, do you? Because Ava says the Legends do, but I personally am not so sure.

Ava tells Mick to shape up or ship out because if they’re going to save Sara, they have to at the very least stop getting in each other’s way. 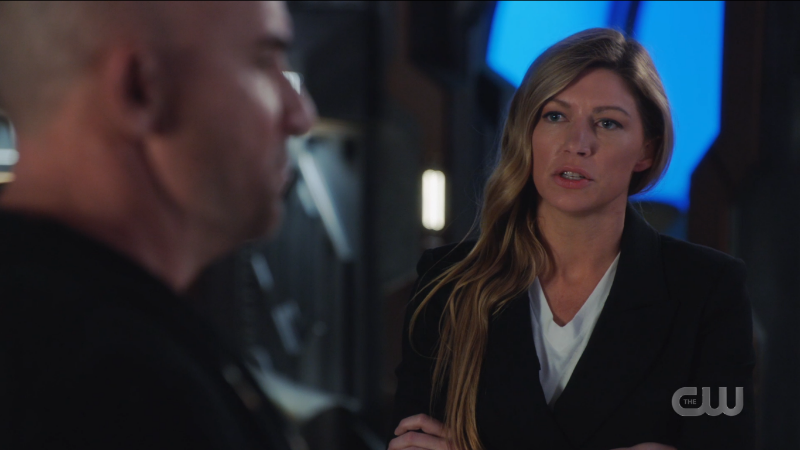 I’d be okay if Mick and Nate went on an off-screen side quest for a few episodes.

Les-lay slinks around backstage looking like nun-murderer Katy Perry and up to about as much good, cornering Constantine and trying to get him to pose with here for scandalous posed photos of him cheating on Zari. Turns out, Les-lay is a fake friend and only cares about Zari as far as her money and fame are concerned, and she thinks Zari’s unhappiness sells better than her contentment.

Constantine starts to realize what Zari has been up against in this world she was thrust into at a young age and quits his job as Les-lay’s puppet.

In a nearby dressing room, DJ S’mores offers Lord Knox the same girl power ballad he offered Zari, which Lord Knox doesn’t mind because his alien race doesn’t adhere to binary gender roles. So while he cannot relate to the song in question, he certainly isn’t offended by the thought of singing it. So he synthesizes the most popular vocalists in history and prepares to sing like something churned out of the Disney boy band factory.

The boys of the Legends realize that DJ S’mores gave them both the same song too late to stop Lord Knox from singing it, and Ava and Spooner are enthralled by watching this seemingly stiff metallic man groove to the pop power ballad. 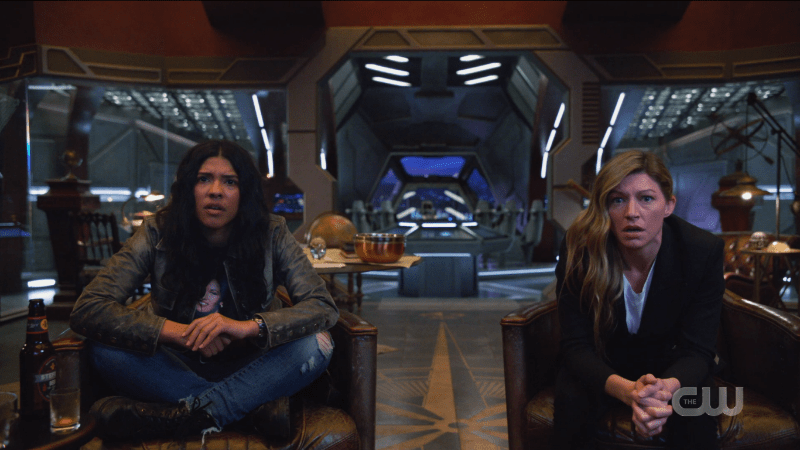 I binged Masked Singer aka Where Problematic People Are Sent to Attempt a Social Comeback, apparently, and this was me the entire time.

The song even mentions being a Dragon Girl but Lord Knox isn’t here to be moving and emotional, he’s here to be technically good so he can win. Zari is upset and she thinks her plan backfired; she assumes this means she’s lost the competition. No matter how well she sang the same song, it would look like she’s just copying the crowd favorite. 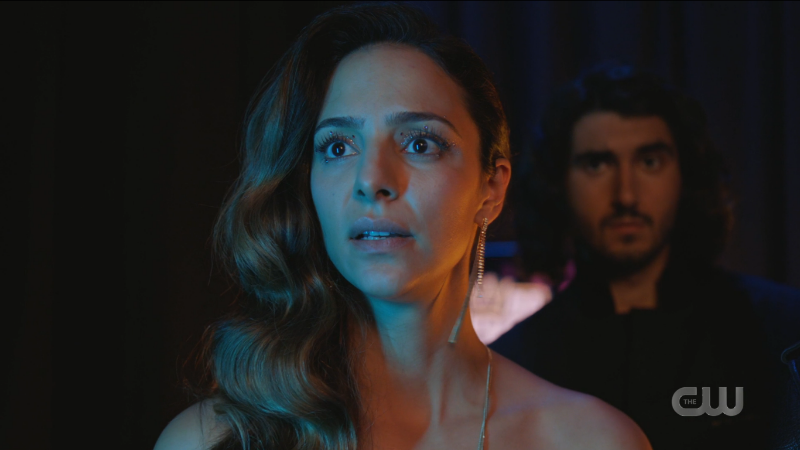 “This is the worst thing to happen in a reality competition show since Sabrina Bryan was voted off Dancing with the Stars.”

Constantine decides that right now is the best time to air out his issues with Zari calling them a fling, and he says he wants more with her, even if they both have a history of relationships blowing up in their faces. Constantine asks if they can be something real, and in response Zari goes out on stage and sings a soft, slow version of the punk song they were listening to earlier in the episode. Constantine grabs his guitar and joins her so they can punk it up, and even though I still think Constantine is a selfish git and that Zari deserves better, this moment was admittedly very cute. 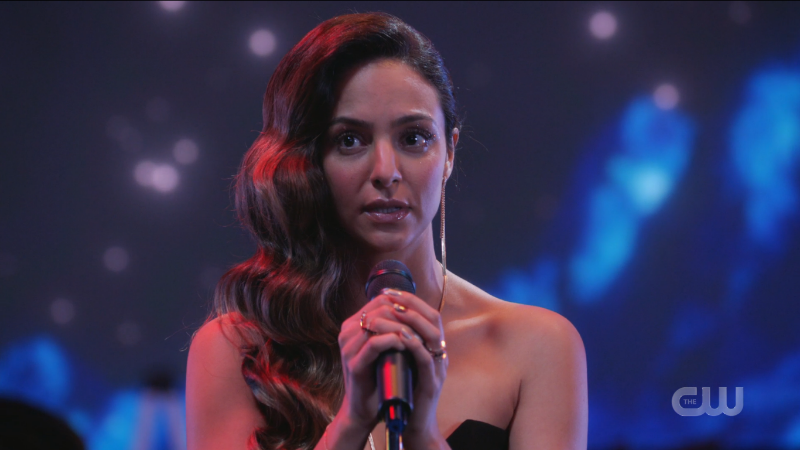 “Livin’ in my own world, didn’t understand that anything can happen when you take a chance.”

Zari wins and Lord Knox bows to the true and rightful queen. Once they get back on the ship, Ava smiles proudly at Zari; she never doubted her for a second. 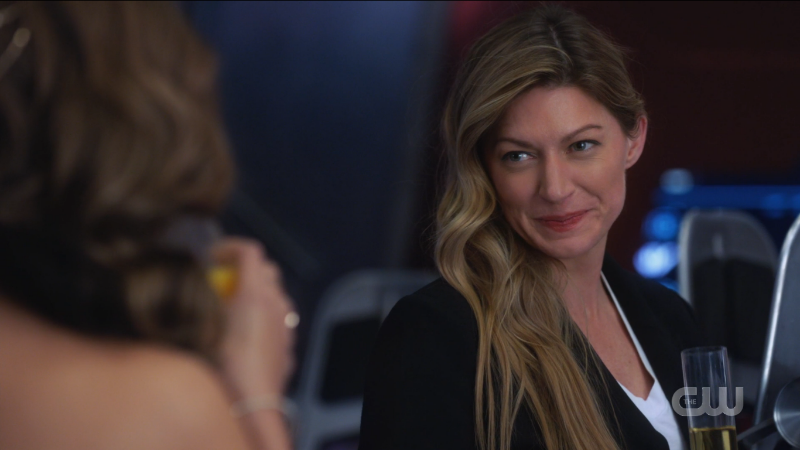 Zari and Ava (sorry, Z and Aves) becoming best friends is one of my favorite relationship developments ever.

Zari thanks the whole team and, now that the battle is done, Lord Knox exits his metal exoskeleton to reveal he’s actually quite itty bitty. He’s about to tell them more about their highly advanced race of aliens that honestly probably has really efficient ways of tracking missing ship captains but before anyone can ask, Rory smooshes him beneath his big stupid foot.

Mick is sure that they already have all the information they need from the artist formerly known as Lord Knox because he has a police sketch of the alien named Kayla he described in his backstage interview. He thinks that Kayla is the key to finding Sara. 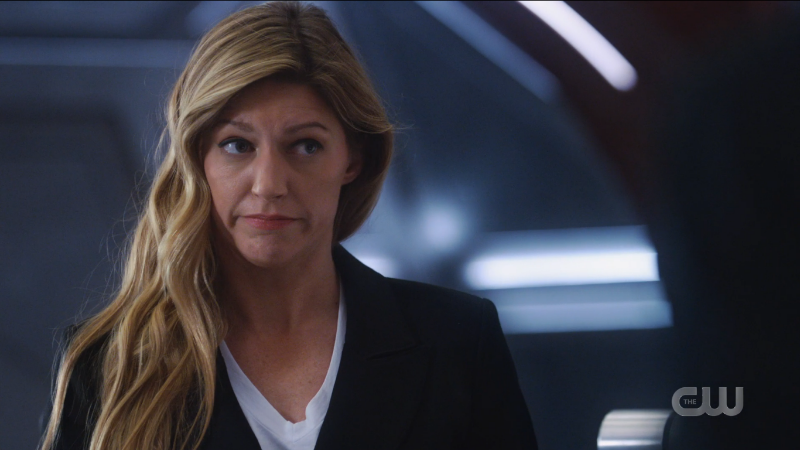 “Hopefully her human form is less Gary-shaped and more shaped like, say, someone who has played queer on TV before.” (Warning: Don’t click that link if you don’t want casting spoilers.)

Though they better hurry because as Sara stumbles into a room on this mystery planet, where the song Space Girl is playing, she finds a man that seems to know exactly who she is…even though her face is turning a sickly purple. 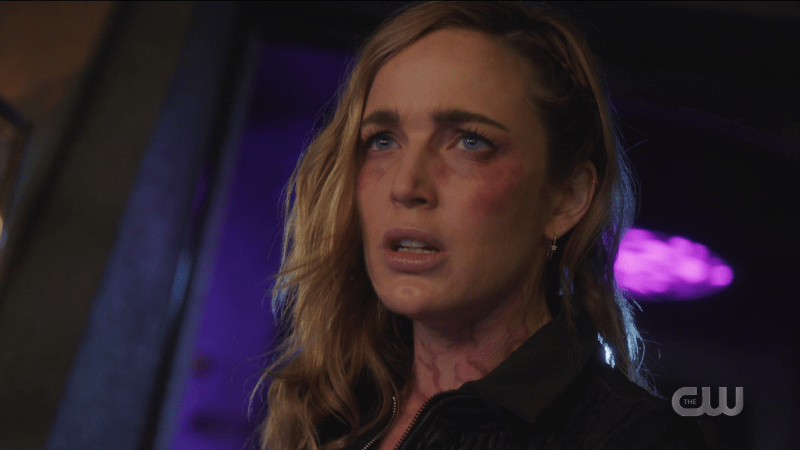 “Why is this happening to me? Is it because I spent most of quarantine galivanting around the world with Ruby Rose?”

This show continues to be a truly wild ride and even though it is keeping us from some sweet lady kisses I love that the whole driving force between this whole season is two queer ladies just trying to find their way back to one another.

Next week it looks like the Legends are off to almost cause and then prevent World War 3! See ya then.