Hell-O and welcome to this recap of Legends of Tomorrow Season 7, Episode 13, “Knocked Down, Knocked Up,” aka the season finale!!

Last week when they were saying their goodbyes, the Legends decided to meet up on Wednesdays. And it’s been one week for them, same as us, same as Alex Danvers’ favorite song, and Ava and Sara return to the manor for family dinner. 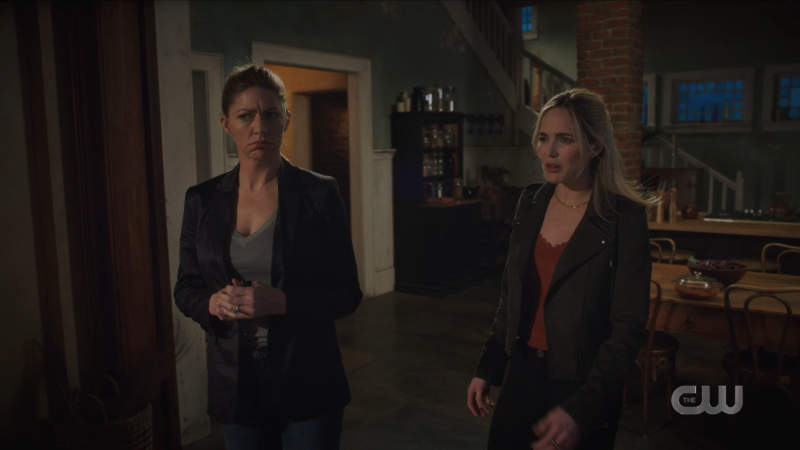 I know Ava loves to be early but that means Sara makes sure she’s ready early too.

They make a little joke about the Sunday to Wednesday time switch the show made, and then the Legends start showing up one by one. They realize the time machine is missing, and in its place they find a note from Gwyn saying his goodbyes.

But Gwyn isn’t tucked inside his quiet homestead; no, he’s swapping out the real Alun for RoboAlun in hopes to not break history whilst also saving the love of his life.

Up on the Waverider, Human Gideon is alone with Evil Gideon. The AI spots an anomaly, and for her first go, Human Gideon decides to go full Legends, dressing up and having a conversation with the rogue time traveler to teach her the error of her ways. And she succeeded but it wasn’t quite the romp it was with her friends. 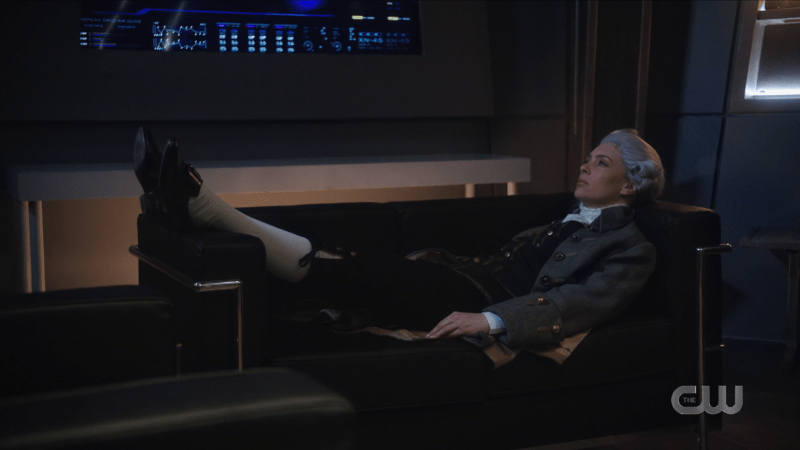 This is giving me high school drama club flashbacks.

For the Legends, a month goes by. Not much has changed, but Ava and Sara are enjoying the settled down life so much that they’re talking about maybe having a baby. Sara is so excited about it, in fact, that she gave Ava apple juice even though they’ve only just started talking about talking about it…just in case. 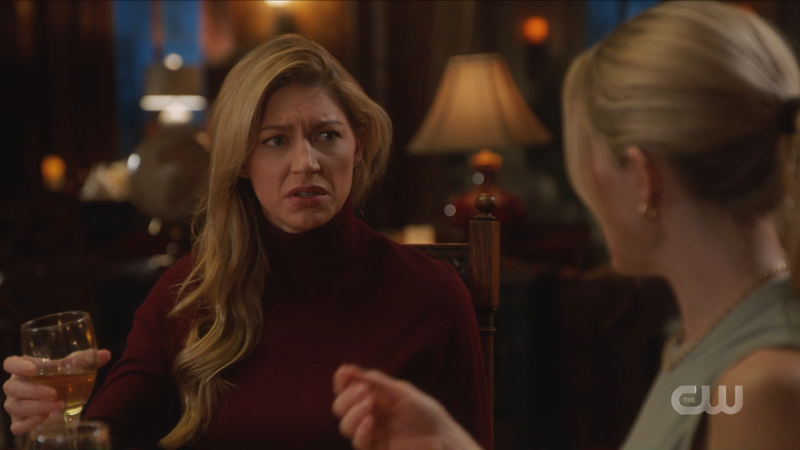 Baaaaaby Sharpe do do dodo dodo

Zari is very excited and it’s not really relevant to anything but I loved this screenshot of here so here’s a fancy Zari for you. 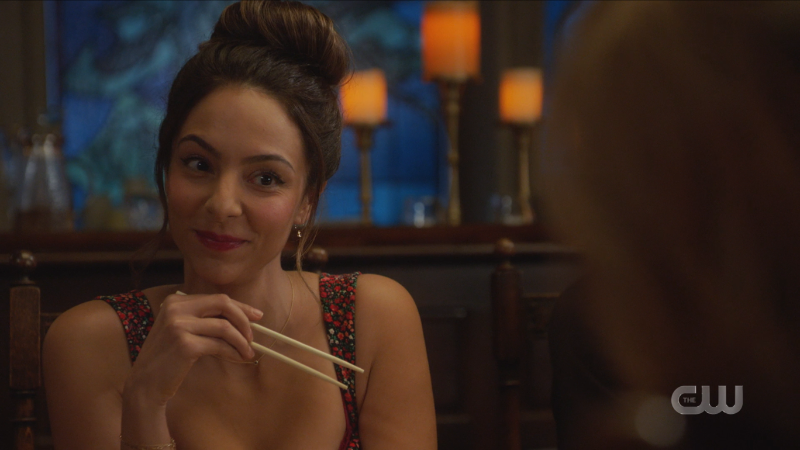 She’s going to be the best auntie ever.

They go around the table to give updates but they all dance on their own lives briefly before trying to pass the talking stick to someone else; Nate is having a hard time writing his book because he doesn’t feel past it yet, Astra thinks Capitol Hill is like hell, deflection after deflection as the conversation goes around the table. Trying to get the topic out of the room entirely, they Astra if she’s talked to Gideon. She nervously says no, saying it’s only been a month in a way to reassure herself as much as anyone; but the truth is, in the time stream, it could have been much longer than that for Gideon’s human body.

And it’s true, time is passing differently for Gideon. She’s no longer treating each mission like an adventure, she’s getting harder and colder, wiping memories and dumping people back in their original timeline. No apologizing, no explaining. 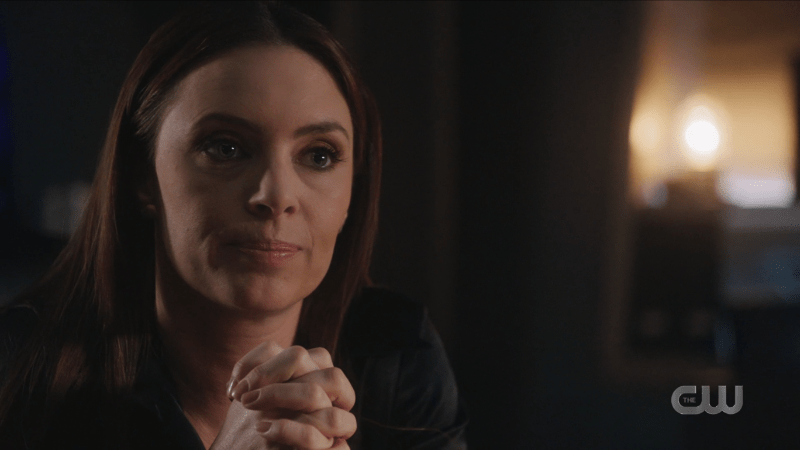 I feel like these two photos of Gideon so far are me early pandemic vs me late pandemic.

Two weeks later, Ava and Sara are first to arrive for family dinner again, and this time it’s Ava who has switched the booze out for something a little fruitier. She’s ready to start getting serious about having a baby, and she’s even narrowed down a list of donors to 50. Sara is THRILLED. She’s so happy her babe is going to have a baby, and she knows it’ll all be perfect because Ava is perfect. 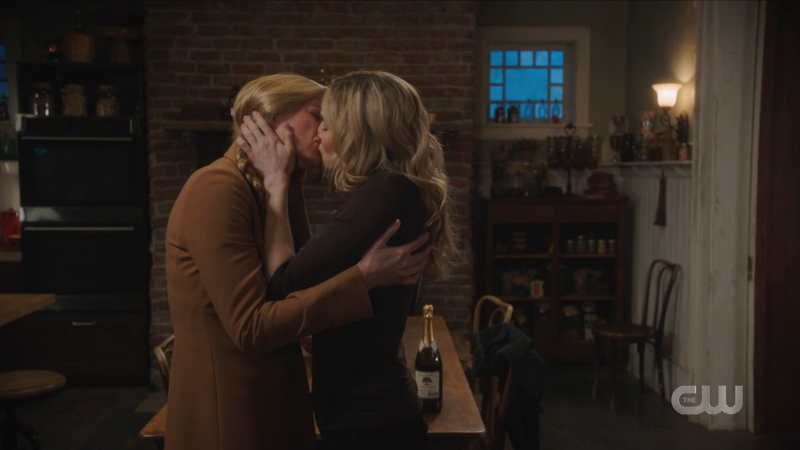 I hope other TV writers will see our reaction to this and realize that we’re not against queer women having babies as a concept, as long as it makes SENSE.

Ava asks how Sara wants to tell the rest of the team but Sara says she’ll let Ava decide; after all, they’re co-captains for life. And this moment seems small but it’s actually quite big. Sara is the one who offered to let this be Ava’s decision, she didn’t try to take control of the situation because she didn’t trust it to go well if she didn’t do it herself. She didn’t think of herself first. There’s no ounce of fear or worry in her, no self-doubt. Loving Ava has made her a better person; and not because Ava changed her or needed her to change. They just grew together and are better individuals and a better couple for it. And it didn’t happen quickly, none of this happened overnight. Ava showed up in Season 3; five Earth years for us, I think approximately that much relative time for them, too. We saw them meet, date, co-captain, get married. And hopefully, TV gods willing, we’ll get to see them become moms. It’s an arc unlike most we get to see. 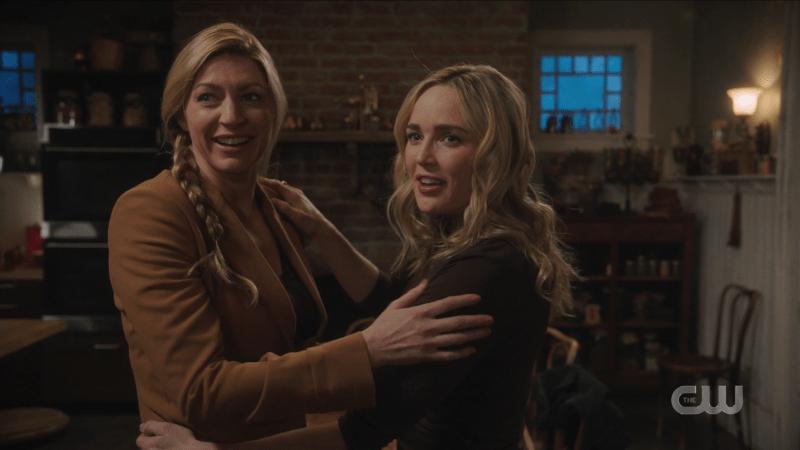 But I’m getting ahead of myself. Back to the show. After Ava heads into the dining room, Sara goes to open the bottle of cider and cuts her hand, and is surprised she doesn’t immediately heal. But decides that’s a problem for future Sara to worry about.

When Evil Gideon tossed Gary out into the timestream, he ended up landing amongst cave people, in prehistoric times, which is unfortunate because all he needs to get home is a door. He gets to work and builds one, and finally ends up in the manor to tell the Legends what happened to him, and Sara and Ava realize that their news can wait. 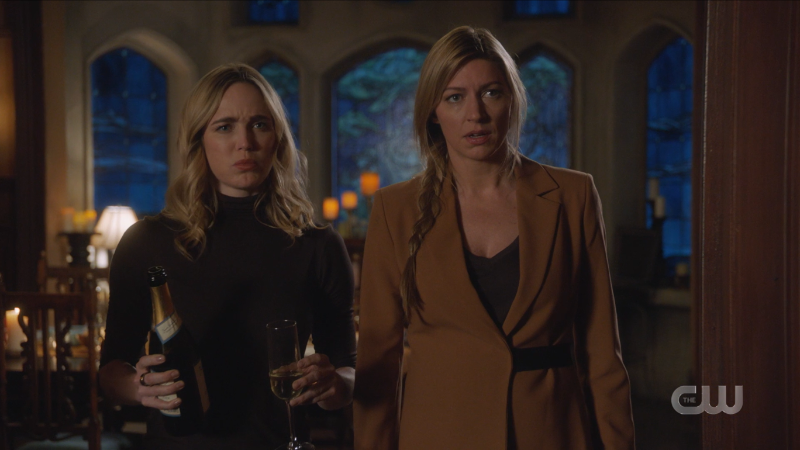 When you thought you had a bad day and then you open twitter and realize actually your day was fine.

When Gary tells them that Alun’s death is a fixed point, and that Gwyn wouldn’t know that and thus is about to get himself killed by the Fixer, the Legends immediately come out of their short-lived retirement to save their buddy’s life.

And luckily, Fancy Zari had pocketed a time courier in case of emergencies; she’d feel worse about it but it’s about to save Gwyn’s life so she’s sorry not sorry.

Before they go, Gary pulls Sara aside and asks if she’s going to sit this mission out because she’s pregnant, and she laughs in his face. She knows how babies are made, and she hasn’t done that lately. But Gary points out that she’s part alien now, and actually she doesn’t know how babies are made… 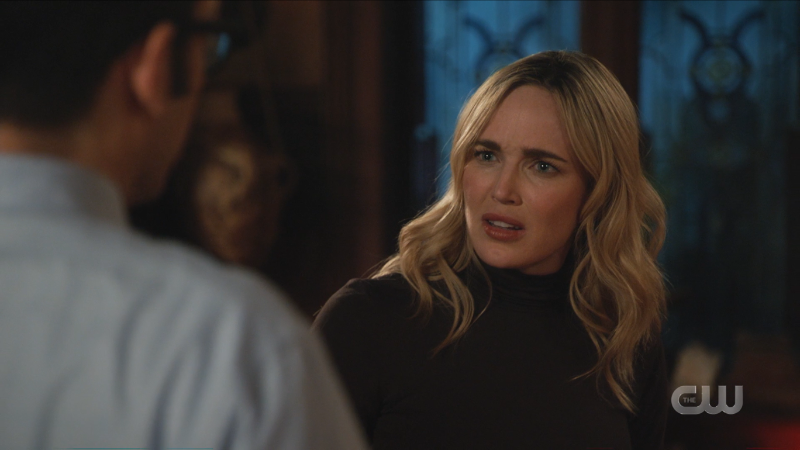 Growing up Catholic I lived in fear of getting immaculate conceptioned.

Sara is horrified at this news; this was not the plan! They had a plan! Ava was going to be the one who got pregnant! Ava loves plans!! Gary tries to explain to her exactly how the alien mating process works and how nesting together and deciding to have a baby, plus some sweet lady kisses, is all it takes for her alien side to spawn. Sara isn’t ready to process this information so she decides to dissociate from it entirely. Pretend she never heard it, tuck it away on a shelf. She will not speak of this right now, and if Gary values his life, neither will he. He leaves and Sara gives herself one more minute to be shocked by this news. 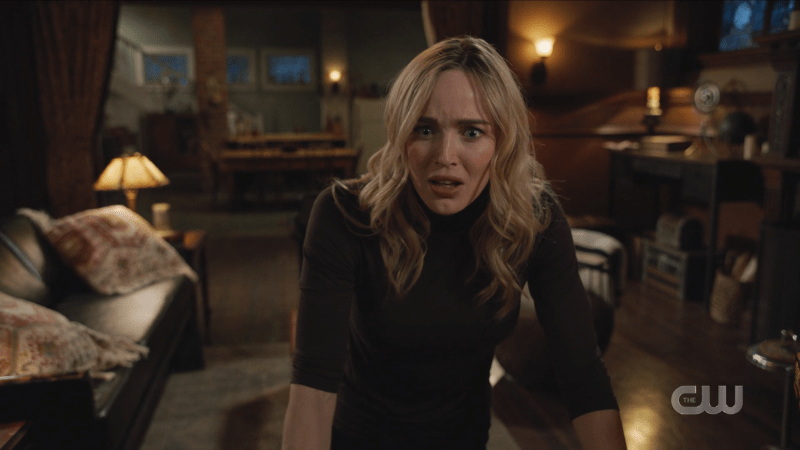 Now I have that “I am overwhelmed” song from tiktok stuck in my head.

The Legends go to the fixed point and start to make a base camp but the words “keep an eye out for the Waverider” are barely out of their mouths before Human Gideon strolls in, looking sterner than they’ve ever seen her. Astra is stressed about this change in her girl, but Gideon regards her coldly. 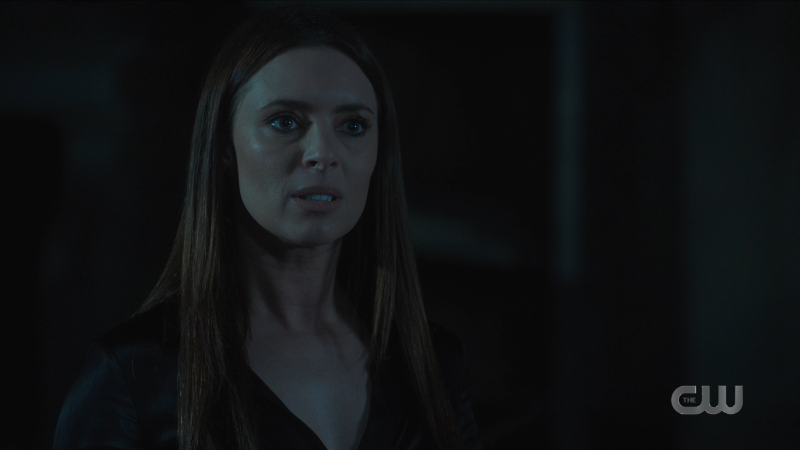 But when Human Gideon realizes that Gary didn’t leave the Waverider of his own volition, and in fact Evil Gideon kicked him off, Human Gideon even rationalizes it to herself, sure her AI counterpart had a good reason for doing it. Astra is agog; she says she sounds like a computer and storms off, Spooner hot on her heels.