Ladies, gentlenerds, and AVAs, welcome to this recap of Legends of Tomorrow Episode 605, The Satanist’s Apprentice, aka the partially animated one one Caity Lotz directed.

Once upon a time there was a beautiful woman who stepped off her throne in hell to join some time-traveling idiots and then decided to take a stab at living a normal human life. However, she’s in England in the 80s (I still don’t understand why she couldn’t be in 2021 but timey is wimey, yaknow?) and she has no money, no topside skills, and seemingly no luck. She gets stranded with a baguette at the farmer’s market, splashed by a car in a puddle, and insulted by a racist neighbor.

Astra snarls at him and scares him off before storming back to the manor in a huff. When she sees Constantine inside, she asks him for help getting money or food but he rushes off on a Legends mission. Astra is big mad. 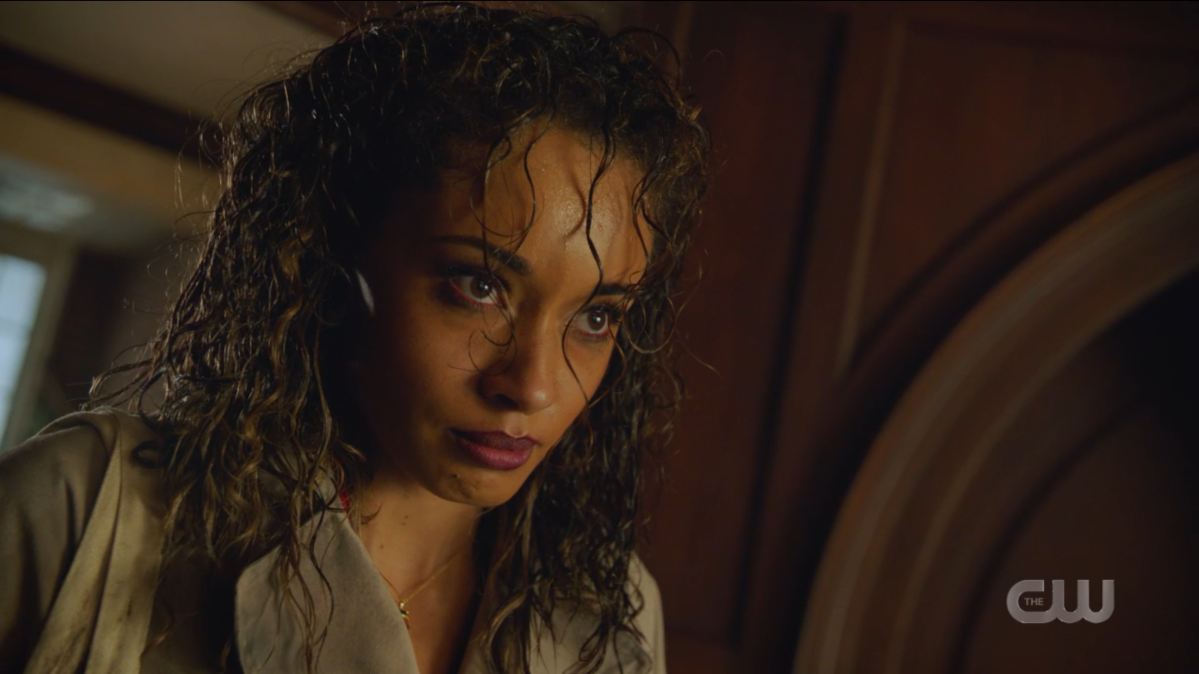 The next time Constantine comes sweeping through, Astra asks for some basic commodities like a washing machine or the internet, but Constantine is just BACK from a Legends mission this time and is a bit…distracted by Zari.

Astra tries to take things into her own hands by finding a job, but she is legally 15 in this time period, has no on-paper experience, and frankly doesn’t have the temperament for a job hunt as proven by her threatening a potential employer with a blood pool.

While trying to take charge of her own destiny, Astra finds her way to the attic and finds her mom’s journal that has a song labeled ‘for John’ written in it that Astra can’t read. Suddenly, she hears a voice, and she follows it to the back of the attic where there is a creepy-ass painting taunting her about being a fallen great. 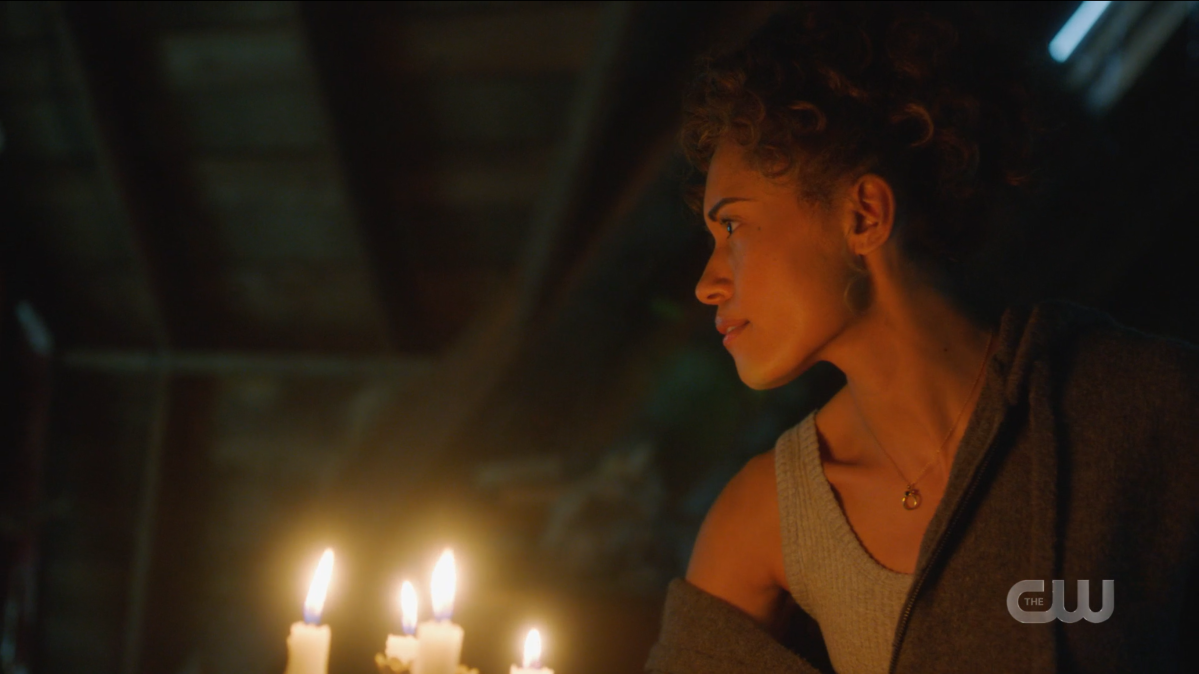 I love a lady with a candelabra. See also: Cheryl Blossom.

It’s the painting of Aleister Crowley, where he has been trapped since the Legends dispatched him. He says that even though once she ruled in hell, now she’s no better than a helpless princess. He offers to teach her some magic to help her out and she’s at the end of her rope so she listens. 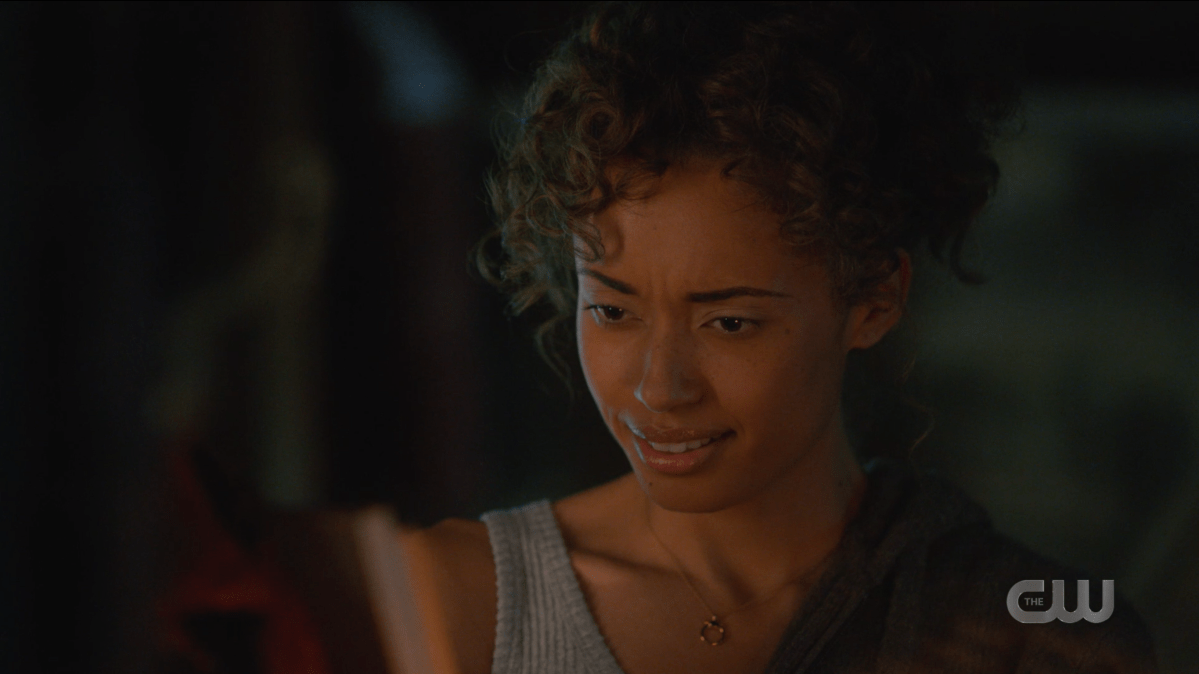 Astra this is why you should just rejoin the Legends. The Waverider always has wifi.

Meanwhile on the mystery planet, Sara is face to face with her captor, who calls himself Bishop. She presumes he’s the Space Lord but he’s more like a Disco Dude. And he’s excited to meet THE Sara Lance. He offers her an antidote to the Amelia Earhart alien that attacked her, and she hesitates from taking a neon green elixir from a stranger on a strange planet, but he’s claiming to want to save all of humanity and is counting down to her inevitable death so she takes a calculated risk and downs the offered drink.

Sara goes down and when she comes to, she is tied to a bed and being tended to by an Ava-shaped nurse which isn’t nearly as sexy as it sounds. 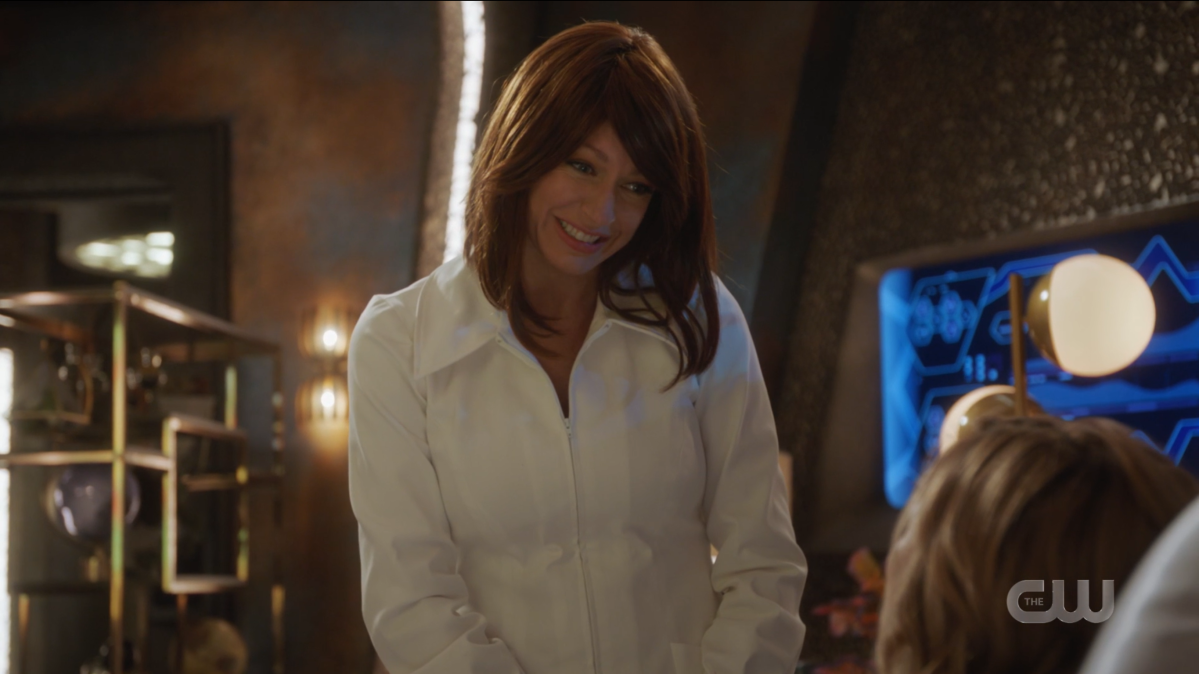 Sara tries to get Nurse Ava to set her free, but Nurse Ava says Sara has to prep her for “the transition.” Bishop comes in and starts telling her about how human greed destroyed the Earth, and he says he was the only survivor. He also says he’s the founder of AVA Corp and wants to restart humanity by making beings that can take human form but are superior to humans, biologically. Creatures that look like Gary, Kayla, and Amelia Earhart. 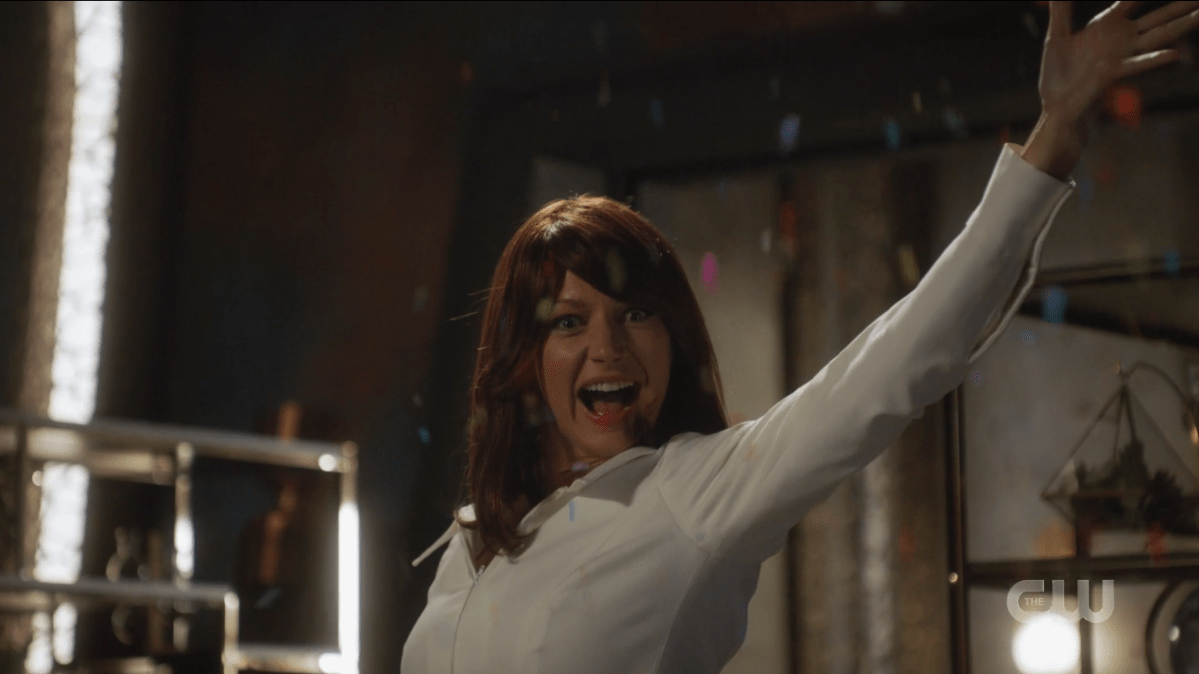 I’d give it a D for content but a solid B+ for presentation.

Sara thinks this is a terrible idea.

Bishop tells Sara he wants her DNA so she spits on the ground for him, but that’s not what he wants from her. He wants her to help her train these new beings, to instill in them the fighter spirit of “the woman who can’t be killed.” And Sara almost takes it as a compliment but she’s got people waiting for her back on.

Bishop tries to convince her that he made all the Avas, that even the one she fell in love with is his own accomplishment, and she calls him, and I quote, a “sick son of a bitch.” Bishop leaves her in the care of Nurse Ava, who sets her up with “all 15 seasons” of Wynonna Earp and suddenly I find myself wishing I was on this mysterious planet in the future.

We even get to hear a bit of the theme song, which made my body react before my brain even processed what was happening. 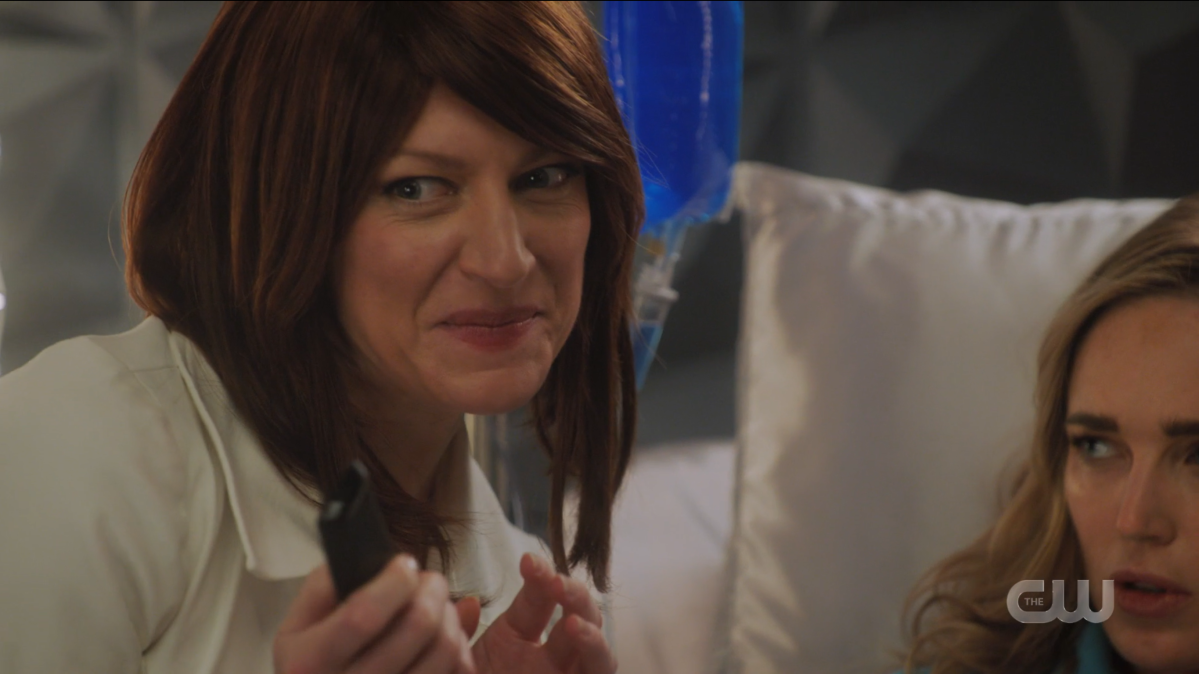 I’ve also (metaphorically) tied friends down and forced them to watch Wynonna Earp, so this is relatable.

I love when shows I love reference shows I love. Nicole Haught gave Sara Lance a shout-out in Season 4, and now Ava is returning the love.

When Constantine returns again, he catches Astra getting magic lessons from a painting. He starts to scold her and she calls him a hypocrite and tries to do a spell to shut him up but ends up swapping Aleister Crowley and Constantine. She immediately switches them back so, knowing it’s easy enough to undo, she decides to keep Crowley out for a while to get some up close and personal magic lessons. She threatens Crowley, says this is a limited-time offer that expires the second he does something she doesn’t approve of. And she’s very proud of herself for getting the upper hand in this situation. 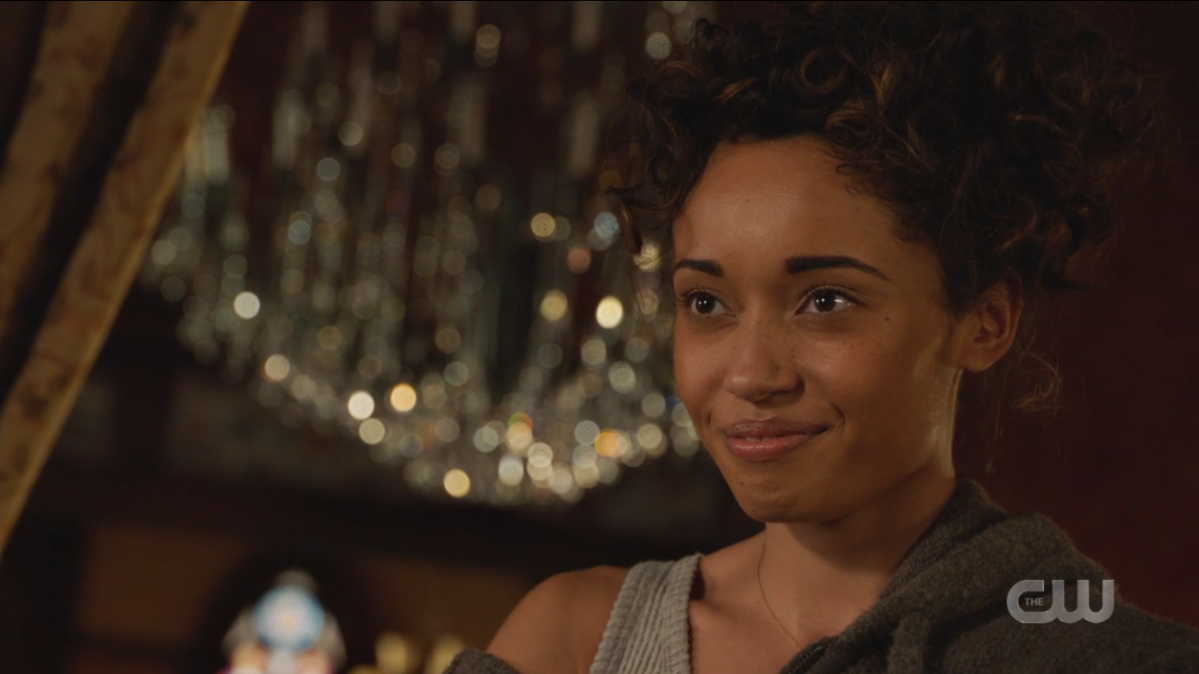 I would argue Astra was too smart to fall for Crowley’s bullshit but also she’s desperate, so.

Crowley teaches her to turn trash into treasure, change her outfit, update the manor’s interior decorating. Things she wanted to do that Constantine wouldn’t teach her. 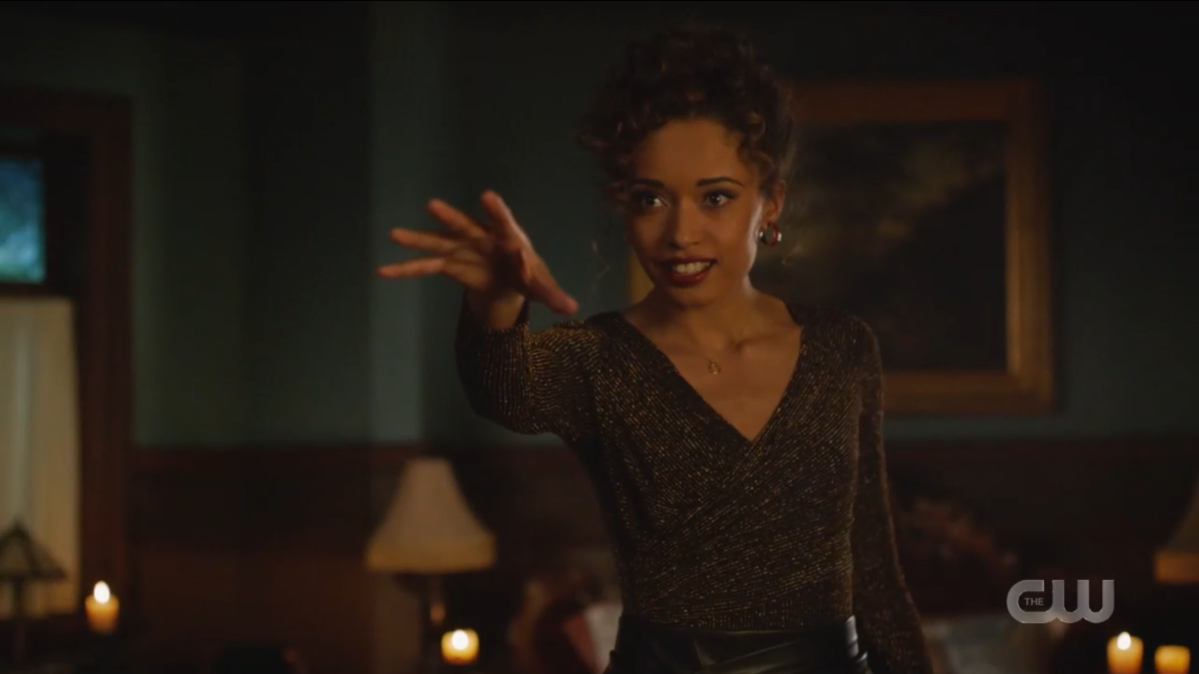 Crowley calls her a natural at the dark arts, which she attributes to her mother, but as she’s strutting around the manor and admiring her work, she finds the pile of treasure has turned to trash again.

He explains that the glamor is a starter spell, teases her with the promise of more power, and she takes the bait. She wants to level up.