Previously on Legends of Tomorrow, Mick found out he had a teenage daughter, Sara got blasted by a god and survived but ended up in a coma, and the Legends took Astra onto their ship so Charlie could weave her Loom and solve everyone’s problems.

We open with Mick trying to approach her daughter to explain why he missed her soccer game, and Lita almost macing him because ATTA GIRL. He offers to take her to roller derby, but despite ticking off a lot of queer boxes, Lita denies his invitation, making me think maybe she’s straight after all.

Lita starts to make excuses about having to study until Mick stages a big walkout via Timeship and suddenly she is very intrigued by her absent father’s mode of transportation. When he tells her his spaceship can time travel, Lita immediately asks about The Runaways, the lead singer of which is her namesake. (Which also gets her back some gay points, tbh.)

Up on said Waverider, Constantine got over his initial shock and is happy that Astra is on board. She thinks it’s interesting that the team seems to have gone from seeing her as a foe to a friend so quickly, but Constantine says that’s kind of their M.O.

They join up with the rest of the team, who is somewhat impatiently waiting for Charlie to finish meditating. 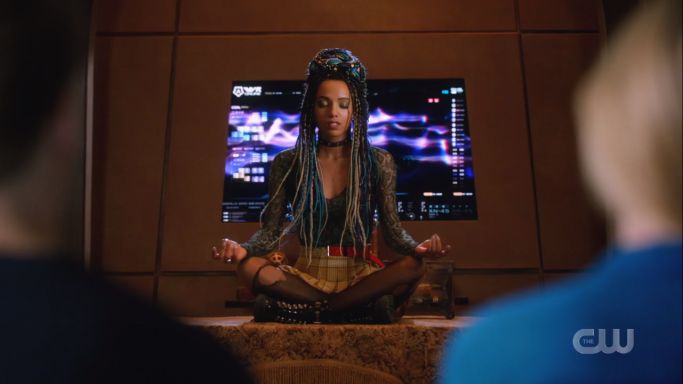 Charlie is me trying to sleep and the Legends yapping at/around her are my intrusive thoughts.

Gary busts in just then, as Gary is wont to do, with a Wishbone-esque puppy in tow, which honestly is the most appropriate kind of puppy to be on a timeship. He’s named him Gary Jr. and while he’s not ship broken, he’s still cute. (Side note: “Ship Broken” aka the Legends’ version of house-broken, is the name of this episode. If this was ANY OTHER SHOW, especially in the Arrowverse, I would have assumed someone was going to break up, and on Legends that would have meant Avalance. But I had absolutely no fear of that. Which goes to show how much trust I have in these writers. Trust that’s hard to come by lately.)

Everyone settles in, ready for Charlie to weave for the first time in quite a while, and though Astra and Constantine want Charlie to start with Astra’s mother, everyone else wants her to start with Behrad, except Ava who thinks Charlie should wake Sara up first. They all fight a bit, but when it comes down to it, Charlie chooses Behrad (for her girl Zari, perhaps), so that’s where she begins.

What’s hilarious and adorable is, instead of giving Charlie a wide berth, everyone just dons extreme sunnies to be near her while she weaves. Charlie turns the rings back into the Loom and starts to weave the complicated thread that is the time-traveling, timeline bending, fate defying Behrad. 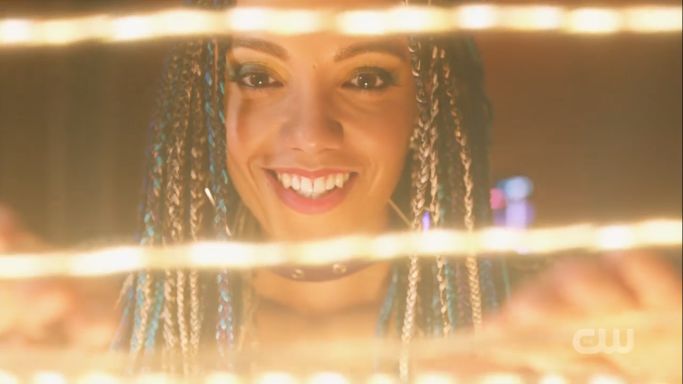 Maisie is a literal goddess and you can’t convince me otherwise.

Before she can finish and bring her crush’s brother back, everything kind of explodes and everyone is kicked back a bit.

By the time everyone gets up, the ship is down (except for Gideon) and Charlie admits that she’s never used the Loom on her own. So they turn their energy toward getting the ship back up and running so they can back to moving freely throughout space and time.

While everyone gets to work on that, Ava heads to the med bay to check on her girlfriend. Sara is still unconscious, but Ava still gives her the update. She misses her girl, she misses Captain Lance. Things are bad, and they sure could use a Canary right now. 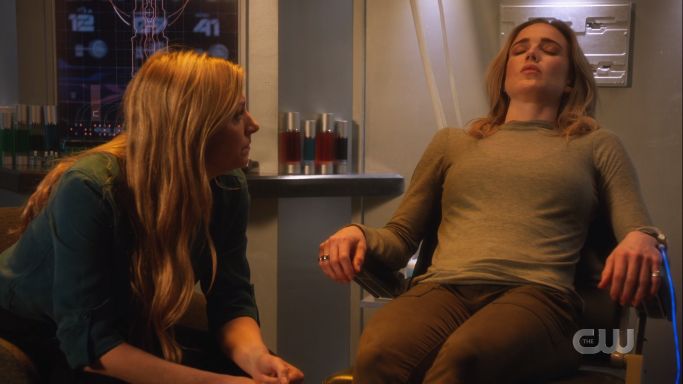 Surely Sara has a bed they could have put her in? She doesn’t look particularly comfortable.

Ava kisses Sara’s hand, and as if it was a True Love’s Kiss from a fairytale, Sara comes to. But when she opens her eyes, they aren’t the vibrant baby blues we’re used to seeing. They’re a bit muted and blown out. Ava takes her hand, and Sara is catapulted into a vision of the future where Ava lays dead on the ground. 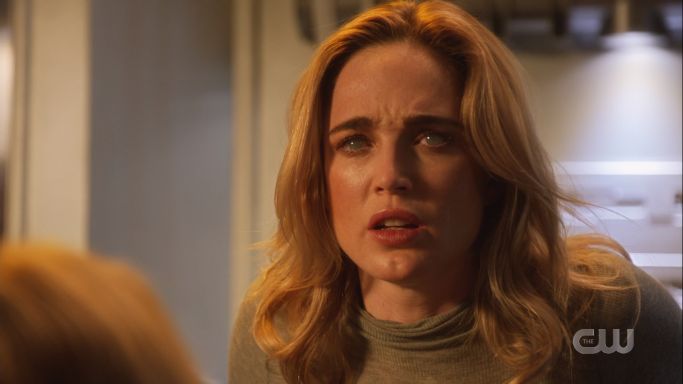 Which is a hearty no-thank-you from me, and probably all parties involved. Sara doesn’t tell Ava about this vision though. Instead, she puts a blindfold on, shrugging off Ava’s worries about her newfound blindness. First of all, she’s a trained assassin; the loss of one sense or limb isn’t enough to break her stride. Second of all, after all they’ve been through? This is nothing. This will require adjustment, but it is not the end of the world. Sara would know. 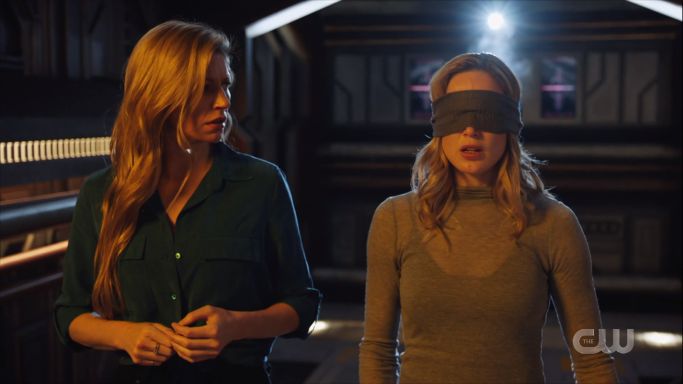 “Ava, calm down, I’ve died 900 times, a little loss of sight is honestly barely pinging my radar at this point.”

While blindfolded and strolling proudly alongside her girlfriend, Sara meets Lita. She’s surprised Mick’s teenage daughter is on her timeship, but takes it in stride. Well, that is, until she shakes Lita’s hand and gets a vision of Mick dead on the ground. She quickly shakes it off though, and focuses on Lita’s words instead: It’s cool that a woman is in charge. Which maybe shouldn’t be a thing we have to say out loud in 2020 but frankly it is. And it is, indeed, cool.

After meeting this child, Sara hears a dog barking, and truly wonders what her girlfriend has been up to in her relatively brief absence.

Elsewhere on the ship, Astra approaches Zari with a proposition. Behrad’s thread was complicated because of all the time travel and timeline manipulation; Charlie was hundreds of years out of practice…what if Charlie started with something simpler? Like Astra’s mother? And Astra knows no one would bite on this plan if SHE suggested it…Zari (technically new but not like…NEW) catches on and dutifully agrees to broach the topic herself.

Meanwhile, Mick is slowly but surely winning Lita over, by being aware of the French Revolution (read: being part of it) and by bringing in Nate and his steely skull to help her study.

Since Gideon can’t scan Sara right now, Ava takes her to Constantine to see if there’s something magical afoot. But when he grabs her chin to inspect her eyes, Sara gets a vision of Constantine lying dead, just like she saw Ava and Mick. But, still unsure what to make of it all, she lies and says she’s fine.

Before she finds out by hearing her sultry, sultry voice, Constantine warns Sara that Astra is on the ship, too. Sara immediately panics. “What if she goes on a stabbing spree?!” Ava thinks this is an awfully specific anxiety, and tries to calm her girlfriend down; Astra is here as an ally.

In an effort to get the Waverider back up and running again, Sara tries to walk Ava through fixing the ship when Charlie comes to check on the captain. There’s this brief, subtle moment when Ava holds her hands up like she wants to help Sara but then realizes Sara doesn’t need help so she puts her hands down and it’s very cute. Sara promises Charlie things are fine, nothing to see here. Get it! 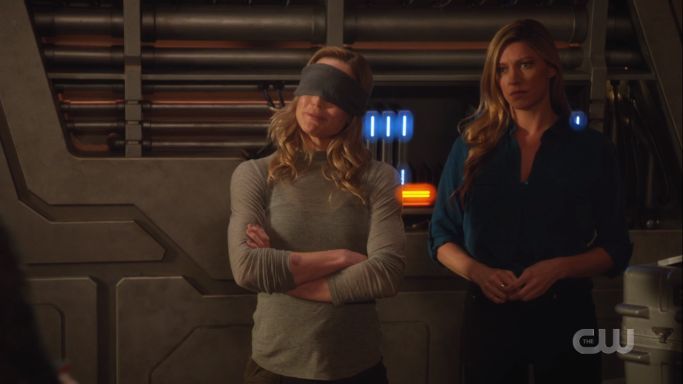 I love that Sara can serve ‘tude with half her face covered.

But Charlie knows that her going blind soon after being blinded by a god is fishy timing at best. Charlie finally gets Sara to fess up, and she admits that when she touches somebody, she sees them stabbed to death. Even when she brings her hand to her own face, she sees bodies strewn across the floor. Charlie says she has future sight, but Sara won’t hear it.

Charlie doesn’t understand why; why is the wielder of the Death Totem and Paragon of Destiny who has been brought back to life countless times and is dating a cl*ne and talking to an ancient deity shapeshifter having a hard time believing she could be having premonitions? And that’s when Sara finally admits what she’s seeing. 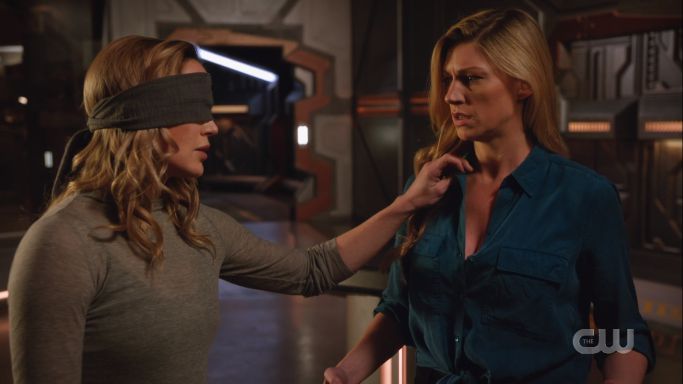 “I see this shirt on the floor later. AND NOT IN THE SEXY WAY.”

And why she refuses to believe it. “We don’t all die.” That’s not the fate she wants for her family.

Charlie assumes that it must be Astra, because whomst among them would turn on them besides the hitchhiker they picked up in hell. Ava doesn’t want to just assume, but Zari strolls in and tells them how Astra tried to manipulate her, and Gary found the ring case empty in the trash, so even Ava has to admit that things aren’t looking good for dear ol’ Astra. 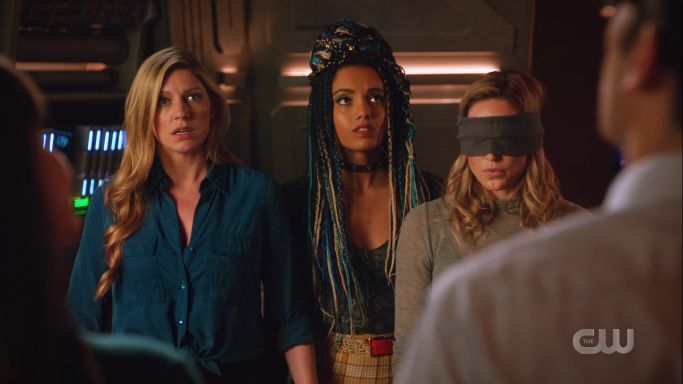 They put Astra in the holding cell, which she takes high offense to, but only Constantine is on her side of this. 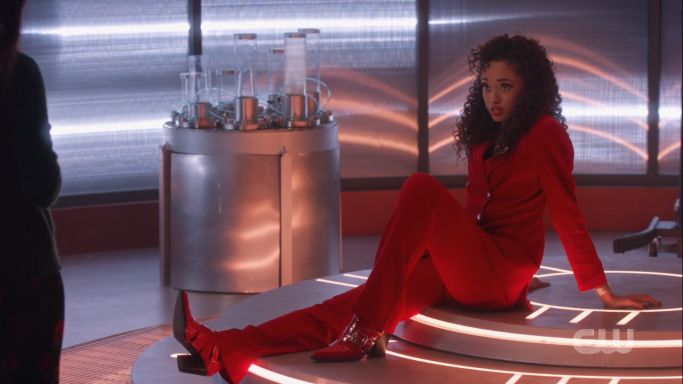 Mick is still trying to win over his daughter, who was unimpressed by his guns and his proclivity for stealing, but wouldn’t hate seeing an actual artifact from the literal French Revolution, so she starts to warm to him. (At this point I thought Lita swiped the rings not knowing what they were and being a klepto like her father. I was very, very wrong.) When she sees all the things he’s nicked, she thinks Mick should invest it, maybe back when the banks were first started, and Mick realizes she’s not ready for time travel or his treasure room.

Sara, Ava, and Zari head back to the server room to try to figure out what’s going on. 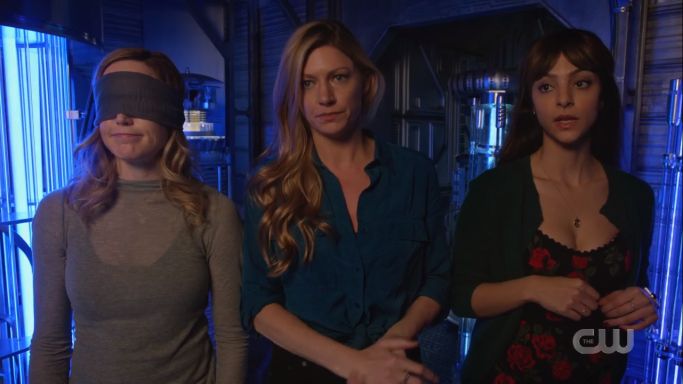 “Maybe this is Lex Luthor’s fault.”

Sara has another vision, and this time she sees her own reflection in the knife’s reflection, and she knows that she’s the one who is going to kill everyone. 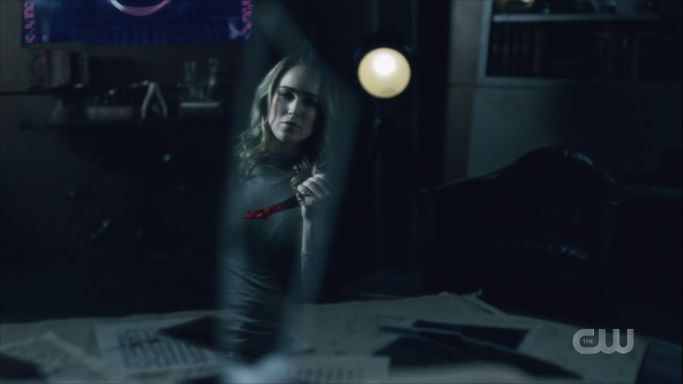 This is the point I had to look up the director. Her name is Andi Armaganian and I’m officially a fan.

Ava is like, “Okay but just don’t?” but Sara has been sleeper celled before so she panics and tells everyone to leave her locked in the med bay and to not let her out under any circumstances. Captain’s orders. 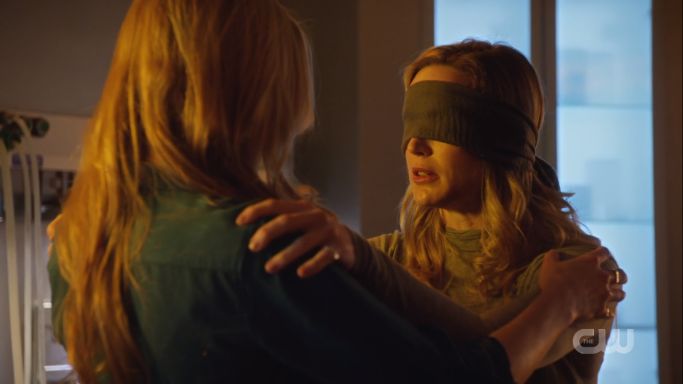 Ava gives her an “I love you” and her word and leaves her girlfriend in voluntary quarantine.