Despite having Astra in her ear, Zari channels the flannel-clad version of herself and starts hacking the security footage to see who stole the rings, all while giving Astra advice on how to gain the Legends’ trust. After all, very few if any of them come from squeaky clean backgrounds. They are not here to judge, but they ARE going to take precautions.

Zari finds some footage and sees Charlie taking the rings, then Zari throwing them away, and Nate asks them if they’re in cahoots, and oh how I wish the answer was yes. But they both deny having done the things they’re watching themselves do, and Nate believes it when he sees himself destroying Gideon’s fabricator. Charlie watches herself flush the rings down the toilet, and cannot believe her eyes. 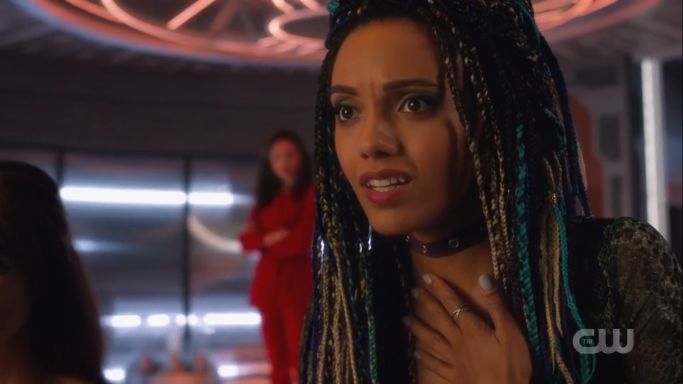 Me realizing there really is only one toilet on the Waverider.

Astra, from the brig, says that it’s clearly not her, so maybe let her out now, but they haven’t ruled out mind control, which sounds like a hellish trick, so she’s staying locked up for now.

In the med bay, Gary breaks social distancing rules to leave Gary Jr. with Sara so she can have some emotional support while in isolation. 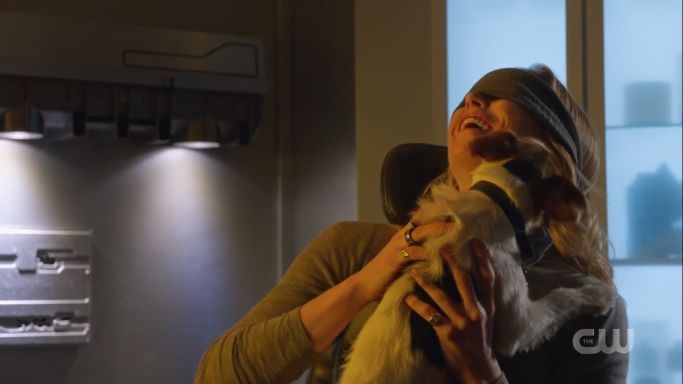 “What’s the story Wishbone? Do you think it’s worth a look? It kinda seems familiar like a story from a true crime podcast.”

But before he can leave her, Sara snaps Gary’s neck. A voice says, “Kill them all,” and she takes off her blindfold and prepares to do just that. 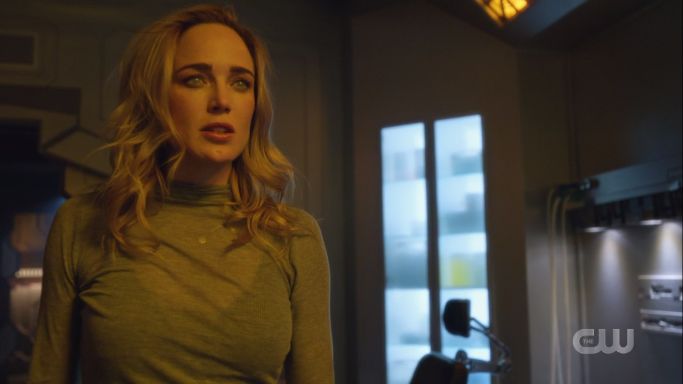 She can’t see well, but she looks good. :fingerguns:

Sara shakes her head and realizes she just had an awful vision, throws the dog back at Gary, and says his dog is a demon. She yells at the dog that she won’t listen to him and runs to find her team.

She starts shouting about how Gary’s dog wants her to kill everyone and Gary being alive proves she’s telling the truth, which frankly would sound insane on any other show, but here the logic tracks for me. Zari and Charlie review the footage again and see that Gary Jr. is there every time one of them was doing something shifty, at which time Gary admits that he “rescued” Gary Jr. from hell.

Ava says this sounds like something from the Son of Sam episode of her true crime podcast StabCast, and they realize that this hellhound is literally the dog that made David Berkowitz murder people.

And currently, he’s trying to get Nate to murder his friends. 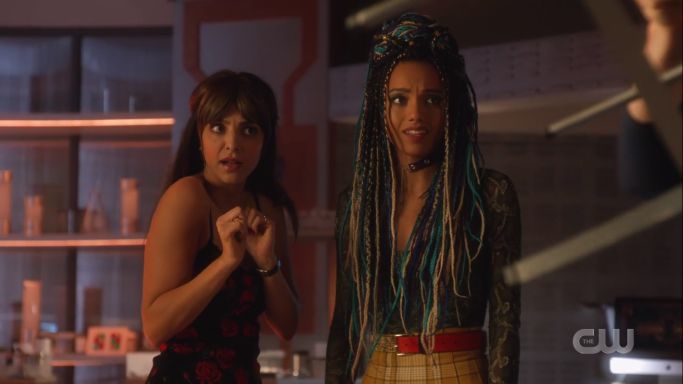 “Just because people ship us more than they ship you with anyone doesn’t mean you have to KILL us!”

Gary Jr. calls himself the Canine of Chaos and turns from Wishbone into a demon dog, sending everyone scurrying into Astra’s cell to protect themselves from him.

Sara and Constantine are on the outside though, and they realize Sara’s visions were right all along.

Once they’re safe, Astra says she knows how to get rid of this dog, and Zari defends Astra, saying that they should let her out because she was telling the truth all along, but as soon as they do, Astra locks them in tighter, and struts off in her hell-red suit. 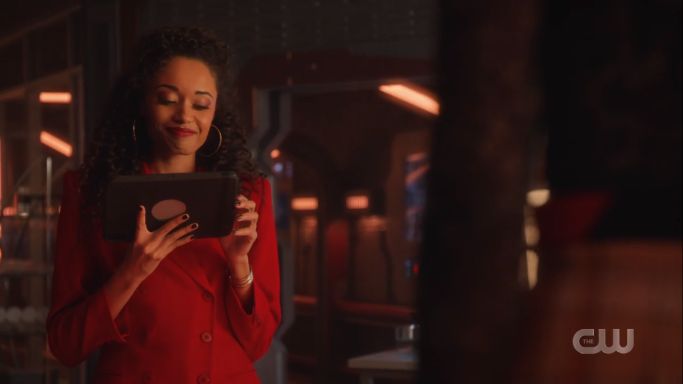 Astra would rearrange your Animal Crossing island so it’s disorganized chaos and smile the whole time.

Sara decides to lean into this premonition situation and grabs Constantine’s hands. She sees Mick getting eaten by the dog in the library, so they run there and save Mick and Lita. Constantine gets the dog to chase him instead, because he has Sara to protect him, and Sara is like, “I can’t see?” but Constantine knows she doesn’t need those beautiful baby blues to kick ass. 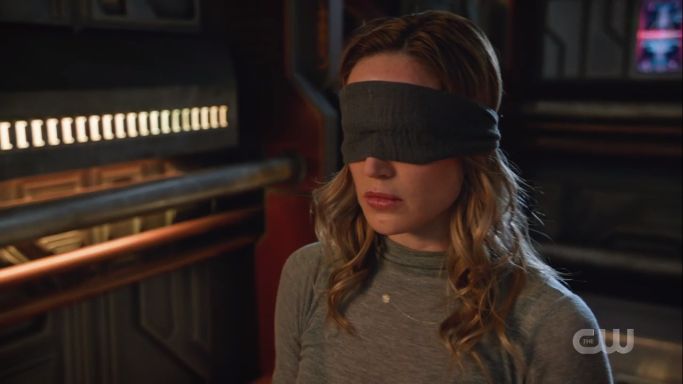 I’m sure this will come as a shock to you, but this gave me big Buffy vibes.

Constantine needs to know the dog’s true name to send it back to hell, and luckily Astra shows up just in time with that information.

Slowly they start picking up the pieces of their day. They get Gideon back online, Gary digs the rings out of the waste system, and also gets a new emotional support fluffball that he says is a bunny but also says he can’t feed after midnight.

Mick tries to have a heart to heart with Lita, but she doesn’t need to hear it. She understands him better after spending the day with him. And she wants to stay the rest of the weekend. She even calls him, “Dad.” It’s very sweet. 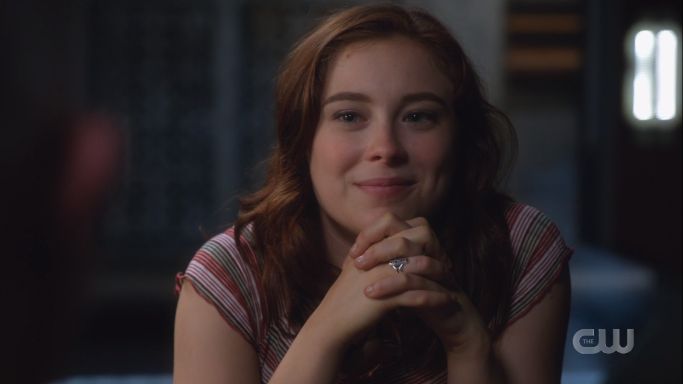 Wait til she gets back to school and tells her friends about her badass Aunt Sara.

Zari and Astra face off again, and Zari tries to reason with her, tries to get her to just give in and be her friend, but Astra won’t bite. 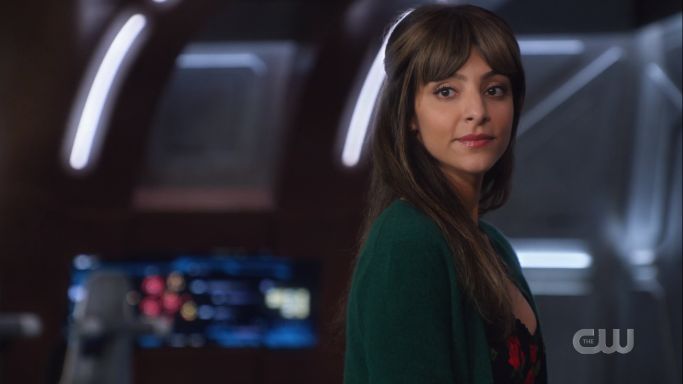 “I can be your two best friends, if you let me. Sometimes we have donuts.”

She does give Zari points for trying, and almost looks like she hates that she pushed her away as soon as she did it. 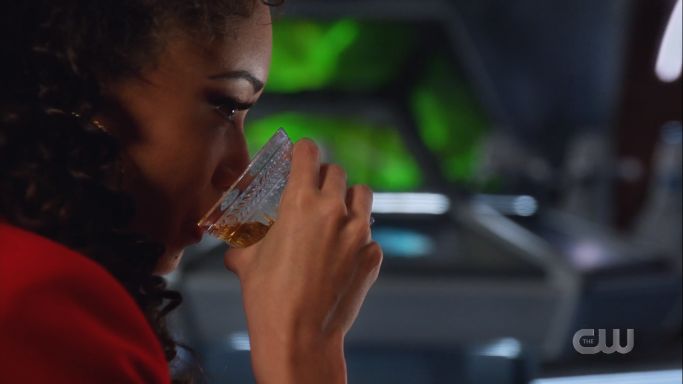 I hope we get to keep Astra for a little while. In fact…let’s trade her for Constantine.

Ava and Sara stroll down the hallway of the ship toward the med bay to see if they can figure out what happened to Sara’s eyesight, joking about what they’ll do with blindfolds later, Sara getting a sneak peak of it and liking what she sees. 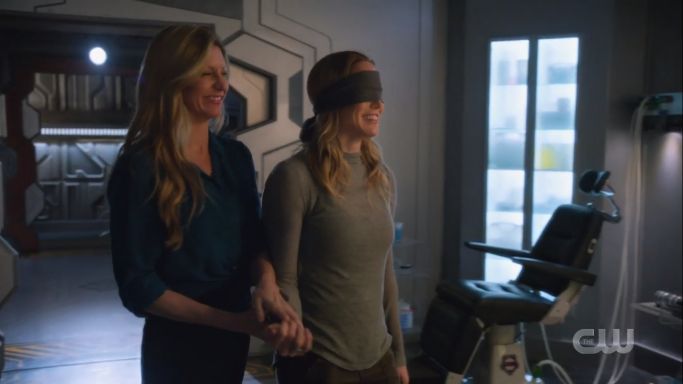 I trust this show with these two so much that even though the name of this episode was “Ship Broken” I never feared for this particular ship even a little.

And Gideon can’t sense anything physically wrong with her. Which I dig, if their point is, she just can’t see now. Nothing wrong with that. I have a feeling eventually she’ll be able to tune her foresight into being as good as regular sight, because I can’t imagine they’ll hide those perfect eyeballs forever, but I did love that, while surprising and requiring some adjustment, it wasn’t really all that big a deal that Sara couldn’t see. I also liked that they continue to call back to her time with the League of Assassins.

This episode was technically a bottle episode, since they didn’t leave the ship, and it had everything I love about this show. Sara being the captain, ensemble balance, humor, a mystery, supernatural shenanigans, a historical tie-in, and queer ladies in love. And they didn’t even time travel! It was a perfectly Legends episode and I loved it very much.

Next week, we’re back to traveling around and we get to see our fam as Greeks. No, not like ancient Greeks, like frat boys and sorority girls. And I, for one, can’t wait.