Lauryn Hill made waves on the Internet this week when she released “Black Rage (Sketch),” a track written in the style of “My Favorite Things” that recounts various acts of violence and injustice against the Black community in America. The track finally puts to rest the empty calls for “peace” amidst ongoing protests in Ferguson, Missouri since the killing of unarmed teenager Michael Brown.

Hill has reportedly played the song live for years, but released it online only recently, attaching the message “Strange, the course of things. Peace for MO.”

By recalling racial injustices from years and centuries ago, Lauryn Hill’s track reminds us that the scars have not yet healed — and progress is not yet complete. “Black Rage” explains in a cutting tone how the perpetual reminder that African-American lives aren’t valued here adds up to those who are living them, and the message is clear: we didn’t make this problem, and we’re mad as hell it’s still ours. 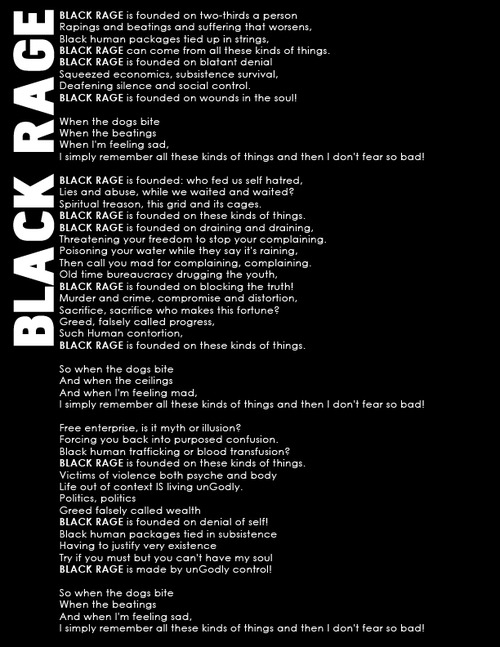 The release is more timely than ever, as detractors of the peaceful protestors being assaulted by police in Ferguson continue to discredit the activism by justifying Mike Brown’s death – or, worse, questioning the tactics and language of the movement growing in Missouri.

To question the anger, resentment, and disappointment folks in Ferguson feel toward their police force right now is condemnable. In a community where almost 70% of the residents are African-American but the police force – a force which has shot two unarmed black men to death in the last two weeks – is 94% white, polite discussion about the manner will no longer do. For too long, people of color who express hostility toward the racist and otherwise discriminatory institutions that shape our lives in America have been told to stay in our place. Recently, those folks have asked for “peace,” but peace doesn’t come from packing up the protest and going home, or watching your language when you’re taking to the streets. Peace isn’t about willfully ignoring ongoing acts of violence against your community. Peace isn’t about loving your oppressor, and peace isn’t about abiding them or making them feel good, safe, or happy. Peace is about justice — something that’s been denied to Black Americans for too long.

What we’re seeing in Ferguson is “Black Rage.” Sparked by one act but created by innumerable others, it’s a reminder of how far we have yet to come.