Chicana photographer Laura Aguilar, best known for capturing the livelihoods of Latina lesbians across different social classes and her nude self-portraits in relation to shapes, textures and colors of natural landscapes, died in a nursing home in Long Beach early Wednesday. She was 58.

She had long battled diabetes complications and was struggling with kidney failure at the time of her death. She spent her last day with friends and died peacefully, friend and art curator Sybil Venegas told the LA Times.

Aguilar was born in 1959 in San Gabriel, California and learned photography from her brother John Lee Aguilar in junior high. She was born with auditory dyslexia, so photography became her passion and another form of communication.

Initial acclaim for her work came through Chicanx communities and academic circles; more recently, Aguilar’s videos and photographs resurfaced and gained new popularity with a career retrospective spanning from 1976-2007 called “Laura Aguilar: Show and Tell” at the Vincent Price Art Museum in Monterey Park, as well as her photography being featured in “Axis Mundo: Queer Networks in Chicano L.A.” Both exhibits, part of the Pacific Standard Time: LA/LA series, gave Aguilar’s work another chance to shine but this time in the mainstream art world — all while her health began to decline. “I have been celebrated before and it was nice,” Aguilar wrote in an email to Artillery Magazine in September. “But now, I feel different because I have been trying to survive to get my work shown and it’s been a struggle. So it’s hard to think about my work being celebrated because I have been so focused on staying alive.”

I, unfortunately, discovered the profundity of her art after it was too late. I was unaware of her groundbreaking body of work that centered Latinas, lesbians, fat bodies, working class people and people with learning disabilities when I hearted portraits from her “Latina Lesbians” (1986-1990) collection on Tumblr. The “Latina Lesbians” series began as a project for a mental health conference with the goal of showing “a positive image of Latina lesbians.” The photos showcased gay Latinas gazing straight at the camera with handwritten captions by the subjects describing what it means to be a lesbian, woman and/or Latina. 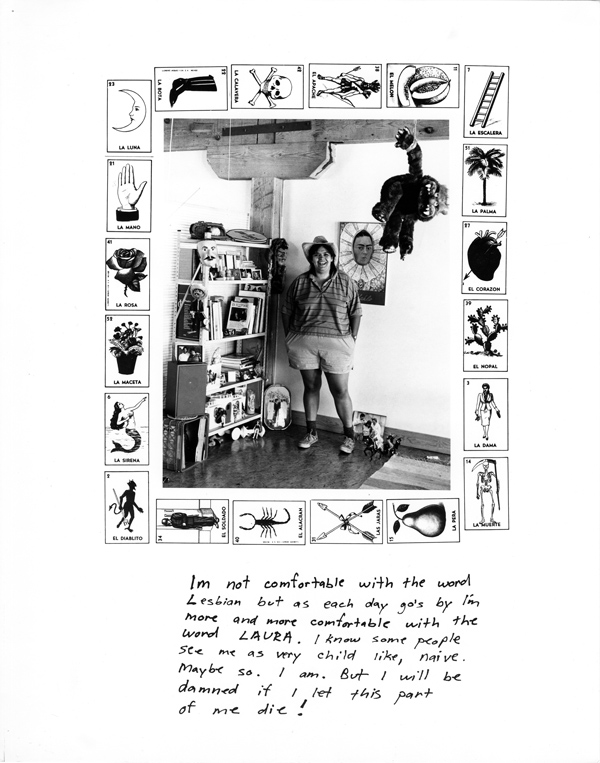 Included in the series, Aguilar smiles and wears a cowboy hat and stands in front of a Frida Kahlo painting in her self-portrait. Outside the lotería border surrounding the portrait, the caption reads:

In 1992 Aguilar debuted her second series, “Plush Pony,” in which she documented the working-class Mexican and Chicana lesbians who frequented a bar of the same name in LA’s Eastside. Aguilar described the scene as “always festive” and “very butch/femme.” 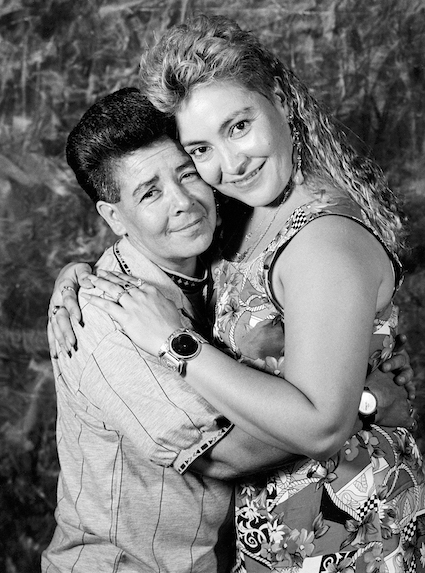 “The kind of work she was doing was ahead of its time in terms of representations of queer communities of color,” Pilar Tompkins Rivas, director of the Vincent Price museum, told the LA Times about “Plush Pony.” “Today we have these conversations about identity and gender fluidity. And I think it was so significant that Laura was documenting this scene almost 25 years ago.”

Aguilar’s most well-known piece, “Three Eagles Flying” (1990), a triptych of black and white photographs, illustrates the struggles of Mexican-Americans caught between two worlds. In the center panel, Aguilar is topless, her head tightly covered with a Mexican flag while an American flag covers her waist, and bound with thick rope. On the other two panels are the American flag and the Mexican flag respectively. ArtNews describes it:

“Aguilar appears caught between two worlds, attempting to negotiate a space for herself as an American citizen with Mexican heritage, treated as a foreigner in her homeland. Since the ’90s, the work has helped visualize a sense of double consciousness felt by many in the Chicanx community, in particular by Chicanas, as it shows the struggles its members face as people who understand themselves as being both American and Mexican, but feel as though they are unwelcome in either country.”

In other series, Aguilar positions her large body amongst natural landscapes and challenges the viewer to behold all of her and her beauty. In these photographs, she makes the curves of her body imitate and meld into the rocks, the pond, the ground. “She is at once part of the American land, and the viewer’s eye, and apart from them: in her own words, both present and persistently unseen,” writes Michelle Hart at the New Yorker. 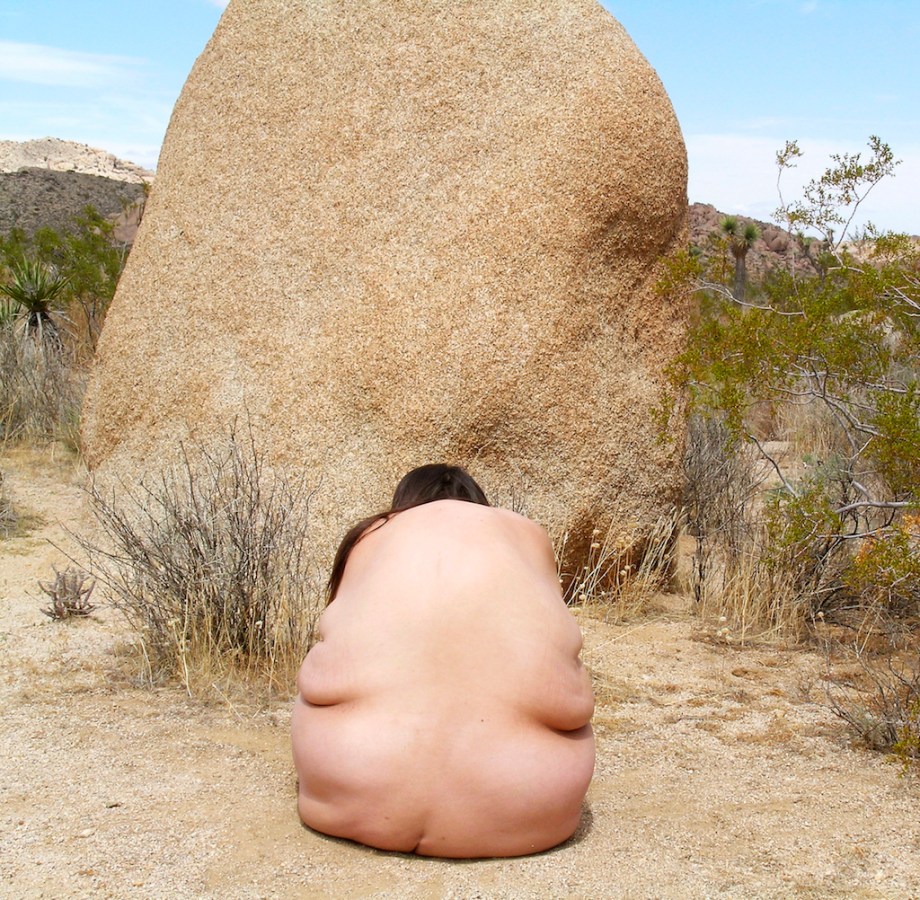 Aguilar’s art gives the marginalized and subcultures within subcultures — poor, fat, woman, lesbian, Latina — a place to be held and seen. Aguilar was a pioneer in sharing the faces and experiences of various Latina lesbians in the 90s, when there was very little representation. She forged a path for other round, brown queers like myself.