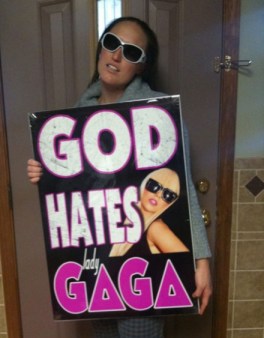 Have you fallen in love with Lady Gaga yet today? If not, read her response (posted on Twitter) when she found out that Westboro Baptist Church members were protesting outside the Monsterball in St. Louis:

“At the risk of drawing attention to a hateful organization, I would like to make my little monster fan aware of a protest being held outside the Monsterball in St.Louis tonight. Although we have had protesters before, as well as fundamentalists at the show this group of protesters are hate criminals and preach using lude and violent language and imagery that I wish I protect you all from.

Their message is of hatred and divisiveness, but inside at the Monsterball we preach love and unity.

My request to all little monsters and public authority is to pay these hate criminals no mind. Do not interact with them, or try to fight. Do not respond to any of their provocation. Don’t waste your words, or feelings, no matter what you hear or see.

You are more fortunate and blessed than they are, and in your heart just pray for them. Although I respect and do not judge anyone for their personal views on any politics or religion, this group in particular to me, is violent and dangerous. I wanted to make my fans aware of my views on how to approach, or rather not approach, these kinds of hate activists.

Be inspired to ignore their ignorant message, and feel gratitude in your heart that you are not burdened or addicted to hate, as they are. X” 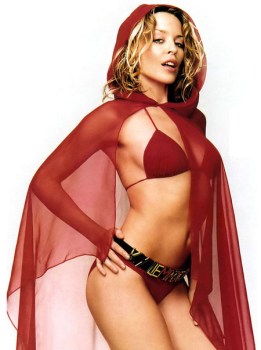 Are you a Kylie Minogue fan? Our scrupulous records indicate that if you are one of our readers based outside the US, you are basically completely obsessed with her. You will be pleased, then, to know that she will be playing A Lesbian in a new movie! A “heavily tattooed” lesbian, even! It is called Jack and Diane, and is apparently not that song your parents like. Here’s the synopsis:

“Jack and Diane, two teenage girls, meet in New York City and spend the night kissing ferociously. Diane’s charming innocence quickly begins to open Jack’s tough-skinned heart. But when Jack discovers that Diane is leaving the country in a week she tries to push her away. Diane must struggle to keep their love alive while hiding the secret that her newly awakened sexual desire is giving her werewolf-like visions.”

WELL. THERE YOU ARE. DID YOU READ THE PART ABOUT “HEAVILY TATTOOED.”

Also, I would like to share with you this gem from an “unnamed source”: “Kylie does have one love scene where she kisses a girl,” an unnamed source told the Post, “but her performance is good.” I know, I hate it when otherwise accomplished actresses and pop stars endanger their performances with hot lesbo action. Also, the entire f*cking movie is about their relationship! (And, like, werewolves, I guess.) How is there one love scene? I call hate crime. Oh wait I just read the article again, it’s that Kylie only has one scene, because she plays Tara. I’m going to assume this means that Jack and Diane themselves spend the entire film fisting. (@ontopmag)

Samantha Ronson continues to show her support for Lindsay (which we obvs interpret as her still-burning love for Linday) by visiting her at the sober living center. She went there yesterday (Saturday the 17th):

Dressed casually, the British deejay hopped out of her sporty Porsche 911 as she quickly passed by awaiting paparazzi while spending time with her legally troubled former girlfriend.

And while they kept their distance following a messy breakup last year, a source tells of Miss Ronson’s sudden emergence, “Sam wanted to distance herself from Lindsay when they split up. But Sam never stopped caring. She genuinely cares about Lindsay and just wants to see her get better.”

Talking to People magazine, the insider adds, “She gets it, she knows what Lindsay is going through and she knows she needs good people around her helping her down the right path.”

Was quoted saying something about how gay men are more acceptable in comedies than lesbians. Maybe she should look into nicestthingthemovie.com, just saying. (@queerty)

A food scientist explains how long you can really keep food in the fridge without having to throw it out and buy more. Let’s be real, that’s information you need to know. I mean, we definitely do. (@jezebel)

And um, speaking of us, have you checked out weareallmadeofkittens.tumblr.com today?

How’d she do in her first race after once again being cleared to compete? Oh, she f*cking tore it up, that’s how. 800 meters in 2 minutes and 4 seconds! You tell ’em, girl! (@heraldsun)

HI HELLO THIS IS ABOUT ALLEN GINSBERG. Watch this trailer if that makes you excited in your pants. If you find yourself uncontrollably excited or just need someone to talk to about your HOWL-related feelings, feel free to contact rachel[at]autostraddle.com. (@ohnotheydidnt)