Welcome to the seventh recap of the third season of The L Word Generation Q, brought to you by the same network that brought you the original L Word, a show about girls in tight dresses who drag with mustaches.

Specifically this is a recap of Episode 307, “Little Boxes.”

When I was a senior in high school, my best friend Krista directed a play I wrote called “Familyland” — the story of a ’50s Levittown family coming gradually unglued following the arrival of an unexpected dinner guest — for that year’s One Act Festival. I still remember Krista playing me “Little Boxes” on her CD player, and me agreeing with her that indeed it was the perfect intro music for our show. It was also perfect for the next time it appeared in my life, which was when it served as the intro music for the Showtime comedy Weeds.

Anyhow! As you will see in this Episode 307 recap of The L Word: Generation Q, this television event was not about the one-act play I wrote in high school, nor was it about a suburban Mom selling marijuana in the wake of her husband’s death. Nor was it about little boxes. What, then pray tell, was it about? Well, the only way to find out is to either watch it, read this recap, or both!

A quick note of order before we proceed: I’m continuing to count Sexy Moments but I won’t be doing little segments for each one like I used to because honestly there is not that much to say about sex scenes that are under 30 seconds long! But if we get any long ones later in the season, I will give them an orderly paragraph of my time.

We open on a gorgeous, sunny day in Los Angeles, California, where Finley has recently fallen victim to some very incongruous writing choices that have left her very dumped. Thanks to Carmax, however, she’s got a vehicle to sit in while attempting to piece together a coping strategy that doesn’t involve drinking.

Sure, honey, whatever you need.

Words cannot express how deeply I love this for both of them. Also I think my life would’ve turned out a lot better if I’d been able to just go live in Rosie O’Donnell’s house after a breakup instead of what I usually did instead. What did I do instead? I acted like Sophie’s gonna act all episode long! So without any further ado…

It’s Extra Long Morning Time at SoMiMar’s and there’s a lot happening: Micah’s running a solo Jamba Juice for his buddies, Sophie got her nipples pierced and is soothing the burn with packs of frozen peas, and Dani’s buzzing around, stoked for that evening’s Fletcher release party.

I told her I liked nipple play but I did not mean that I wanted her to bite my nipples so hard they bled for hours, you know?

Dani asks Sophie if it’d be weird for Dre to attend this episode’s Big Event (the Fletcher release party) and Sophie says it’s actually completely and totally chill absolutely 100% will not have any impact on her whatsoever at all.

Well, I add one cup frozen blueberries, 1/2 cup raw pepitas, 1 pitted date, 1 tablespoon hemp seeds, a cup of water, one ounce of beetle’s blood, the feather of a falcon and three tablespoons of Bette Porter’s tears

When pressed about her feelings regarding last week’s sudden breakup, Sophie declares herself “a little numb,” just like her boobs! Dani sneaks a peek at Sophie’s new nips and the exes-to-friends energy here with both of them and Micah is invigorating.

We then cut to the Aloce Show Emporium, where Alice has invited Tom for a comfortable conversation about their possibly destined romance, which he begins by running right into a glass door. Honestly Tom is such a delight, you know?

We learn quickly thereafter that Tom’s rejected marriage proposal to Alice took place on the top of the Eiffel Tower. Here are some ideas that seem less romantic but are not: getting down on one knee outside a gas station in the rain, hiding an engagement ring in a baked potato, standing on a car in city traffic demanding all nearby drivers to “honk in the name of love,” interrupting your active crying over your close friend’s death by saying “would you marry me” to your girlfriend who is gardening for some reason, performing a mash-up of “Hand in My Pocket” and “Feel the Earth Move” before asking your girlfriend to “mash up for life” with you. All of those ideas are better than this idea!

That said if anyone reading this proposed or was proposed to atop the Eiffel Tower I bet it was super cute!

What if instead I’d proposed to you on the top of the Eiffel Tower replica they have at Kings Island in Ohio?

Alice has got something she’s eager to chat with Tom about, but Tom cuts her right off with his assumption of what she wants to talk about — she’s obviously thinking about her next book and cannot do it without him!

Womp womp wompity womp off we go to California University, where Angie is looking delightfully dykey while discussing her upcoming romantic weekend with her professor who is also her boyfriend. Apparently he’ll be doing a reading out of town and Angie’s his special guest and Bella’s so excited for Angie to lose her V-Card and is insisting that Angie pack ten thousand condoms for this occasion.

We then return to Carrie’s Home for Wayward Finleys, where Finley’s just burnt a lasagna and, in the grand tradition of a person recently dumped for confusing reasons, is certain this means she’s an overall failure at life with zero skills. 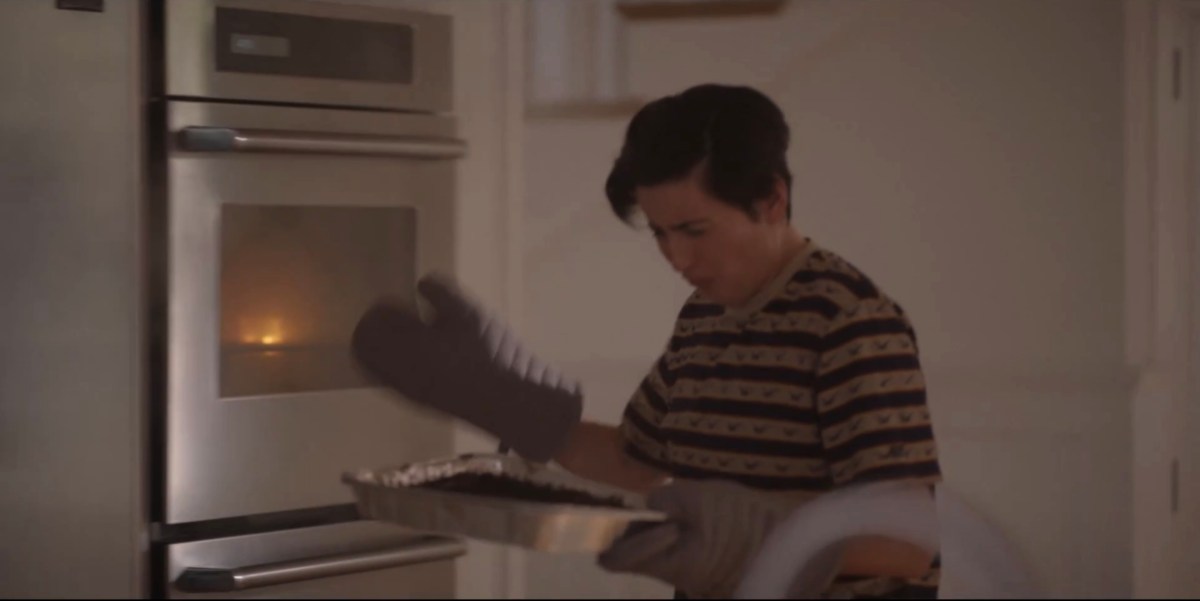 Carrie, however, has no time for such self-defeatism! She embraces Finley and insists Finley sub in at her bowling match that evening. I love this for them! 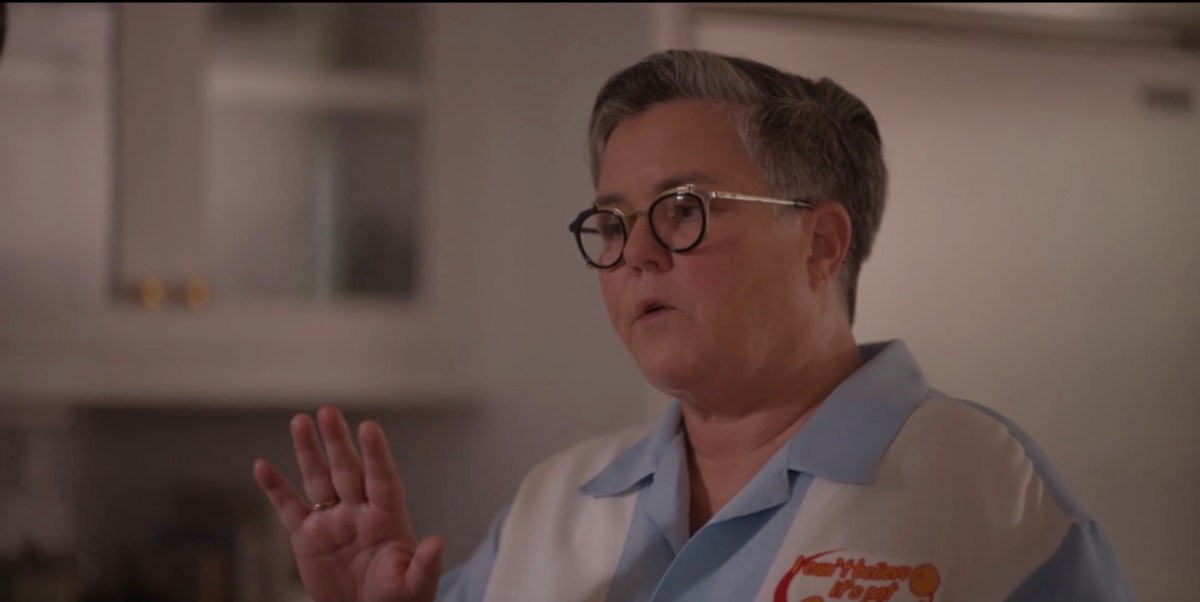 Listen, I burned three batches of Fimo beads in 1997 and it didn’t stop me from continuing to pursue arts and crafts

This is incredibly realistic lesbian recreational league sports representation here with the desperate needing of a sub and the degrading of one’s own abilities when pitching said sub.

Back at The Aloce Show Offices, Tom’s still pitching book ideas, including the very promising concept of a tongue-in-cheek self-help book… or perhaps a cookbook? She could learn to cook and then make a book of recipes, easy peasy! Here, I made a mock-up for Alice’s self-help book: 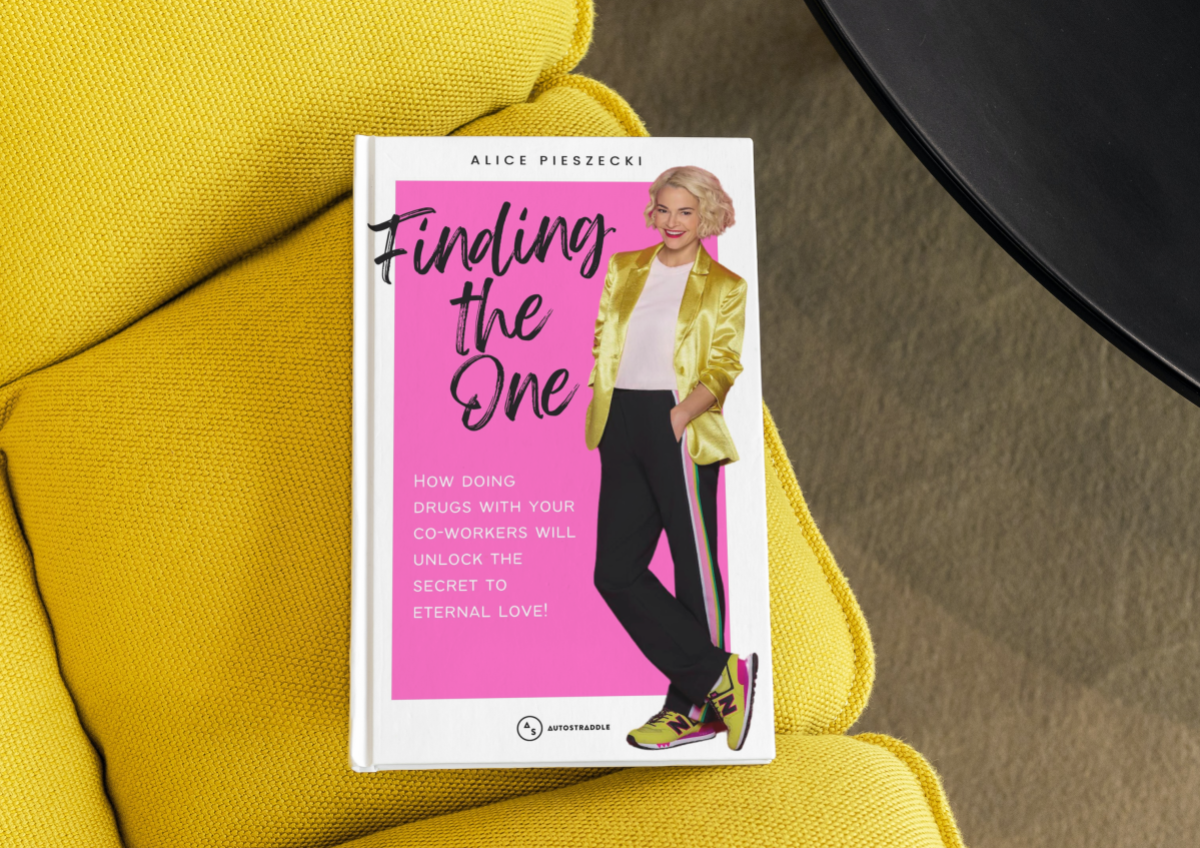 But then! Before Alice can effectively redirect the conversation, they both hear a noise coming from the wall and Alice is incredibly relieved that Tom hears what she hears: ghost cat!

What I THINK, Tom, is I think that Ellen DeGeneres sent a little ghost to spit in my face!!!

Alice: Oh my god, thank you! I’ve been telling Sophie there’s a cat in here and everyone’s like oh you’re going crazy and then a PA was like oh it’s a ghost and then we spent half a day looking for an eco-friendly ghost removal service.
Tom: How’d that go?
Alice: It was like Ghostbusters but they showed up in an old Prius. It was a scam. A ghost scam.

Although I’m still not rooting for Alice and Tom as endgame, they have such fantastic comedic chemistry I wish he was still on the show!

Back at SoMiMar’s, Maribel is sick of looking at sperm donors online and I agree and think she should instead be looking at designer sneakers she can’t afford online, like I do. Sophie saunters into the room like an impulsive queen, announcing her intention to get her hair done, which nope has nothing to do with seeing Dre tonight not at all!

Oh, I’m not the girl I was or used to be … bitch I might be better

Micah’s been begging Maribel to join him for the Fletcher Album Release Party and she’s been resisting his insistence… but now? Now she has no choice but to attend ’cause Sophie’s overall vibe is heading in an undoubtedly chaotic direction and well, you know how it is with sisters… Sisterhood is powerful.

It’s Fletcher Field Day time! Dre’s here and Dani’s stoked to see them ’cause there’s some people she wants Dre to meet for professional reasons, for example Fletcher and also Sophie Suarez, a producer for The Aloce Show who Dre once had several fingers inside.

Personally I think it’s completely fine to fuck on the first date, yes/no?

But it’s also clear, as Dani fingers a smudge on Dre’s shirt and they attempt to speak to each other professionally, that there is something buzzing between them and that something is “sexual tension.”

We then get on our scooters and scoot on over to the Hollywood Bowl(ing Alley), where rec league night is thriving and reminding us all that masc lesbians look great in bowling shirts.

Carrie: [reading] Hi Soph hope you’re well [stops reading] No it’s not good, I’m deleting it.
Finley: What do you mean? You didn’t even get to the part where I apologized!
Carrie: It’s too soon Finley!

Everybody needs a butch lesbian Mom to erase their text messages for them, you know? And if not, they could just read this book: 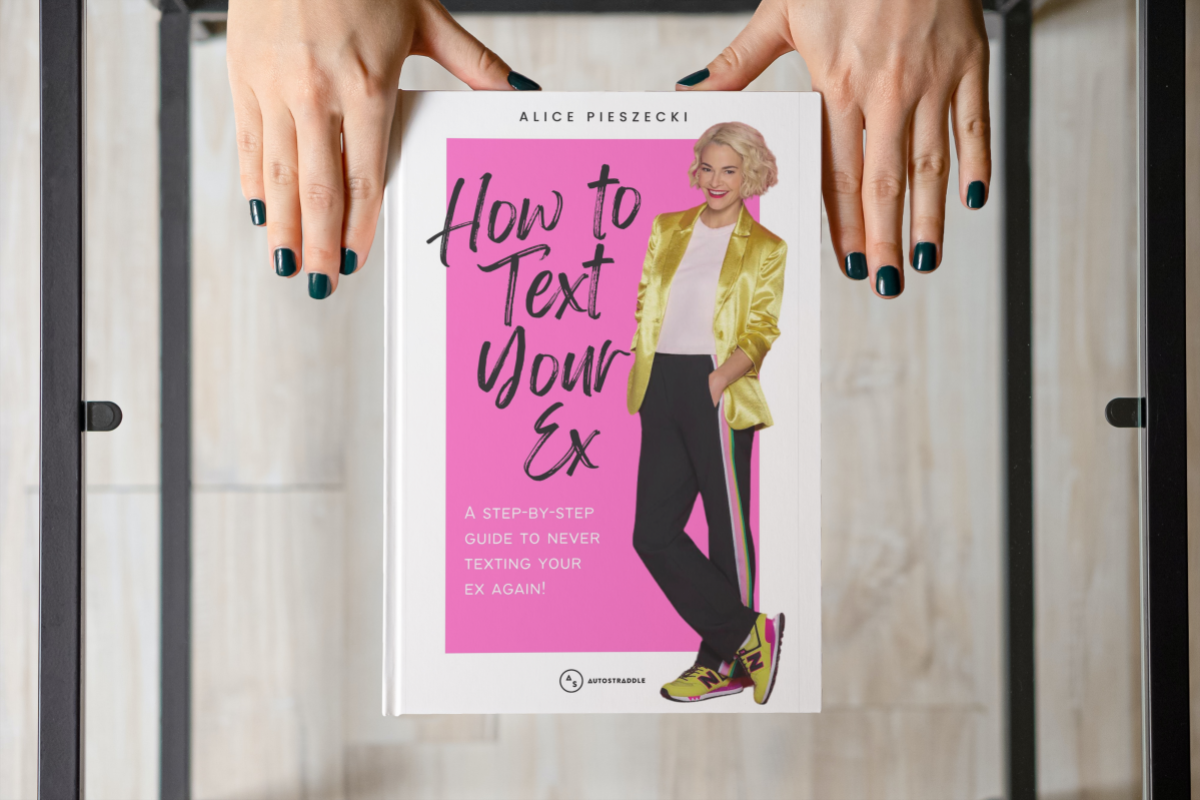 Alternately you could read this article

Anyhow, Finley’s thrilled to discover she’s pretty good at bowling and shocked to discover that Carrie’s yet to ask Misty on a date.

Carrie: I’m sorry, you haven’t asked the plumber out yet?
Finley: She has a name, it’s Misty! 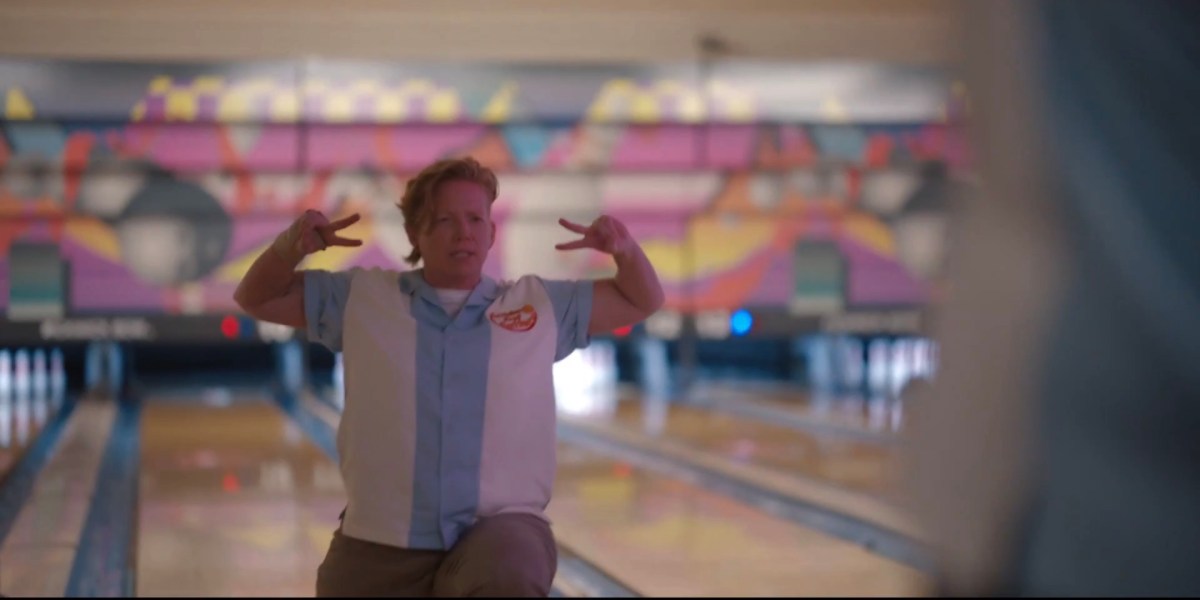 Carrie’s happy with just being friends: she likes bowling, hanging out a little bit every week. It’s good enough for her. Unfortunately, it isn’t good enough for Finley, who tonight is playing the role of “precocious child in a rom-com who fears his father will never find love again.”