Now that regular old teevee is being forced to compete with streaming services like Amazon and Netflix for ratings and ad revenue, all networks are looking for a new way to get eyeballs on their new fall shows. NBC surprised everyone when it dropped the pilot for its new primetime series, Kim Davis: Jesus Clerk, this afternoon, presumably to get ahead of new episodes of Empire, which dominated ratings when it premiered last year. So we figured we’d roll out a recap real fast and see if y’all are interested in seeing full coverage of the show.

You can actually watch the pilot episode here. 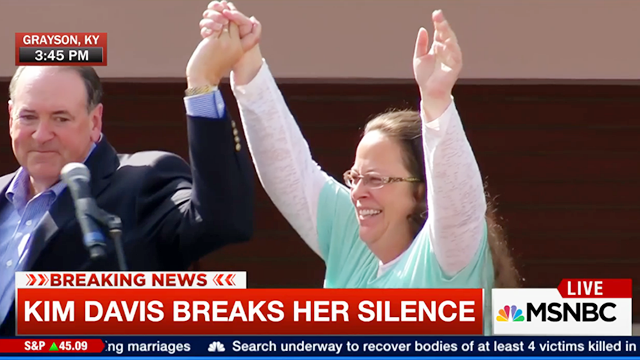 The Constitution stacks the odds / Still we take to the street / For the kill with the skill to survive!

The show opens outside a detention center in Kentucky where a middle aged woman named Kim Davis emerges into a crowd of superfans while “Eye of the Tiger” plays triumphantly. She is flanked by two elderly white men, each clutching one of her hands. The elderly white man on her right looks like he might be played by Peter Graves. I thought he passed away a couple of years ago. I guess not! And the elderly white guy on her left is played by Kevin Spacey in a fat suit, I think. Weird. I wonder how he got the time off of House of Cards.

Anyway, these appear to be our three main characters. Oh, wait! Here comes another white guy in overalls and a hat that is like if a straw cowboy hat had a baby with one of those old timey card dealer visors with the green plastic bills. He grabs onto Peter Graves’ hand and holds their intertwined fingers up for the crowd to see. The crowd is going crazy! They’re waving around cardboard cutouts of the alphabet. A lot of Ts. And some signs that say like “Enough is enough!” and “Freedom of religion!” And “Eye of the Tiger” is still just a-blastin’ over the loudspeakers. 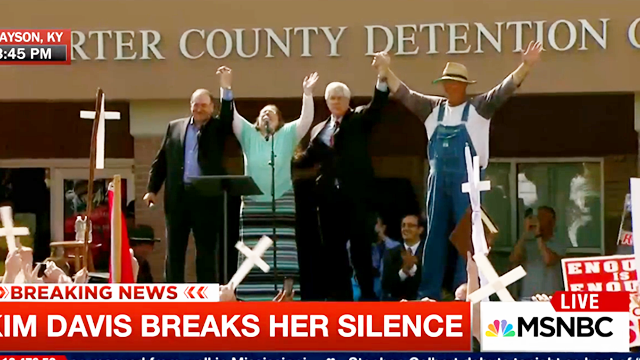 Practicing for the gold medal podium at the Bible Olympics

Apparently, Kim Davis is in a poly relationship with these three guys, which of course is praised very highly in the Bible. Everyone was doing it! King Solomon, a dude God said was the wisest guy ever to live, he had like 300 wives and 700 concubines. So I guess these four people are really into traditional marriage — that must be what all the Ts are for that everyone is waving around, Traditional — and Kim got arrested for it because the damn United States government is always trying to get involved and go against what the Bible teaches about God’s plan for marriage.

Kim Davis and her husbands are standing strong, though. And the crowd is wild for it! (Although, all of them are white, which is a weird casting decision if this show actually expects to compete with last season’s really successful, racially diverse shows.)

Chubby Kevin Spacy hands Kim a microphone and she cries and laughs into it for about ten minutes and almost falls over a couple of times. Weird editing, actually. This episode is already dragging. ChubSpacey smacks her on the shoulder a little bit and she pumps her fists and laughs some more while the white people keep screaming. ChubSpacey wipes some tears from his eyes. 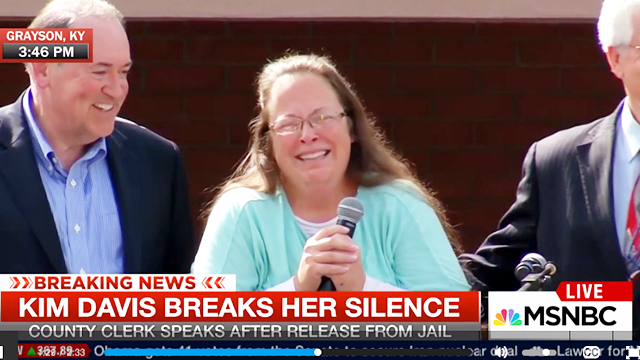 I love the Old Testament! I love the part where women get beaten to death for bleeding on stuff during their periods!

Kim Davis hugs her favorite husband, ChubSpacey. (I say he’s her favorite because he’s practically groping her the whole time and she’s looking at his face like he’s heaven.) Then Kim Davis hugs her Peter Graves-looking husband. He’s a little less familiar with her, so I standby what I said about ChubSpacey being her favorite. Apparently her third husband is named Joe? I dunno. He’s really underdeveloped in this episode. I have no idea what his motivation is or what he’s about. Pretty thin writing, to be honest. He doesn’t even have a single line of dialogue. 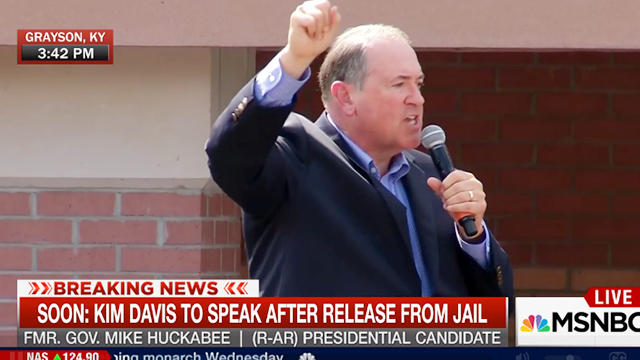 President Snow, fire is catching, and if we burn, you’ll burn with us! 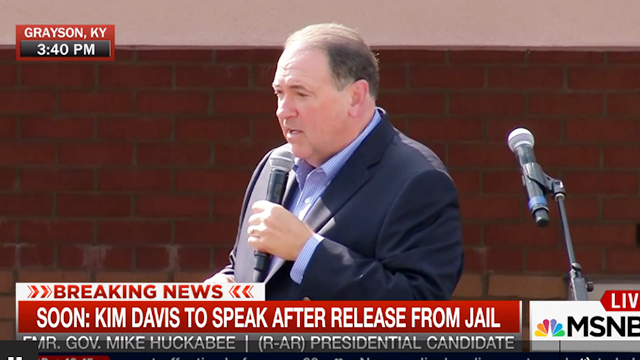 Oh! Kevin Spacey’s character is named Mike Huckabee. Oh, shit! And he’s running for President of the United States of America on a platform of Traditional Marriage! Polygamy and rape in the White House, then, I guess. I wonder if he’s going to get elected and try to pass a law that says a brother has to marry his dead brother’s wife! Or that if dudes spill their sperm on the floor they gotta get stoned! Traditional marriage is some salacious shit.

Mike Huckabee: Let Kim go! But if you have to put someone in jail, I volunteer!

He says he’ll spend eight years in the White House or eight years in jail but he won’t spend eight years under the tyranny of the checks and balances that were built into the branches of the United States government by the Founding Fathers. He says God has a habit of intervening in America’s history, like when he wiped out all the Native Americans with blessed smallpox-infested blankets. And then, verbatim:

The crowd loses its goddamn mind at that point. If life is like a box of chocolates, this day is their gooey caramel center. 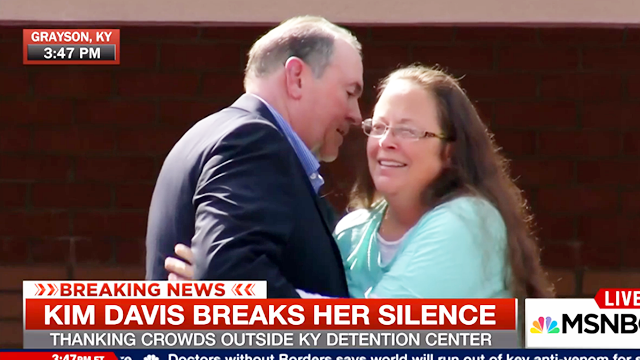 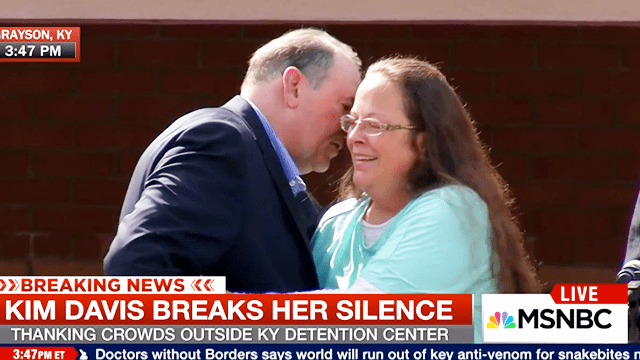 But maybe we could just try and see.

Hmm. Well, I mean, I guess it was an okay first episode. The premise is pretty unique. Biblical marriage is weird as fuck and if they’re willing to explore it, I guess it could be interesting to watch. There’s a lot of batshit crazy stuff if they expand out into the whole Old Testament, but I’m not sure how well a non-HBO channel would fare with that. Like remember when Elijah conjured those bears to eat the faces of 42 children who were making fun of his bald spot? (4 Kings 2:23-24) Or like those guys who raped that concubine until she died and so her owner chopped her up into 12 pieces and sent her to all the tribes of Israel? (Judges 19:22-30) Or when David wants to marry Saul’s daughter so Saul demands 100 foreskins, and David goes out and collects 200 foreskins just to be on the safe side? (1 Samuel 18:25-27) Or the time God got so mad when Moses tried to look at his butt? (Exodus 33:23)

Anyway, there’s a lot of source material to work with, so it’s really lazy writing that leads to Kim Davis’ third husband being so underdeveloped, and the Mike Huckabee character ultimately just spent the whole time quoting Tom Hanks movies and The Hunger Games. He seems like a dolt. I don’t understand why he’s her favorite.

I don’t know if I’ll keep watching. This show definitely isn’t going to pass the Bechdel Test. What did y’all think of the pilot of Kim Davis: Jesus Clerk?