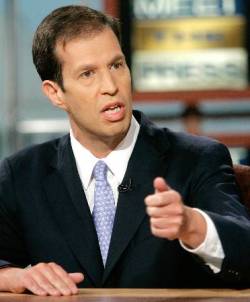 We announced on Thursday former RNC chairman Ken Mehlman’s official homosexuality, which he shared at a press conference that caught everyone’s attention despite the fact that he hasn’t been particularly active in the Republican party since 2007. That particular post was pretty light on the reflection and analysis, as we judiciously chose to deliver this news to you sooner rather than later and forgo researching Mehlman’s fourth-grade crushes. In the 48 hours following, however, everyone on the internet has had time to sit back and ponder what this all means, and have presented their arguments. Are you ready for the roundup?

+ The Daily Beast says that Mehlman’s coming out is only a chip in the Great Wall of Republicans’ Opposition To Gay Issues. They also have a really interesting little retrospective on babygay Mehlman’s growth within conservatism. That year Ken Mehlman was 12 years old, and already a committed Reaganite who, a few years later, would become a devoted volunteer in Republican campaigns in his native Maryland. Decades later, as RNC chairman, Mehlman served as one of the architects of George W. Bush’s 2004 reelection effort. Part of the effort was built around a series of ballot initiatives that sought to ban same-sex marriages. In conversations with Ambinder, Mehlman claims to have resisted this tendency, and to have made the case for civil unions and a more inclusive approach. But unlike his hero Ronald Reagan, he was unwilling to take a public stance that might jeopardize President Bush’s reelection, or, more cynically, his prominence in Republican circles. (@dailybeast)

+ Mehlman’s coming out was cool and I’mma let you finish but he’s no Rosie: “Rosie O’Donnell avoided any apology in her public declaration. “I’m a dyke!” she proclaimed at a stand-up show. “I don’t know why people make such a big deal about the gay thing.” (@dailybeast)

+ Gays and liberals aren’t willing to overlook Mehlman’s support of George W. and welcome him into the fold. If you can’t make it through the article’s borderline-derisive use of the word “blogger,” just read this: “Joe Jevris, a gay activist and blogger, compared Mehlman to Roy Cohn, a lawyer who remained in the closet but joined Sen. Joseph McCarthy in targeting gays in the 1950s.”Gee thanks,” Jervis seethed. “That’s like offering to help rebuild a house when YOU were the f—er that helped BURN IT DOWN.” Activist blogger Mike Rogers wants an apology from Mehlman, the Atlantic reported. Rogers called the campaign manager “horridly homophobic.” “I want to hear from Ken that he is sorry for being the architect of the 2004 Bush reelection campaign.” (@nydaily)

+ Has Ken Mehlman ever had sex? Why are we wondering this? Have we finally reached the point where life imitates Judd Apatow movies? (@gawker)

+ Ken Mehlman has already done “the most important thing he can do” for gay rights by coming out. GOProud’s position is roughly THANK GOD FOR KEN MEHLMAN, LET’S PUT HIS NAME ON THE SIDE OF A BLIMP AND HUG. (@joemygod)

Speaking of famous people who are out or maybe not, we’re still not done with the Prop 8 trial, which means we’re still not done talking about Judge Walker’s gayness. Today the LA Times wonders about the widespread reporting on Walker’s homosexuality – even if it was true, was it ethical journalism? Judge Walker himself has never announced to the media that he’s gay; when the stakes are this high, is it okay to rely on word of mouth as fact? “In the coverage of this story, many news outlets — including The Times — have reported that Walker is gay. Some, such as the New York Times, attributed this fact to “published reports.” But the Los Angeles Times, among others, has not cited a source for this information. In the wake of these reports, readers have called and e-mailed with the same fundamental questions: How does The Times know Judge Walker is gay? And why is it relevant?” (@latimes)

The Gay and Lesbian Activists Alliance has released their ratings for the primary candidates for the September 14th primaries in Washington, DC. If you live in the area, 1) don’t forget to vote and 2) think about checking this out beforehand! (@glaa)

The interesting social discrepancies that arise from our political affiliations – like the fact that “red states” consume more porn than blue ones – always fascinate us, and the new book Red Families, Blue Families is no exception. It examines the fact that “pro-family” social conservatives have high divorce rates, sometimes higher than their liberal counterparts, and explores some possible reasons. “What started us in looking at this was that as we watched the ’04 election and we saw the moral values commentary unfolding, we looked at the polling and divorce statistics. So our first “ah ha” moment was looking at the correlation between divorce rates and family characteristics and how likely a state was to vote red or blue. As we probed further, we saw an amazing congruence between how a state voted and their divorce rate.” (@boingboing) (@bookslut)

British spy Gareth Williams was mysteriously murdered, and in a soap opera-esque twist the murderer seemed determined to make the crime look as gay as possible. “Police sources believe one theory is the spy’s killer may have planted a trail of clues to make it seem as though he was murdered by a gay lover.” Those clues include what the Daily Mail adorably calls “the phone numbers of gay escort men,” found in his flat.” (@awl)

I’m going to let Melissa at Shakesville take this one, because she describes this video that the Family Research Council made to protest the idea of a DADT repeal better than I could: “The Family Research Council is running a new ad voicing their opposition to the repeal of DADT. There are a lot of things to love about it, but I think my favorite part is the implication that there have never been, and are currently not, any gay servicemembers. Which, were that true, would render DADT unnecessary, anyway—now, wouldn’t it? Of course, logic is not one of the qualities for which members of the Family Research Council are generally known.”

Rachel has written 1123 articles for us.