Kate Leth is well known for her comics on Tumblr as well as her work with Adventure Time, Locke and Key and plenty more. She combines a sharp, but often approachable wit with a vast knowledge and love of the comic industry and all things nerdy. Her comics can be seen at her website Kate or Die!. A few months ago, comic website Comics Alliance brought her on to make exclusive Kate or Die comics for them that are on the topic of comics and comic fandom. If you’re a part of comic circles, a lot of these scenarios will seem awfully familiar to you.

Early on, Leth takes on the harassment that many female cosplayers face when they go to comic conventions in costume. She shows that no matter what women are dressed as, whether it’s a school girl superhero or the protagonist of a video game, they face harassment and exclusion. The comic starts with her giving tips on how to deal with creepers who mess with you. However, the best part comes at the end when she flips the script and reveals that it shouldn’t be up to the cosplayer to deal with creepers, it should be up to creepers to stop creeping. 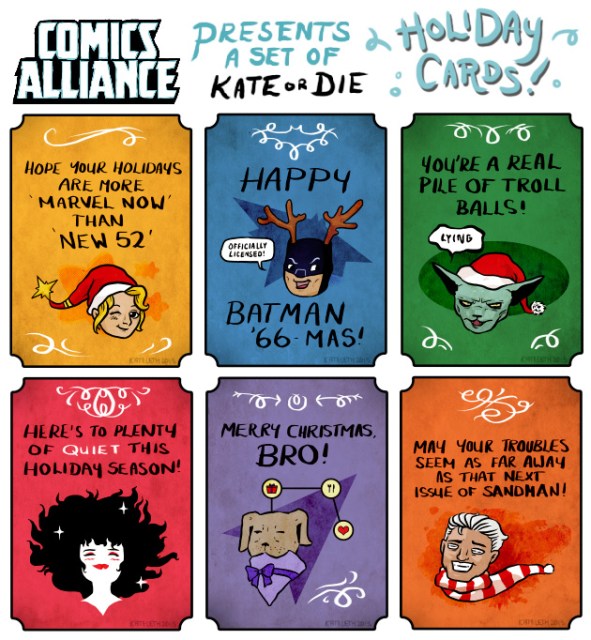 When the holiday season came along, Leth made posts to match. Her comic Christmas cards are spot on and 100% perfect. I love them all, but my favorites have to be the ones inspired by Saga and Matt Fraction and David Aja’s Hawkeye. Also, the one taking a dig at DC Comic’s New 52 relaunch made me laugh out loud and then get immediately sad at the sad state of affairs over at DC right now. Then, for New Years, instead of making the obvious joke and being totally negative about all the bad things that could happen and all the resolutions that are likely to be broken, she decided to look forward to the new year and be optimistic.

It’s great how she’s able to take issues within the comic book community and use them to address wider issues. When the issue of sexual harassment between comic creators recently came up, Leth was able to make a comic addressing not only the specific instance of a male creator harassing a female creator, but also addressing the entire culture of doubting and discrediting women when they come forward with accusations of sexual harassment (or worse things). 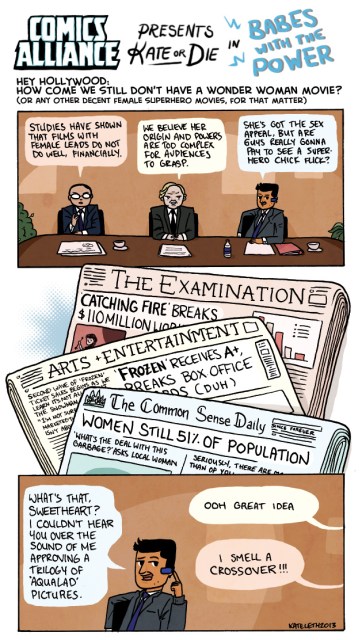 One of my favorite things about Leth is the passionate way she stands up for women who read and love comics. She even has an online group, The Valkyries, dedicated to women and girls who work at comic shops. Almost all of these comics touch on issues of sexism in the comics industry. And that’s a sad thing. It’s not that Leth is going out of her way to find issues to talk about, they keep on presenting themselves every week. Whether it’s talking about creepers at comic conventions, sexual harassment or Warner Brother’s refusing to make a Wonder Woman movie because “movies with female leads don’t sell” in a time when Frozen and Catching Fire are shattering box office records. Another comic brings up one of my pet peeves: the fact that even though many, many women (including me) buy geeky attire and comic-based shirts and other clothes, it’s almost impossible to find those clothes in a variety of sizes.

Like all of Leth’s Kate or Die comics, the art is wonderful and fun. The characters have large eyes, simple mouths and they are extremely emotive. Her cartoony style makes the comics eminently easy to read and even enticing. They draw you in so well that you immediately want to read everything else that she’s written. They also have an iconic feeling to them, as in when you see them, you immediately know that it’s her and nobody else. This is her style and hers alone. 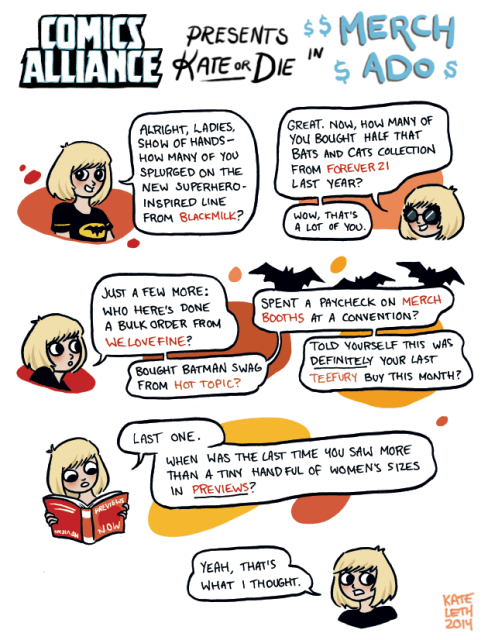 Kate Leth is a comic creator and comic shop worker from Halifax, Nova Scotia. Apart from appearing on Comics Alliance, her own website and in Adventure Time, Bravest Warriors, and Womanthology comics, she also has a tumblr that I would recommend checking out. If you’re interested in buying shirts or bags with her art, including a bunch of great products about how comics, and all books, are for girls, you can check out her Topatoco store. To purchase her art, you can check out her etsy store.