The second to last time I wore a maxi skirt, I was deeply aware of the way it flipped around my ankles on my way from the bus stop to the office, from my desk to the water cooler, from my house to the pulperia on the corner where they were out of laundry detergent anyway. When I took it off that night, I promised myself I would never wear it again.

And then a few weeks later I did, because I was tired and thought that feeling was a fluke and decided I was just taking the queer theory I had been reading too personally, because gender expression was something I played with on weekends, but in my day to day I was perfectly content to wear whatever.

My most modest, feminine clothes used to make me feel acceptable and appropriate at my conservative workplace, providing an easy cover for a personal life I never talked about. They made me safe and invisible on the bus ride to work and while I argued over fruit prices at the market. I get street harassed a few dozen times a day no matter what I wear, but in the long skirts, the cropped khaki pants, it was the idle shrieking of men and boys who saw nothing but the swoosh of fabric, the curve of my waist. Their endless grunts of “princesita linda” (pretty little princess) and “adios chelita, I love you!” had nothing to do with me as a person; they were just a tax I paid to walk down the street, like every woman I know everywhere in the world. 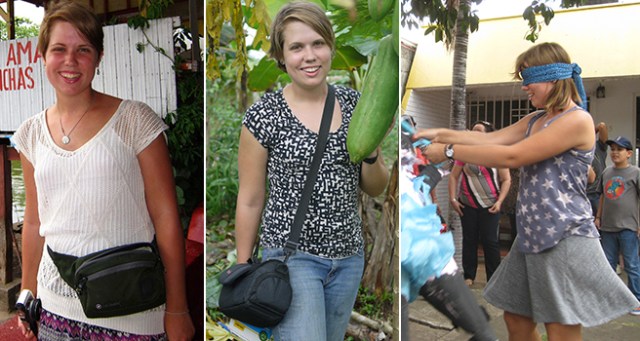 Me trying to fit in -or – The road to hell is paved with off-trend fanny packs -or – Papaya is slang for vagina.

But the last time I wore that maxi skirt, I carried tightness behind my sternum all day long that made it ever so slightly harder to breathe. When I took the damn thing off, I knew I had to keep my promise.

I moved to Nicaragua in 2013 to help manage English communications and fundraising for a local rural development nonprofit. I was newly out as bi and clueless about queerness. I got on the plane to Managua and assumed I was flying back into the closet. Armed with decent Spanish, a suitcase full of knee-length skirts and t-shirts that ruffled at the neck, and my pixie cut already halfway grown out, I was ready to be a good gringa. I wanted to blend in, tell meaningful stories and contribute in my small way to the dismantling of U.S. imperialism’s brutal impact on this country. I thought I had to dress the part, and I didn’t see how queerness and gender fuckery could be part of that. Over time, I got more conscious of queer identities and histories and found spaces online and in Managua where others wanted to celebrate my queer self with me and deconstruct heteropatriarchy and machismo. The clothes I brought with me began to feel like a disguise, a futile attempt to buffer the outside judgment of me as a white foreigner, woman and queer human that came rushing down like los aguas de mayo, the May rains.

I recently moved into a bedroom with no closet. In two years here, this is my fourth room. The first two didn’t have closets either, but the last place, where I lived for 14 months, had an amazing closet that contributed heavily to my decision to live there. It had deep shelves and big doors, and I kept almost everything I owned in it. In my new house, I have a yard-wide hanging rack and five small plastic drawers.

When I faced my massive closet preparing to downsize, I breathed deeply and did the thing. I pulled out skirt after skirt, dress after frilly top, and piled them in a corner. It was more like breaking off a cast than ripping off a Band Aid. In a mound of gauze and drape, I buried the certain kind of girl I could no longer relate to. I took just a moment to grieve her and honor the choice of that moment to give up on the heteronormative, easily digested femininity I had tried to project for two years. 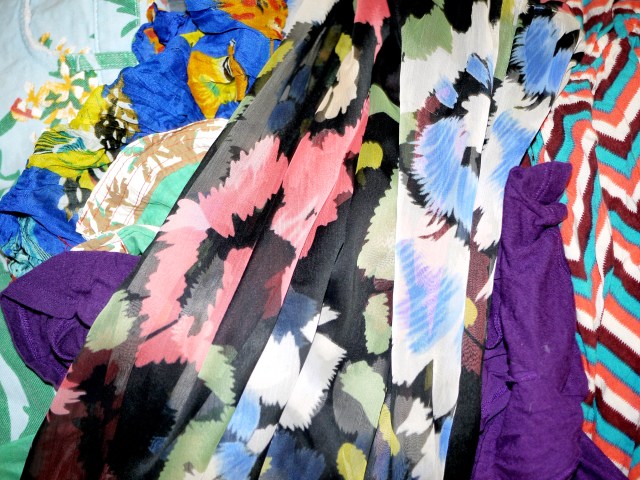 The day we moved, my friend’s family had a yard sale, and I offloaded the bulging trash bag of discarded clothes onto them. Managua is a sprawling city with more than a million residents, but a girl I dated calls it a pañuelo, a hankie, which makes no sense literally but means everyone knows everyone and there are few secrets. I’ll probably see my clothes on a stranger at the bus stop some day and hope she loves them.

After this purge, my makeshift closet makes a lot more sense to me. There is still a lot of femme there — I kept my favorite hot pink mini skirt, the black slip dress with the birds, the cheetah print cropped tank. A good 80 percent of my clothes were made for humans with bodies shaped like mine. But the waists, on average, are straighter; the necklines are higher. I wear more sports bras under more button downs and bring out my men’s shirts for the parties I care about most. And the thing is, almost nothing has changed about my external life. I still get catcalled regularly – I can see these men clocking my gender from half a block away, and they holler the second they spot the line of my ass under my unisex tee. No one at work ever questions my sartorial choices or my femininity. As a white foreigner, I have a lot of privilege that keeps me safe, because I’m already so strange that no one questions the details. When I ride the 119 to work, people stare because they don’t see many gringxs on the bus, not because my shirt is buttoned all the way up. 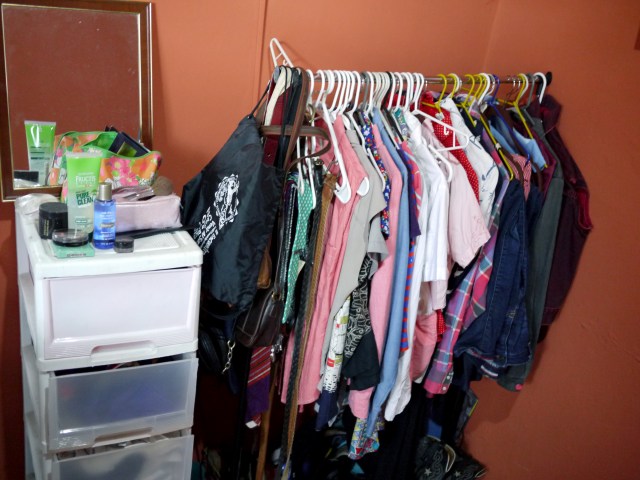 Another factor is that in Nicaragua there is practically no conception of a non-binary gender experience or presentation and very little public awareness of women’s same-sex attraction. The queer and otherwise radically non-heterosexual discourses happening in Spain, Mexico and Argentina haven’t permeated most of Central America. I have never met a Nicaraguan who uses gender-neutral pronouns, and I’ve never heard them used in any space here (though I did encounter and relish them in Costa Rica). The queer and lesbian circles here are vibrant and brilliant, but also small and a bit insular. I know a few self-identified maricas, marimachas, cochones and cochonas (basically fags and dykes, though context is harder to translate), and they too can typically traverse the streets under the invisibility cloak provided by other people’s ignorance.

In this way, Nicaragua is a lonely place to be unpacking my gender presentation and trying to figure out how my bones fit together. My shift away from traditional feminine presentation is happening in a context that has no framework to notice it, let alone critique it. But when my dyke friend pulls on the hem of my scissoring tank and winks knowingly, when I’m wearing a button down covered in drawings of naked surfing ladies at the salsa bar and my gay friend whispers that I look majestically queer, I know they see what the catcallers and coworkers miss, and suddenly I feel solid. 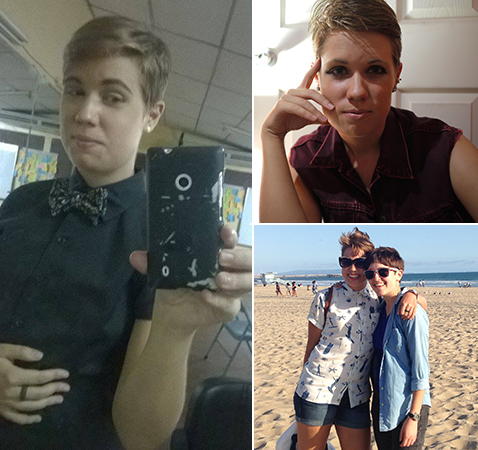 Living my best life involves a lot of collars, denim and neckwear.

No one else had any reason to notice the dramatic change to my wardrobe, since what I was actually wearing shifted so gradually. But there is a lot of freedom in not having all those skirts lined up to remind me of the ways I have failed to experience a womanhood that makes sense to other people. I no longer have the option to talk myself into choosing a day full of self-consciousness and dysphoria because those clothing options simply aren’t there. Critics often write off those of us invested in gender performance as personal identity-obsessed navel gazers who are too busy fixing our hair to deconstruct violent systems of power. But listen: We can’t fight if we’re collapsing under our own weight. And listen: When I’m wearing my favorite tie and I see a little boy in a skirt and we give each other the nod, that’s the revolution.

Soon, startlingly soon, I will move back to Texas as a more radical, free and alive version of the gal that hopped on a plane right after graduation. It will be a struggle to learn how to thrive in the place that is most home, where rejection and homo-, queer-, and biphobia feels most personal. My LGBT work in Nicaragua has been in response to and in solidarity with what Nicas are already doing, because they must set the agenda for their own movements. But when I go home to post-marriage equality ruling Texas, I will be wading boots first into a culture war over whether I am as Texan as my straight neighbors.

Before you go! It takes funding to keep this publication by and for queer women and trans people of all genders running every day. And A+ members keep the majority of our site free for everyone. Still, 99.9% of our readers are not members. A+ membership starts at just $4/month. If you're able to, will you join A+ and keep Autostraddle here and working for everyone?
Join A+
Related:androgynous fashionjourney to the centerMiniseriespersonal essay