Editor’s note: Quotes have been translated from Spanish by the author.

Revolution brews in the moments of recognition — of self, of others, of community — that occur in LGBTI spaces in Latin America. Last weekend, 200 lesbians, bisexuals, trans women and other trans people, intersex people and gay men descended upon San José, Costa Rica for the 2nd Encuentro LesBiTransInter-Feminista Venir Al Sur to learn, play and create a space where they could see each other profoundly.

That community building is vital for the many LGBTI latinxs who don’t have much access to it in their daily lives. As Nicaraguan musician and activist Gaby Baca put it: “It’s important to be able to come together and realize you’re not the only one in the barrio.”

During the encounter, the barrio got pretty big. Folks came from Mexico, Argentina and everywhere in between, as well as Spain, for three days of workshops, cultural presentations and a raucous and beautiful closing march. We made sex toys from recyclable materials; examined themes like the body and pleasure, diverse feminisms and horizontal activist structures; practiced self-defense; and drank not a small number of $2 beers. 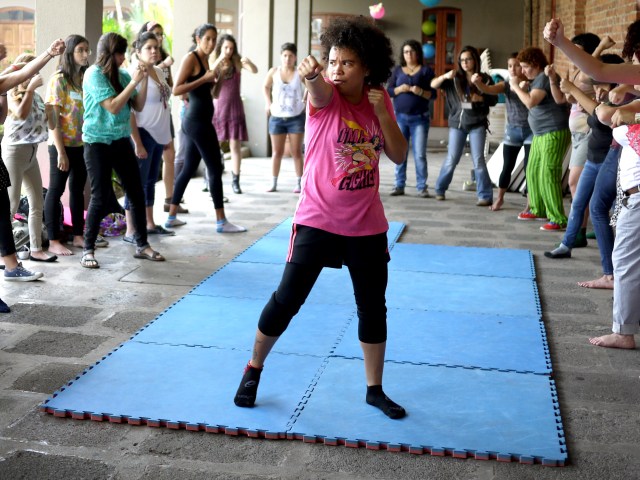 The first Venir Al Sur was in 2012 in Paraguay, and very few Central Americans could attend, which was part of the motivation for holding the second iteration in Costa Rica. At some points, organizers feared the event wouldn’t be possible. Though Costa Rica is one of the most progressive and LGBTI-friendly countries in Central America, anti-gay sentiments are present at all levels of life. They struggled to find a space to host them in the capital and eventually had to call on personal contacts to secure space at the Culture Ministry.

“Even then, we couldn’t be explicit about what kind of workshops we would be hosting,” said organizer Paulina Torres. “But, every conversation with an official was a chance for illumination. We definitely had to push the system.”

Grants and donations from Central American and international organizations covered almost all costs for the participants, which was crucial and ensured that financial capacity wouldn’t block anyone from the event who had something to gain from it.

Stories of systemic exclusion and discrimination abounded — and so did the stories of powerful women disrupting those systems to create survival structures that ripple out into their communities. For example, trans women from around Central America shared the realities they face in their countries in an educational and emotional workshop.  In Guatemala, 80% of trans women engage in sex work, most of them because they are blacklisted from other types of jobs and lack any form of state protection. In El Salvador, a trans woman is killed by gangs every two days. In Nicaragua, statistics indicate that 18 to 28% of trans women live with HIV. There is some local and international funding to combat HIV, but not to address any of the other challenges trans women face. Women have organized themselves to confront this grim reality and fight against oppressive political, social and economic structures. In most cities, the division between trans and lesbian activists is stark.

“There are 200 women at this conference, and we are thankful,” said Stacy Velasquez Vasquez, who works with Guatemalan trans advocacy group Reinas de la Noche. “But all those who stayed home continue to stigmatize us as women with penises. [Trans women] must stop being afraid, because fear is a form of violence. If we replace fear with knowledge, we can become safer.” 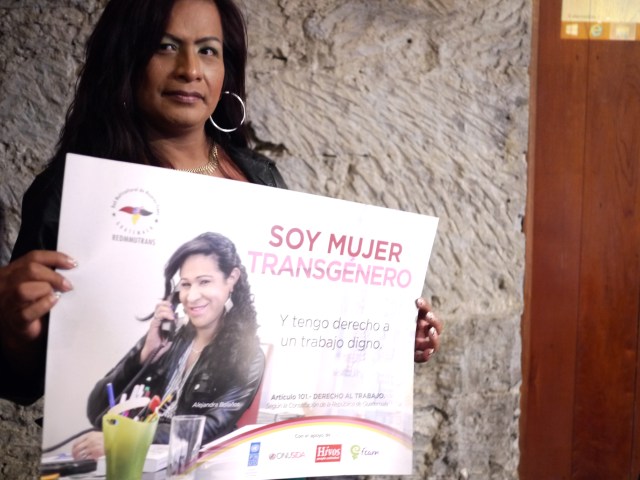 Different organizations shared they materials they have created in their countries to speak out in favor of trans rights. This poster demands the right to employment opportunities for trans women.

Venir Al Sur was created from a trans-inclusive stance, and transfeminism is a key part of the organization’s politics, said activist Rosa Posa, one of the leaders of the Paraguay Venir Al Sur. Organizers said they believe Venir Al Sur is the first Latin America-wide LGBTI conference that deliberately includes trans women and transfeminism. Certainly, it was the first time most of the trans women participants felt truly welcome in such a space. And it was the first time I and many participants heard speakers use fully gender-inclusive language, like “todes” (everyone, gender-inclusive) instead of “todos y todas” (men and women).

“When I return to El Salvador, I have to survive, and part of my survival will be sharing what I have learned here with my fellow trans women,” said El Salvadorian trans activist Amalia Leiva. “It’s not enough to come here to be activists together and then go home with nothing but un chorro de babas” — a stream of spit.

Latin American feminism emphasizes collectivism, populism and anti-capitalism. It is pro-choice, anti-war and largely secular — though many feminists still identify with their Christian upbringing. It is pushing itself towards anti-racism and trans-inclusion. But, at a conference with 200 people, there were 200 variations on what feminism can be and how it can be mobilized around Latin America.  Such a diverse group required many entry points to formulate new practices of liberation. Each day featured numerous cultural presentations, like a group of Colombian cis men and trans women who performed traditional folkloric dance in majestic rainbow skirts, the irreverent lesbian Mexican cabaret group Las Reinas Chulas and a sexy, challenging theater performance by the feminist collective La Tule, based in Costa Rica. 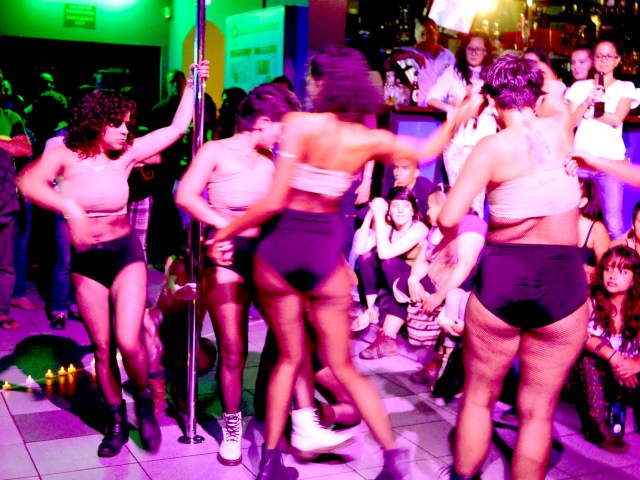 And then, after all of that, we marched. I’ve been to feminist and pride marches in Nicaragua, and when we’re not being detained by police, they are raucous, joyful affairs dedicated to increasing visibility and community. But there was something about this one that bubbled up to another plane. From more than a dozen countries, we screamed for an end to racism, capitalism and machismo. We demanded the right for trans people to change their names legally, for access to abortion, for the liberation of the orgasm. Women and men took turns leading chants, and we made ourselves known in front of the general public and a whole squad of firefighters. In front of the Mexican Embassy, we wore out our throats counting to 43 to demand justice for the students massacred from the Ayotzinapa college in Mexico. We detained buses, danced, beat drums and loved each other in the streets of San José. 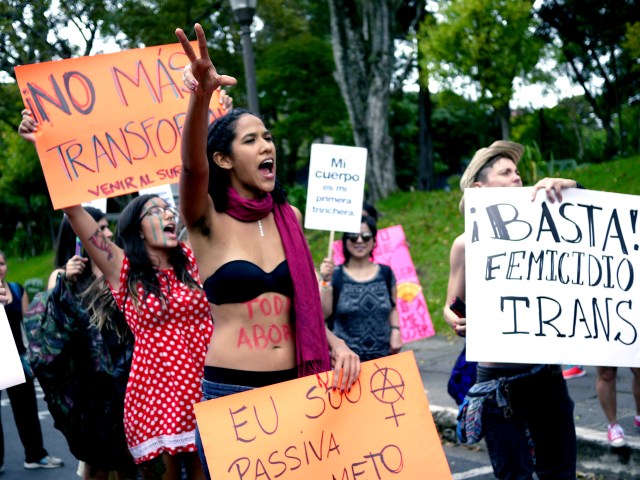 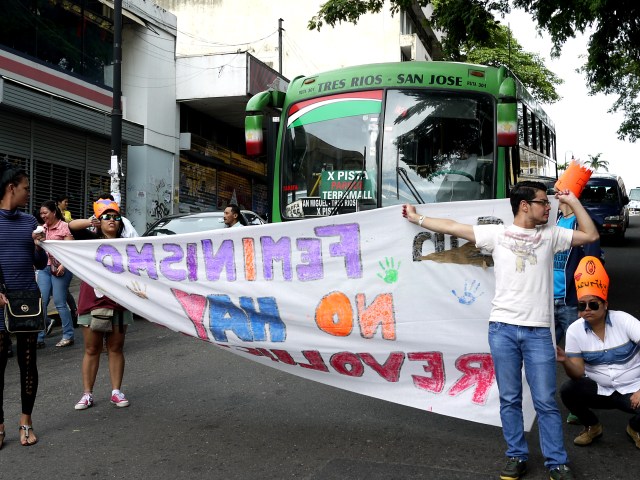 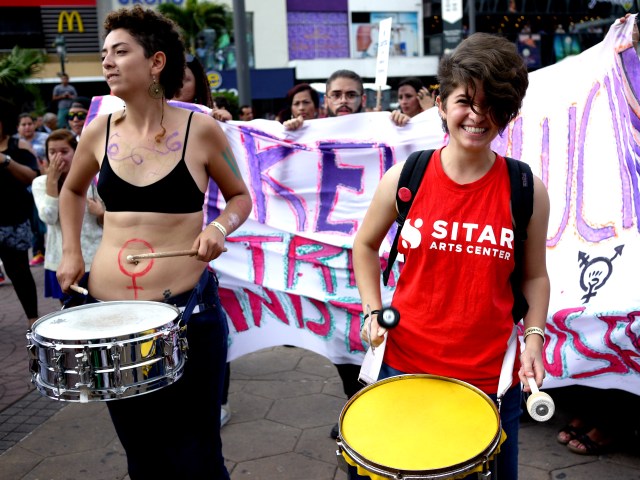 After a transformative weekend, we scattered on buses and planes back to our respective countries to see how we can implement the changes that will help make all of Latin America safe and vibrant for every body. As a gringa with politics that both do and don’t apply in a Latin American context, I am necessarily more of an observer than anything in these spaces, and I’m deeply grateful for the way that Latin American LGBTI feminism has transformed, contextualized and radicalized my queer feminism. At the encounter, I learned new and critical ways to stand in solidarity with my LGBTI siblings on these continents and watched friends new and old find tools to work harder in their own fights. If you’ve been to A-Camp, you know how hard it is to leave spaces like these and return to a world where every face is not turned toward us in love and solidarity. But, 200 compañerxs are off to their homes, jobs and streets with new tools and support. And Venir Al Sur is already preparing for its next encounter, planned for 2017 in Mexico.

“Dialoguing the themes that we care about and interchanging experiences, this is the essence of ‘encounter,'” Torres said. “But we want to be more people, many more, who are making ruptures in our countries, putting our bodies at the front so they see us, dialoguing so we  become stronger. This means we have to find ways to come together and support each other to make it to Mexico, and to keep having encounters in every country until every one of our bodies is free of discrimination.”