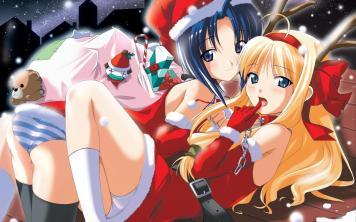 HELLO it is Christmas weekend, the one time at which my guilt for referencing Christmas explicitly instead of ‘the holidays’ or ‘winter’ or ‘Saturday’ is slightly mitigated. And true to everything that we hope and wish for at this magical or at least candy-filled time of year; there is good news in the world today! Joe Biden wants you to get gay married. Ok, so that’s not exactly what he said. What he said on Good Morning America on Friday was:

“…I think there’s an inevitability for a national consensus on gay marriage. That is my view. But this is the president’s policy, but it is evolving. I think the country’s evolving.”

I think this is something we actually all kind of know, and also where has Joe Biden been? I honestly forgot we had a Vice President. In all seriousness, though, it really does seem like a sign of the times to have the Vice President of the United States say on Good Morning America that he doesn’t even think there’s a question whether gay marriage will be legalized. It’s like the sociopolitical equivalent of your grandma knocking on her neighbor’s door to ask if she can borrow some paint to finish her FUCK THE POLICE protest sign. Like, it’s not necessarily concrete change, but still kind of badass, no?

In other, more awww-inducing news, WHAT IF SANTA WAS REAL AND WAS A GAY COUPLE? I KNOW RIGHT? Here’s the deal:

A New York couple didn’t know what to do when hundreds of hand-written letters addressed to Santa Claus started arriving in their letterbox. The bewildered duo decided to try their best to become Saint Nicholas for as many present-seeking kids as possible.“When I saw the first letter arrive addressed to Santa Claus, I thought, well that’s weird. Then ten more came… 20 more… 50 more… I thought ‘well, there’s something going on here’,” explains Jim.

Intriguing, yes? Good thing the New York Times has a video about it!

Also, have you shared your own personal Christmas miracles in our still-going-on Christmas open thread? It’s also okay if your Christmas miracle is in fact the opposite of a Christmas miracle, it turns out that literally every single lesbian on earth has a racist/sexist/homophobic uncle/grandma/mom/entire family, what are the chances?

Alan Turing more or less won WWII for the Allies by inventing computer science and encryption/decryption; he was also prosecuted by the British government and later committed suicide because he was gay. There’s nothing we can do to change that now, but the British government is doing the next best thing: working to erase the convictions of historic “gay sex offenders.” Gay sex wasn’t decriminalized until 1967 (!!!), so for some it’s still a factor in their employment status and criminal record, but hopefully it soon won’t be. David Cameron was quoted as saying, “We will change the law so that any past convictions for consensual homosexual sexual activities, which have since become lawful, will be treated as spent, and will not be disclosed on a criminal record check when applying for a job. This is a question of justice – and it’s right that we should change the law and wipe the slate clean.”

As of January 1st 2011, civil partnerships will be legal in Ireland! Although actual unions won’t take place for a while because couples need to give three months notice to the registrar, it’s still great news!

Lady Gaga was going to give you a Christmas present but I think it got rescheduled to be a New Year’s present. Also I think it’s an image from/for Born This Way. Are you excited? I’m excited. Gaga’s excited. 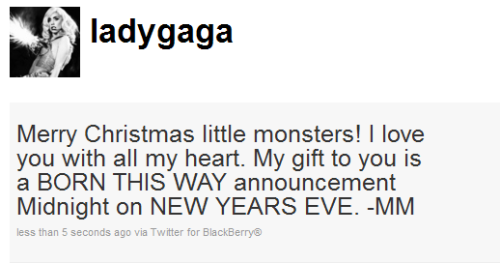 In other news, Gaga also went Christmas shopping. According to ONTD, she went in THE MOST AMAZING CAR EVER!!! and also the pants she wore were SUPER COOL!!!

It’s not really related, but I thought this thing called “All I Want For Christmas: Lindsay Lohan Clean, Sober, and Boobtastic” was kind of funny. It’s nice when someone knows what they want. “Bring her to my home on Christmas morning and I’ll personally see to her bathing, dressing, and binding to the bed until such time as she’s rid of her demons. Seriously, I’ve already purchased the medically recommended sexy silk lace ties for the bedposts. Count on me, St. Nick.”

Also unrelated, also funny, this bizarre article about an imaginary world without men is completely horrifying but also in a way hilarious? Like, maybe don’t read it if you just had to sit through a Christmas dinner tirade about how the bra-burning black immigrant gay Jews are stealing American freedomjobs, but if you didn’t, then feel free to pour yourself another glass of eggnog and enjoy. “How will the female gender continue to perpetuate itself on earth or are the women supposed to go into extinction too? Perhaps the science of cloning would come in very useful in this regard. Of course with the magic which cloning can do, a woman certainly does not need to engage in a time-wasting effort to get the attention of the newest honcho on your street… 90 per cent of the stress women experience can be traced to men. For instance, women would not have to undergo surgery for breast enhancement, facelift, hip reduction, tummy tuck or vagina reconstruction.”

Tired of hanging out with your grandma? HOW ABOUT JAMES FRANCO’S. YOU’RE WELCOME.

Christmas Greetings From the Franco’s from James Franco

Johnny Weir has a single. Discuss.