Trigger warning: Contains reference to rape and video has graphic description and depiction of rape.

Jennifer Beals! There. I have your attention. There’s a new YouTube channel called WIGS (Where It Gets Interesting — doesn’t that almost sound like Degrassi’s “It Goes There”?!) with short films, documentaries, and web series starring female leads.

The newest series is called Lauren and stars Bette Porter and Troian Bellisario (also known as Spencer from Pretty Little Liars). Lauren examines the sometimes upsetting consequences of when women in the army report sexual assault or harassment against them from members of their own platoons. Bellisario stars as Lauren, a soldier who has been raped by three of her fellow soldiers and is reporting the incident to Major Jo Stone, played by Jennifer Beals. 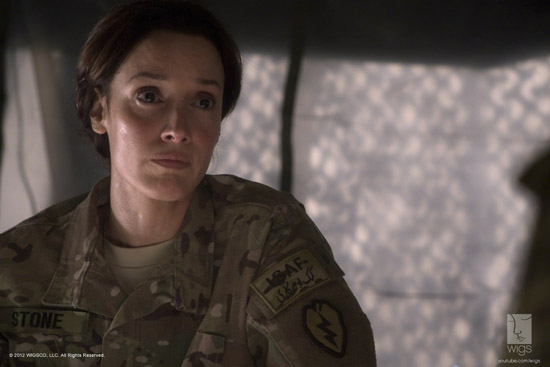 On a lighter note, when AfterEllen interviewed Beals about the role and what her lesbian audience would think, she replied, “Gosh, I don’t know what the lesbian fans will like best about the series, maybe my uniform? And I say that lovingly because I have to say, my lesbian fans are the most loyal that I have ever encountered and I’m very grateful to all of them.”

She does look damn good in that uniform, just sayin’.

Let me warn you: this is not a happy short film, and in fact, I cried twice in eleven minutes. It’s heavy. It’s incredibly triggering. However, it is amazingly acted, tastefully depicted, and understandably horrific. This is real and this happens. The end of the film has upsetting statistics about rape in the military (3,192 sexual assaults in the military were reported in 2011, and many go unreported every year) as well as a link to where you can find more information on the Service Women’s Action Network website.

Here’s part one of three. Let me know what you think.