I’m just going to say it, and hope that I don’t sound ridiculous, but I don’t really know who Janelle Monáe is for Halloween. I know that it’s Diva Plavalaguna, and that this person (alien?) is from The Fifth Element. And I know that The Fifth Element is beloved by many queerdos across the internets, and I am legitimately so happy for all of y’all. I am sure that if you are in the know this costume is epic. I’m sure of it because Janelle Monáe + Halloween almost always is, remember when they were The Grinch? Or her own Dr. Jekyll to her own My. Hyde? Really this is a story about a party that they went to with Megan thee Stallion over the weekend that involved at least one on-camera (cheek) kiss, according to Meg’s IG stories.

Still, let’s start with Janelle Monáe’s patently gorgeous costume as Diva Plavalaguna that makes no sense to me — completely my fault, I’m failing you as a narrator. Here you go:

It also involves some kind of singing situation?

Ok, so! That out of the way, I think Megan thee Stallion’s Halloween costume las weekend was “I’m hot” + “a little fake blood.” And I am not judging, if I was as hot as Meg, that would be my costume, too. Plus, it’s well-documented that Meg loves Halloween. So much so that she hosted a Halloween party this weekend dubbed “Hottieween” (I love her). And that officially brings us to our little story. At Hottieween this weekend, full of many celebs and the influencers who love them, a seemingly drunk fun time was had by all. Many an ass was thrown. Many a tongue stuck out in glee. And I was a half asleep scrolling through my Instagram stories, for I am neither a celebrity nor an influencer so my ass was thrown at home in my pajamas, my tongue was only stuck out while I brushed my teeth, I could not help but stop and replay… because.. did I see?? Was it??

Of course, like all things Halloween, the pumpkin disappeared as the clock on the IG stories ran out. But I was able to find a copy. The internet never forgets.

And yes, I took a screenshot, so you don’t have to: 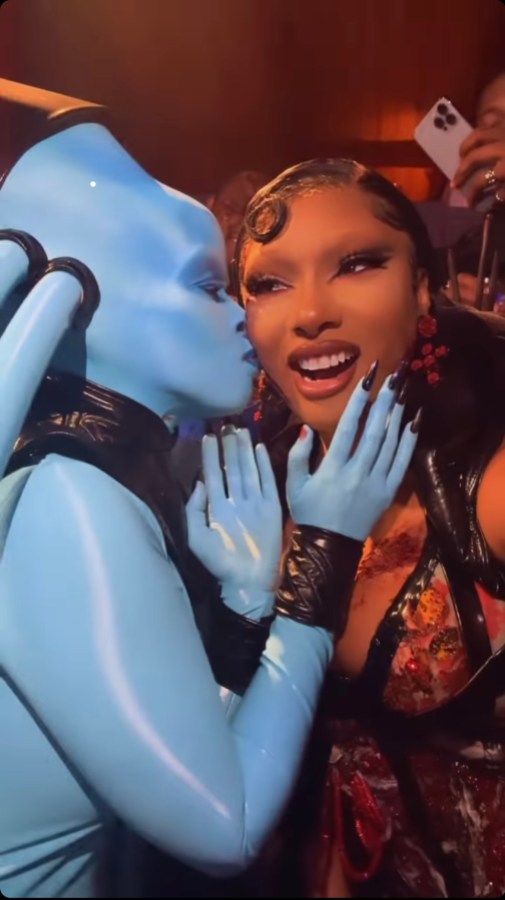 My favorite part is Meg — of “it’s giving top, you know that” fame — almost blushes? It’s so cute??

I hope when the party was over, they also engaged in the gay friendship tradition of drunk eating waffles (is this just my friends?) while sitting in each other’s laps and playing six-degrees-of-separation on each other’s hookups (Janelle’s gonna win, she’s got Tessa Thompson and potentially Lupita Nyong’o. Remember what I said? The internet never forgets). And now, here’s some other cute queers in costumes!

A Brief Round Up of Some Other Hot Queer Celebrities in Costumes, Trick-or-Treat

Because Gay Christmas is forever.

I wanted to say more about this, but I blacked out.

Kristen Stewart and Dylan Meyer, as Wayne and Garth

This is such a casual win.

Niecy Nash and Jessica Betts, as Rihanna and ASAP Rocky from the 2021 Met Ball

Is this just an excuse for me to post about when they went as Nelly and Kelly Rowland from the 2002 “Dilemma” video? Yes, yes it is.

Chrishell Stause and G Flip, as Each Other

It’s maybe almost too gay? We covered it for you.

So Keke looks great, never a question. I’m just not sure if I love this new trend where Halloween is basically audition reels for celebrities? That said, they don’t call her “keep a bag” Palmer for nothin.

Hayley Kiyoko and Becca Tilley, as Velma and Daphne

This is a starter list, something for your Monday afternoons because Autostraddle loves you. We’ll be back soon with our weekly celesbian Instagram round up No Filter and your host Christina Tucker will guide you through the exhaustive highlights with even more jokes, because what are we if not humans passing time on this earth?

And on that note, Happy Halloween! Kiss the girls you want to kiss, just make sure to get their permission first! XO