The Oscars are this weekend, and the Best Picture category is shockingly low on lesbian content, which is, of course, sarcasm because the Best Picture category is always low on lesbian content and no I will not stop talking about Carol’s Oscar snub! Dee Rees and Rachel Morrison are the only out lesbians nominated for awards, both for their work on Mudbound.

But I am here to tell you about a little lesbian love story that snuck its way into the nominations. Revolting Rhymes is an Oscar-nominated animated short based on the Roald Dahl book of the same name. It’s a dark and funny spin on interwoven fairy tales. It’s also secretly a dark rom com about young Little Red Riding Hood and Snow White falling in love. 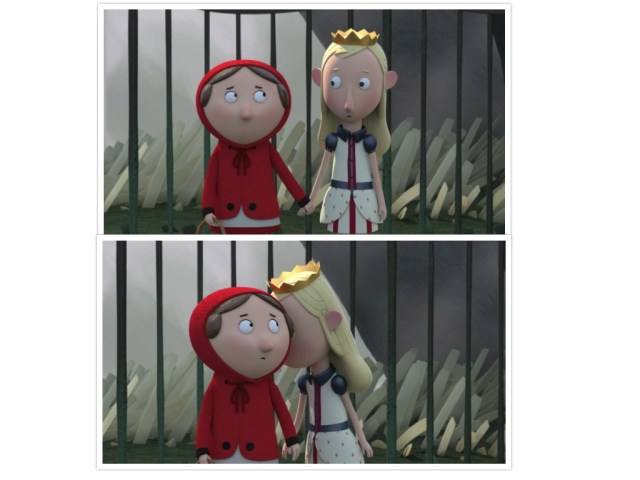 The subtext is so discernible that I’d have a hard time believing it’s unintentional. Little Red and Snow White meet, as any great rom com couple does, under less-than-ideal circumstances. Snow White’s mother has just died, and Little Red is barely scraping by on the money she makes from selling flowers to village people. Little Red and Snow White form an intense friendship, leaning on each other to get by during some of the darkest days in their lives. They pick flowers together, hold hands, are gentle with one another. It’s a very lovely juxtaposition to all of the darkness in the story, and it’s clear right away that their bond is for life. 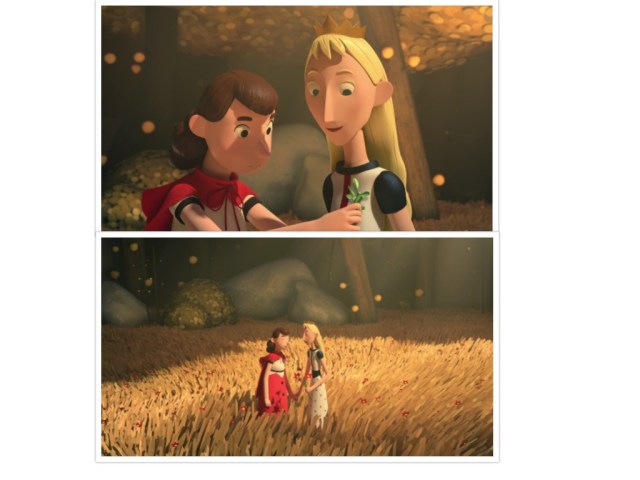 just a friendship hang in a field of flowers

Violence and misfortune separate the young women. Snow White moves to the city and starts wearing a striped Lesbian Mockneck, which is most definitely a thing. Little Red Riding Hood has to kill two wolves and revamp her wardrobe before she can be reunited with her long lost love. She eventually moves to the city to be with Snow White and they do that thing where they touch their heads together while closing eyes??? The chemistry and romance is baked into the animation, the physicality between the characters teetering just ever so tenderly into the More Than Friends zone. 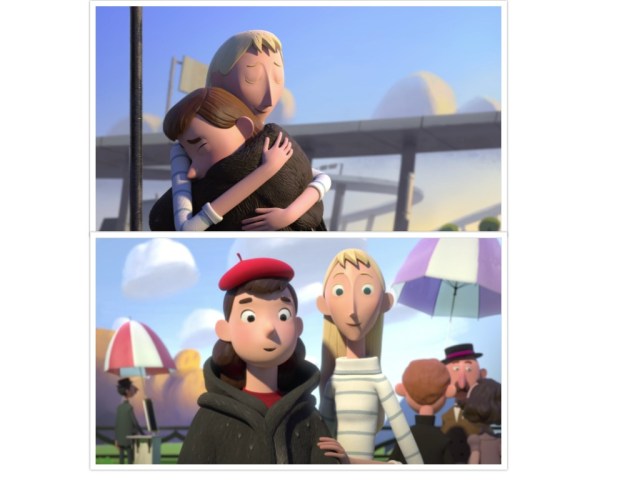 Now, I’m mostly joking when I say that Revolting Rhymes has the best lesbian rep of any Oscar-nominated movie, especially since the love story remains just below the surface of the short and never quite breaks through. Sadly, there’s no grand kiss during their reunion. But it really is a fun short with a warm relationship between two women at its center that’ll make your heart flutter even if they’re just supposed to be fairytale “friends.” Unfortunately—given that Thelma got shut out of the Foreign Film category, Battles Of The Sexes out of the Best Picture category, and BPM out of the documentary category—subtext is really all we’ve got in terms of seeing lesbians’ stories unfold on screen in Oscar-nominated movies.

So watch Revolting Rhymes on Netflix right now. And don’t forget to root for Carol (2015) at the 2018 Oscars on Sunday.