Leading into today’s Oscars announcements, Carol had been nominated for Best Film by basically every association of film critics on the entire planet earth. In fact, it has a standalone Wikipedia page dedicated solely to the 200 accolades it has received so far. This morning, the Academy of Motion Picture Arts and Sciences nominated Carol for awards in many categories — Best Actress and Best Supporting Actress, among them — but skipped right over it when it came to Best Picture. It’s an even more bizarre snub when you consider that the Best Picture category can now include ten films, but only eight were chosen. The internet has been all a dither trying to figure out what the heck happened, with many entertainment magazines, including Vanity Fair, deciding that ultimately Carol was just too gay.

Wait, though: Wasn’t The Kids Are All Right gay when it was nominated for Best Picture in 2010? Or Milk in 2008? Or Brokeback Mountain in 2005? Yes, the Academy has proven repeatedly that it has no problem with gay films. What the Academy — with its 76% male voter population* — has is a problem with films that do not center on male experience. Even The Kids Are All Right, while technically a film about lesbians, focused its story on a pair of moms rebuilding their family around a man to keep it together, with one of them even having sex with him. And while Carol is a lesbian love story and a queer coming of age story most of all, the second layer of its narrative is a complete dismissal of bumbling, fumbling, entitled men who cannot wrap their minds around women who have no need for them whatsoever.

(*It should come as no surprise that 94% of Oscar voters are also white, which led once again this year to a list of all-white acting nominees.) 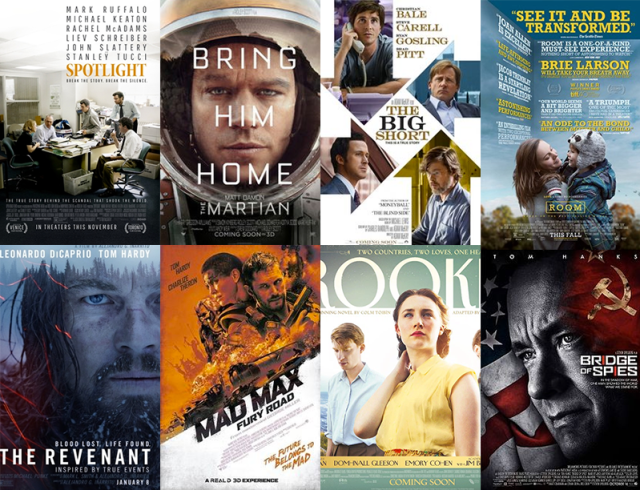 Consider this year’s batch of Best Picture nominees. The overwhelming majority of them star one male A-lister or an ensemble of male A-listers (with the occasional token female). Even Mad Max: Fury Road — which is hands down the most feminist, patriarchy-walloping action film ever made — relies heavily on the character of Max in the promotion of the movie. And despite the fact that Furiosa is the real hero of the film, Max is always there, in the background, on the roof, under the car, in the dirt, grunting and smashing and whacking and yelling and reminding everyone that a man is present, that a man is necessary. (And, in fact, he’s right: Mad Max would never have reached pre-production without a big strong man as the title character.)

Carol‘s director, Todd Haynes, who was also snubbed by the Academy for the first time this awards season, refused to center on masculine experience (he cut a scene where Therese gave Richard a hand job, for example, deciding to eschew all male pleasure on-screen). He also made the bold decision to allow Carol‘s audience to laugh at men. Not with men. No, Haynes invited viewers to see the men in his movie — these husbands and boyfriends and duplicitous know-it-all notions sellers — through the eyes of queer women and to laugh openly at their silliness, unearned confidence, and expendability. In 1952!

Carol’s husband, Harge, tries everything he can to control her. He isolates her from her friends, tries to emotionally and physically intimidate her, blackmails her with custody of their daughter, and even hires a private investigator to follow her and Therese and collect incriminating evidence about their affair. When he tries to coerce Carol into spending Christmas with him, he says he doesn’t want her to be alone, but Carol points out that she has a best friend/former lover, Abby, with whom she can enjoy her holidays. She truly does not need him. Carol knocks him to the ground when he’s groping her in a drunken stupor, Abby slams the door in his face when he shows up in the middle of the night to bully her, and the most triumphant moment of the film comes when Carol walks out on him (and a roomful of male lawyers) after declaring that she will not live against her grain. He is the embodiment of toxic masculinity and she shrugs him off like her fur coat. 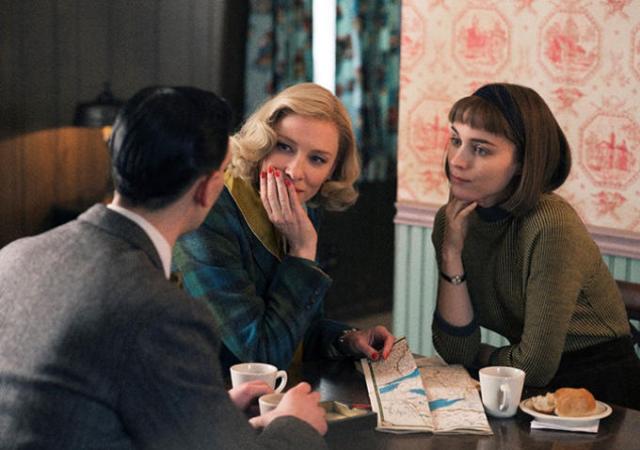 Oh, do tell us more about what Proust really meant.

Similarly, Therese’s boyfriend, Richard, needles and begs for her attention, tries repeatedly to get her to agree to travel to Europe with him, and yells out an unrequited “I love you!” as Therese shuts the door and drives away in Carol’s car. He’s furious when he finally realizes Therese doesn’t return his affections, not because he thinks there’s anything particularly special about her (he can’t even tell her why he loves her), but because he believes he has earned her as his wife. He bought boat tickets! He got a better job! She owes herself to him!

Haynes’ vision of the men in Carol and Therese’s world is displayed most clearly in a second act scene when they share coffee with an intrusive notions salesman named Tommy Tucker. He invites himself to sit with Therese over breakfast, and Carol barely acknowledges his presence, pulling up a chair without introducing herself and never once turning her body in his direction. Oh, she’s happy to give him a scornful side-eye when he suggests they buy a sewing kit, and giddy to mock him when he butts in to pontificate about a better route to Chicago than the one they’re planning, and perfectly content to share affectionate glances with Tess about how absurd he is. Like every other man in Carol, he is superfluous, a minor pot hole in a road that leads Carol and Therese only to each other.

I’ve seen Carol multiple times, and without fail, men in the theater spend a good portion of the film laughing uneasily; and several times, I’ve watched men stand up and leave in the middle of the show. I’ve seen male critics from the biggest entertainment publications on the internet complain that Carol isn’t a good movie because in real life a woman would never leave Kyle Chandler.

On the first day of their road trip, Carol asks Therese if she misses Richard and she cheerfully replies, “No, I haven’t thought about him all day!”

The joke’s on Richard, and men everywhere who feel entitled to a world that revolves around their whims. It’s a good line, one of my all-time favorite lines of dialogue ever committed to film. Unfortunately, encouraging women to forget men isn’t a great strategy when you’re trying to convince an organization historically dominated by masculinity to acknowledge your genius.

If Carol really wanted an Oscar for Best Picture, Haynes should have had Harge and Carol reunite as he sewed a severed arm back onto her body and chased away the bear that mauled her, waving his torch and singing the song of heroic, indispensable men and dudes and fellas and lads and boys and brotherhoods, all along the way.