The repeal of DADT is for many the defining moment of queer progress in 2011. It’s an unquestionably positive, for servicemembers and America as a whole, and even better, the momentum of that victory might still be bringing us towards equality. There are already several lawsuits pending against DOMA, which the government has already indicated it no longer has any intention of defending, and they’re starting to pile up. This week those groups opposing DOMA reiterated their commitment to seeing it end, and they now have the Servicemembers Legal Defense Network on their side. Although DADT means that military personnel are no longer required to keep their families and partners secret, they also don’t get the same rights as straight spouses, like housing benefits or military IDs. Despite their tendency to put the word “gay” in “scare quotes,” The New American correctly observes that now that members of the military can talk about their families publicly, they’re talking about how they want them to have equal treatment.

“As plaintiffs, we are fighting to receive the same benefits and opportunities as our married heterosexual counterparts,” said [Charlie Morgan] in a statement issued by SLDN. “This discrimination causes undue financial and emotional hardship for our families.” Additionally, Morgan said she recently had a recurrence of cancer and worries “every day that my health may take a turn for the worse, and Karen [her partner] would be unable to receive the survivor’s benefits to help take care of our daughter. We are only asking for fair and equitable treatment as a recognized family.” 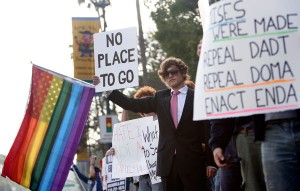 Several members of the armed services filed a lawsuit against DOMA on October 27 with the District Court of Massachusetts, arguing among other things that DOMA represents “a threat to national security” because soldiers can’t be sure that their families are safe or secure. Their lawsuit joins many others, including but not limited to Windsor v. United States and Gill v. Office of Personnel Management. Several of these lawsuits have been around for years, but this week we might finally see progress — there’s a hearing scheduled in the Senate Judiciary Committee on November 3, in which the judiciary committee will debate legislation connected to a repeal and discuss the Respect for Marriage Act.

After the hearing, the lawyers that the House of Representatives has (confusingly) hired in spite of the dictate of our own Department of Justice, will have a chance to respond. Paul D. Clement, who’s said to be earning as much as 1.5 million, has until Dec. 1 to respond. So far the slow demise of DOMA has looked like a series of briefs back and forth — the anti-DOMA briefs inspiring and and intelligent, and the ones from Clement’s team, well, less so. There are plenty of bright legal minds who believe that DOMA is inarguably unconstitutional, and most of Clements’ arguments so far have been the same tired shtick that didn’t hold up in the Prop 8 trial. Can his response bring something new that might change the game? For 1.5 million, the House seems like they’re betting on it.

DOMA has kept families all over America from enjoying the rights of first-class citizens since 1996. DADT haunted us from 1993 to 2011, when America and the Pentagon were finally able to recognize that hurting the people who wanted to help keep America safe wasn’t making anyone better off. If those same people can also testify that keeping families from having the rights of everyone else in America isn’t helping anyone either, will it finally make a difference? Maybe starting on November 3, we’ll get a chance to find out.