Brazil has had an interesting past few months. Public dissatisfaction with governmental corruption, high taxes, bad infrastructure, and Rio de Janeiro’s decision to host the 2014 World Cup and the 2016 Olympic Games (both of which which will incur massive costs) has led to the biggest protests the country has seen in decades. Just this past Thursday, tens of thousands of teachers, civil servants, hospital employees, and other unionized workers participated in a nationwide strike for better working conditions and public services, marching for hours and blocking eighty highways and the country’s biggest port. There have been enormous riots, police violence, and a level of participation across demographics that suggests things won’t calm down anytime soon. In the midst of this unrest, one of these groups — LGBT people and their allies — is hoping to have their voices heard. 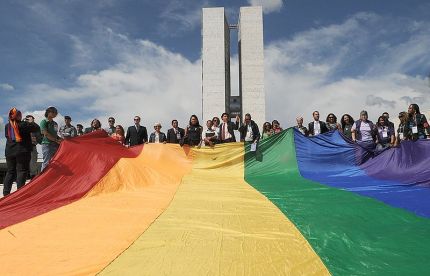 LGBT PROTESTERS OUTSIDE THE NATIONAL CONGRESS (VIA AGENCIA BRASIL)

This is a timely decision for reasons beyond bandwagon-jumping. Back in March, an Evangelical Christian pastor named Marco Feliciano was elected president of the Brazilian House of Representatives’ Human Rights Committee despite a history of racist and homophobic statements — among other things, Feliciano has described AIDS as a “gay cancer” and called African people “cursed.” Feliciano was appointed by commission, not by public vote, and a poll in Folha de Sao Paulo, the country’s largest newspaper, showed that 84% of Brazilians surveyed want him to step down (some of these 84% took to the streets to underline their point). In late June, Feliciano’s committee passed a bill that “allows psychologists to treat homosexuality as a disorder or pathology,” overturning a 1999 decision by the Federal Psychological Council that banned this kind of treatment. The “Gay Cure” bill was massively protested, and withdrawn after it became clear it would be vetoed, but the fact that it passed in the Human Rights Committee is frightening.

If the legislative halls seem scary, the situation on the streets is even worse. Brazil has more anti-LGBT hate crimes than almost any other country. An official statement released in late June shows that anti-LGBT violence in Brazil has increased 46.6% in the past year — there were 9,982 reported incidents of “psychological violence, physical violence, [or] discrimination,” compared to last year’s 6,809. Many of these incidents are physical attacks: 125 trans* people were murdered in Brazil last year, and a 2011 report by Grupo Gay di Bahia found that gaybashings occur, on average, once every 36 hours. “You can’t look at those numbers and deny that there’s homophobia in this country,” said the National LGBT Council’s Janaina Oliveira. In April, Gustavo Bernardes, the general coordinator of Promotion for LGBT Rights, announced the creation of a national system to “monitor aggressions” and offer “security, legal assistance and psychological help” to victims of homophobic and transphobic violence. But these groups hope to prevent the violence in the first place with a bill of their own. 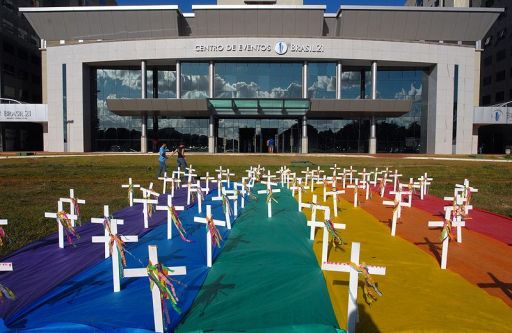 MEMORIALS FOR VICTIMS OF HATE CRIMES (VIA AGENCIA BRASIL)

PLC 122/06, or the “anti-homophobia bill,” was approved in the House of Representatives in 2006 and has languished in the Brazilian Senate since then, despite initial support from Brazilian President Dilma Rousseff. The legislation would amend existing anti-discrimination laws to specifically include “sexual orientation and gender identity.” These laws, which already apply to “age, race, color, national origin, disability, religion, sex, marital status, political affiliation, pregnancy, and citizenship,” levy significant penalties to employers, educational institutions, business owners, and landlords that use discriminatory practices. The bill also includes clauses specifically protecting the right of LGBT people to “express and manifest affection in public or private places open to all people.” Similar bills have already been passed in many Brazilian states, including Sao Paulo and Rio de Janeiro. 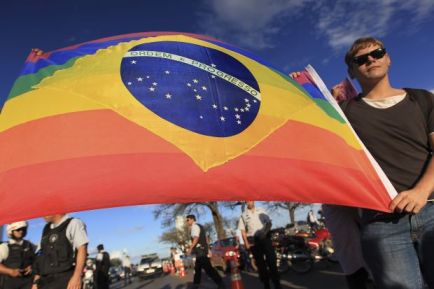 Whether the whole nation will follow suit remains to be seen. Despite the less-than-stellar cultural climate and the increasing presence of Evangelical Christians in the legislature, Brazil has a history of relative political progressiveness when it comes to LGBT issues. LGBT people have been able to serve openly in the military since 1969 (way before it was cool!), although some gay soldiers say the environment there is not supportive. The first ever governmentally sponsored national LGBT conference was held in Brazil in 2008, and the first National Black LGBT conference followed four years later. Changing one’s legal gender assignment has been allowed since 2009, and as of 2007 sex reassignment surgery is free under Brazil’s health care system (although only a very limited subset of people qualifies for either of these provisions, and trans* identification is still classified as a pathology). The country legalized same-sex civil unions at the national level in 2011, and this May a court detemined that civil unions must be recognized as marriages if the couple requests it. The Brazilian Supreme Court ruled unanimously to legalize gay adoption in 2010, and also recently guaranteed gay couples’ legal access to assisted fertilization.

Still, the growing power of the Evangelical lobby puts further progress in jeopardy. Hopefully the collective power of the Brazilian people — who have, besides killing the Gay Cure bill, already passed a law dedicating oil royalties to health and education and convinced President Rousseff to meet with representatives from youth and LGBT groups — will extend to these vital issues as well.