Yesterday Supreme Court Justice Sonia Sotomayor issued a temporary stay on enforcement of the contraceptive coverage requirements in the Affordable Care Act (aka. Obamacare). Acting on a request from Little Sisters of the Poor Home for the Aged, a Denver-based organization of Catholic nuns, the block applies to a group of Roman Catholic nonprofits subscribed to health coverage from the Christian Brothers Employee Benefit Trust.

Per the compromise developed last year by the Department of Health and Human Services, religiously affiliated organizations such as the Little Sisters are not legally obligated to pay for or administer coverage of birth control under the ACA. Instead, insurers pay for the contraception coverage and are reimbursed. In this way religiously affiliated employers do not pay for the birth control benefit but their employees are still able to access it if they so choose. All employers have to do is sign the out-out form — but this, apparently, is still too much to ask. Hence the lawsuit.

With the clock ticking down before the contraceptive mandate went into effect on January 1, Justice Sotomayor signed the order to prevent its full implementation. Hours later she stood before an estimated one million people in Times Square to lead the countdown and drop the ball signaling the start of the new year. 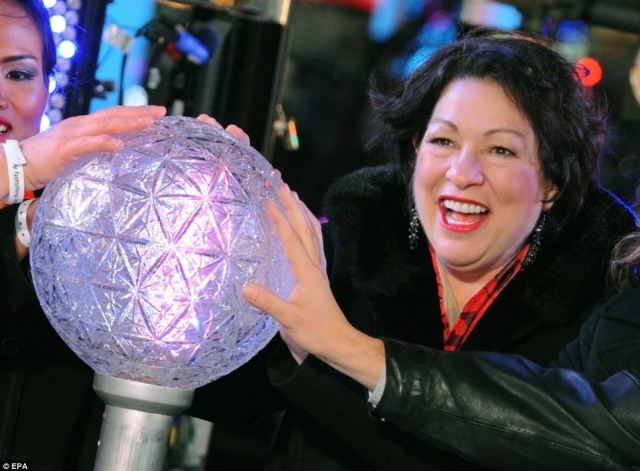 Couldn’t you think of a better way to spend the last day of 2013, Justice Sotomayor? Maybe clean out your freezer? Flip your mattress? Rotate your tires? Image via Daily Mail.

Cecile Richards of Planned Parenthood noted, “The Affordable Care Act ensures that [people] can access birth control without co-pays no matter where they work, just like any other kind of preventive care.” Contraceptive coverage helps people plan their families and take control of their lives.

Are the Little Sisters not aware that people might want to use birth control for medical reasons other than contraception? And even if every single one of their hundreds of workers said they did not need or want birth control, shouldn’t they be given same set of options as everyone else?

Government officials have until Friday morning to respond. From there, the temporary stay will be in place until the Court has had an opportunity to review all of the legal filings. The Supreme Court is expected to make its final ruling on the larger issue this summer.