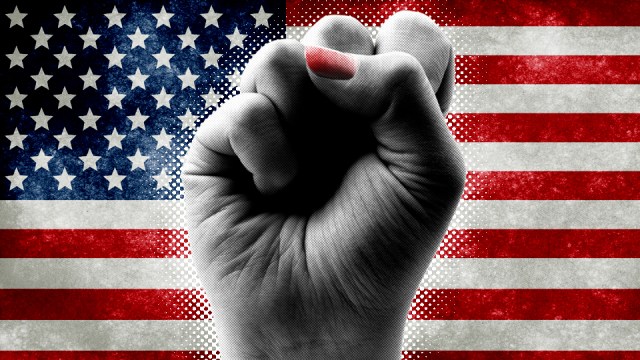 There’s this prevailing attitude that the “culture war” is some kind of discussion that we’re all having. But you know what? Fuuuuuuck that. I know this is divisive and counterproductive and inflammatory or whatever, but not all ideas are created equal. Some ideas are shitty, and I’m sick of coddling people with shitty ideas just because this country has a weird backwards boner for old-timey puritanical rhetoric. No.

In an interview with Scientific American this month, author Jonathan Haidt discusses his new book The Righteous Mind: Why Good People Are Divided by Politics and Religion, in which he seeks to nail down precisely why the right and left in this country are locked in this endless, grumpy impasse—and what we can possibly do to fix it so we can actually get some shit done. Now, I’m all for getting some shit done, but, in this particular war, “peace” isn’t at all what I’m looking for. I’m looking to win. Because I’m right.

Haidt lays out some of the ways that both sides, left and right, carelessly foment divisiveness by pushing each other’s buttons. And he offers some advice:

Once you start thinking about what each side holds sacred and you know the moral foundations that underpin their policy positions, you can do a better job of targeting your moral appeals. And most importantly, you can do a better job of avoiding land mines. For example, it was foolish of the Obama administration to insist that religious schools, hospitals, and other institutions must pay for birth control for all employees. This was extremism in defense of one of their sacralized issues—women’s rights—and it led them to pass a rule that would have forced many Christians to violate some of their sacred values. But it’s not as if those institutions were stopping women from using birth control. The issue was just whether religious institutions should pay for birth control in health insurance policies. It’s like forcing synagogues to buy pork lunches for their non-jewish employees. It triggered outrage, and fed into the long-simmering idea that the Democrats are conducting a “war on religion.”

Conversely, the various Republican bills forcing women who want abortions to get a medically unnecessary transvaginal ultrasound—same thing in reverse. In defense of their sacred value (right to life, protect every fetus), they legislated that doctors would have to harm and degrade their own patients. This triggered outrage and fed into the long-simmering idea that the Republicans are conducting a “war on women.” So I think my book will help both sides avoid committing “sacrilege” by stepping on sacred values so often, and I think it could help them think more clearly about how to reach the other side.

Conservatives ARE waging a “war on women.” Liberals, by contrast, are certainly not waging a “war on religion.” I don’t give a one shit about your religion. I’m not saying your religion is bad, I’m not saying it’s good, I just don’t care. It’s annoying, but you can go yell about your religion on the street, you can beg people for wig-money on TV, and you can even come knock on my door (if you like throwing time and energy in the garbage). You can believe literally whatever you want, as long as your beliefs don’t actively restrict the rights of other human beings.

Haidt’s two examples are not parallel. In the first, the birth control example, religious conservatives are fighting for the right to make women’s basic healthcare contingent upon adherence to an arbitrary, conservative moral code. The implication is that a woman’s vagina (and concomitant reproductive organs) is not a part of her body—it’s a separate entity that, because of puritanical religious attitudes toward female sexuality, does not warrant the same medical care as every other fucking (or, rather, non-fucking) part of her body. The specific medical care that a woman needs is between her and her doctor, and if human beings are covered by a medical plan, then human bodies should be covered by that medical plan, regardless of what we do with those bodies. Full stop. Also, kindly stop thinking so much about what I do with my body. It’s creepy.

So the liberal objection, in that example, is to the inhumane restriction of women’s rights. It’s not some awkward “sacrilege,” and it is certainly not “extremism.” Women are humans (surprise!), and it is objectively correct to stand up for human rights. I am not “oppressing” you by trying to stop you from oppressing me.

Also, “religious liberty” is bullshit in this context. There are all sorts of things in the Bible that we legislate against, but you don’t hear religious conservatives pitching a fit about their “rights” in those cases. As long as we’re not stoning unclean women to death, then LET THE LADIES HAVE OUR FUCKING MEDICINE.

In the second example, regarding trans-vaginal ultrasounds, the liberal argument is also firmly in the corner of civil rights. The conservative argument is…elsewhere (bananaland!). This one is so ludicrous I can’t believe it made it past the pitch meeting, but here’s the gist. Pro tip: Do not stick stuff in people’s vaginas if they don’t want you to. Conservatives aren’t raising liberal hackles because they’re “stepping on sacred values” (as though those values sprang up fully-formed out of nowhere, as though we defend them blindly)—liberals are pissed because conservative lawmakers, in Haidt’s own words, “legislated that doctors would have to harm and degrade their own patients.” Um, YEAH. REASONABLE OBJECTION. A woman is a person. A clump of cells is not.

To debate this is unacceptable and I will not do it.

I believe in right and wrong—just not the opportunistic, politically-driven kind that’s been dredged up out of some old fantasy book and used to subjugate whomever it’s most profitable to subjugate that season. I believe in the kind of right and wrong where you can see people actually get hurt. Where you see people’s rights negated and lives torn up. Where a clump of cells is worth more than a human being, and one abusive garbage straight parent is worth more than two loving, stable gay parents. That’s real. The other shit is not. Fucking up my life is not covered by your “religious freedom.”

Honestly, I’m all for trying to understand where the other side is coming from, for being an open and accepting person, but too often in the debate between left and right in this country, it comes down to a conflict between rationality and irrationality. And I’m sorry, if you deliberately shun evidence and call me an elitist for adhering to facts, then this is no longer a discussion. We don’t have to debate, say, whether or not women should be allowed to work outside of the home. Or whether or not black people should be allowed to vote. Or whether NAMBLA should have a seat at the UN or whatever. This isn’t some subjective circumstance that we need to discuss and consult literally all sides—it’s not up for discussion. People just get to have the rights. They just do.

If the “culture war” were an actual war, it wouldn’t be one of those sad, ambiguous wars where you’re not sure which side is the “good guys”—it would be the fucking war at the end of Lord of the Rings. And I’m sorry, but Sauron ran Mordor into the ground (seriously, dude, just NO infrastructure??), he would have made a terrible president, and I’m not interested in sparing his feelings just because he, personally, likes living in the middle of a stanky volcano waste. The rest of us don’t, because it’s dangerous and scary and there’s no furniture and no sunlight and all our clothes smell like brimstone. This is not something we need to discuss. All non-orcs who don’t want to live in Mordor say, “Yaaaaaaaaaayah!”