Two years ago, Illinois state voted to legalize civil unions between same-sex couples. At the time, it was groundbreaking; winning a legal right to marriage seemed so far off it wasn’t really worth considering. But what seemed impossible two years ago is now becoming more and more likely.

On Thursday, Valentine’s Day, the Illinois State Senate approved a bill which would legalize same-sex marriage. This doesn’t mean that marriage is legal in Illinois; the bill also needs to approved by the state House, and then signed by the governor (although Governor Pat Quinn has indicated that he would sign the bill if it reaches his desk). But even if this isn’t the end of the line for Illinois, it’s still a major victory; it represents a sea change on this issue for the state of Illinois, which may represent a larger sea change for the nation as a whole. Even very recently, it was inconceivable to many that the number of votes needed for same-sex marriage could be won, but the Senate’s vote on Thursday was decisive – 34-21. All but one of the 34 were Democrats, which means the shift in opinion isn’t as bipartisan as one might hope. But even those Democratic votes were a long shot; as the New York Times observes, many of those people have changed their stance even since November:

“The people we would have assumed were ‘no’ votes two months earlier now wanted to have a conversation and understand this issue more,” [director of Midwest Lambda Legal Jim Bennett] said. “Since then, it really feels like a snowball.” 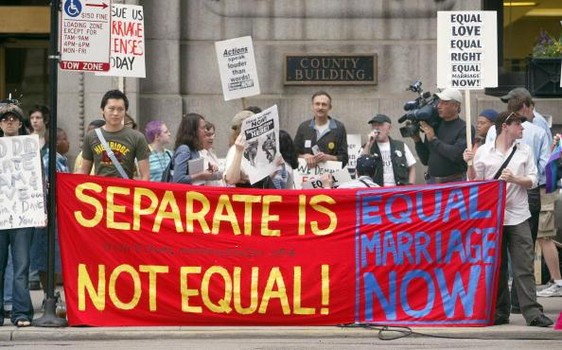 There’s already an ongoing legal battle, led by Lambda Legal, where 16 Illinois same-sex couples are pursuing marriage equality outside of the legislative process. Their lawsuit is separate from the bill’s legislative progress, although it has the same aim.

Although Illinois Republicans largely oppose the bill, voicing commonly heard fears – that Illinois schools will have to “teach” gay marriage, that it will somehow take away freedoms from religious institutions – Illinois’ vote has spotlighted at least two Republicans who recognize the ways in which this bill actually embodies the beliefs of their party, like Illinois GOP Chairman Pat Brady, who said “…giving gay and lesbian couples the freedom to get married honours the best conservative principles. It strengthens families and reinforces a key Republican value – that the law should treat all citizens equally.” Republican senator Jason Barickman also voted for the bill, saying that “I think it was the right thing to do… It’s a vote that I understand some have varying opinions on, but I feel that I voted in the correct way.”

The state senate vote also appears to be part of a larger trend that’s been evident in American politics for the past year or so – whereas supporting gay rights may once have been considered a political liability, many now consider it a political necessity. Bennett notes that “I think it’s a safer vote to vote with us than to vote against us at this point.” That’s good news, but it’s even better news that legislators like Barickman also appear to be voting for equality for reasons other than political expediency; Illinois may be an example of the way in which people are genuinely thinking about their stance on this issue and whether it might be time to reevaluate. For the sake of the citizens of Illinois, hopefully the legislators of the House are willing to come to this issue with an open mind as well. Representative Greg Harris is optimistic about the bill’s chances in the House, but refused to speculate about when the vote in the House might occur. Since the scheduling of the vote is essentially up to Harris as the bill’s sponsor in the House, his reticence may indicate that he plans on needing more time to make the rounds within the House and court votes. Two years ago, activists responsible for getting civil unions in Illinois reminded the rest of the nation that their work wasn’t done; even if it takes a few more weeks or months, hopefully the House of Representatives of the state of Illinois will honor their work and the families that they work on behalf of to grant full equality.