This is a special UNDERWEAR WEEK EDITION of Idol Worship, a (typically) biweekly devotional to whoever the fuck I’m into. It’s is a no-holds-barred lovefest for my favorite celebrities, rebels and biker chicks; women qualify for this column simply by changing my life and/or moving me deeply. This week I’m having a lot of feelings about the oft-pantsless Bettie Page.

The Resurrection Party was one of the first parties I ever organized. Over 100 people had to have been there, all dressed up as “the people they wished were rising from the dead on Easter.” (Once upon a time I had quite a sense of humor, huh?)

I was Bettie Page.

At the time, it was a bold choice: I’d come to college a year before a wholesome, big-eyed girl next door and was beginning what became my, um, transformation into an adult. My infatuation with pin-ups is a natural extension of my forever nostalgia for a mid-century period I never even existed in. But to choose to embody that? That seemed altogether, well, subversive. Like me turning all the stuff I worried about upside-down just by having the guts to perform it on-pointe and be aware of it at all times. Deeper down, it symbolized sort of an inner shift where I was changing. Those were the final days of a period I collectively scrap as “my past.” I was about to change.

I wore Libby’s orange bathing suit, retro with a built-in skirt- I wore it. Me with the body issues and the self-imposed idea that I was forever unattractive branded onto my then tiny, tiny brain. (I expanded it in years to come.) Me, the girl with fake hair, wearing a bathing suit and my mother’s cardigan.

It was a proper send-off to being a good girl. 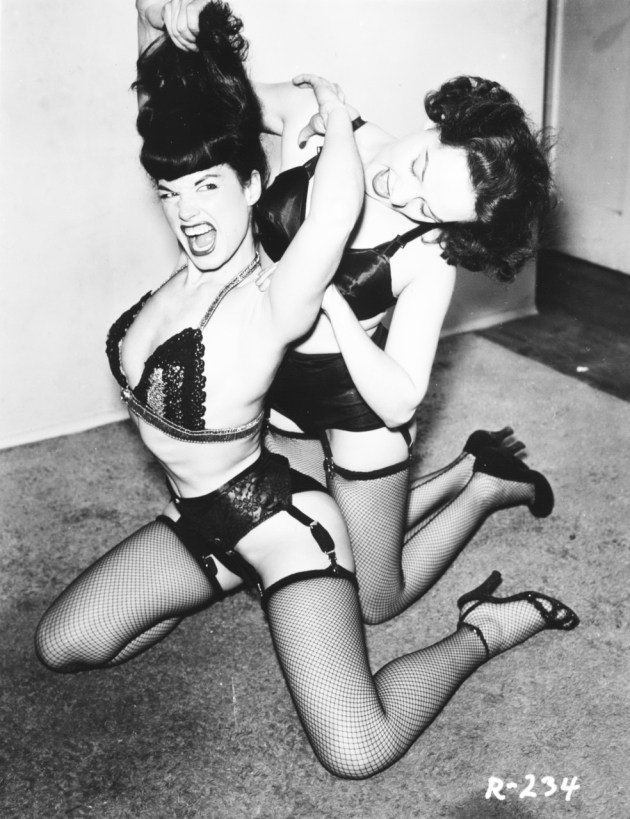 Bettie Page was born in 1923 on April 22, and by the fall of 1950 she was a (yawn) secretary. One day when she was casually walking along the beach alone (I’m melting) she met Jerry Tibbs, who became the first photographer of her new-fangled modeling career. A girl who used to pretend to be famous with her sisters as a teenager was living a fantasy of her own.

From there, a new kind of pinup was born. A new kind of sexy. A new kind of normal. And Bettie Page’s impact, despite resistance from the government and mainstream media, was a new set of sexual norms. She became recognized for her modeling work and her overall beauty and was transformed into an icon while taking photographs where she was engaged in sex play with women and sex play involving kink. She was a Playboy centerfold, “Miss Pinup Girl of the World.” She was what the world wanted. Bad. And we needed it too. 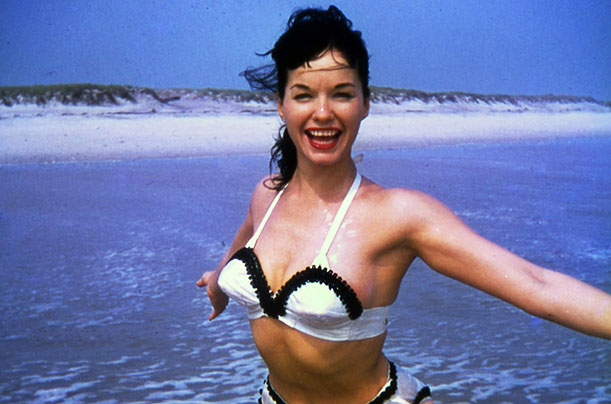 In the Pantheon of Women Who Changed Our Attitudes About Sex, Bettie Page stands in the center. Or maybe she just lords above it. After all, the greats – from Madonna to Dita von Teese – owe their sexual work in part to Page’s first unraveling of America’s boundaries, to her cult following and to her ability to show us what the dark underside of Marilyn Monroe’s bright white dress really looked like. Bettie Page subverted a conservative culture just by embodying it at the same time as she admonished it. She was Marilyn Monroe – without the dress. She never pretended to be interested in the dress. And she never pretended to be afraid to take it off.

Bettie Page was an American Beauty who looked like she has a lot of secrets. And that was what was so sexy about her.

That, and the underwear.