Last week, my friend, Angela, made me an offer I couldn’t refuse.

See, I’d played Ticket to Ride one time last winter and, like so many things that I had once loved in the days of yore, forgot about it over time. The reunion was the stuff of legends. We played until Angela won and then only stopped when she finally had to leave (unfortunately with her board game in tow). 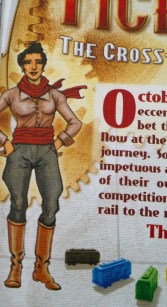 If you haven’t played yet, I’m really not sure what you’re doing with yourself. Ticket to Ride’s got enough rules to make it interesting but is simple enough to play while you’re drinking a beer or three. It’s beautiful design could really only be improved with magnets to help the trains stay in place – which, to be honest, should come with a $50 price tag. It’s great if you’ve got kids or Canadian friends who are looking to learn a little more about American geography. If I’m ever on Jeopardy and I’m asked where Duluth or Sault Ste. Marie are, I’ll be thanking Ticket to Ride in my victory speech.

It’s won USA’s Origins Award, Japan’s Boardgame Prize, Spain’s Juego del año 2005, France’s As d’Or Jeu de l’Année and Germany’s Spiel des Jahres. In other words, people are all about this game. There are also European, German, and Nordic versions if you’re looking for something a little closer to home and there are expansion packs for players who just can’t get enough. And because everything worth anything is online, those of you who can’t handle gaming in three dimensions can get Ticket to Ride on your Xbox, iPad or iPhone/iPod Touch.