Whether you see it as the biggest lesbian cliché or a necessary part of living within queer communities, being friends with an ex — ex-hook-up, ex-girlfriend, ex-wife, ex-activity-partner, ex-never-put-a-label-on-it-so-does-“ex”-even-apply — crosses everyone’s mind sooner or later.

Personally, my ex-partner Jenna is also one of my best friends, so I called her to ask how we got here. “We were dating and it was really fucking shitty, and you take all the shittiness away, and now it’s now. One of the reasons it was hard to break up was because we got along in some ways, and in other ways not so much, so it was like taking away all the ways that we didn’t get along and keeping all the ways we do get along,” Jenna told me. For me, the end of our romantic partnership felt less like a breakup and more like getting my friend back. Moving cities immediately, being each other’s support network, and the fact that we were always better over email helped, too.

Give it space and time.

First, give both yourself and your ex time to heal and start to move on. If you’re still in the middle of the breakup, or if it’s over but it happened this morning, it can be tempting to try to be friends right away — but don’t.

“The first thing I tell everyone is to give it three months. If it was a relationship longer than, let’s say, two years, it should probably be longer, but a three-month cool-off period is essential to give everybody time to heal and start to move on,” says Kate L. Stewart, a psychotherapist and dating coach based in Seattle.

If you can’t give it space and time, talk about it and play nice.

Sometimes you can’t just totally disengage from someone for a few months. You might share property or kids or pets; you might work together. If you’re polyamorous, you might be dating the same person. If that’s the case, be nice even when it’s hard to be nice. “It is really important to be as nice as you can, which can be a really big challenge if there are bad feelings between the two people or depending on what the breakup was caused by,” says Stewart.

Then, make sure to talk about what you both need right after the breakup together. Meet somewhere neutral, express your good intentions, and have a conversation about what you both need and what’s possible. “That is a good place to start because it helps both people feel heard in a way. ‘I want this to work, tell me what you need in order to feel comfortable,’” says Stewart. You might not be able to give each other everything you ask for, and that’s okay — listen to each other, and try to figure out what works for both of you.

Has it been at least three months? Have you examined your own motives for friendship and discovered that you just genuinely want to be on good terms with your ex with no ulterior motives? Have you internally sorted out any lingering feelings of love or resentment or both?

When it’s time to reach out, do it by email. Don’t call, don’t text, definitely don’t text with read receipts, and don’t for the love of fuck send an Instagram dm. Give yourself time to gather your thoughts, and give your ex time to do the same before she responds to them. Email implies “a lot more space between the communication so both people feel they could be comfortable with it,” says Stewart. Plus, with an email, the worst case scenario is your ex is still angry and doesn’t write back; with a phone call, the conversation might escalate, she says.

In your email, be super clear. “Really focus on clarity, really use your words. Say, ‘I would like you to know I would like to be friends with you, and if you feel that is impossible or if you are not interested let me know,’” says Stewart.

What if you’re worried your ex will read your email and assume you have feelings you don’t have, or see something that’s not there? “If someone is going to misinterpret an email, I think they’ll misinterpret anything, and if they’re reading between the lines in that way in email I think that’s a bad sign for the friendship because someone might have unresolved feelings they haven’t had time to get to, or are so hurt they might never get over it,” says Stewart.

Make sure you’re on the same page.

If one of you or your ex have unresolved feelings for each other, whether resentment or anger or love, you’re not in a good place to be friends. “If one person still has feelings for the other, or if one person is still really resentful of the other, it’s going to be really hard to try to make friendship happen and it’s going to be a really unpleasant experience for the person who has the strong feelings of either attachment and love or anger and resentment,” says Stewart. 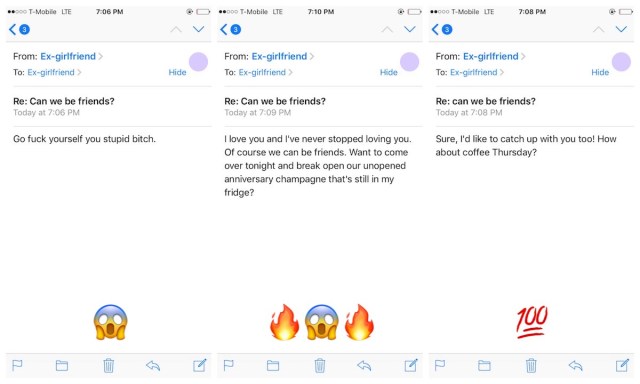 If you both want to be friends and are on the same page, then the first time you meet should feel as much like a hangout with a friend as possible. “Don’t go to your favorite date spot. Don’t do something that seems romantic. […] Even if it means meeting someone for coffee — I know a lot of people are like, yawn, that’s so boring and who cares, but if there are any feelings of trepidation, definitely start with the most benign thing you can find that’s public,” says Stewart. She also recommends avoiding drinking a lot of, or depending on the relationship any, alcohol.

As you begin to (re)build your friendship, you can start to spend more time together, or do activities that you might have shared in your relationship. But keep avoiding things that carry weight that will make you feel sad or bad. You don’t need to go to the restaurant you celebrated anniversaries in, you don’t need to fuck in the bathroom of the bar where you met, and you don’t need to drive past the old apartment.

Be kind, respectful, supportive, reliable and sincere. “Keep everything really above board, don’t talk bad about them behind their back, don’t show up really late to things, be on your best behaviour, treat them kindly, and make sure they know that you appreciate them and want to be friends with them,” says Stewart.

Be straightforward with your feelings.

If you have feelings, positive or negative, that are going to affect your ex or your friendship with them, it’s your responsibility to share them. That might mean saying you need to take a step back from trying to be friends while you work through the feeling. It might mean deciding to tell your ex that you’re still into her and accepting the consequences. It might mean feeling super awkward. This is different, however, than dumping your feelings about your ex onto them and making them process them with you! Part of a friendship with your ex is being mindful and intentional about what’s healthy and fair for both of you to ask of each other emotionally.

If your ex has feelings, positive or negative, for you, you can’t do much about them unless she shares them. But if she’s acting differently or confusingly around you, it’s okay to check in. “If someone starts sending really weird signals and acting in a way that’s very confusing and you’re on the receiving end of that, you can ask and say ‘hey, I’m just a little unsure about what’s going on here, I feel like I’m getting mixed signals,’ and that can be hard but it’s still worth trying to do. If that doesn’t work, give it a little space and see what happens,” says Stewart.

Friendship with an ex is different from other friendships.

You’ve spent time together in a way you don’t get to with most people in your life. You’ve had sex. You’ve maybe met each other’s families. You’ve shared intense emotional experiences. You know and remember weird intimate things about each other. That history makes friendship with an ex different from friendship with someone who’s only ever been a friend.

Among lesbians, bisexuals, and queer women and people, being friends with your ex also gets complicated because of a culture where friendship often goes along with the possibility of dating. “If we’re looking at two heterosexual women who’ve been friends with each other forever and don’t have feelings for each other because that’s not who they date, it will feel different because ‘do I have feelings for you or do I not have feelings for you’ is not even part of the question. If you’re in the queer community, it can feel like for people who are friends there’s always a question of will we date or will we not date,” says Stewart.

As complicated as the questions that go along with being part of a small community can feel, that’s also why being friendly with exes is so important. Queers are more likely to stay friends with our exes because we might not have huge support networks and, frankly, need all the friends we can get. “People in marginalized communities need the support of other people in that community more,” says Stewart. “And second if you are dating in a community and you know that you’re going to [run into each other] … you don’t want to have a lot of bad energy around if you wind up at the same party or dating the same person or something like that.”

You are not obligated to be friends with your ex.

And finally — you don’t have to be friends with your ex. If she broke your heart, cheated on you, or otherwise ruined your life; you’re not obligated to maintain a friendship or even to maintain contact. If she was abusive or manipulative, be weary of her manipulating you into remaining friends, too! If you’re really “like family” to her or the only one who “truly understands her” then she should’ve treated you better in the relationship. Even if there wasn’t an extreme or abusive element to your relationship or breakup, you don’t owe your ex friendship after the breakup — and she doesn’t owe you either. Although it can seem like you’re the only queer woman on earth who isn’t best friends with her ex, there’s nothing wrong with that!

Carolyn has written 1099 articles for us.