Did you know that smoking is bad for you? Whoa, neither did I! ‘Cause you know, my parents, teachers, and that lady I bummed a light from on the street told me it was, but I thought they were lying until I sat down and starting doing research for this post right here, and damn! That shit is scary. I’m stressed out. Does anyone have a cigarette?

I had my first cigarette when I was 16. I started smoking regularly at 18. I came out as a smoker at 19, because sometimes the truth takes a long time to come to terms with. It was finals week of my freshman year in college. My best friend and I had been up all night ingesting study drugs and shots of espresso, and while standing outside the campus McDonald’s waiting for it to open at 6am rolling cigarette after cigarette, I turned to him and said, “You know, I don’t think this is a social thing anymore.”

At some point you have to stop blaming the big things. You have to stop getting mad at capitalism, booze, Big Tobacco (whatever that means), the abrasiveness of those fucking Truth ads and the deliciousness of cigarettes (mm, cigarettes) and say “I AM A SMOKER (and maybe I’m addicted).” 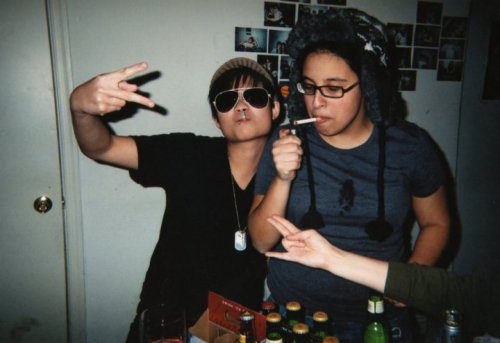 Addiction was different than I had pictured it. I thought addiction to cigarettes was shaky hands, snapping at your loved ones, being unable to sleep, and roaming the streets late at night wearing a torn-up hoodie and sweatpants. I then realized that maybe I had just been watching too many documentaries about crystal meth, and that being addicted to cigarettes was completely different. It was more like the absence of something. What to do while walking from place to place, an excuse to go outside, something to do right after a meal. Addiction is knowing that another cigarette is going to make me nauseous, going to make me want to lie down, going to burn my throat, going to give me a terrible headache — and still wanting another cigarette.

It’s hard because once you say you’re going to quit smoking – to yourself, to your girlfriend, to your friends, to anyone – any time you light a cigarette you’re breaking a promise. Or you have an addiction. Or it starts feeling like ‘a problem.’ Every time I try to quit smoking, I’ll finish off my last pack of cigarettes and go a day without wanting another one. After two days, I’ll feel proud of myself and tell everyone around me, “Did you know it’s been two days since my last cigarette?” After three days, someone will offer me a cigarette, and, feeling like I deserve it, I’ll accept one, remember how much I enjoy smoking, and go out and buy another pack.

Amusement parks are awesome. Kissing girls is awesome. Babies in animal hats are awesome. A patch that would inject nicotine into my bloodstream without me having to take any active initiative?

I knew I didn’t want to try to patch when a friend of mine described it as ‘awesome,’ which I felt was weird, and maybe a little inappropriate. Amusement parks are awesome. Kissing girls is awesome. Babies in animal hats are awesome. A patch that would inject nicotine into my bloodstream without me having to take any active initiative? Well, actually, that did sound kind of awesome. But in a terrible, terrible way that would maybe hook me on the nicotine patch, which would have been expensive, dangerous, and let’s face it, pretty embarrassing.

Like any good lesbian, I love to psychoanalyze every last one of my thoughts, feelings, and actions. So after ‘quitting smoking’ three times in the last month and a half, I thought it might be worth looking past the fact that I was having trouble quitting, and instead looking into the reasons why smoking was so appealing to me in the first place and why it continues to be appealing to me now.

Many moons ago I asked Riese if I could write about smoking and the LGBT community, and she said I could do it if I could find veritable proof that Lesbian Smoking is a thing. So naturally, I googled “LGBT smoking,” and, indeed, a number of articles, studies, and smoker forums popped up.

Fact: Lindsay Lohan and I smoke the same brand of cigarettes

I used to think this was something that existed only in my universe, just in my circle of friends. I’m not saying that smoking makes you gay, or even that being gay makes you a smoker, but I met a lot of my friends in college smoking cigarettes in the quad outside the dorms. We’d recognize the same faces outside, say hi, bum smokes and lights, make small talk, and eventually form relationships that remain incredibly close three years later. (Presumably) by no coincidence, most of my friends are queer of some variety. These friends I made came out with me to our first gay clubs and parties, where we’d line up outside, making conversation with other smokers, inviting the cute ones out for a smoke later to ‘talk’ or ‘get to know each other’ or use the phrase “Pretty girls don’t light their own cigarettes” (ew). We’d also get wrangled into going to frat parties where we didn’t fit in and spend the majority of the night outside talking shit, Solo cup in one hand, cigarette in the other.

And apparently, yes, this is a real thing. According to the Mautner Project, 34% of LGBT adults identify as smokers compared to 24% of heterosexual adults, and lesbians and bisexual women are 2-3 times more likely to smoke cigarettes regularly compared to their straight counterparts. Many of these smokers picked up the habit young, a trend continued by today’s LGBT youth. Today, 59% of LGB-identified teenagers call themselves smokers, whereas only 35% of straight teens do the same.

There’s a lot of speculation on what might be causing this need. Because while smoking cigarettes is a personal choice, the numbers speak too loudly for us not to demand an explanation. It’s not the lack of education — the fact that smoking kills is basically common knowledge these days, and if it’s not a person or a PSA that tells you, it’s often written plainly on packs of cigarettes themselves. So it must be something else.  Some attribute this spike to the prevalence of the bar and club scene as meetup spots for gay folk. And while accurate, using this as the sole reason seems sort of antiquated.

What’s not antiquated though, is the stigma that queer people experience in society, at our jobs and from our families — as well as the stress that comes with it. Many gay youth become distanced from their families, thereby removing a certain pressure to quit. On top of that, smoking is not something that’s traditionally considered a feminine trait (hence the birth of Virginia Slims and other such nonsense). Perhaps queer ladies are saying “Fuck the gender norms, I’m going out for a smoke.” 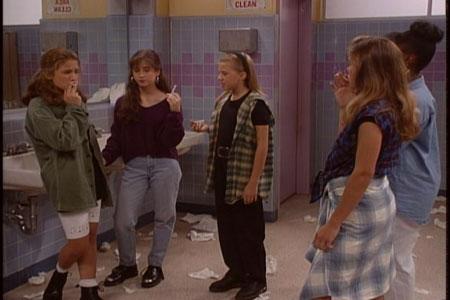 When society ‘others’ us, smoking becomes both an activity of rebellion and of bonding. It becomes tied to our identities. I feel attached to it. It’s a part of my memories. I recall being thrown out of a certain Autostraddle Rodeo Disco party no less than three times in one night and spending the remainder of the evening smoking cigarettes with Intern Emily Choo and striking both matches and conversation with every lady-smoker who came out.

And so being gay might not be a ‘reason’ to start smoking, but it’s certainly a factor that makes it hard to quit.

Smoking regularly has something that’s been with me as long as drinking heavily has, that is to say about three years. Frequent use of substance appears to be common in many demographics that I belong to, including – but not limited to – people who are gay (see above), people who are college-aged, people who wait tables for a living, people who write bad poetry on occasion, and people who earned good grades while growing up in restrictive houses in suburban New York before being set free into college life.

I know it sounds like a cop-out and a cliche, but it’s hard for me to carry out a regular social life without involving alcohol, at least to some degree. I used to think no one went harder than my (gay) group of friends until I turned 21 and started going out after work with the people I waited tables with. And let me tell you, we are a frustrated group of people in need of a tall drink. After 10 hours of being on your feet, being chastised by managers, and answering questions like “Can you tell me about your grilled chicken poonani?” (believe it or not, people frequently mispronounce the word ‘panini’), it’s hard not to be swayed to go out for just one beer. Just one. About half the time I’m pretty successful in ordering ‘a drink or two,’ but no lie, two weeks ago, I meant to go out for one beer and ended up buying a bottle of champagne.

And of course, what goes better with an expensive bar tab than cigarettes?

Before working at this restaurant, I never felt like I ‘needed’ a drink or ‘needed’ a cigarette. It was more like, I’d want one, or I’d like one. At first I thought that maybe I should get a new job, but the hassle of the job search was too much, and besides, the friends I had made had become too valuable to me anyway. I’ve mentioned to them that I’m planning on quitting smoking and cutting down on drinking, and so far they’ve been really supportive and have often mentioned wanting to do the same. Maybe it’s not the job I should re-asses, maybe it’s my definition of ‘need.’ 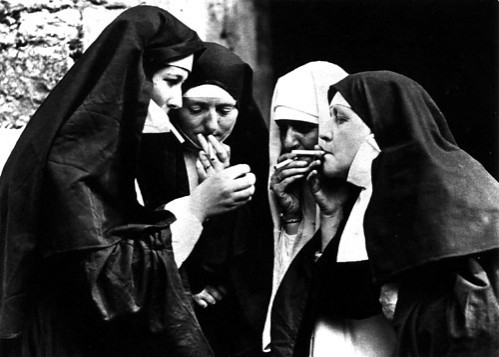 All things considered, what I really need to do is stop making excuses. I need to stop pretending that I’m a victim of so many things or that I have no control over my habits and take responsibility. I’ve been successful in not smoking before. Once when I was 17 (before I was a ‘smoker,’ I guess) and my dad found ashes by my windowsill, and again for almost a year when I was 19 and couldn’t hold someone’s cigarette at a party without getting into an all-night fight with my (then) girlfriend.

Although I may not yet have succeeded in quitting (everyone loves a story about failure just as much as they love a story about success), it’s not so bad. I’m down from a pack every two days to a pack maybe every 10. I may still drink two nights out of the week, but that’s way different from drinking five nights of the week. Progress is slow, change is hard, cliches are accurate. I know this is going to happen because, for the first time, it’s something that I want — all social benefits aside. It’s something I want, not something that anyone else is pressuring me to do. Now all that’s left is finding something to do with my newly-unoccupied lesbian hands.