Did you know there are more than 1700 episodes of House Hunters? It’s a surprisingly big number, but it’s also not exactly surprising, because I think I have maybe seen all of them. It’s also possible that I’ve only seen two episodes: the one with the guy who was looking for a very specific bathtub situation because that’s where he does his work, and any other episode ever. Because they all have the same plot. Somebody says “man-cave” and I get mad. Somebody says “granite countertops” and I get madder. Somebody says “curb appeal” and I get madder still. The kitchen is “perfect for entertaining.” The ensuite master bathroom does NOT have dual vanities, and that could be a deal breaker. And even the knowledge that it is all a setup does nothing to assuage my frustration that I will be renting forever and these people who are annoying on TV can afford to by their own home. I am furious. And I will watch it all day.

Of course, House Hunters is old news nowadays. Over the past few years the real estate TV market has shifted away from just buying and instead toward renovation, and has made the term “house flipping” familiar to wine moms and freelancers with cable the country over. (The first time I ever heard that phrase was when Jason Street flipped Buddy Garrity’s house on Friday Night Lights, and then I don’t think I heard it again for five whole years.) It’s so much better. Not only do these awful people get to own a house, they get to own a dream house with an open floor plan and custom subway tiled shower! I hate them so much! I want to be them! I would not have chosen to install a built-in entertainment center though in this age of ever-expanding televisions. 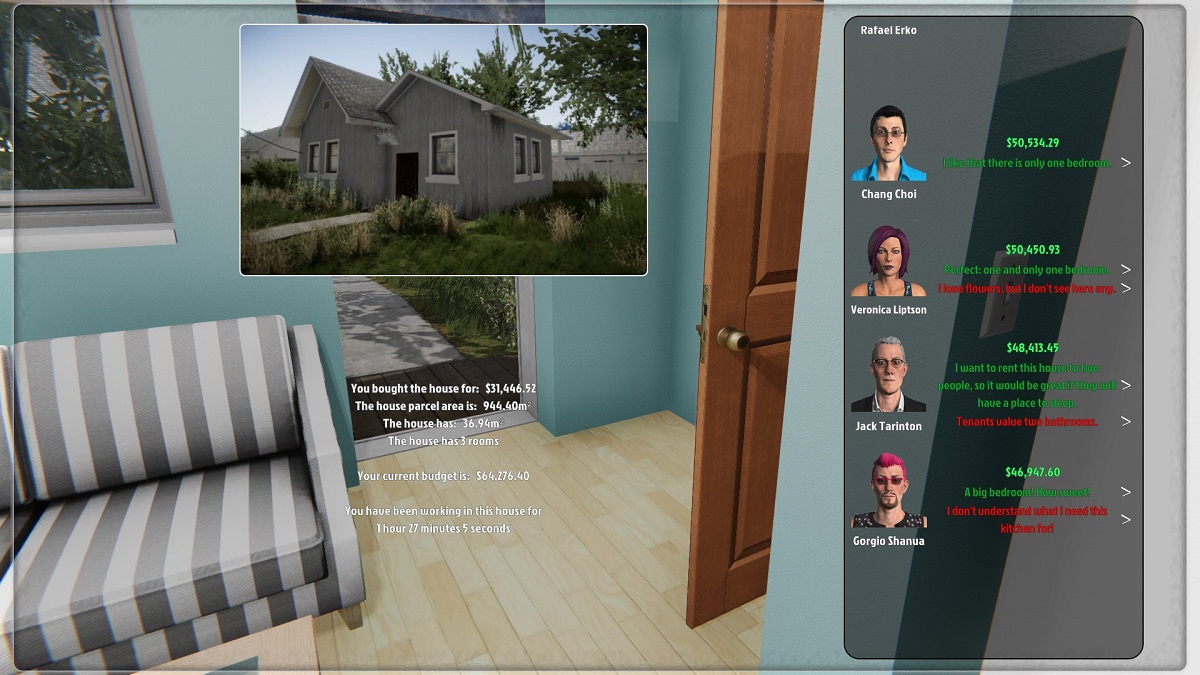 Well, have I got the game for me! House Flipper. It is about flipping houses, if you can believe that. And much like the television shows it is so successfully capitalizing off of, I love it so much and want to change everything about it. I could spend the entire rest of this review complaining about the game, but it wouldn’t even matter because House Flipper is perfect for even existing in the first place.

You start out in a filthy shack of an office, a lowly jack of all trades who longs to flip houses but currently has only a lot more money than I have in real life, but not quite enough to invest in real estate just yet. So you go out on some odd jobs to clean people’s houses and knock down a wall or two and install a fuckton of radiators until you can no longer resist the urge to flip. Then you buy a horrible little house, and try to make it less horrible. 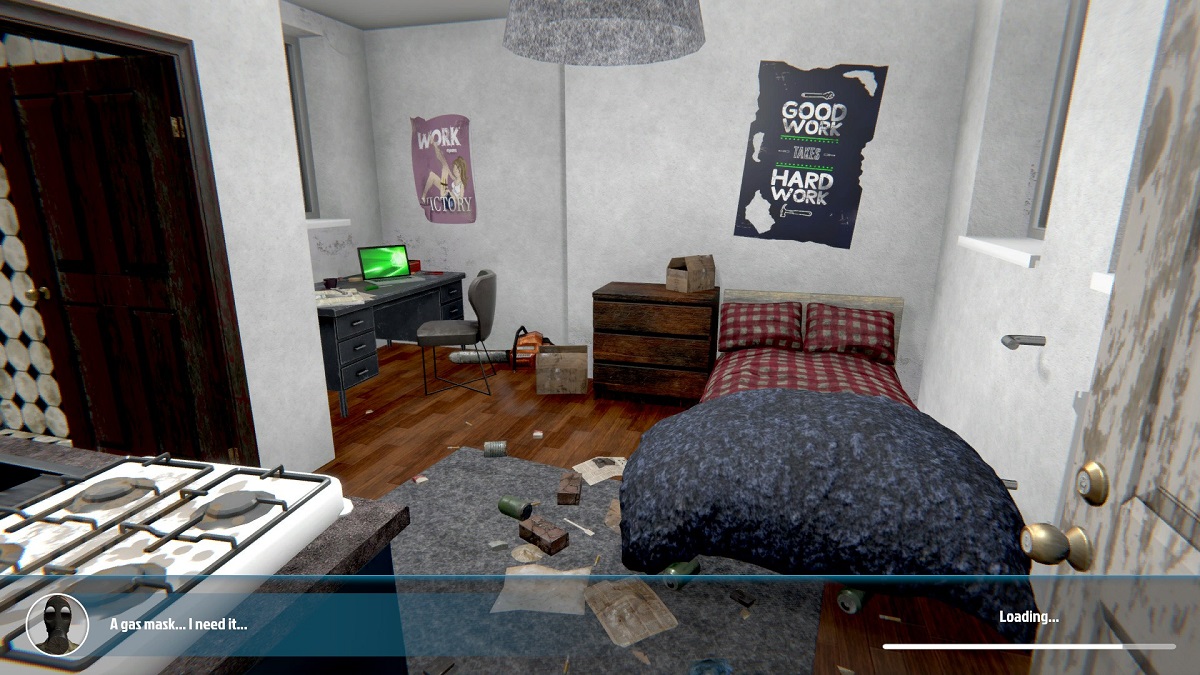 As far as the gameplay goes, House Flipper is just a lot of clicking, and sometimes holding down the left more button. (You will want an actual mouse to play this game. The scroll wheel is the only way to rotate objects.). Click to dispose of trash. Click to demolish a wall. Click and hold to clean. Click and hold to paint. Click to pick up a tile, click and hold to lay the tile down. Click on each individual screw on every appliance you install. Click. Click. Hold. It’s so much clicking. Lucky for me my carpal tunnel is my left hand, or else this game might kill me. Some of it is actually really relaxing — installing appliances, vacuuming up roaches, plastering over holes in the walls. Other parts are frustrating. Why do we need to paint/tile walls one strip at a time when we are allowed to lay down flooring in one fell swoop? Why does washing the windows feel so bad? Why can’t I stop playing even when I am angrily asking these questions of the heavens? Nobody knows! 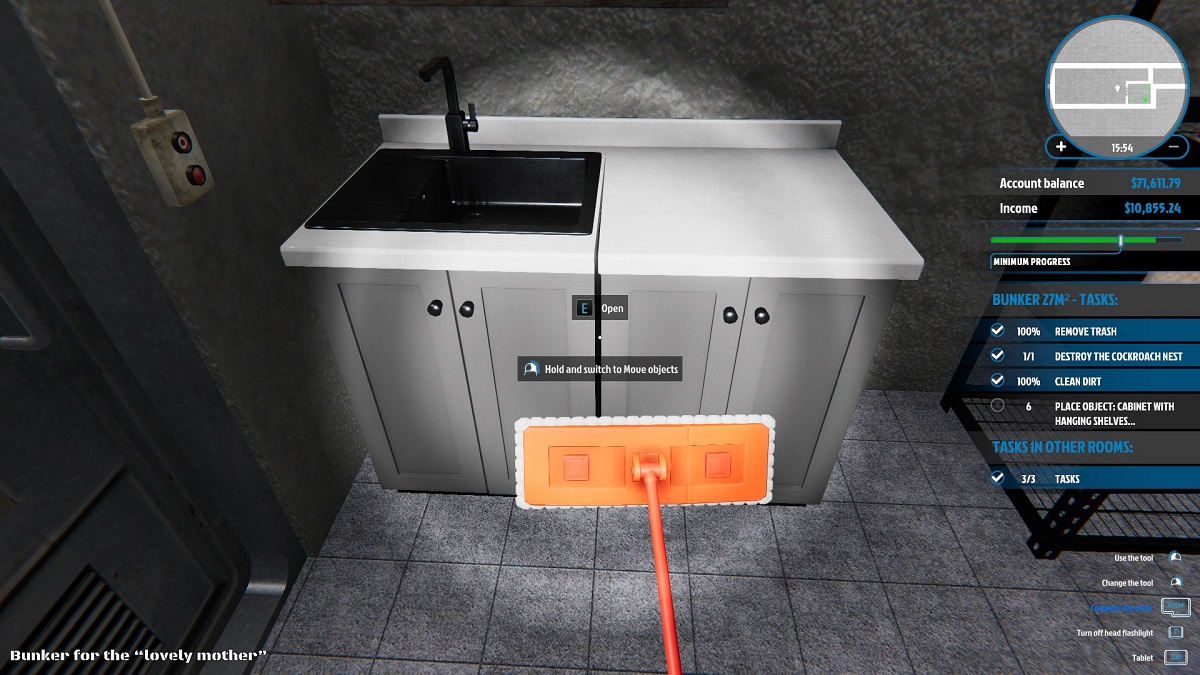 Why won’t these cabinets line up right? A MYSTERY.

Here is what about this game, besides that it exists and I need it. It satisfies my love of order and cleanliness that I am too lazy to implement in my own life. You just click on the garbage and it is gone. You wave the same mop at every surface and everything is now spotless. You can put furniture down and move it and rearrange it and see how it looks with this rug, and you can paint the walls when the room is empty or with a full bedroom set in place and nothing needs a tarp and it comes out smooth every time. It’s not even about fanciness or property ownership as much as it’s about imagining if my house could just be clean right now? It’s a powerful drug, let me tell you. 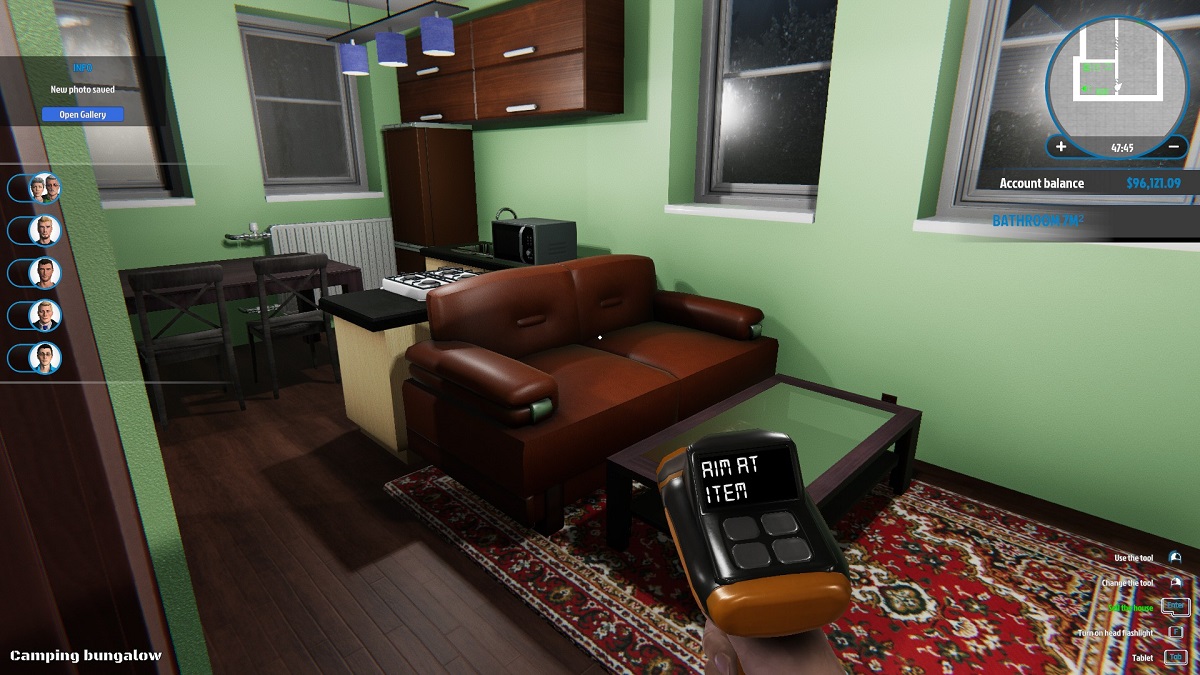 Here is what I do not like, besides that a lot of the controls are frustratingly time consuming. There is just not enough stuff. There are only a handful of tiles to choose from, and most of them are awful. There are not enough kinds of flooring. There are more paint options, but still nothing like the wall of swatches I want to be choosing from like a kid in a hardware store. There is no oven, not even one, that isn’t a part of a larger one-piece kitchen that won’t fit in most of the smaller homes. There are not enough doors, only because for some reason you are not allowed to paint doors. There are not enough curtains. You can’t paint furniture, you’re limited to the options each piece comes in, and those colors/woods are not consistent from item to item. Your steel fridge might not match your steel prefab kitchen, but that’s too bad, because there are not any better options. Everything starts to look the same because there are only so many decent options for a lot of things. Give us more stuff! I love your game but I am tired of installing the same shower in every bathroom! Honestly if they just open it up to modders we will be swimming in interior decorating options faster than you can tile an entire kitchen floor, which is the fastest thing you can do in this game besides making trash disappear.

Other things I want: The ability to demolish exterior walls. Any landscaping, even if just to mow the front lawn. Porches! Patios and patio furniture. Roofing. Dimensions on all furniture/cabinets so that I know before I pay that the two kitchen sections that look like they match are actually different heights for some reason. More stackable stuff — I wanted to put toilet paper into the bathroom cabinet and candles on the windowsill next to one of the two bathtubs that exist in this video game, but it wasn’t allowed. 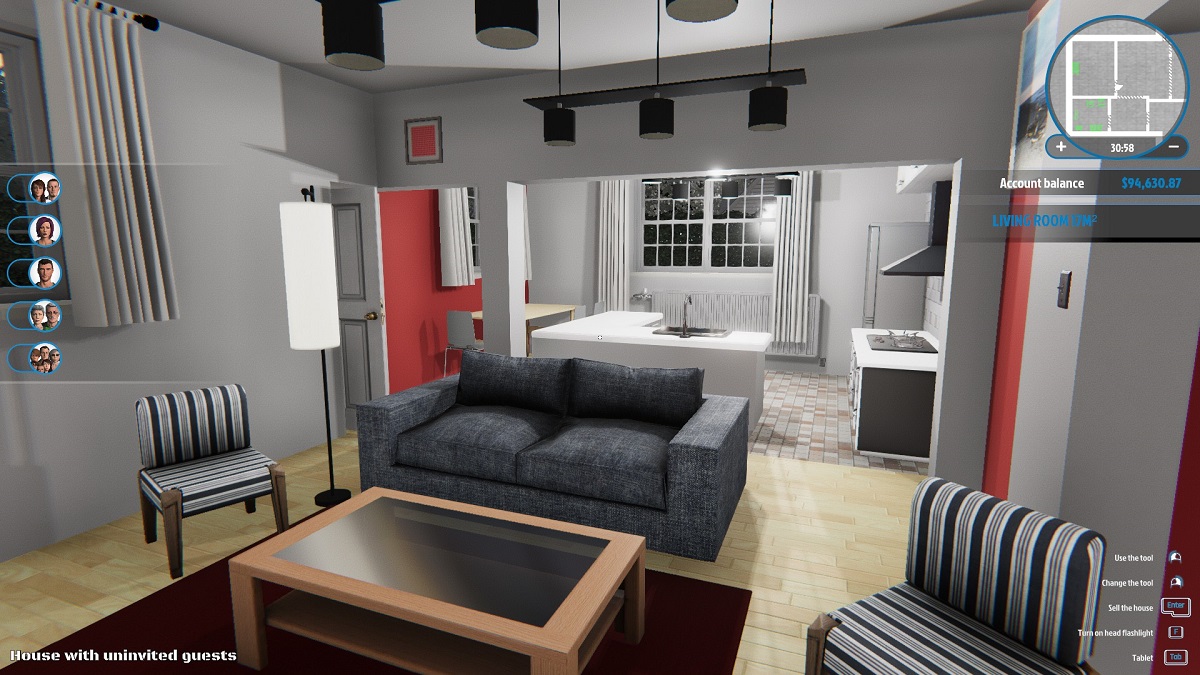 I’m actually kind of proud of how this one came out okay.

Wow. I really am just complaining about an awful lot. But I feel like complaining is not a bad thing because the game is still in active development and maybe they’ll listen and maybe it will get even better? Because I promise you that it is very good, in that it is exactly what it is, which is a thing that I think a lot of people will find infuriating and satisfying and scratching of a very particular itch. And don’t listen to me anyway, I just now after more than ten hours figured out which curtains fit on which windows, after selling three houses with only blinds and being mad at the game for it. It’s $20 on Steam for Windows and Mac, which sounds like a lot now that I’m typing it, but I never considered not buying it and never felt any kind of way about the price once I started playing because I was too busy becoming a pretend real estate tycoon to worry about real life money. Now that’s what I call escapism.