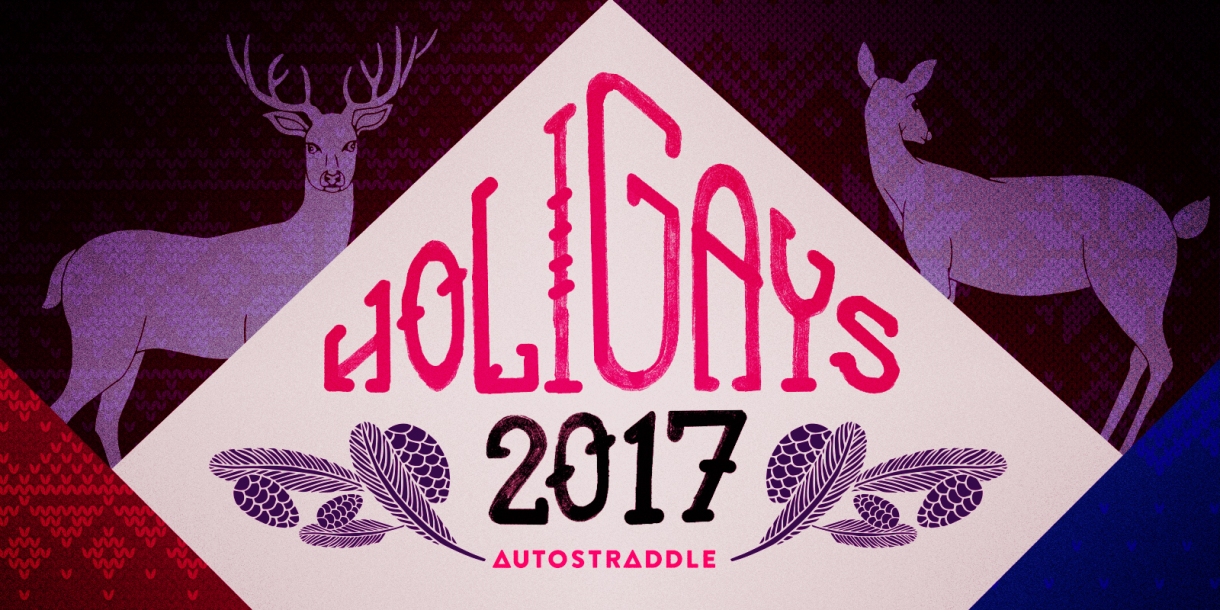 I freaking love being a queer geek girl (even if I’m often reluctant to admit that I’m a nerd). Just a quick warning, I’m going to use geek and nerd interchangeably here for a minute even though I know nerds will tell me they’re different things. I’m talking about the people who make up fandoms, the people who unabashedly love the things they love and dedicate their social media accounts to coming up with headcanons and theories and fanart, the people who are unironically enthusiastic. Queer nerds and geeks are most of my favorite people. They’re hopeful and optimistic, they’re creative, they’re resilient and they’re cool. There are lots of great things about being a queer nerd, but maybe the best is that you get to be friends with other queer nerds. They’re really the best people. And they make great merch. Here’s just a sampling of some of the amazing queer nerds and geeks I get to call friends (and some I wish I could call friends.) 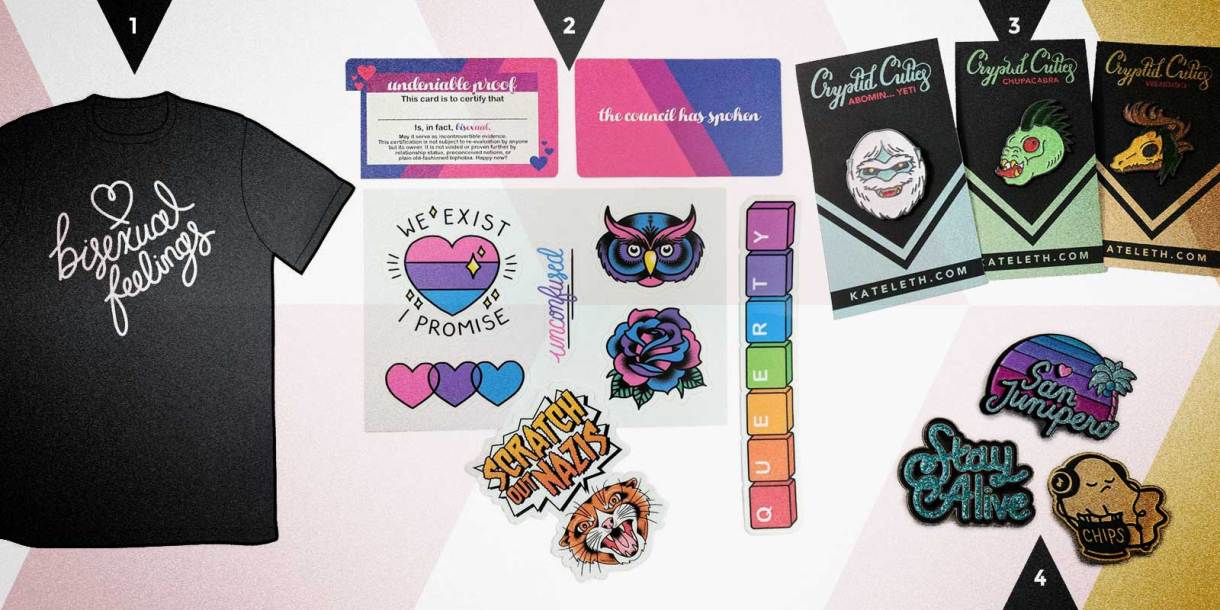 If there’s anyone who has a more legitimate claim at the title of Queen of the Nerds, it’s my bisexual hero, Kate Leth. I think literally every nerd of every gender that I know is at least a little bit in love with her, and I know that all of us are in love with the enamel pins, stickers and shirts that she makes. I know as a proud bisexual woman I love her Bisexual Feelings shirt and Bi stickers, and I wear her San Junipero pin all the time and want a bunch of her other ones. 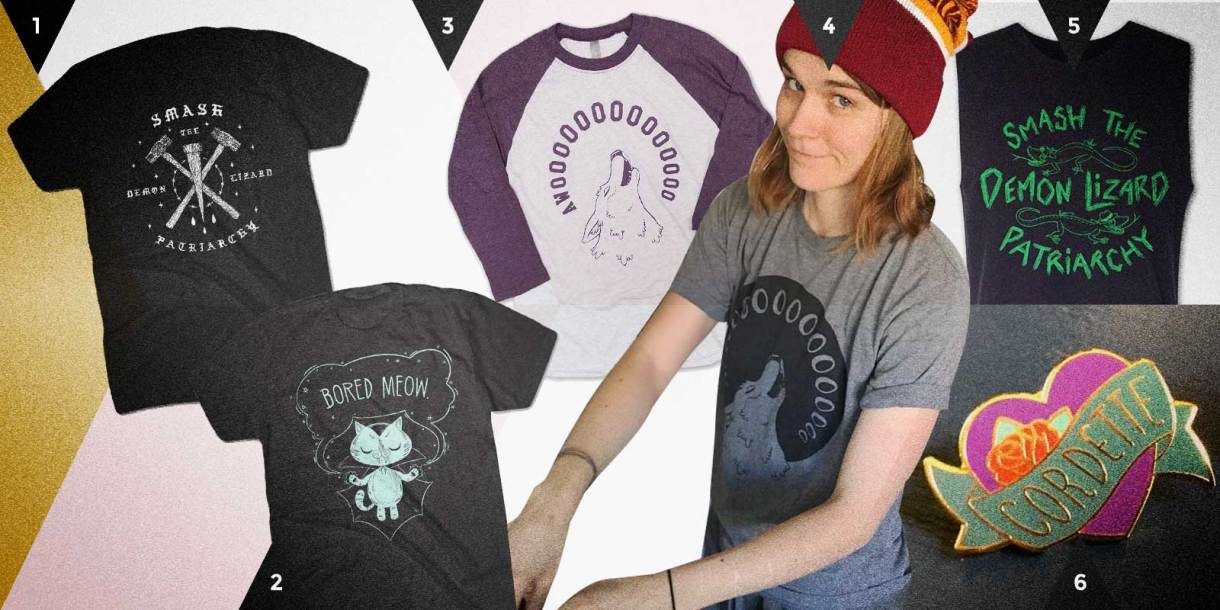 Have you seen nerds wearing these tees or that Muscle Tank? They always look so great! If you want me to get a crush on you, maybe wear the Awooo Baseball tee with the Awooo Pom Hat and the Cordette Enamel Pin and tell me about why you like Anya. Also, we’ve got a special Autostraddle exclusive discount code for 10% off with the code BEEPME, just for you! 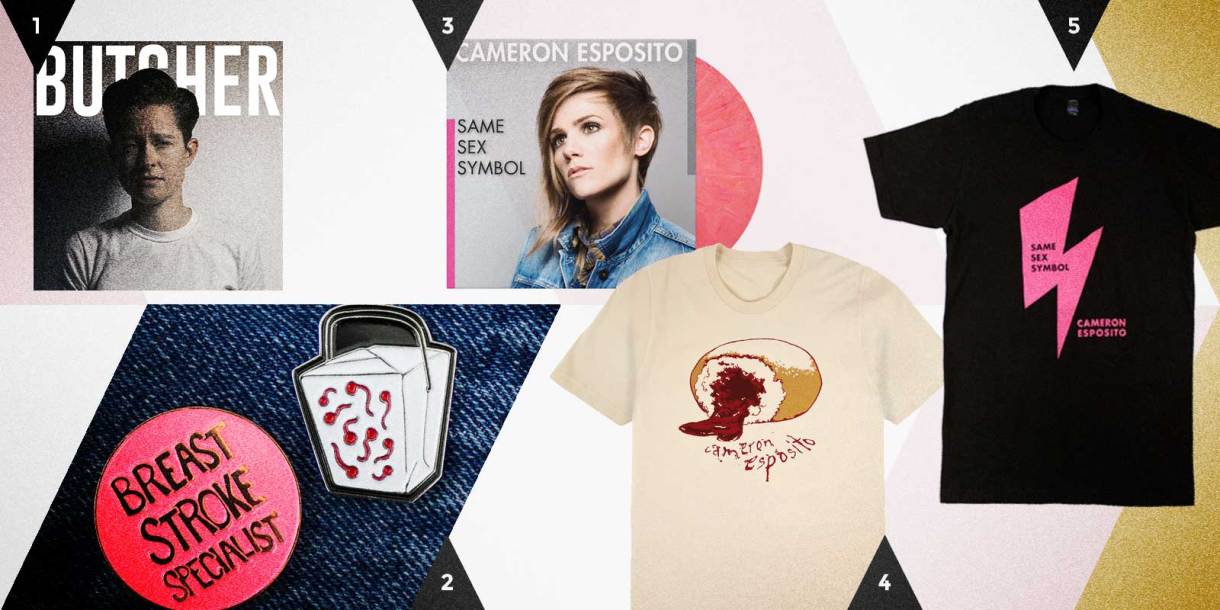 You might be saying, “but Mey, these two are too cool to be nerds!” But I say to you, get them talking about haircuts or action and science fiction movies or baseball and they become instant nerds. Whether you want to show your fandom by buying and listening to their comedy albums, or by wearing their shirts, you’re gonna look nerdy either way. 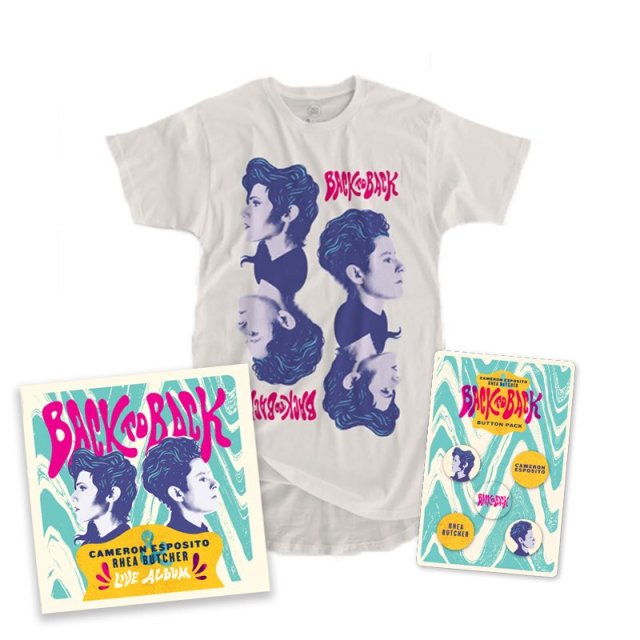 Also! Cameron and Rhea are releasing a brand new live comedy album Back to Back, that is the first comedy album by a wife/wife pair! Both of these people are hilarious and I can’t even imagine how funny this album will be. Plus, you can preorder it and get a t-shirt or buttons! 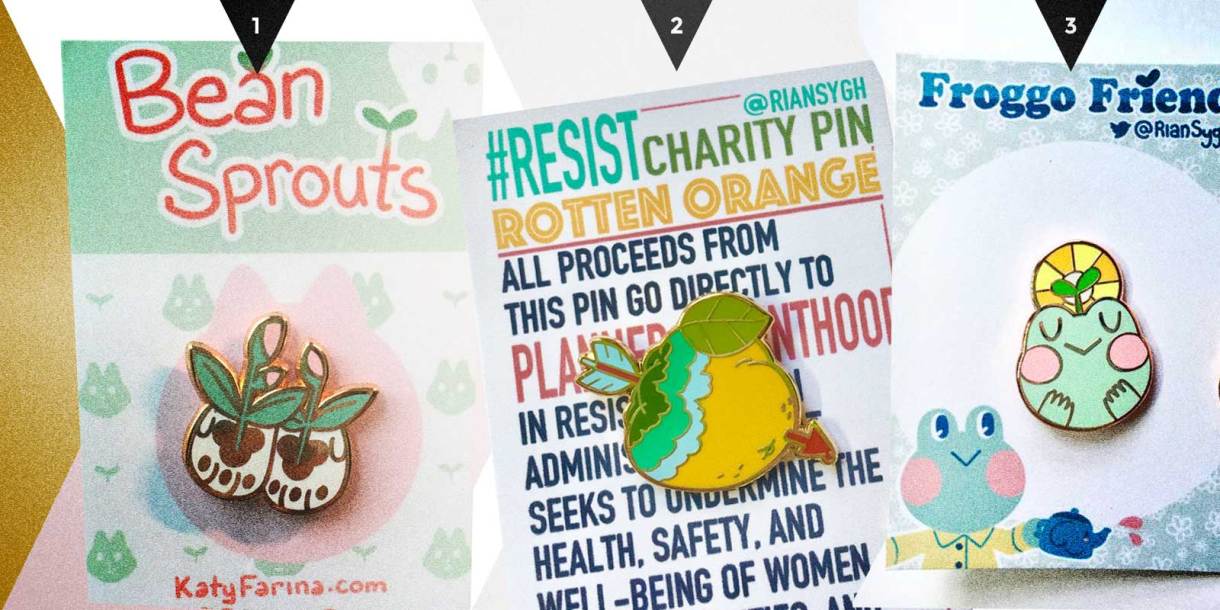 Katy and Rian are one of my favorite Queer Nerd couples around. Rian is a trans artist, Diet Coke connesiur and co-creator of the Boom! comic book Backstagers, and Katy is the artist behind the wonderful Steven Universe comics that were written by Mel Gillman. Both of them are super nice and make super nice enamel pins. 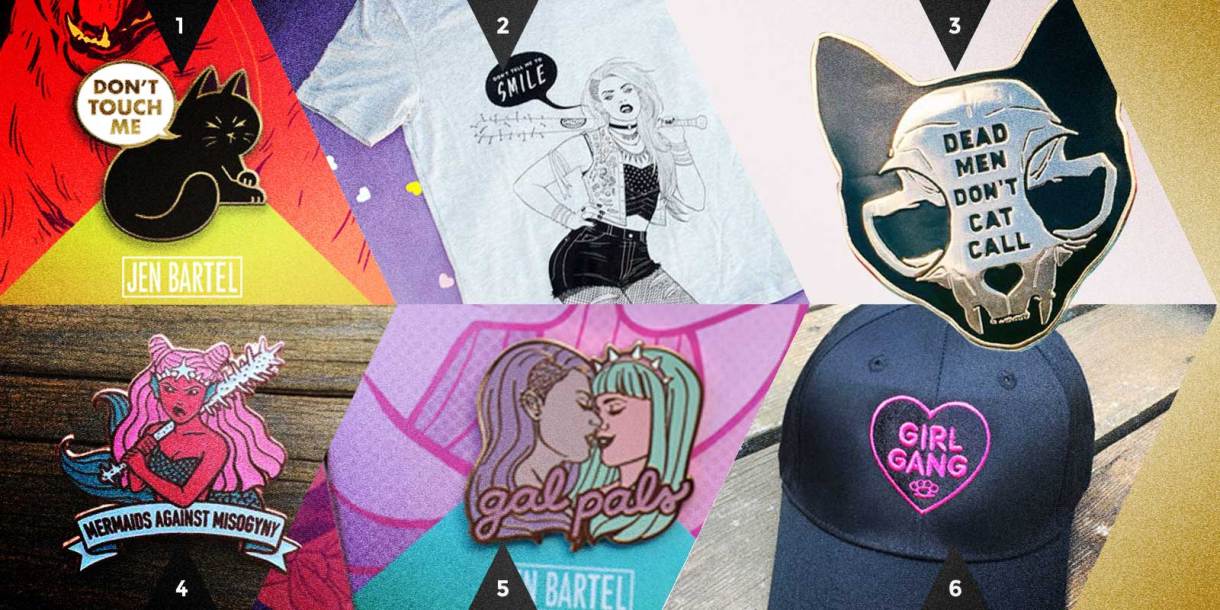 Jen Bartel is one of the hottest artists in all of comics. If you follow any queer comic characters at the Big Two, you’ve almost definitely seen some of her art. She also has some of the best pins and shirts on the internet, with great messages like “Dead Men Don’t Catcall,” “Don’t @ Me,” “Support Your Local Girl Gang,” “Don’t Tell Me to Smile” and “Mermaids Against Misogyny.” 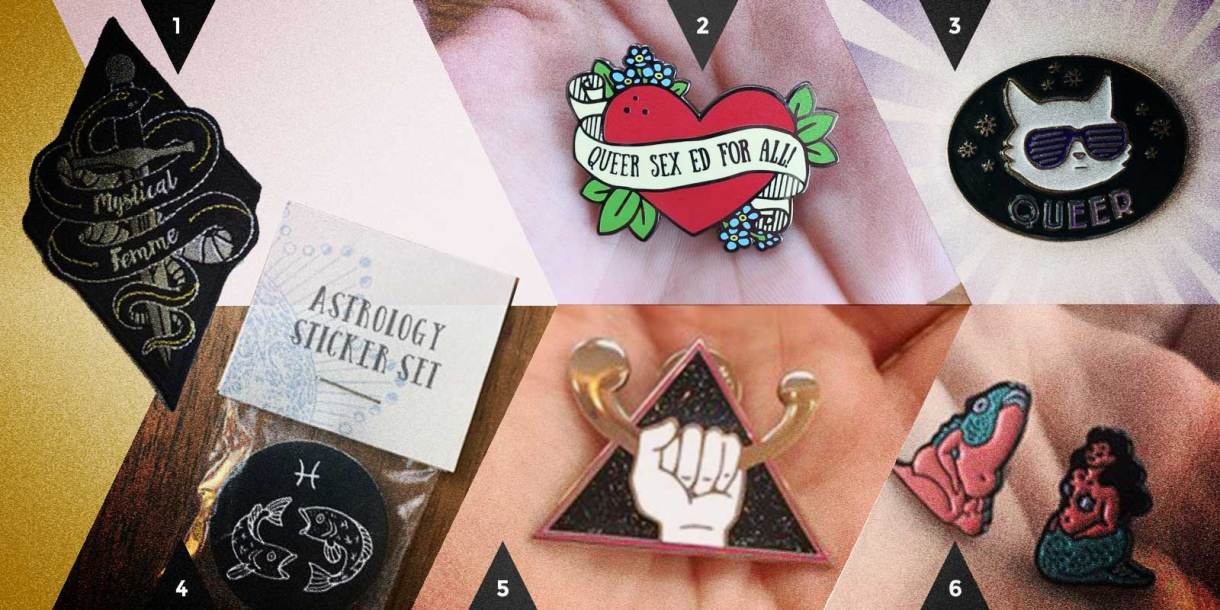 You might recognize Isabella Rotman for her work at A-Camp or with Jenny Owen Youngs, but she also sells a bunch of great pins, celebrating things like sex toys, quality sex education and mermaids. Her store also has a bunch of cool stickers and zines that will make great stocking stuffers. 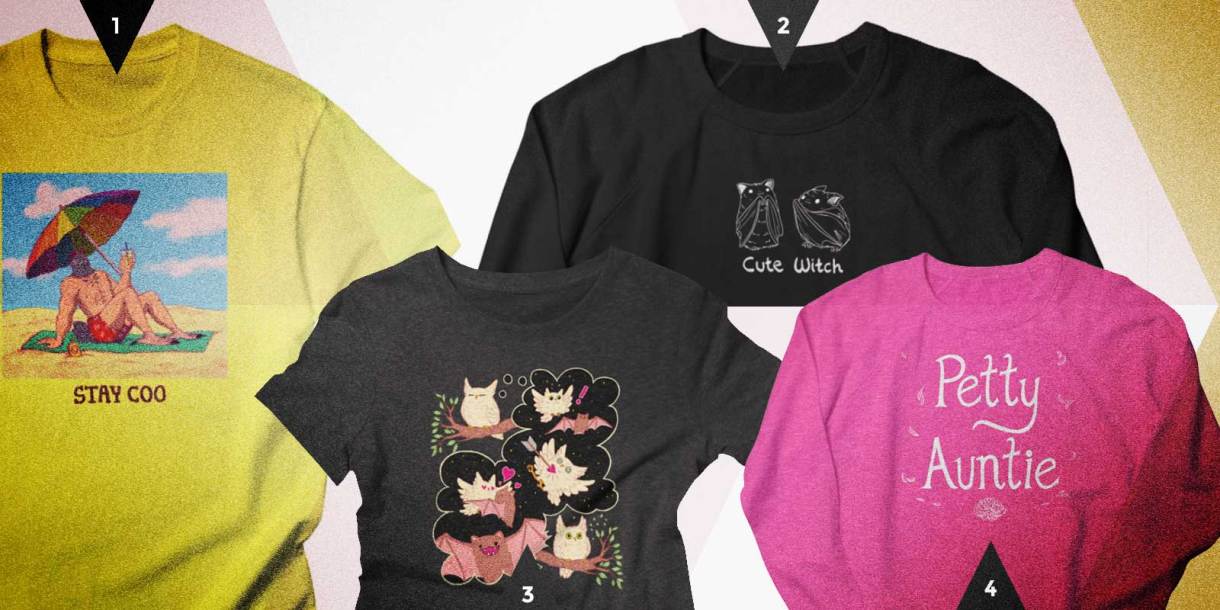 Wendy is one of my favorite artists, and largely because she draws really, really adorable animals. Now, you can take “adorable” to mean cute, like the bats on the Cute Witch and Sweet Dreams shirts, or adorable like the hunk that is Terry Shin, Pigeon Boyfriend. Also, for all the Petty QTPOC Aunties out there, she’s got a perfect shirt that will let your friends know how much you’re judging their bad taste in spices. You can get all of these as tees, sweatshirts, tanks or even mugs! And just in time for winter, Wendy is offering special sale prices, just for you, on her Cute Witch and Sweet Dreams designs for mugs and sweatshirts! These sale prices last until December 15, so scoop them up right now!