I wanted to write about this week’s book not because it’s unknown but because it’s a YA title that deserves more reading outside of the genre’s usual audience, and because there are things I want to say about it that I haven’t read elsewhere: things that make it queer, inventive, and otherwise a standout. Its sequel also came out less than two months ago, so now seems like a good time to spread the word about this captivating trilogy-in-progress.

Many of you know of Michelle Tea, prolific San Francisco-based writer, founder of the Radar Reading Series, and queer lit icon. I loved the honesty and manic energy of books like Valencia, and when Tea launched her debut YA fantasy novel, Mermaid in Chelsea Creek, last summer, I fell in love with her again for a whole new set of reasons. If you adore any of Tea’s other books, you’ll find Mermaid in Chelsea Creek to be every bit as transgressive and illuminating. If you ever escaped into the magical realms created by J.K. Rowling or Tamora Pierce, or if you got hooked on what dystopian YA like the Hunger Games had to say about class and privilege, you’ll relish Mermaid‘s intriguing mixture of magic and social realism. 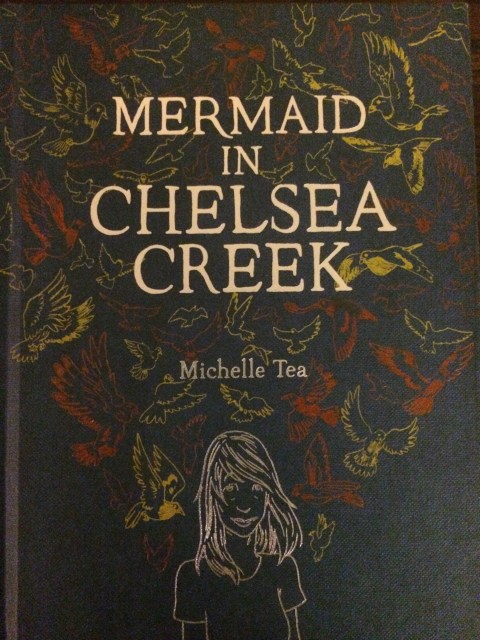 The plot is archetypal: Sophie, a 13-year-old working-class girl, discovers that she is destined to save humanity through her ability to reach inside people’s emotions and heal their pain. (She’s able to recover from the emotional toll of this work by guzzling down salt.) A colorful cast of mentors help her come to terms with her powers and prepare to defeat a villain. Despite having a straight teen protagonist, Mermaid in Chelsea Creek reflects its author’s queer sensibilities. So many female-dominated YA novels feature love triangles, but Sophie’s story is refreshingly free of romantic interests. While her best friend, Ella, is struck by boy fever, stubborn, snarly-haired Sophie is preoccupied with figuring out her nascent abilities and trying to keep her loved ones safe. This first book in the Chelsea trilogy, and the second, Girl at the Bottom of the Sea, offer a convincing character arc of emotional maturation that’s inflected by many relationships but doesn’t rely on any. The novel also stands out for its positive portrayal of a gender-nonconforming character. One of Sophie’s most interesting mentors is a young, masculine-presenting lesbian named Angel. Readers see Angel dealing with microaggressions on a daily basis, but she possesses the toughness and self-regard to shield herself from others; in a neat metaphor, magical shielding is the skill she teaches Sophie. She offers guidance, nurturing, and friendship, and is well fleshed out; in the second book of the trilogy, we see her follow her dream of becoming a youth drug counselor, applying her talent for teaching to something less magical but equally important.

Among the novel’s closest YA sisters are Tamora Pierce’s Circle of Magic books, about four youth who literally work magic through crafts like metalworking and weaving. Tea creates a similar connection between the ordinary and the otherworldly in the first installment of her Chelsea trilogy. Rather than having her characters cast spells by communing with houseplants or the weather, Tea imbues the run-down immigrant town of Chelsea, Massachusetts with improbable magic. It may not be Hogwarts, but in this author’s deft hands, a grubby working-class community becomes as wondrous a setting as any place could be. There’s a mermaid in the trash-filled creek, spouting obscenities and counsel. Sophie meets her while playing the “pass-out game” — an entertainment she partakes in with her friend Ella, which consists of hyperventilating in order to faint and have visions. (It’s clear that there isn’t much to do in Chelsea, unless you know where to find the magic.) Sophie finds friendship in a charismatic flock of talking pigeons, a mentor in a haggard grocery store owner, and a villain at the town dump. The beauty of Michelle Tea’s Chelsea is that the grit and glitter are inextricable. 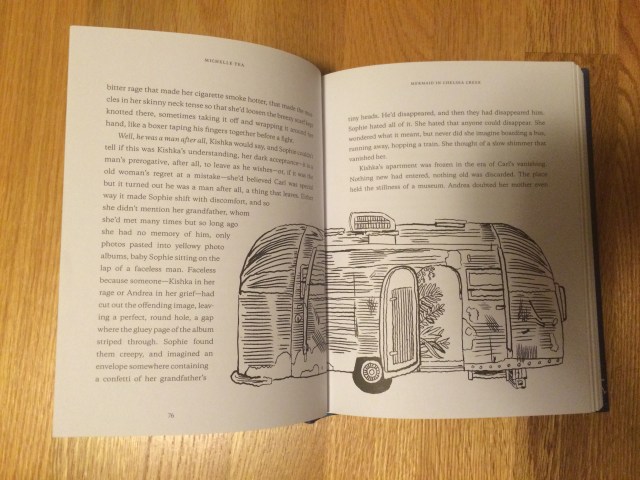 One can’t write about the magic in Mermaid in Chelsea Creek without mentioning its connections with family and history. It’s noteworthy that much of the magic Sophie encounters draws on her own Polish heritage, from her mermaid advisor Syrena, who normally guards a river in Poland, to the magic techniques she learns from her aunt Hennie, who calls them by their Polish names. “You lose words, you lose power, lose magic,” she explains. Similarly, Angel’s powers come from the curandera tradition she has learned from her mother, and much of her emotional strength seems to stem from their bond. It soon becomes clear that Chelsea’s waves of immigrants have brought their own magical traditions to the town, and that their myths, scoffed at by Sophie’s generation, contain kernels of truth.

Family is a source of power in Tea’s Chelsea, but it’s also a source of struggle. In the novel’s world, good and evil are embodied in Sophie’s relatives in a way that reflects how families relate in the real world. This characterization can be black and white at times, as is common in YA — the kindly aunt is very, very good, and the mean grandmother turns out to be very, very evil. However, this tableau of good and evil is superimposed on more complex dynamics. Sophie envies Angel’s close bond with her implied-to-be-single mother, because her own single mother, Andrea, is harried and neglectful. Sophie’s relationship with Andrea is one of the more heartbreaking aspects of the book, and it becomes more so as backstory is revealed. Sophie’s grandmother’s evil is portrayed through familial acts of abuse, enabling, and emotional manipulation. We come to hate this smug character not because she’s “bad” (a refrain repeated too many times), but for many of the same reasons we hate J.K. Rowling’s Professor Umbridge. Luckily, deep friendships are there to carry Sophie through the hard times.

Mermaid in Chelsea Creek is a splendid example of world-building, and its strength lies in the way it imbues working-class life and realistic relationships with otherworldliness. The sequel, Girl at the Bottom of the Sea, sees Sophie joining the mermaid Syrena underwater and deepening her magical abilities. Sophie’s heart-based magic continues to explore themes of emotional complexity, and Tea again creates an enjoyable world, thoughtfully envisioning what a mermaid civilization would look like (think egg laying and retractable baleen). Less happens in the second book, and without its predecessor’s grounding in everyday struggles, the stakes feel lower. However, it’s still a beautiful read for those who enjoy alternate universes and tales of coming into power. I look forward to finding out what the third installment of the Chelsea trilogy has in store!