A song called “High School” used to play on the radio when I was in actual high school. The song’s narrator reminisced from the safe distance of fatherhood: “It’s kind of hard with all that sexual confusion. Sometimes you don’t know if you’re gay or straight. But what’s the difference? It’s a wonderful delusion. Most times you won’t make it past second base.” This sentiment is echoed in a more nuanced, less goofy way in one of my favorite poetry buys, a tiny little pink book called What It Feels Like for a Girl that packs a deceptively powerful emotional punch. It’s a bisexual coming-of-age story told in free verse, full of awe, lust, music, and yes, confusion. 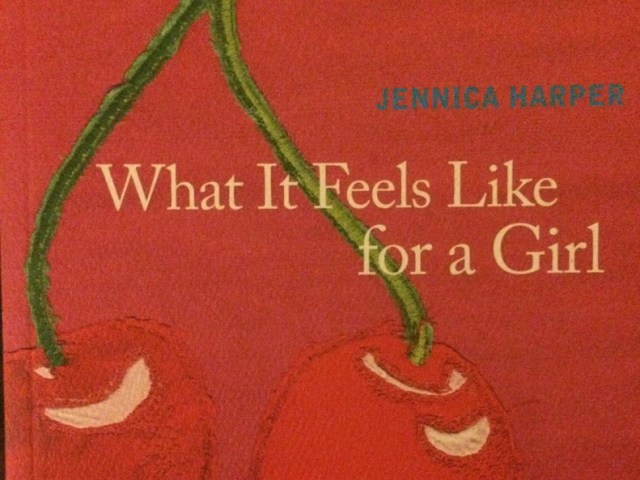 Canadian screenwriter and poet Jennica Harper’s punchy, poignant words have been granted a Silver National Magazine Award, featured twice in the Poetry in Transit project, and gone viral among Mad Men fans. (Her poems in the voice of Sally Draper are delightful.) Harper has described herself, aptly, as a “gateway poet.” Whether or not you’re a poetry person, her plainspoken and perceptive voice will win you over.

What It Feels Like for a Girl centers on two 13-year-olds who meet in gym class: the narrator, addressed in a piercing second person that has the effect of melding our stories with hers, and precocious Angel, who guides her through a labyrinth of sexual exploration via magazines and videos. The two of them get into everything, from Playboy spreads to “Pet fantasies—horses and pups, / pregnant women peeing in cups,” driven by curiosity and a fierce determination to push boundaries: “You’re scared but dying to know.” They become the de facto dispensers of sexual knowledge in school, “warriors” informed by voyeuristic research rather than direct experience. The juxtaposition of juicy subject matter and narrative naiveté offers some fresh and wonderful insights into the sexual body: the women’s bodies have “things peek out. A ragged mountain range, / rubbery and pink. Pencil erasers,” while the men’s feature “moles popping out of holes… squat fire hoses.” The narrator is equally perceptive about performative aspects, “The language of sex, so like the language of prayer… the alpha / and the omega and the oh, oh, oh.”

Two narratives of attraction overlap for the young narrator. As she learns more about the dark sides of desire in herself and others, she finds herself drawn to fantasy men, from dead poets to an imagined family friend. This isn’t the book for you if you dislike having queer literary moments interrupted by sexualized depictions of men, as the poetry has sharp and bright things to say about different-sex desires and experiences. Outside of flash-forwards to future trysts, though, these men exist in the abstract. Meanwhile, the growing magnetism between the two girls is conflicted but concrete. They are possessive of each other, Angel thinking the narrator the “prettiest” and “kindest” girl in school while the narrator is happy to be swept up in Angel’s imaginings of her: “By noticing you, she makes you.” She, too, lays claim to Angel; in fact, “Angel” is a nickname bestowed by the narrator rather than the character’s birth name: “You made each other. You get to name her.” The worldlier of the two, Angel draws the narrator into her orbit. The relationship is both juicy and bittersweet, inflected by occasional touches and things that remain unsaid.

Madonna fandom further cements the girls’ bond — unsurprisingly, given that the book takes its title from one of the Material Girl’s singles. Angel loves the star, and for the narrator, their glamor is similar. The characters’ X-rated explorations interweave with moments from a school dance, where Angel, who “cuts through the air like it is ice and she, / a finger of fire,” pushes those explorations to the limit. A born performer, Angel toes the line between seduction’s magic and its social dangers. It’s at that point that the girls’ complex relationship starts to unravel.

What It Feels Like for a Girl is delightful for its frankness, the addictively poppy rhythm of its language, and its fascinating climate of sexual malleability — in this story, Angel is desired by everyone on the dance floor, regardless of gender. Check this book out if you want to relive the rebellions and uncertainties of your (or someone else’s) teenage years, only more intelligently. It’s a piece of brain candy you’ll enjoy sinking your teeth into.