I’d known for a while that my colleague Colleen McKee had a book out, and one day I bought a copy from her in the break room. When I learned that it combined memoir, poetry, and fiction, I had one burning question: “Who let you do that?!” As it turns out, that’s a question she gets from other writers regularly, and non-writers, she reports, don’t seem to notice.

The book, Nine Kinds of Wrong, is wonderful, and makes a good case for more publishers to open the door to mixed-genre collections. Far from being a grab bag of odds and ends (which can be delightful in a different way), McKee’s book carries a consistent voice across genres, coalescing into a narrative of quiet rebellion, compassionate attention to detail, and elegy for a lost lover. If you’ve enjoyed other ventures into mixed-genre territory, like Amber Dawn’s How Poetry Saved My Life, you’ll love spending time with Nine Kinds of Wrong. 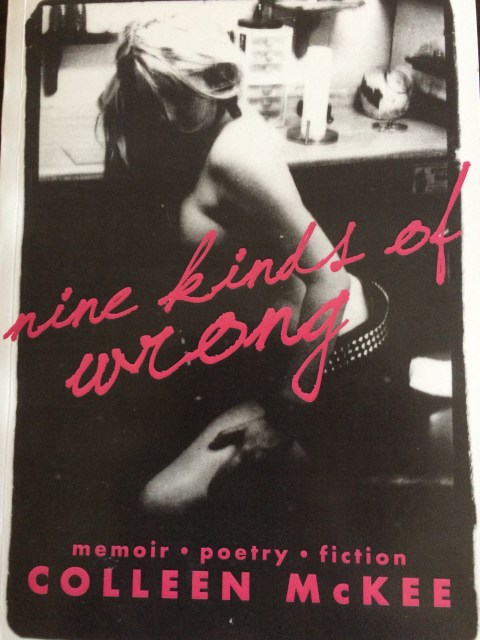 Queer lit, through its very rootedness in transgression of sexual norms, is a tradition of rebellion. While some queer writers have wild tales to tell of lives lived large, McKee’s stories present the rebellion of a smart introvert, which is no less compelling. Morsels of memoir tackle petty crimes like book theft, or raising hell as a vegan in Home Economics class — movingly combined with a Big Gay Crush. Readers meet a cast of ne’er-do-wells who are lovably edgy and never quite seem dangerous. That’s not to say there aren’t sinister moments. The short story “How to Make Kites” unfurls a murder scene reminiscent of Tobias Wolff’s chilling English-class standard “Bullet in the Brain.” McKee, however, is most interested in what makes her characters (whether fictional and factual) human. In one true story, a man just released from prison strokes a woman’s hair for the first time in years, an “inappropriate” public act portrayed with empathy rather than censure; in another, invented one, a “self-proclaimed psycho” waitress invites her lover to make a wish on her falling star tattoo. McKee’s prose and poetry celebrate all kinds of outsiders, from male escorts to asylum patients to passengers on the Chinatown bus.

McKee lends the same tender awareness to her writing’s urban surroundings. This is especially evident in her poetry, which notices “ground glass embedded in cement / like miniscule stars” and a tattoo gun’s “drone like a fist-sized mosquito / beating its steel-tipped wings.” She’s fond of playful subjects like gummi bears (“the gummi / dental confetti / of joy”) and ketchup (“The Germans called the tomato ‘wolf peach,’ believing one bite of the berry could turn a man into a werewolf”).

Death is another frequent presence in the book, especially the death of McKee’s good friend and former lover Miko. Much of the memoir and poetry touches on their complex connection, the relationship between a bisexual woman and a bisexual man who never got his longed-for chance to be a girl: “We wore our engagement rings on our toes. I wouldn’t say we were useless, but practicality was not a virtue in our book.” Miko’s recurrences throughout the text give the effect of a longstanding presence, sometimes in tandem with the narrator’s, sometimes apart, as when McKee commemorates him at “the filthiest bar on the street.” Like real grief, his imprint throughout the book changes but never entirely goes away. After all, as McKee writes in the ritualistic poem “taschlikh,” “Some sins are too beautiful / to ever let go.”