As the first week of the Trump administration slithers along, we’re beginning to see patterns in the campaign promises Trump won’t keep — like maintaining Medicare and Medicaid — and the ones it seems very evident he will, like building a wall between the US and Mexico, limiting immigration of Muslims and refugees, and moving forward with the Dakota Access Pipeline. One thing’s for sure: the actions Trump and his team are moving forward with in their first weeks of the presidency, like the executive orders he signed today, are designed to target vulnerable populations of racial and ethnic minorities in the US.

Today Trump is expected to sign an executive order that will ”shift federal funds toward construction of a wall” between the US and Mexico, the construction of which he says will begin “within months.” He has persisted in claiming that “We’ll be reimbursed at a later date from whatever transaction we make from Mexico… I’m just telling you there will be a payment. It will be in a form, perhaps a complicated form.” This claim is both bizarre and ominous, given that Mexico has repeatedly confirmed that they will not fund a project that, in the words of the Dallas Morning News, they “they haven’t sought and don’t support.” This plan is both legislatively difficult — the amount of money required for a wall of the size he wants would need cooperation from Congress — and logistically complicated. The Texas Observer explains that:

Along the 1,250 miles of Texas-Mexico border, 110 miles of fencing already exist. If the Trump administration decides to construct more fencing along the rest of the Texas border, it will have to navigate deep canyons, a national park, an ever-shifting river and a treaty with Mexico that requires binational consent before structures can be built in the river’s floodplains.

How will all those contradictory facts be reconciled? You probably have about as good an idea as the administration does.

One executive orders Trump signed today also enacts “a temporary ban on most refugees and a suspension of visas for citizens of Syria and six other Middle Eastern and African countries” — not worded as a “Muslim ban” but clearly intended to target immigration from primarily Muslim nations. According to Reuters, the ban is expected to be in place for “several months” and have exceptions for “religious minorities escaping persecution, until more aggressive vetting is in place,” but given the general trends of the administration so far (and the views of would-be Attorney General Jeff Sessions, who has opposed even legal immigration), there may not be reason to realistically expect that immigration restrictions will be lessened in the future. The block on Syrian refugees is “indefinite.” The NYT has published a copy of an early draft of today’s EO on refugees.

Interestingly, as the Washington Post notes, overall American views towards Muslims and Islam have been growing more positive, not less:

WaPo traces the shift to backlash against Trump himself, arguing that “evidence suggests that during the election year, attitudes of most Americans toward Islam and Muslims improved overall precisely because Trump the candidate was seen to have the opposite view,” advancing the thesis that there’s high “incentive for leaders and groups to advance counternarratives to those of Trump’s supporters.”

Trump’s plans are also reported to include “sharply increasing efforts to round up and remove some of the estimated 11 million undocumented immigrants living in the United States — including by enlisting state and local officials to track and apprehend them.” Joanne Lin of the ACLU told the NYT she is “tremendously concerned about the impact that could have on immigrants and families across the country.”

One of the executive orders Trump signed on Monday allows continued construction of the Dakota Access Pipeline, which endangers the health and water quality and violates the land rights of the Standing Rock Sioux and which water protectors have been resisting for months now. It’s likely that this is only the beginning of the Trump administration’s money and land grabs at the expense of America’s Native people, continuing the long history of American governments profiting from violence against Native Americans. Some are concerned that we’ll see a concerted campaign mounted to privatize Native land in order to strip it of resources. From Alaska Indigenous/Countercurrent News:

Saglutupiaġataq’s [“the compulsive liar” in Iñupiatun] administration apparently began mobilizing to pursue the privatization of Indian lands as early as October 2016 with the formation of his 27 member Native American Affairs Coalition. The Coalition is chaired by “Cherokee” pretendian Rep. Markwayne Mullin. Like the termination policy of more than 60 years ago, the Coalition contends that impoverished tribes are saddled by federal regulations that stymie self-reliance and prosperity. Tribal lands should be privatized, it argues, so that American Indians can pursue development projects that lift them out of poverty.

…American Indian reservations are federally owned lands held “in trust” for tribes. The “vast untapped domestic energy reserves” referred to in Saglutupiaġataq’s energy plan are largely within American Indian reservations. These lands would need to be sold or leased to private sector corporations by the federal government in order for development to proceed. But first, tribal jurisdiction over those lands would need to be terminated by Congress and vested in states.

As the NYT has noted, Trump’s team has also decided to hang a portrait of Andrew Jackson, a slaveowner responsible for the Indian Removal Act, in the Oval Office, as “inspiration.”

Trump also used his first days in office to threaten the city of Chicago — a city that during his campaign Trump made clear he associates exclusively with Black people and crime, which are linked inextricably in his mind and rhetoric — with federal law enforcement presence in a tweet. The Chicago Tribune notes that “reference to the city was made on the section of the White House website titled ‘Standing up for our law enforcement community.’ ‘The dangerous anti-police atmosphere in America is wrong,’ it states. ‘The Trump Administration will end it.'” 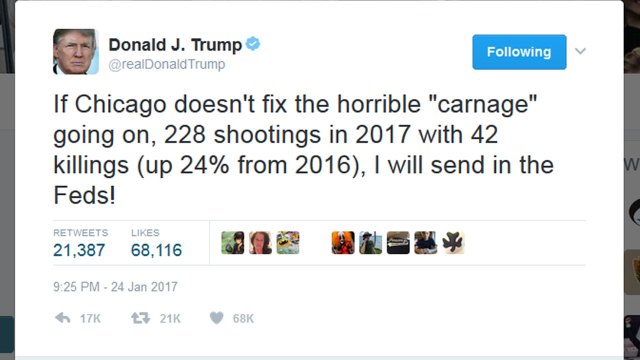 Just a week ago the Department of Justice issued a scathing report on the Chicago Police Department’s excessive force and violence. That report, combined with the fact that Chicago was one of the cities that protested Trump most effectively during his campaign, successfully causing him to cancel a rally, may suggest that he’s planning to make an example of Chicago and set a tone for his pro-police, “tough on crime” administration. By conflating protest against his administration with violent crime and imagined violence against police, Trump is setting up a premise for violent government intervention in Chicago.