Some fairly minor spoilers and graphic images below.

There’s a sequence toward the end of Hellblade: Senua’s Sacrifice that’s more moving or triumphant than the climaxes of like half the action movies I’ve ever seen. (Maybe more, even.) As the music builds and swells, Senua, who is battered and broken and barely standing, cuts down wave after wave of opposing warriors. She manipulates time, slowing her enemies down to a crawl as she darts between them with her blade swinging and slashing. 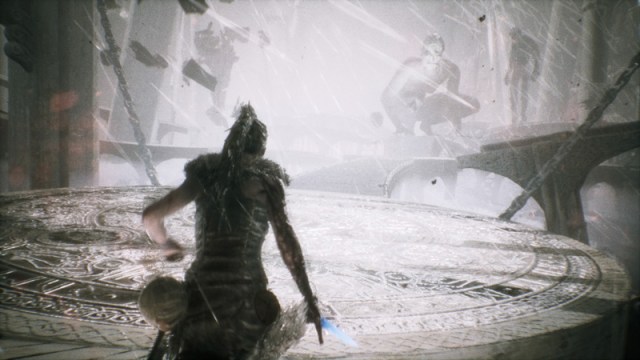 That scene, and others like it, are the very best things about Hellblade. Ninja Theory has created an immersive and stunningly cinematic storytelling experience from beginning to end. There’s no HUD (heads-up display) to track your progress throughout the levels or show the status of Senua’s health, so there’s nothing to distract from the setting — beautiful and awe-inspiring one second and brutally graphic the next — or take you away from the game’s focus on the narrative. 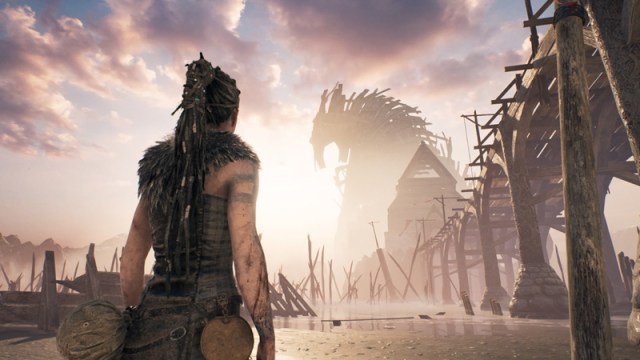 There are some seriously gorgeous shots… 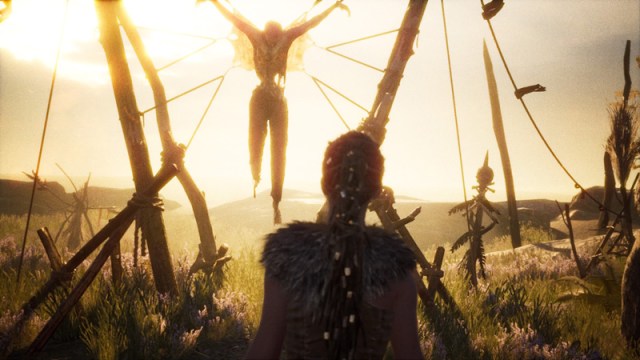 …and also so much gore! Sometimes both at the same time!

And what is Hellblade’s narrative? Well, you play as Senua, a young Celtic warrior on a quest to free the soul of her dead lover, Dillion, from the Old Norse underworld of Hel. But Hellblade is also not about that at all, because Senua is in the middle of a psychotic episode triggered by a pair of traumatic events. She sees things that aren’t actually there and hears voices chattering inside her head, sometimes in a nearly constant stream. Nothing is really straightforward about her journey at all. 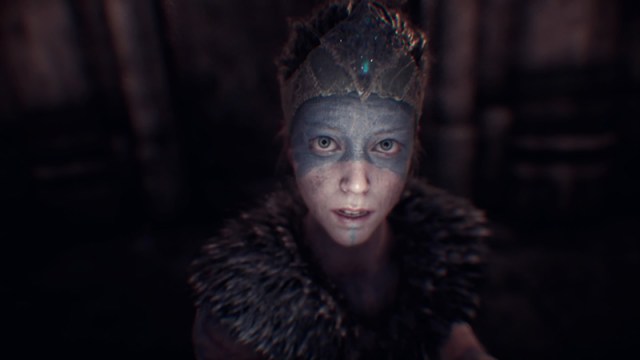 The team at Ninja Theory worked with mental health academics as well as with people who have experienced psychosis to bring the story to life. The symptoms of Senua’s mental illness inform almost all of the game’s mechanics and puzzles. To get through a locked door, Senua must use her “focus” to see naturally occurring runes in her surroundings that match the shape of the runes on the door. Her enemies appear randomly from wisps of smoke, and after the fight they disappear into the ether again. Were they ever even there at all? 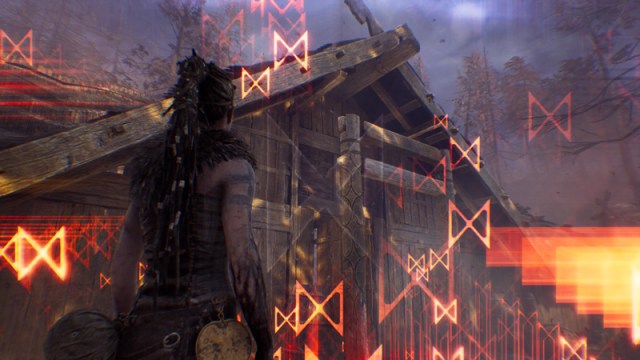 I’ve never dealt with this particular type of mental illness, so I can’t say whether their depiction of psychosis is accurate. What I can say is that experiencing Senua’s symptoms kept me off-balance and tense throughout the entire game. I wasn’t sure if I was on the right track to complete a level, and I rarely had any concept of how much farther I needed to go. In fact, I kept thinking the game was “about to end” for almost the entirety of the last four hours of my playthrough. I was terrified to make too many wrong moves for fear of the permadeath promised toward the beginning of the game (more on that later).

Even though all of those elements combined to create dissonance, the chorus of voices in Senua’s head were the most jarring part of the game for me. They belittle and doubt Senua at every turn, constantly whispering “she can’t do it” or “she’s going to die” or another one of any number of equally disturbing sentiments. The sound for the game was recorded using binaural audio, so the voices really do feel like they’re coming from all around you. (Play with headphones on if you can.) I’ve never heard actual voices in my head, but I can definitely relate to feeling like my own worst enemy. I snapped at the voices to shut up more than once. For me, a person who has never experienced psychosis, these things all heightened my senses in a way that felt scary, but still exciting — it wasn’t entirely unpleasant by any means. A reviewer at Polygon who shares some of Senua’s symptoms, however, described her playthrough as “tortuous.”

I’d manage parts of chapters before having to abandon it for a walk around the block … For me, a game like Dark Souls is tense and stressful. Hellblade is something different entirely. I screamed and shouted. I went through a series of symptoms (dissociation, derealization, panic attacks, acute hypervigilance, unshakable feelings of dread).

There’s a moment in the second half of the game when Senua holds up a mirror and you realize that her mouth is moving, even as the words are being spoken by a different voice — deep, booming, and ominous — that has been ostensibly taunting her from the underworld for a while. It shocked me. Because even though I knew or assumed that it wasn’t actually happening, it was still jarring to see the proof. The game moves on from that moment very quickly, but I really wish we had seen more of Senua’s reaction to seeing herself in the mirror. It felt like a missed opportunity for a turning point in her journey.

And then there’s the issue of the “rot.” Early on, Senua loses a fight to some of those magically appearing enemies I mentioned earlier. The game forces you to fail here in order to introduce what becomes a pretty central idea: Senua has become infected with a “rot” in her arm and, if you die in battle, that rot will spread. If the rot reaches Senua’s head, “her quest is over and all progress will be lost.” 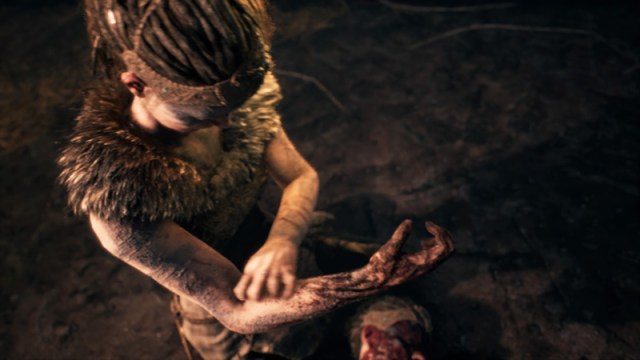 This threat of permadeath really stressed me out as I played, but now I’ve learned that it might all be bullshit. Which, if that’s the case, what the fuck? I do not understand why Ninja Theory would make very specific claims about how their game works and then not follow through on it. Not only is it disingenuous, but, practically speaking, it seems like it was pretty easy to disprove. What I initially thought was a very cool feature, is now something that’s left a sour taste in my mouth since finishing the game. Was this just a gimmick they thought worked well with the theme of reality vs. illusion? If that was the intention, I don’t think it worked here.

Hellblade certainly isn’t the first game to incorporate mental illness into the narrative. While most games that deal with mental illness do so as a way to explain things like a villain’s most erratic and terrifying behavior or justify an in-game mechanic like a “sanity meter” there are a handful of games that actually put you in the shoes of the protagonist as they try to manage their symptoms. Spec Ops: The Line examines PTSD, Sym is a social anxiety platformer, Actual Sunlight, The Cat Lady, and of course Depression Quest explore major depressive disorder. One of the things I’m drawn to most about video games is their ability to build empathy. And I guess in a sense Hellblade is successful. I have now seen how the symptoms of psychosis can affect a person in a little more of a first hand way.

But mental illness is more than a collection of symptoms, and I don’t think the game fully recognizes this. Senua is isolated throughout her journey; we only see how her psychosis affected the people around her in quick snippets of flashbacks. That means we’re missing a whole lot of Senua’s lived experience, so it’s difficult for her to feel like a completely realized character.

I didn’t get the impression that the game was relying on cheap tricks to make you, or Senua for that matter, fully believe in any illusions of reality on her quest. Senua is aware that she hallucinates and has been dealing with her mental illness for most of her life. She knows that the voices tearing her down aren’t “real” in the literal sense, but she isn’t able to tune them out or ignore them. You can see — and feel — her anguish as she tries to keep battling onward.