Generally, the SPLC’s listings of these groups is based on their propagation of known falsehoods — claims about LGBT people that have been thoroughly discredited by scientific authorities — and repeated, groundless name-calling. Viewing homosexuality as unbiblical does not qualify organizations for listing as hate groups. 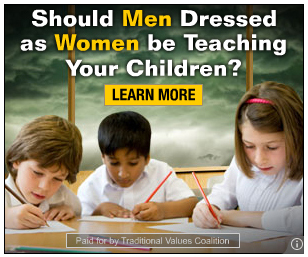 According to the SPLC, the groups on the list are especially problematic because the “facts” they spread about gay people are a. obviously wrong and b. frequently picked up by politicians and media, giving the groups influence beyond what their size would suggest.

Here’s some highlights from this year’s list, with especially exciting passages pasted for you here. You’ll have to read the whole thing to see them all.

[Abiding Truth Ministries founder] Scott Lively is best known for co-authoring, with Kevin Abrams, The Pink Swastika: Homosexuality in the Nazi Party. The book makes a series of claims that virtually no serious historian agrees with: that Hitler was gay, that “the Nazi Party was entirely controlled by militaristic homosexuals,” and that gays were especially selected for the SS because of their innate brutality.

Americans for Truth About Homosexuality

AFTAH is notable for its posting of the utterly discredited work of Paul Cameron (of the Family Research Institute), who has claimed that gays and lesbians live vastly shorter lives than heterosexuals… [and] claims that gays and lesbians in Norway and Denmark live 24 fewer years than heterosexuals… LaBarbera himself, in 2002, compared the alleged dangers of homosexuality to those of “smoking, alcohol and drug abuse.” Similarly, AFTAH’s website carries essays describing homosexuality as a “lethal behavior addiction,” a “dangerous” practice that is “neither normal nor benign.”

Joel McDurmon, the group’s research director, agreed that the Bible does call for killing homosexuals. And, he said, “when most of a society is Christian, is biblical, then it [execution of gays] is perfectly normal; it should definitely be in place.”

In an especially nasty 1989 edition of a CRM newsletter, Kennedy ran photographs of children along with the tagline, “Sex With Children? Homosexuals Say Yes!” 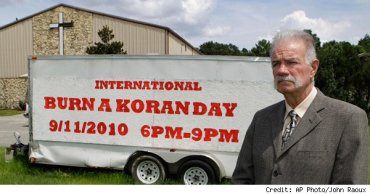 “[Leader Terry] Jones… surrounded Dove with signs aimed at Craig Lowe, a Gainesville city commissioner who was running for mayor, that said “No Homo Mayor.” After an electioneering complaint was filed with the IRS (nonprofit churches cannot intervene in political campaigns), Jones had the signs shortened to the more generic “No Homo.”

[Leader Stephen] Anderson brought his church national notoriety in August 2009, when a member of his congregation, Christopher Broughton, went to an Obama appearance in Phoenix legally carrying an assault rifle and a pistol… two weeks later, he told openly gay columnist Michelangelo Signorile that he “would not judge or condemn” anyone who killed the president. Then, for good measure, he told Signorile at the end of the interview, “If you’re a homosexual, I hope you get brain cancer and die like Ted Kennedy.”

“[Founder Paul Cameron’s released a pamphlet] asserting the primary activity of the gay rights movement is “seeking to legitimize child-adult homosexual sex.” In another, he claimed that with “the rise of the gay rights movement, homosexual rape of men appears to have increased.” In yet another, he wrote, “Homosexuals were three times more likely to admit to having made an obscene phone call” and “a third more apt to report a traffic ticket or traffic accident in the past 5 years.”“

“During legislative testimony supporting the amendment [of the 1996 statute that would’ve required parents be notified of any GLBT issues discussed in schools], Camenker falsely claimed that no homosexuals died in the Holocaust and that the pink triangle the Nazis forced imprisoned gays to wear actually signified Catholic priests. The amendment did not pass.”

For total awareness of your homosexual involvement with the Nazi party, check out the SPLC’s website.

Earlier this week, representatives from Coral Ridge Ministries, the Family Research Council, Concerned Women for America, and the Christian Anti-Defamation Coalition responded to the designation in World Net Daily, an online source known for its own anti-gay ideology (writers on the site have called the gay community the “sodomy lobby” and argued in favour of Uganda’s bill to execute gay people). Robert Knight, from Coral Ridge Ministries, called the report a “smear” and said the SPLC had committed “a very hateful act.” Wendy Wright, from Concerned Women for America, accused the SPLC of “hate and bigotry.” While the groups have expressed outrage over being named in the report, none have denied the claims directly.

“The Left’s smear campaigns of conservatives is […] being driven by the clear evidence that the American public is losing patience with their radical policy agenda as seen in the recent election and in the fact that every state, currently more than thirty, that has had the opportunity to defend the natural definition of marriage has done so. Earlier this month, voters in Iowa sent a powerful message when they removed three Supreme Court justices who imposed same-sex marriage on the state. Would the SPLC also smear the good people of Iowa?”

Perkins also demanded an apology from the SPLC for “this slanderous attack and attempted character assassination.”

The report from the SPLC emphasizes that the groups it names are listed as hate groups because they are knowingly lying and spreading demonizing propaganda about gay people, and not for their views on homosexuality. However, so far, none of the groups named have responded to that claim specifically and have instead focused directly on the “hate group” designation, saying that comparing innocent traditional-value-upholding groups such as themselves to racist organizations is wrong. This is unsurprising as generally these groups seem capable of manipulating large groups of people using simple wordplay, a strategy evidenced by Sarah Palin’s candidacy.

Brian Brown, the president of the National Organization for Marriage, which the report lists but does not call a hate group, also responded:

“Gay marriage now serves as the tip of the spear to a new campaign to demonize and generate hatred against those who adhere to traditional views of sex and marriage. Regular readers of NOM’s work know how we characterize gay people: those who support our vision of marriage, we welcome to join our work. For gay marriage advocates (the majority of whom are not gay) we say: we think you are wrong, and we will fight for our right to vote for marriage in the public square.”

Brown also emphasized that he was concerned about “all the actual hate groups out there.” While NOM was not actually labeled a hate group directly, it is listed as an anti-gay group for a lot of reasons, such as supporting Prop 8 and calling this year’s Boston Gay Pride events “depraved” and the attendees “obviously disturbed, dysfunctional, and extremely self-centered people whose aim was to push their agenda.” NOM, of course, is agenda-free.