When Jane Friedhoff and Ramsey Nasser walked into a game jam with the theme “waves,” neither one could ignore the world burning down around them long enough to adhere to it. Friedhoff is a queer Jewish game designer whose work we’ve covered on two other occasions. Nasser hails from just outside Beirut. And both of them had watched video footage of Richard Spencer getting punched in the face more times than they could accurately count. Nasser began to make a mood board with images of protest important to him.

mood board for the game @JFriedhoff and i are making pic.twitter.com/ODEA8Ae5yE

Friedhoff added more photos, and then they arrived at this iconic image: 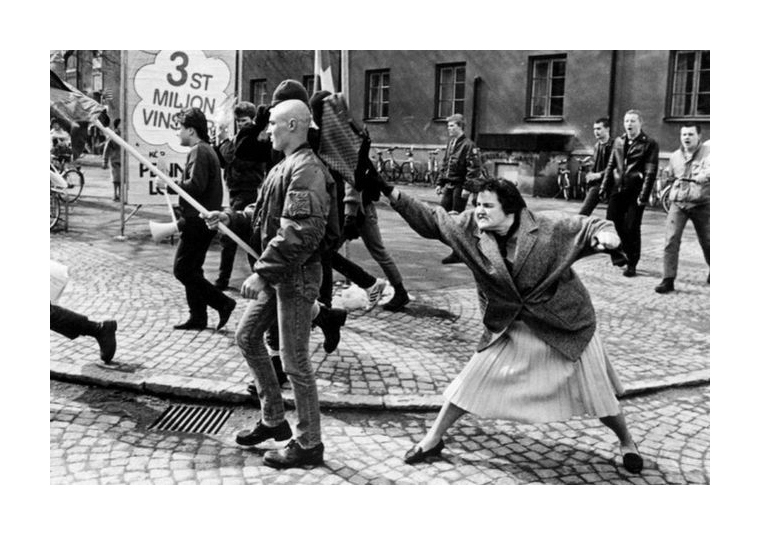 The woman with the handbag, taken by Hans Runesson in Sweden, 1985. She is hitting a neo-Nazi with her purse. I do not know a single person who does not love this photo. “This is violence,” says Friedhoff, “but it’s violence that feels cartoonish and gleeful, rather than angry and vulnerable.” This was the fantasy world they wanted to engage in while making their new game. And they didn’t care that they were off theme. They didn’t care that Friedhoff left to go to the Women’s March and then came back and worked until the deadline without sleeping. They didn’t care because Handväska was born.

The premise is simple. You have fifteen seconds to take out as many Nazis as you possibly can with your handbag. That’s it. That’s the whole game. And it is wildly satisfying. Or it would be if I weren’t comically bad at it—I haven’t broken 60% of the fascists in the town square. But even then it’s still pretty satisfying. The people are all built like legos. And much like legos, sometimes their heads pop off. “The ‘physics engine as power fantasy’ is an amazingly effective strategy,” Nasser says. “Things move just real enough to register, but it’s exaggerated enough to read as physical comedy.”

Because that’s part of the point, the physical comedy. While we were chatting about the game and the process, Friedhoff made a comment that really stuck in my ear. “It was super fucking fun to be, like, yeah this queer Jewish woman and Lebanese man are gonna take a stand against nazis together,” was how she started. But she finished with, “whatever stand a game can take, I suppose.” I told her I didn’t understand. That I’d seen a fair amount of resistance from the indie games community. Remember the Good Bundle? So I asked what role games could play in the resistance. And that’s when the conversation went next level.

Friedhoff has actually written about that before, and she had a lot to say about the subject when we spoke:

“I, personally, get self-conscious talking about this like it’s so powerful. I have lawyer friends who are booking it down to JFK as we speak to make sure people don’t get deported.[…] but you’re right, it’s a big deal. and I do think it’s possible. I think my favorite protest/resistance games are those that cast you as having some new power that you, as a marginalized person, wish to have. […] as our power is taken away, we need more avenues to experience it vicariously. And apparently the power Ramsey and I both wanted that weekend was to punch Richard Spencer in his stupid fucking face.”

Nasser had other thoughts:

“I grew up playing games where Arabs are always the bad guys or the Middle East is depicted as a bombed-out hellhole. […] If every form of culture you consume has people you identify with as villains, that chips away at your sense of self-worth and humanity over time. Handväska is a fantasy about not being pushed around by fascists, about being able to swing your purse and shake up the world. If it can make people feel like they’re not alone, like they’re not weak, like they’re not doomed, then that’s a form of resistance for sure.”

I have other, different thoughts on playing through the resistance, ones that interlink with ideas of fantasy and power. Yesterday, after Betsy DeVos got voted out of committee, I cried. I cried a lot. I felt powerless and stupid for having hope. And then I hit some virtual nazis with a handbag, and damn did I feel better. Maybe if I play Handväska a few more times, I’ll be better equipped to fight again in the real world, to try to punch nazis with my brain. Through all this struggle, through all this fighting, we cannot forget to play. Or we will burn out.

Handväska is sliding scale with a suggested price of $3. Friedhoff and Nasser decided on their first beneficiary, the Southern Poverty Law Center, before the Muslim Ban occurred. After the Muslim Ban went into effect (and after the game hit $500), the duo switched to CUNY-CLEAR, a law clinic directly addressing “the unmet legal needs of Muslim, Arab, South Asian, and other communities in the New York City area that are particularly affected by national security and counter-terrorism policies and practices.” This is a win-win scenario: spend dollars on game, dollars go to help communities directly affected by fascist policies, hit virtual fascists with handbag. Now if only I could win the actual game, that’d be real sweet.

Do you have an idea for Queer Your Tech? We’re currently accepting pitches from everyone with something smart to say about technology, and specifically looking for pitches from people of color. I’d love to see some posts about camera technology, the intricacies of rooting an Android phone, software roundups for Windows and Linux that address a currently relevant theme, essays musing on the intersection of technology and [insert literally any other thing here], Arduino programming, drone building and flying—you name it, I want it. Please email any pitches to ali [at] autostraddle.com. Please include the phrase Queer Your Tech Pitch in your subject heading.