This is a Good Trouble season 3B premiere recap. Spoilers below. 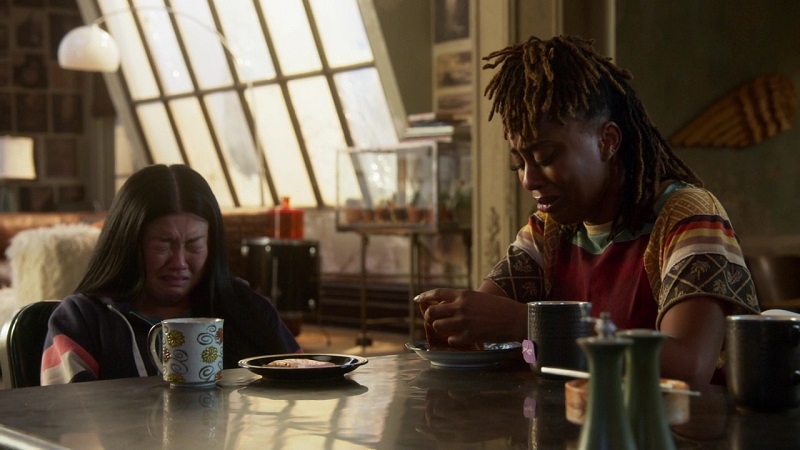 As soon as we step into the Coterie, the heartbreak that the first half of Good Trouble‘s third season wrought is etched on the faces of our protagonists. One by one, over the dulcet sounds of Eric Carmen’s “All By Myself,” the women settle next to each other at the kitchen table and weep. Malika’s upset because her interest in polyamory — and, specifically, a relationship with Isaac and Dyonte — has left Isaac (possibly) disinterested in continuing a relationship with her. Davia’s upset because, just as she’s starting a new relationship with Matt, Dennis reappears, declaring that she’s his light. Mariana’s upset because she’s torn between Evan and the girls in the Byte Club. And, of course, there’s Alice, who walked out on a potential career-making opportunity and a potential relationship. Everyone’s crying and everyone’s miserable.

Well, everyone except for Callie, who skips up to the table, wishing everyone a good morning. Maia Mitchell’s Aussie accent slips out as she greets the other residents and it only serves to make her seem more bubbly by comparison.

Malika and Alice opt to spend the day commiserating together. We’ve gotten hints of the depths of Malika and Alice’s friendship throughout the series but we rarely get to see them spend one-on-one time together, so I relished this episode. Malika laments that she’s still hasn’t heard from Isaac. Alice reminds her that his silence means that their relationship isn’t over unlike her relationship with Ruby which, almost certainly, is dead in the water. She recalls Ruby stopping by her loft after she’d walked out of the CBTV workshop. She was so impressed by the courage Alice displayed by standing up for herself — it’s true, Alice has never been sexier than in that moment — and now she’s sure: she wants a relationship with Alice. But despite this being the very thing she’s wanted since she met Ruby, Alice stands up again and says no. 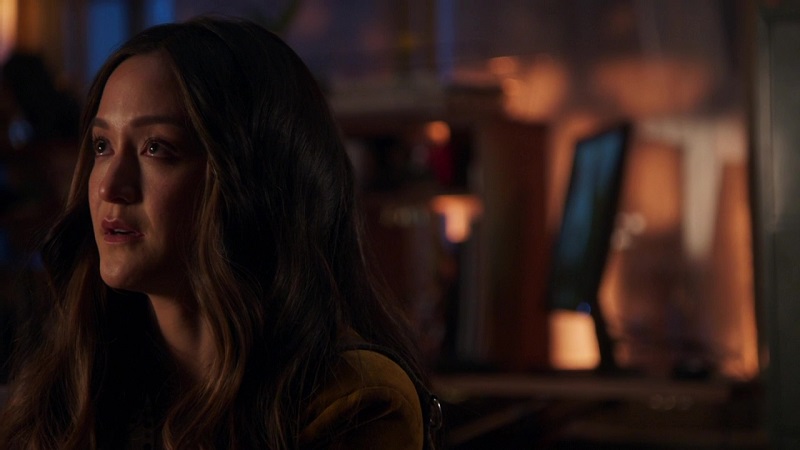 “I didn’t just stand up for myself today, I stood up for all of us who’ve been called ‘diverse’ instead of our names… you know, valued for the optics we bring and not what we bring to the table… and I can’t believe I was standing alone. So I’m sorry but I’m not impressed with you and I can’t be in a relationship with someone who only has my back when nothing’s at stake,” Alice explained to a teary-eyed Ruby.

Malika assures Alice she did the right thing and the pair decide the sooth their broken hearts with edibles and a movie marathon. After Jerry McGuire concludes, Malika points out the parallels between Jerry’s story and Alice’s: both took a moral stand and walked out on their jobs. Malika stresses the that “It only takes one voice, at the right pitch, to start an avalanche,” which doesn’t sound that appealing to a stoned Alice (snow cones, however, sound delicious). Alice brushes aside the advice and looks for a movie that might address Malika’s situation but she’s convinced that no such movie exists.

“There is no movie where the heroine kisses two guys at the end. She doesn’t make it to the top of the Empire State Building and find two men waiting for her, totally down with the idea of sharing her in a complicated, yet open and mutually respectful way,” Malika admits.

Alice reminds Malika that Isaac loves her and that he’ll understand that this is something that she has to explore. But before they can delve into the foreign films section to find a movie with that message, they’re interrupted by a thud at the window. They tentatively (and hilariously) approach and discover that a bird has crashed into the Coterie window. Alice and Malika take the bird to the Coterie rooftop and compare reflect on how they’re like this little bird: sailing along happily — in a relationship or on a great career path — until they ran right into a closed window. But, as it turns out, the bird wasn’t hurt, just stunned, and when it recovers, it flies away. Alice and Malika are overjoyed — again, the scene is far funnier than I can do justice — and as they encourage their feathered friend to soar higher, Malika has an epiphany. She surmises that the bird was a sign and Alice sees the parallel too: they can get knocked down but, like the bird, they can get up again. The realization sends Alice and Malika back down to the Coterie kitchen to toast their realization some liquor and dance it out to Chumbawamba’s “Tubthumping.”

But just as they’re settling into their groove, Ruby interrupts with some news: Margaret Cho gave an interview to The Hollywood Reporter about the CBTV program and spilled all the tea. The story compelled the network to do a complete overhaul of the program, including firing Scott and allowing the talent to lead on creating sketches. Turns out, Alice was that voice, with the right pitch, and she started a much needed avalanche. Ruby invites Alice to rejoin the program. But does the open invitation mean that Alice is just going to return to the CBTV diversity workshop unscathed? Not exactly, according to Good Trouble Executive Producer Joanna Johnson.

And, in addition to walking back into these tension filled relationships with her fellow comedians and Ruby, Alice is also committing to a program that’s just decided to change. After years of accepting kudos for their diversity showcase while simultaneously forcing these comedians from underrepresented communities into portraying stereotypes, the CBTV program is undergoing change but Johnson warns that it won’t happen overnight.

“The program itself isn’t just the problem,” Johnson said. “It’s the whole network, it’s the hierarchy of it all. And so, there’s going to be new challenges going forward.”

Since its premiere episode, Alice’s evolution on Good Trouble has, perhaps, been the most defined: she’s gone from this closeted, mousy manager, going out of her way to avoid conflict — be it, with her parents, Sumi or the Coterie residents — to someone who’s unafraid to stand up for herself and speak her mind. We’ll get to see more of that in the remainder of season three, Johnson promises, both in the CBTV program and at home.

“There’s an upcoming episode this season where they do a Lunar New year Celebration at the Coterie, where [Alice] continues to try to learn to speak up,” Johnson spoils. “Everybody’s trying to find identity, but she also talks in this upcoming episode about how hard it is to know to be an American, a Chinese American. Are you American? Are you Chinese? Where do you fit in into this country? And how do you do both?”

As someone lives at the intersection of many identities, I can’t wait.

+ Isabella is pregnant…and moving into Gael’s loft at the Coterie after being cut-off by her family. I’m interested to see how this impacts Gael’s relationship with Callie, of course — I cannot imagine them staying this amicable for long — but also how his family reacts.

+ After Ruby’s arrival, Malika retreats to her loft to sober up for her call with Isaac. Unfortunately, she doesn’t get the news she wants to hear. Despite her assurances that she just wants a relationship with him, Isaac can’t just forget her interest in a polyamorous relationship with Dyonte. He’s leaving the country for six months and thinks they need time and space apart to process everything. What does this mean? Are they still in a relationship? Is she free to hook-up with Dyonte if she wants? These are questions that need answered!

+ The straights really let me down this week on Good Trouble because not only did Isaac and Malika maybe break up, Davia pumped the brakes on the quick romantic reunion with Dennis too. He said all the right things, at first, but when Dennis lets it slip that he knew about Matt before coming back to the Coterie, Davia is (rightfully) incensed. He didn’t come back for her, he came back because he knew she might be moving on and he just couldn’t abide that. The admission puts a kibosh on the Denvia ship finally sailing…Dennis is going to have to prove his love to Davia if he wants her in his life.

+ Mariana and Evan’s relationship doesn’t survive the Good Trouble midseason premiere either: her revelation that she’s Evan’s girlfriend doesn’t deter the Byte Club from wanting to go ahead with their lawsuit. Mariana shares the news with Evan who worries that a discrimination lawsuit would hurt Speckulate’s forthcoming IPO. While he’s content to privately back the Club’s Bulk Beauty app, Mariana and the girls are clear: they don’t want to be in business with Evan Speck. Forced to choose between her boyfriend and her friends/business partners, Mariana chooses her friends and tips them off about the IPO. She encourages Evan to settle, which he does, but grows tired of constantly having to push Evan to do the right thing and ends their relationship.

Mariana thinks that should be the end of it — she’s done with Evan, they got their settlement and now they can move on — but her friends/business partners don’t agree. They accuse Mariana of only doing the right thing when she has no other option (much like Evan) and kick her out of the Byte Club.

Johnson explains, “[Mariana] wants to have her cake and eat it too. She’s growing up. She’s realizing when you do that, what happens sometimes is there’s no cake. You lose your cake. And you lose everything. And it was about time for Mariana to have that comeuppance and to grow up…That’s what they’re all trying to do on the show. They’re all trying to figure out adulting.”

Next Week: What’s next for Mariana? A new job…with Callie?! Oh, this is going to go great.