Last year, as I transitioned from working in a bustling office to working from home, I decorated my new work space with reminders to keep some time for myself. I couldn’t leave work at work anymore so I had to make sure that I was creating healthy boundaries between my work life and my personal life. To remind myself, I affixed a quote from Brene Brown to my bulletin board — “Daring to set boundaries is about having the courage to love ourselves, even when we risk disappointing others” — and challenged myself to live up to the mantra. And while my level of success in that regard is debatable, I’ve seen that quote often enough now that the quote popped into my head as I was watching last night’s Good Trouble. 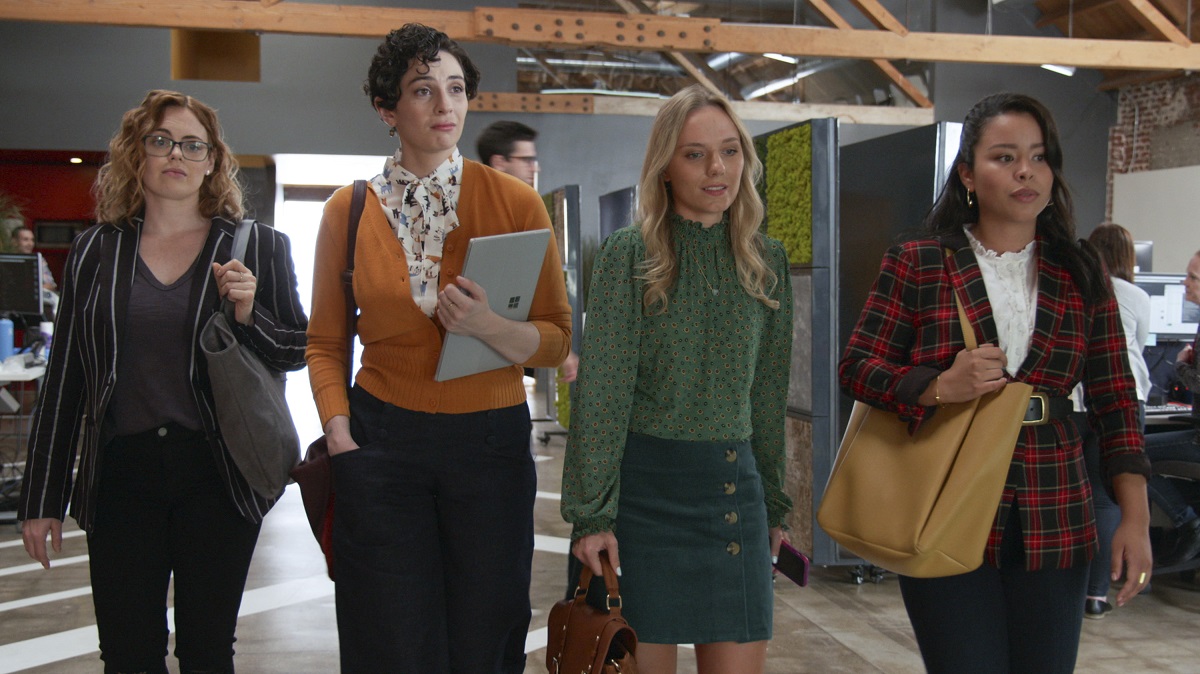 Last we visited with Mariana, she and her all-girl team (AKA the “Byte Club”) packed up their stuff and left Speckulate, after a band of white supremacists overran their ACT-ivism app and the company refused to take action to counteract them. The Byte Club decides to forge ahead on their own, developing an app for an upcoming open pitch event at a tech incubator.

Rachel proposes an eco-friendly bath and beauty product delivery app called Bulk Beauty and the idea excites all the girls. But Mariana hasn’t left everything from Speckulate behind — her relationship with Evan survives her departure, though he remains a secret to her club-mates — and he advises her to start with something small, instead of pitching a really huge idea out of the box. Since Evan’s a CEO of a really successful company, Mariana takes his advice and steers the Byte Club away from Bulk Beauty and towards creating the next Candy Crush. And when Evan recommends that she maximize the app’s potential earnings power by adding in-app purchases, she brings that idea to the Byte Club too.

But Evan’s own history is a little different: he didn’t start small, he started big, pitching an app called Day Trader even though he knew absolutely nothing about the stock market. He pitched the app successfully, though, because men aren’t dissuaded by the things they don’t know. That revelation is buttressed by Alex and Sam, Mariana’s former misogynistic co-workers from Speckulate (and perennial fixtures on our “Men Are Trash (But Sometimes Not)” leaderboard) who are walking out of the tech incubator just as the Byte Club are walking in. Turns out, they’ve successfully pitched an Interior Decorating app for women. It’s a subject they don’t know anything about but they can figure that out later; right now, the goal is to make money and apps targetted at women are more like to do that. Frustrated, Mariana calls an audible: she wants the team to pitch Bulk Beauty instead.

“We’ve all been conditioned not to believe in ourselves — that women can’t be bold, that we have to walk before we can run — but how can we expect anyone to believe that we’re capable if we can’t believe it ourselves?” Mariana asks.

It would’ve been easy to let Mariana succeed here… to let her go into that room, having tossed away her script at the last minute, and win… but Good Trouble opts against it and I’m glad. As much as success defines who we are and who we’ll become, so does failure, especially when you’re in your twenties and especially when you’re a woman in tech and especially when you’re a woman of color in tech. That said, it’s curious to me that, after exposing the pay gap at Speckulate and earning industry-wide attention for their ACT-ivism app, a walkout by all the Byte Club wouldn’t earn some media attention — thus boosting the group’s efforts to find venture capital — or interest from other tech companies.

Mariana makes one change immediately after the unsuccessful pitch meeting: She pledges never to discuss business with Evan again. He can’t not tell her the truth and she can’t resist taking his advice so, instead, they’ll just avoid those conversations in the future. Evan responds to Mariana’s boundaries by establishing a few of his own, in hopes of avoiding triggering his OCD: He asks her to put his things back exactly where she found them and to always wear socks.

“I know that sounds silly, it’s just…. at work, I have to tolerate so many things that are out of my control, like things that cause anxiety and actual physical pain,” Evan explains. “At home, I need order so I can have one place in this world where I feel safe, like how I feel with you.”

It’s a cute moment — BOUNDARY SETTING IS ADORABLE, Y’ALL — but not enough to convince me that this relationship (and Mariana keeping it secret from the Byte Club) isn’t a really bad idea. 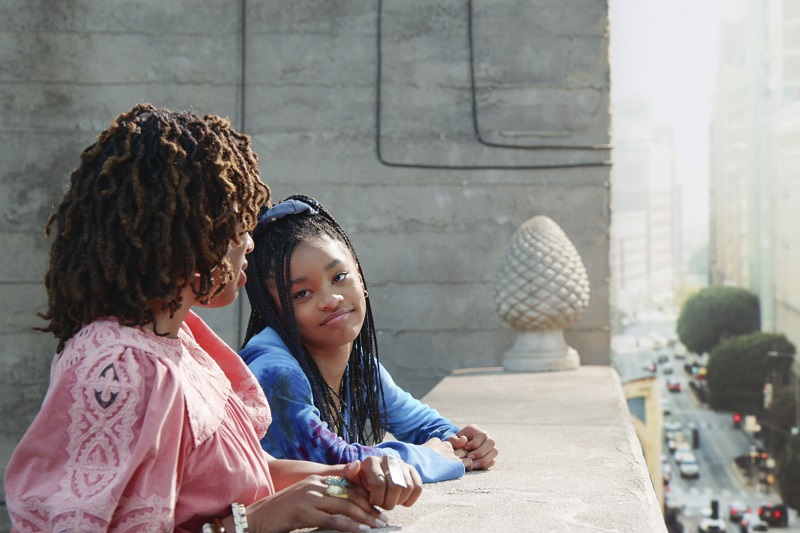 Meanwhile, Malika’s world exists with no boundaries. It’s a common problem for activists: when your work is fighting for your life and the lives of other like you — whether, for example, it’s ending the scourge of police violence on black and brown bodies or ending the epidemic of cis violence on trans women — it’s almost impossible to leave your work at work. Everytime Malika says, “work is my therapy,” my heart clenches a bit… it feels like she’s slipping into a danger zone.

This week, Malika’s friend from lock-up, Yvonne, calls to ask if she can watch her kids for a few hours. Despite having an ongoing competition with Dyonte at work — a competition that could decide which of them earns a full-time job as an organizer — Malika agrees and welcomes Yvonne’s three kids (one insolent pre-teen and two rambunctious younger siblings) to the Coterie. It does not go well. Frustrated, Malika chastises the tween (Kiara) for acting like “a little shit” instead of helping take care of her younger brother and sister.

Later, once the kids are enjoying swimming with Dyonte — who she invited over, partly, to distract from the work competition — Malika approaches Kiara and apologizes. Malika can relate to what’s going through, having grown up with a mother who’s doing the best she can. It’s a significant moment, one that the show brushes past too fast for my taste, that gets at the root of Malika’s trauma and anxiety. Why is she asking Kiara to give Yvonne the grace she never gave her own mother? That, on top of her unaddressed grief over her mother’s death, has Malika heading for a harsh fall.

Another casualty of that fall? Her relationship with Isaac, possibly. All season, she’s enjoyed this flirtatious relationship with Dyonte but, thus far, neither of them have crossed the line. This week, Dyonte reveals that he’s open to the possibility — he’s in a polyamorous relationship — but Malika quickly asserts that she’s in a monogamous committed relationship. In fact, she tells Dyonte, she and Isaac are planning to move in together… only they’re not… Isaac’s therapist agreed with Malika, who had earlier suggested that moving in together would be too stressful for him right now. Despite all Malika’s assertions, though, Isaac senses something’s brewing with Dyonte and urges Malika to call him next time when she needs help.

This is what I get for shipping straight people, y’all.

+ One of the things I’ve talked about since Good Trouble‘s debut is its propensity — like The Fosters before it — to “[endeavor] to tell more stories than the show has time to tell well” and that habit reared its head this week. Gael, once again, got short-shrifted as we heard more about his new internship than we saw.

But also? The jam packed episode meant that the weight of Malika’s conversation with Kiara wasn’t felt and we didn’t get to see Dennis react to Davia’s admission that he’d hurt her deeply when he left so abruptly.

+ Speaking of Davia, her storyline in this episode was great. It’s hard not to let your personal life bleed into your professional one sometimes and Jessie’s insult caused her to lash out at her students. After a pep talk from Gael (and her former self), Davia regains her confidence and apologizes to her students for meeting aggression with aggression.

+ Last year, pre-pandemic and before Good Trouble‘s second season finale aired, news broke that Beau Mirchoff would be promoted to series regular for the show’s third season. Naturally, I’d assumed that this meant that Callie’s break-up with Jamie wouldn’t stick and the pair would find its way back to each other. Sufficed to say, I was shocked when, instead, Jamie walked into the conference room and announced that he was the new Deputy District Attorney (DDA) overseeing the Yvonne Byers case. Not quite as shocked as Callie, though…

+ Admittedly, Callie is not my favorite Good Trouble character. What’s always been disconcerting to me is how she consistently escapes consequences for the actions she takes, even as the lives of those around her are upended. This week, I was both glad to see Callie push to ensure that Jared (or his sister) knows about the deal that’s being offered — which lawyers are ethically bound to share — and for Kathleen to threaten her with real consequences if Callie ran afoul of her again.

Next week: A Conflict of Interests