While watching Good Trouble, it is easy to get wrapped up in the chosen family that’s been forged at the Coterie. It’s easy to get wrapped up in the will they-won’t they of Davia and Dennis or Isaac and Malika being #relationshipgoals. It’s easy to see yourself in Alice’s story of a person navigating what it means to be out or her attempts to break into a new field. Even Gael is interesting sometimes…mostly when he’s around his sister, Jazmin, but his decision to put eschew the security of a full-time job to really invest in himself and his art is highly relatable. It’s easy to get wrapped up in their stories and our connection to their identities. But as distracted as we might get by the shiny new people, the heart of Good Trouble remains the sisters, Callie and Mariana Adams-Foster, who we’ve watched grow up and who came to Los Angeles together to chase their dreams.

Given that, it is perhaps fitting that the heart of this show would re-emerge in Good Trouble‘s Valentine’s Day episode, as Callie returns to the Coterie for an extended visit. 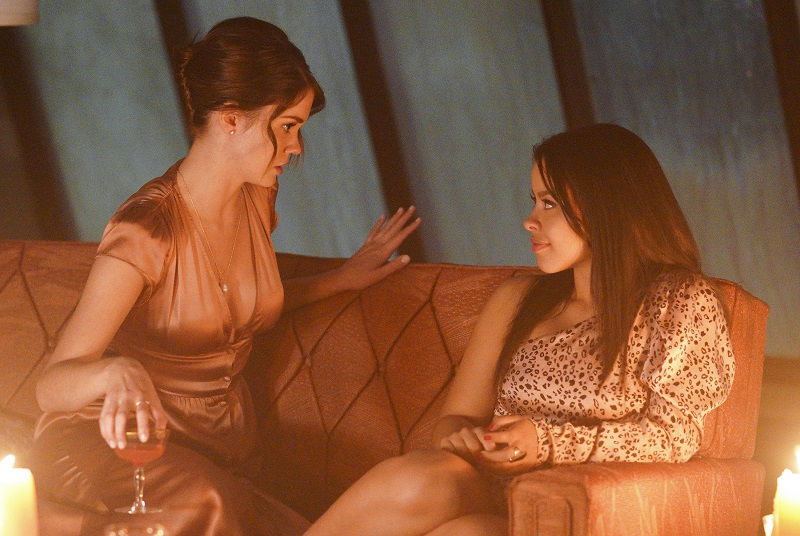 The Good Trouble midseason finale ended with Callie moving out of their shared loft and into her boyfriend’s penthouse apartment. Though they shared a physical space, the emotional distance between them had grown: Callie consumed by her relationships with Gael and Jamie and Mariana building friendships within the Coterie and at Speckulate. The messages in the Coterie group chat — where Davia, Alice, Malika and Mariana share a laugh at Callie’s expense — aren’t themselves a problem, they’re a symptom of the growing divide between the sisters. After an explosive ending to her relationship with Gael, failing the bar and quitting her job as a clerk in Judge Wilson’s office, Callie needed something to anchor her and perhaps, for the first time since they shared a room at Stef and Lena’s place, Callie doesn’t trust Mariana to be that anchor so she leaves.

The move is temporary, Callie assures Jamie — a stopgap measure until she can find her own place — but I take her assurances as “this move is just temporary until I reconcile with my sister.” But that reconciliation doesn’t come: even though they clearly miss each other, the sisters forge on. Mariana finds a new roommate, Isabella, and Callie adds her name to Jamie’s lease, along with an equitable agreement for rent payment. The distance between the sisters is cemented now but still, Callie’s words from the first episode of Good Trouble echo in my head — “we can’t quit. We are Adams-Fosters. We don’t give up. We don’t give in. We fight” — and I still hope for a reunion.

When Callie shows up at the launch party for Mariana’s app, I think things have started to thaw. And, maybe when she ends up at the Coterie for pre-Valentine’s Day date drinks, I start to think that maybe things are getting back on track. But, slowly but surely, the tension seeps back in: Callie discovering that Mariana and Raj have exchanged “I love yous” and she didn’t know, Mariana rushing out of the loft instead of advising Callie about how to thwart Jamie’s forthcoming proposal. A storm and citywide blackout aids Callie efforts but, still, every moment she steals with Mariana is consumed by her nervousness about Jamie’s proposal. It’s not until Isabella uses the details of Callie’s problem as the basis for a “Never Have I Ever” question that the sisters finally have a real conversation about the issues between them.

It is bad. Callie reveals that she saw the text chain between Mariana and the Coterie Biatches thread but denies that it’s the reason that she moved out. They admit that they both felt abandoned by each other: Callie, when Mariana was making fun of her behind her back, and Mariana, when Callie abruptly moved out of their loft. Mariana apologizes for the text chain but Callie dismisses it and the sisters trade barbs…neither prepared to take responsibility for why things didn’t work out.

It’s bad in the way that only fights between family — and particularly, fights between sisters — can be. It’s bad in a way that echoes chapters in my own life…when I tried to bridge the gap between myself and my older sister. We were so different growing up — me, the nerdy tomboy, her the most popular girl in school — and when we’d fight our mother would remind us that we’re sisters and we were supposed to love one another. And, without fail, under my breathe, I’d respond as Callie does.

Callie and Mariana Adams Foster have always been the heart of this show so it’s fitting that they’d be reunited for Valentine’s Day. What I didn’t anticipate — though perhaps should have — was Good Trouble‘s most devastating heartbreak would come from breaking the sisters up.

+ I have personally never done shrooms and this episode of Good Trouble scared me enough to ensure that I never will. Anything that provokes (imaginary) group performances of “Up Where We Belong” and a dramatic reinactment of the lift from Dirty Dancing feels like something I should avoid. Plus, ending up in bed with your ex and the new bae she chose over you? No thanks. Do not want. 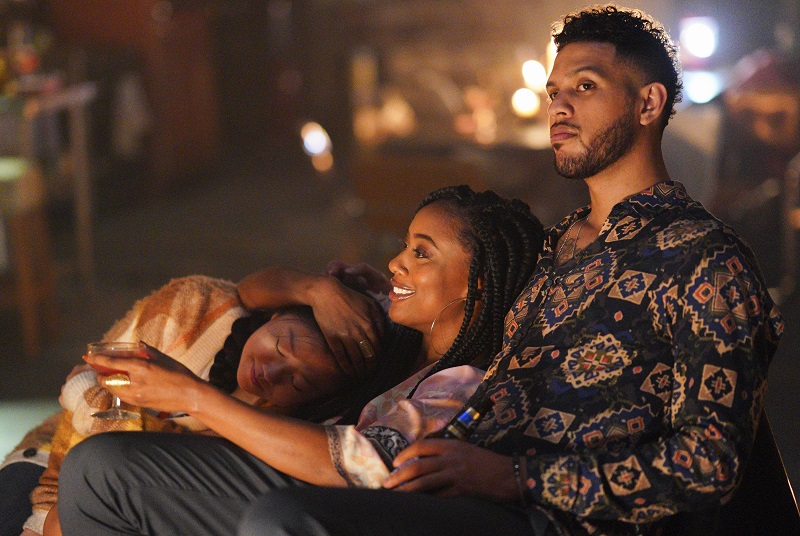 + It’s hard to get me to invest in straight ‘ships these days but Good Trouble has managed to do it, not once, but twice. First, with Isaac and Malika who are the only couple to finish “Palentine’s Day” in a better place than where they started. Not only does Isaac allay Malika’s anxiety by confessing his love, he also opens up about the untreated anxiety and panic attacks he’s had his entire life. The scene with Isaac, in the midst of an attack, crying because Malika has to see him this way…and her just holding him and reminding him that she loves all of him…was just beautiful. They remain #relationshipgoals.

On the flip side, Davia and Dennis end the episode in bed together but not at all in the way that I’d hoped. Thanks to Alice, the captain of the Danis (Devia?) ship, Dennis finally asks Davia out on a date. In advance of their date, he cutely practices how he’ll tell Davia he loves her in the mirror. Davia partying a little too hard and the power outage are enough to derail their outing but it’s Dennis’ grief support group that convinces him not to tell Davia how he feels. They urge him to give himself more time to figure out if he’s having real feelings for Davia or if what he’s feeling is just immense gratitude for how she’s helped him cope. It’s good advice and it all makes perfect sense but, honestly, all I want to do is shout, “KISS ALREADY!” at my TV screen. When did I stop appreciating a good slow burn love story? 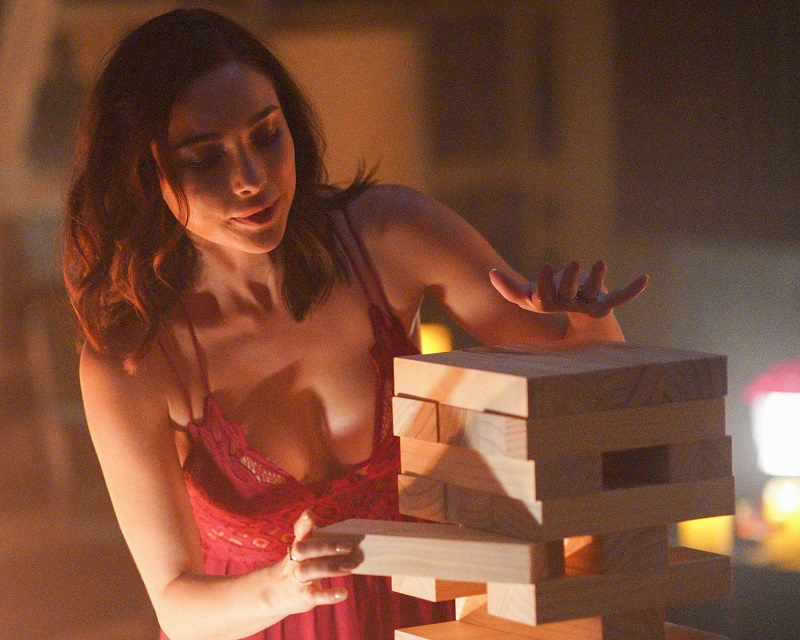 + I felt like my initial judgment of Isabella was a little harsh so I tried to come into this episode a little more open-minded. Some people are just friendly, right? But, nope, I was right the first time: this girl is up to no good and I do not trust her. That lapdance for Raj? A little too much. I just hope she’s not an axe murderer or something.